previous
The something, somewhen News!!
random
next
Fear and Loathing in Birmingham
3148 views 0 likes 0 comments

And now for something completely different. We have a guest review from Trixie. I’ve been meaning to do this myself but I’m rubbish. This was her first attempt at a CCG and the review is from that perspective.Mike B 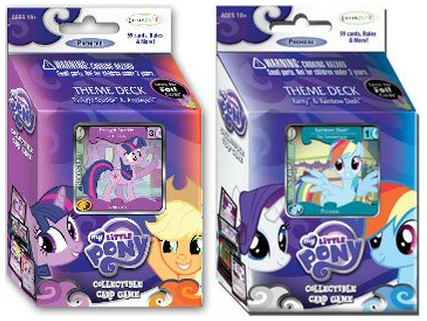 I was a little surprised to find a card game with this particular theme, and after opening the box and flicking through the rule book I began to wonder who exactly it was targeting. Ten year-old girls? or ten year-old girls in 35 year-old men’s bodies? I jest, I jest. I have no problems with bronies, being quite partial to magical flying rainbow unicorns myself. In fact, for the most part I quite admire the staunch rejection of gender stereotypes. As long as they’re not creepers using this phenomenon as an excuse to run around My Little Pony fairs trying to molest little kiddies that is. But enough of that potentially explosive topic and onto the game! Well that got a bit dark, moving on swiftly. 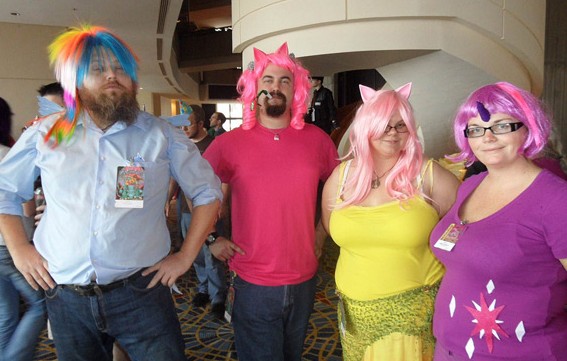 Being given the weighty responsibility of typing up a review for my good friend Mike, I was quite determined to be a good game master and have a full understanding of the rules before I roped my patient Ha! boyfriend Robbie into having a game with me. After about half an hour setting the board up and attempting to read through the rule book, I gave up and quickly dragged him in to help me decipher what SHOULD be a simple game, assuming it is aimed at pony mad kiddies. I was quite disappointed with the fold-up paper mats provided with each pack, nothing frustrates me more than a surface that will not stay flat and cards that do not stay in pretty neat piles I put them in. I suppose you could iron them?

The cards themselves are fairly decent but nothing special. I feel they missed an opportunity making a nice tin box to keep all your cards in and little plastic counters instead of the pop-out cardboard ones provided. You i’m sure will be pleased to know they have since brought out a nice tin to keep it all in. Actually, they could have gone the whole hog and made a bunch of miniature ponies, but I digress. It took a few false starts to get into the game play and we spent more time reading and re-reading the rule book than actually playing the game, well it felt that way anyway. The rules seem overly complicated and the rules very vague for a game that should be aimed at children and presumably new forays into the world of table-top gaming. 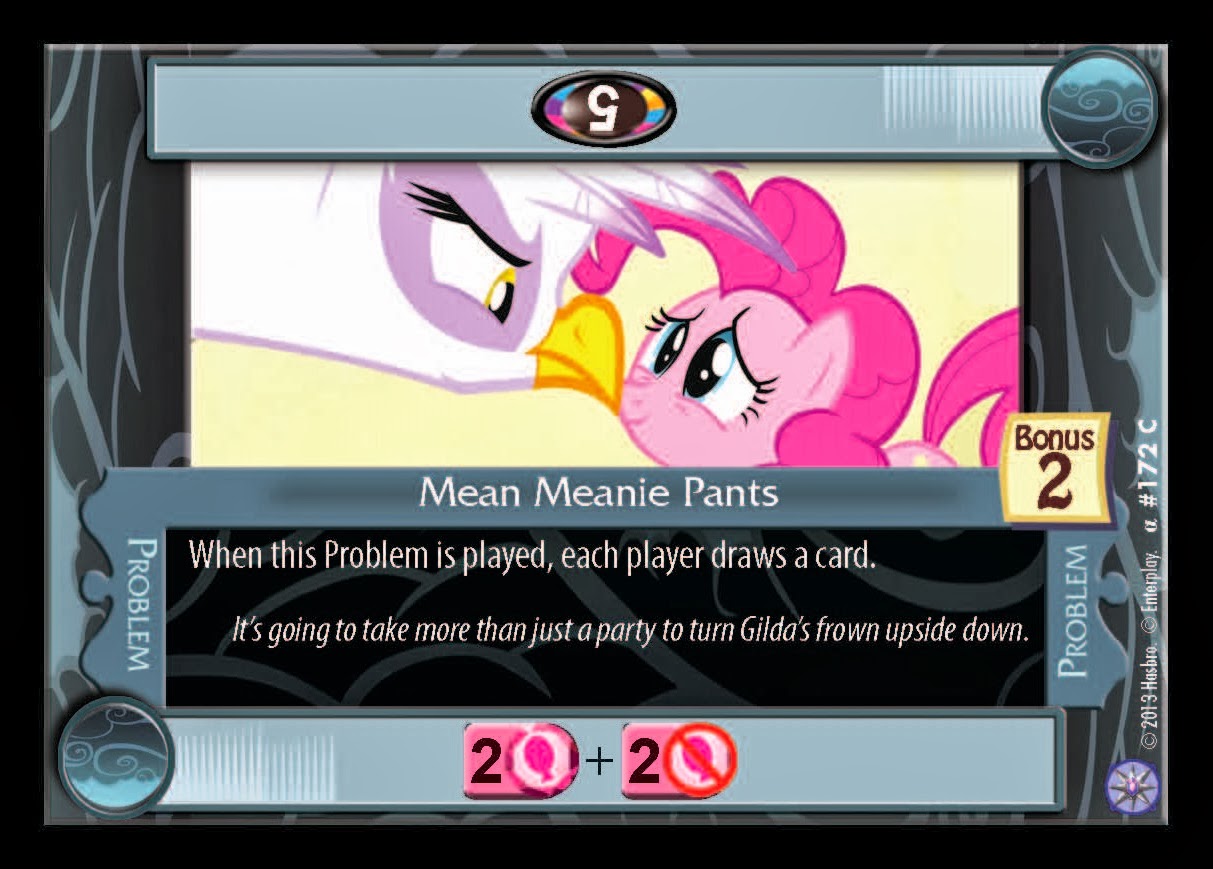 The aim of the game is to solve Problem Cards, either your own or your opponent’s and reach 10 points before they do. You can also use Troublemakers to impede their ability to deal with Problem Cards, which they will have to resolve before being able to tackle the Problem Card underneath. You start off with your character in the Home section of your board and draw tokens, the amount depending on who has the highest score at the end of the last round. Both players draw the same amount of tokens each turn. You can keep your tokens for the next turn if you are unable to use them that round, which is quite lucky as if you are unlucky like I am, you can go quite a few rounds without being able to do a single thing. Which is really frustrating and I feel quite a big flaw in the game play.

You lay friend and resource (which boost powers and give special abilities) cards out in your home area, up to a 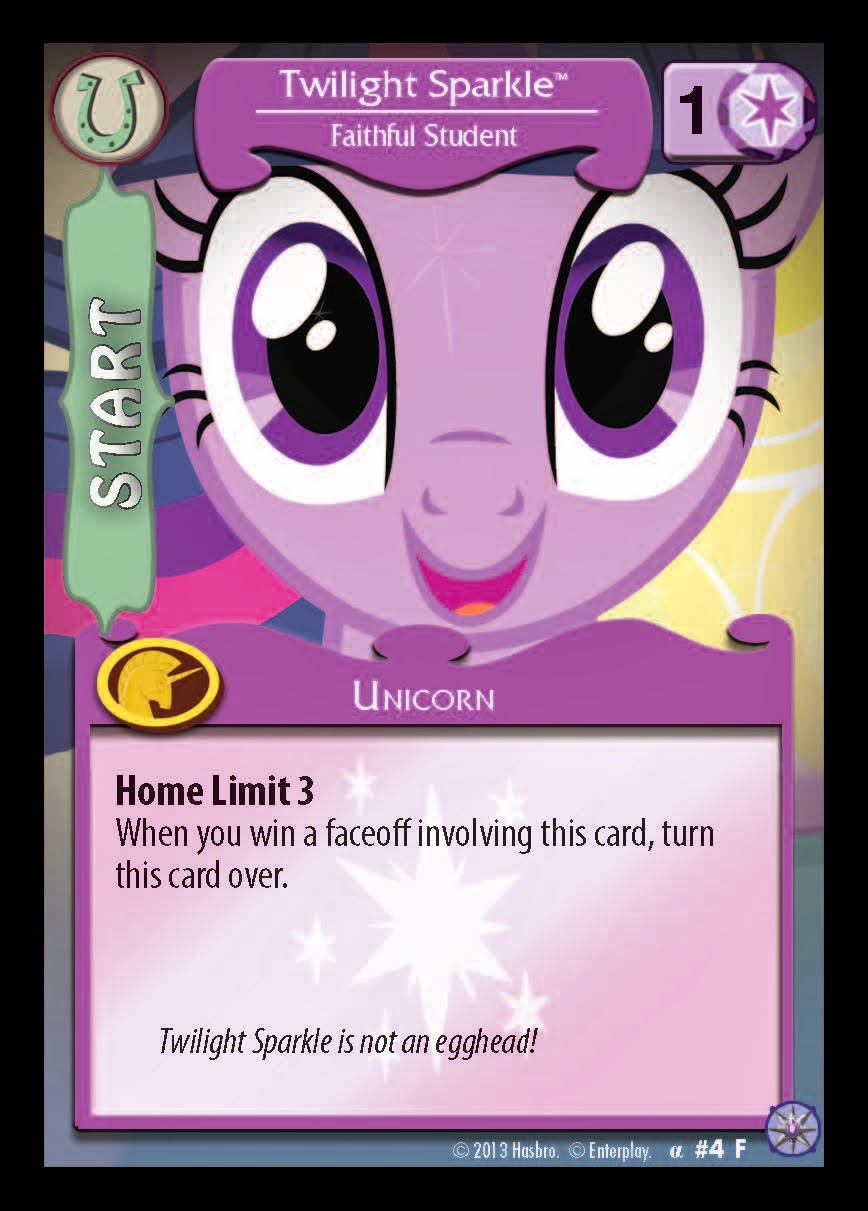 maximum specified by a number on your chosen pony’s card, but you will need, for example, two Generosity (for Rarity) action points and 1 Loyalty (for Rainbow Dash) action point to be able to put stronger friends or resources out on your board. I was playing with Rainbow Dash and went a good six rounds or so without coming across a friend card that had Generosity action points on it and had no special cost or only cost Loyalty action points to play. It is specified in the rule book that the first Problem Card you should tackle should be one that has ‘Starting Problem’ on the card. Just a small note that there are multiple Problem Cards that have ‘Starting Problem’ on them. Getting back to the above, even on the Starting Problems, you need to have, for example, 1 Loyalty action point and 1 Generosity action point in order to be able to resolve the problem. And with my draws, I was not able to do anything but sit on a mounting pile of tokens and friend cards that I did not want to play (as they would not help me solve problems) or could not play. You can tackle your opponent’s Problem Card, while you can have any combination of points, the amount required to do so is often significantly higher than the combination that would be required to tackle your own Problem Card. 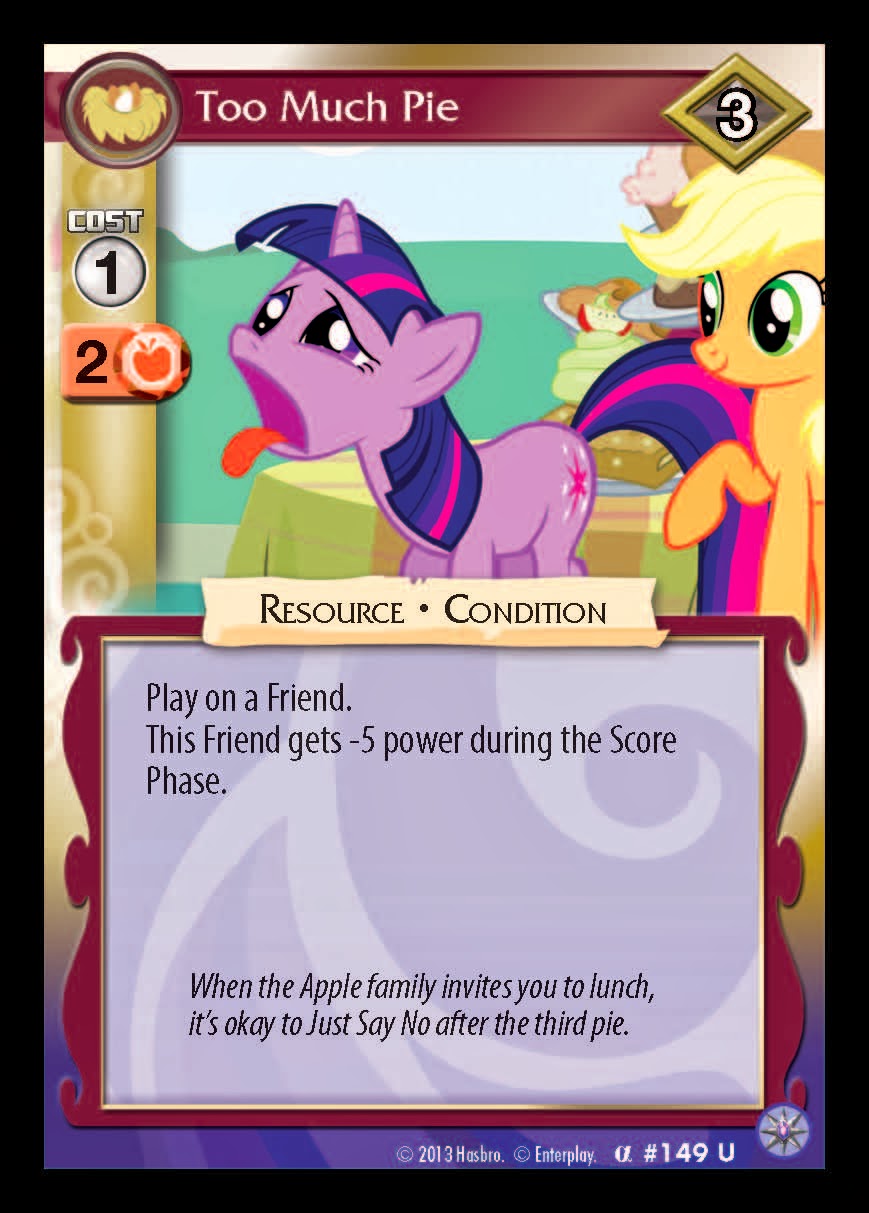 Robbie was having a much better time of it than I was and was able to solve Problem Card after Problem Card while I sat glowering at him impotently. Which brings up another irksome aspect of the game – the whole idea of the show is working together and the power of friendship in overcoming and hardships while this card game encourages you to scupper your opponent’s ability to resolve Problem Cards and at the core level, you are competing against each other. It would have been much more successful and true to the nature of the show as a co-operative game, I could really see one in the vein of Sentinels of the Multiverse – fun and simple to master, with good synergy between the decks, allowing you and your friends to team up to defeat the Big Bad.

Well there you go, anyone on the fence (ponies, fence… don’t bother) might want to consider looking elsewhere for their collectible kicks. My money is still on Marvel Dicemasters hanging around, once they manage to get some more sets out to stores.

Marvel Dice Masters – Avengers Vs X-Men
Be the first to comment!
Leave a reply »