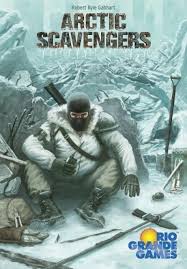 Great mesh of theme and mechanism.
Modular expansions included in base set.

limited card pool, will eventually cause some fatigue if play a lot.

This is still a standout deck builder, the only one still to truly merge theme and mechanism to such a refined point. Well worth picking up if you can and join us in secretly hoping for that promised expansion.

* As an update since posting this review Rio Grande have announced that the expansion will be happening alongside a reprint of the base game, so celebrate people the apocalypse is still on.

In some funky alternative timeline Arctic Scavengers upon release became a roaring hit, ushering in a new age of deck builders and spawned a series of brilliant expansions. So it sucks that we’re stuck here in this poopy timeline where none of that amazingly cool stuff occurred. There’s a depressing history to what occurred behind this games release, I posted an article on it a month ago which you can see here, but I don’t want to linger anymore on that bad mojo so lets focus on the good stuff this game offers.

Arctic Scavengers is a deck builder set in a post apocalypse world trapped in a never ending ice age where bands of ragtag tribes struggle to survive in this unforgiving environment, think of a chilly mad max. You as the player control one of these groups by building your deck from the meager resources on offer in this cold new world.

This game brilliantly encapsulates the frozen environment through the icy blue art palette on the cards, to how it plays, everything you are doing makes sense in context of, and furthers the theme. Whereas most deck builders, even the theme heavy ones that followed on the heels of Dominion (Thunderstone,Legendary) whilst rich in art and story still never get over the clunky mechanisms of the deck builder mechanic, they are forever there drawing you out of the world. That’s where scavengers really hits the sweet spot, everything that you do in the game makes sense in the world it has created.

Lets walk through a round to see what I mean. Once you draw your cards from your deck you will find yourself with options, your hand will normally consist of a scant few members of your tribe and some equipment. You are going to obviously want more, unlike most deck-builders that see you totting up your coins and then browsing the available cards as if in some fantastical supermarket this differs. There is a limited supply of roaming mercenary’s each offering special skills, but you can’t just buy them you need to perform actions to get that currency by hunting. You send out your tiny group into the frozen wasteland preferably equipped with a net and whatever the amount of food they come back with you use to trade with these guns for hire to join your clan.

If you don’t fancy that you can send scavengers or refuges out with shovels to dig in the junkyard. Now this is something new, there is a deck of cards representing this wasteland and devastated cities surrounding your small camp, and dependent on how good your dig skill was for your team you can take that many cards from this deck. Buried among it are all sorts of useful stuff, maybe medical supplies a very valuable resource for recruiting or more tools or if really lucky weapons, of course you might just get a handful of useless junk. Whatever you dig up you can only bring 1 piece back the rest is returned to the pile. This little feature highlights what I was saying above of how the theme and mechanics mesh so well. There is nothing worse than sacrificing a small team to go out as you desperately need more supplies only for them to return empty handed. And as your actions are limited each turn you’ve wasted your time and gained nothing, in the game of post apocalyptic craps you’ve come up snake eyes. 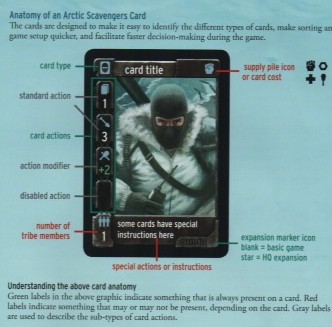 All of that is pretty cool and with the simple iconography of the cards it really is a lot easier to teach then I’m making it sound. But there is an even better aspect to the game that no other deck builder has and adds a whole other level of bluffing and strategy, and more importantly some actual player interaction and the stakes are high. There is another deck the contested resources, these work as both a game timer as once depleted the game ends and the colony with the highest population wins, but more importantly contain some rare and powerful cards. These are worth fighting over and fight you do.

The skirmish phase takes place after everyone has done their resource gathering, each players remaining cards battle it out with the other tribes to take the precious resource. No other deck builder I have encountered has anything like this, it works as a great bluffing stage, because all you know of your opponents is how many cards that they are sending into the battle, for all you know they might be just a bunch of refugees. It ups the stakes tremendously, do you burn valuable cards looking for resources and tribe members weakening what you can send to the fight, or risk it all praying that you can fight them off.

There are specific mercenaries that spice up this stage with snipers that can take out opponents cards or saboteurs that can disarm an opponents equipment, its a great idea and really ramps up the tension as you have no idea what your up against. And again adds a rich chunk of story to what it is that you’re doing rather than just playing off cards against your opponents.

Now all of that makes a rich rewarding game and taken alone is fantastic, but Scavengers has some more tricks up its insulated sleeve. Included in the box is the HQ expansion that for 50 cards really adds a lot to the base game.

Its modular so you can add it in stages (suggested) or maybe just play with the bits that you like.

There are a bunch more equipment cards to go in the junkyard deck and a Medic mercenary who can save your clan members whilst being targeted by a sniper in the skirmish. These are all cool stuff and add more variety to the base game.

There is the Tribes option which is a modifier for the end game that will reward you for collecting specific resources, got all the meds then the Pharmers will come flocking to you and bolster your population.

The second part of this expansion adds a entirely different strategy and that is buildings, the schematics for these are pulled from another deck by a special engineer class and then dependent on the amount of time its required to construct this building that many of the players cards are placed on it and it ticks down each round until built. This process can be sped up by sending more of your tribe over to help. These can add a huge difference to the game whether its a Armory that allows you to store equipment cards for retrieval later before a  skirmish (effectively freeing up your hands to draw more cards on later rounds) or a Hydroponic Garden that generates food to assist with hiring it adds more thematic meat and gaming gristle to what is already a brilliant game overflowing with gaming gravy.

But there is even more, the final module in the expansion are Tribal Leaders – these guys are drawn in a draft of two cards, and are all unique offering various perks. Most of these guys are pretty messed up, the cannibal clan seem like a settlement to avoid. These bring more character and color to your tribe and the world whilst enhancing the game play.

Its criminal that this game hasn’t seen a wider release, aside from the wonderfully realized world, it actually offers something the other deck builders don’t, actual interaction. The skirmish mode and the whole poker style bluff and counter bluff. None of the games mentioned have anything remotely like this, whilst they are great the game play is pedestrian with everyone playing individual card games with the whiff of interaction. In this game you are always watching and wondering who has what, and where will the next threat come from.

If I had one complaint is the lack of variety in the available cards specifically the mercenaries and contested resources, the supplied ones are sweet but I’d like the option of one or two really powerful things in that deck and the option to change it up so you are never certain exactly whats in there. But that’s a small complaint and due to the nature of the game and its secrecy you never really know who has what until it strikes.

There is a sliver of hope on the horizon, Robert Gabhart the games designer is very active on the BGG forums and the next expansion Deception is done, and looks to include all the juicy stuff that fans are clamoring for. Its currently mired in Rio Grande’s reticence to push the button. Kickstarter looks like the potential avenue, but only time will tell and I just hope that this happens. But here’s something you can do right now to help, go out and buy the game, you’ll be supporting a great designer and giving a clear message to Rio Grande that we love this and want more, and you get a fantastic game to keep, what a sweet deal.

Dominion
Be the first to comment!
Leave a reply »