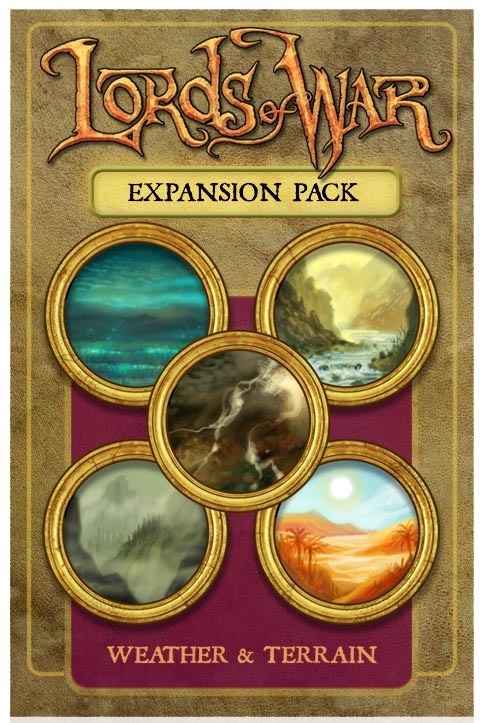 Adds lots of new mechanisms and ways to play.
Deepens the strategy.

Adds a lot of cool options to the base game, and these can be slotted in to any of the previous sets. The weather deck certainly needs some house rules as can be thematically a bit random. Another solid entry in the Lords Of War franchise.

Last week we gave an enthusiastic review to the new faction pack from Lords Of War Templars Vs Undead, one of the things that we enjoyed the most from that set, aside from the amazing Steve Cox artwork was how with a couple of subtle new rule changes the game had taken on some serious legs, bringing it closer to the designers original intent of it being a true contender to a miniatures war game.

Coming out of the blue at around the mid-point of the Templars Kickstarter backers were offered the opportunity to add on this expansion pack. So what do we get in this little box and how does it impact the game, is it any good, well read on and find out.

You get 54 cards tightly packed in this little box, and I kid you not, it took me a feverish couple of minutes of clawing at the delicate cardboard to get into this thing like some hamfisted lout. Inside you get the two decks with two cards of rules. The weather deck comes with the standard LoW logo on the reverse and a nice green back, the Terrain has a new slant (literally) in that they are played landscape instead of the traditional portrait of the armies cards.

So lets dig in then.

How these work is pretty straight forward, on the first players turn they draw 2 cards and examine them and then choose one to play discarding the other. For the remainder of that players turn and his opponents that effect is active. And then the second player drawers 2 cards and so on. The cards are simple modifiers to the base game and dependent on the conditions have either a negative or positive effect to certain stats.

For example the Beating Sun effect gives a -1 shield penalty to all cards, effectively weakening your whole army for the forthcoming skirmish. A blizzard will give a -1 to all attack arrows and stops units moving or retreating signifying being bogged down in heavy snows. The Drizzle card modifies infantry giving them +1 shield whilst penalizing Cavalry with a -1 on attack. The night effect allows players to play two cards on their turn. There are more but you get the point and included with these are a bunch of Fine cards which give no modifier. There are some rules variants included offering the option to remove certain cards from the deck or to play with just one effect during the whole game.

Thematically this set is great with a few hiccups requiring a pinch of salt,  for example playing the standard rules for these it is possible with a bad couple of draws to go from a glorious fine day, to a blizzard then get hit by a hurricane followed by a Sand Storm which you could argue is a pretty random set of weather conditions, although living in England it is very possible for virtually all of these to actually occur in a single day so nitpicking aside. The night cards offer another fascinating possibility and that’s adding a time scale to proceedings, suddenly your battle is occurring over a number of days. That then leads me to ponder another interesting idea,  of using these cards as timers, giving you a set number of nights to complete a goal, you can suddenly see how some grander campaign style of play could be applied by using these cards with maybe a mission book, or larger map of the world or area that you are battling out over. 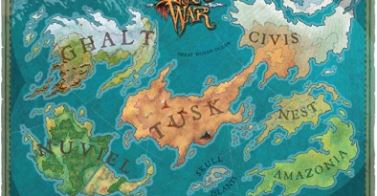 This is all spit-balling and I may just have come up with something that the designers had never intended, but it does at least for me seem a thrilling possibility.

These cards are no less interesting, although the included rules does suggest that you play with the weather first before throwing these into the mix. Of the two decks these are the more interesting in how they effect the main game. Much like the weather cards they all give modifiers to the faction cards. However these are used differently. They are placed horizontally on the board creating terrain, allowing for you to create an environment. We get Hills that give bonuses to ranged weapons, or mountains that are impassable and open plains giving perks to cavalry units. These allow you to build a map offering a subtle but significant alteration to any of the decks, building to a much more strategic game. These effect placement of cards and can lead to skirmishes to fight for position of the areas of the map that will give your units a commanding position. They all help to build a much more satisfying and thematic feel to these battles, taking them from a card game further into the realms of an actual battle.

There are also structures, walls and a gate which one alternative rule suggests a sort of capture the flag with one army besieging the other from outside the walls. These also come with a strength allowing for you to breach them if you can amass the right armies beneath them. Could we see down the line a castle deck  allowing you to create fortresses with maybe stronger siege units for breaking them down. Again these cards seem to be a tease into what this game could build too if expanded upon in this fashion.

Both sets bring a lot to the base game with an economy of rules and design, they get the job done without diluting what makes Lords Of War. Both sets have started me conjuring new whys to expand the game play with these and variants of them. It also brings me to another strategy that is as yet missing from this series, Magic. Currently there are no magic users but maybe we could see either a separate deck similar to these that could be applied as magic effects or powers, or maybe and possibly the better option a magic faction. They could come with the standard second deck but instead of another army maybe a stack of spells and effects that they alone can use on the battlefield.

If nothing else this tiny deck of cards has certainly gotten my brain ticking over the possibilities for this series that up to now I hadn’t even contemplated. I’d love to know what devious schemes Nick and Martin have up their sleeves and what we can expect next. Anyway this is turning into less of a review but more of a game design seminar, so lets get back to business.

There is a lot going on in this tiny expansion, and if that all these are and will be then its a great addition to the series. I really love what the terrain deck brings to the battlefield, and whilst the weather deck can be a bit hokey if used sparingly that also adds another neat new strategic spin on things. As of going to press I cant confirm how widely available this set will be or a cost, but if you can get these then they add a fantastic and interesting slant to this ever evolving game and I suggest you seek them out as soon as you can. And for the time being we can only look forward with anticipation  to what the future holds for this cool little game.

Who Dares Rolls – Podinterview 2 – Martin Vaux – Lords of War
Be the first to comment!
Leave a reply »