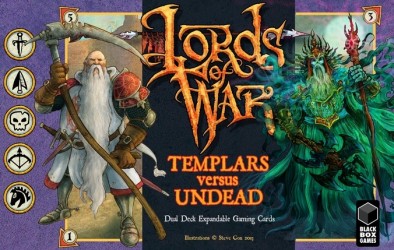 Ramps of the difficulty and strategy.

More of the same to be true, but this adds enough goodness to give the base game some legs. If you have the others you'll going to want to get this.

Well its been a grudge match long in the offing and so finally the forces of good and evil will meet on the field of battle to settle the score in Black Box’s latest edition to the Lords of War franchise, Templars Versus Undead.

We’re fans here at WDR of the Lords Of War series, we reviewed the first pack Orcs versus Dwarves back in September, I covered all the basics of how it played in that review, so if you want to know then go take a look, which is great because it gives me more time to concentrate on what makes these new armies so special.

This expansion was funded on Kickstarter last year and the Black Box crew wasted little time in getting this out, kudos to them, in this day and age of missed releases and broken dreams its nice to see a company delivering on its promises. And deliver they do,lets take a look at this set.

At first glance this looks business as normal, coming in the now standard two deck box complete with player mat, we get a cool purple one this time out and the rules sheet. And its these revised rules that hold a couple of simple additions that have suddenly changed the whole way this game works. How this series plays has been slowly evolving since the original release, the first set was aimed squarely at getting beginners comfortable with the mechanics and just playing the game. The Elves Vs Lizardmen armies expanded upon that with a slightly ramped up difficulty curve that required a tad more finesse and thought into what you did with your troops. And now with Templars Vs Undead its clear that there has always been a plan to make this series more than just a mere fantasy card game.

And this has been accomplished with a sprinkling of new rules. The first is movement, units in each of the armies now have icons depicting an arrow in motion, these special units can at any time during the players turn be moved one space in the direction that the arrow is facing. Suddenly what was a static almost chess like game of move and counter-move has sprung into life. Whilst taken on their own these new units are weak in comparison to most, this new power can combine their attack to existing skirmishes meaning that each player is always looking over their shoulder. 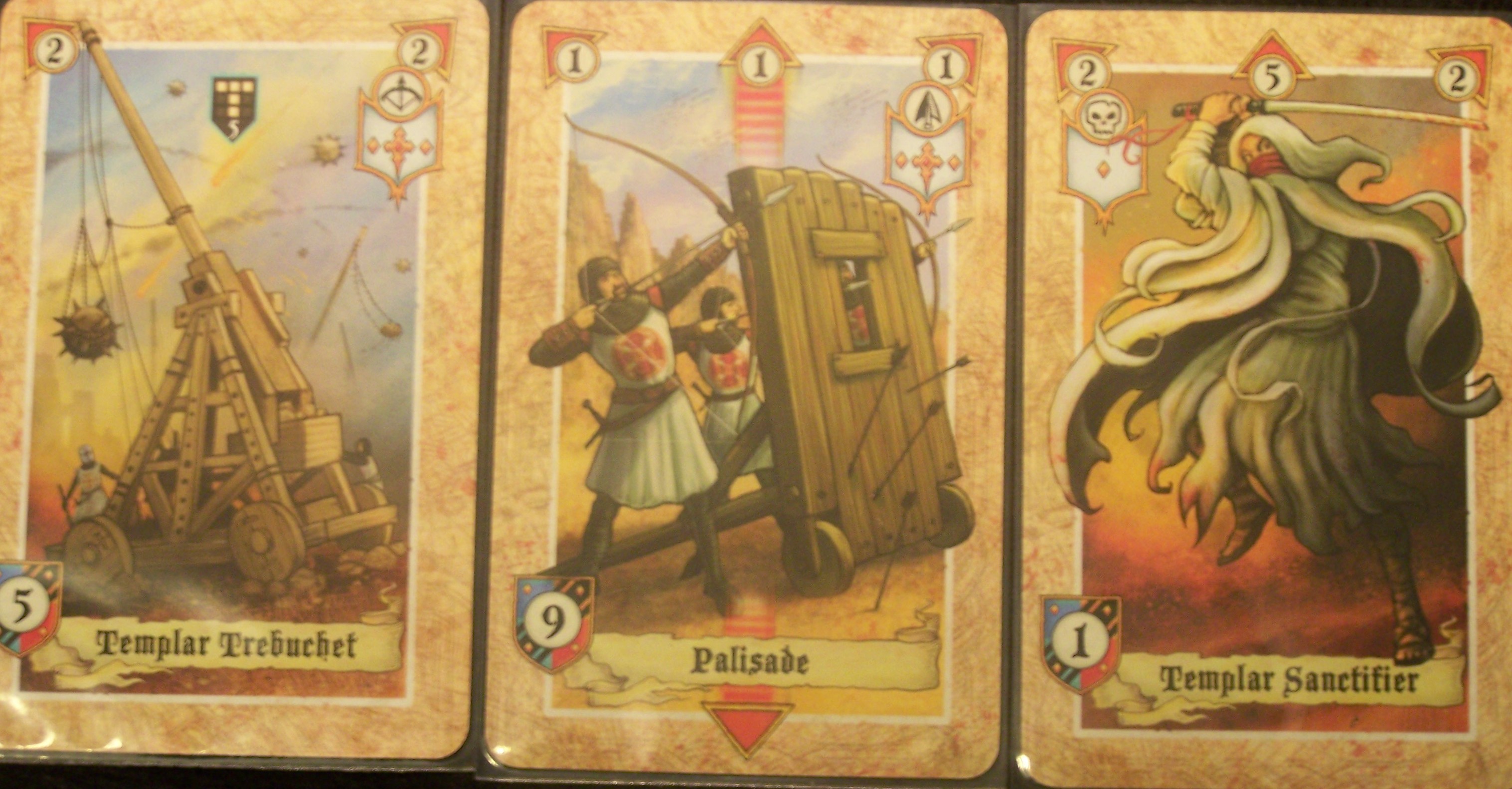 To go along with this new tactic there is also the berserkers, identified on the cards by a skull symbol these now are taken by a uncontrollable blood rage in the heat of battle allowing them to chain successful attacks with the potential for one of these units to cut a swath of bloody mayhem across the field of battle, or dive into the thick of it in a suicidal death wish. This makes them ticking time bombs that can cause equal levels of carnage on either side of the table and potentially derail a carefully thought out battle plan. 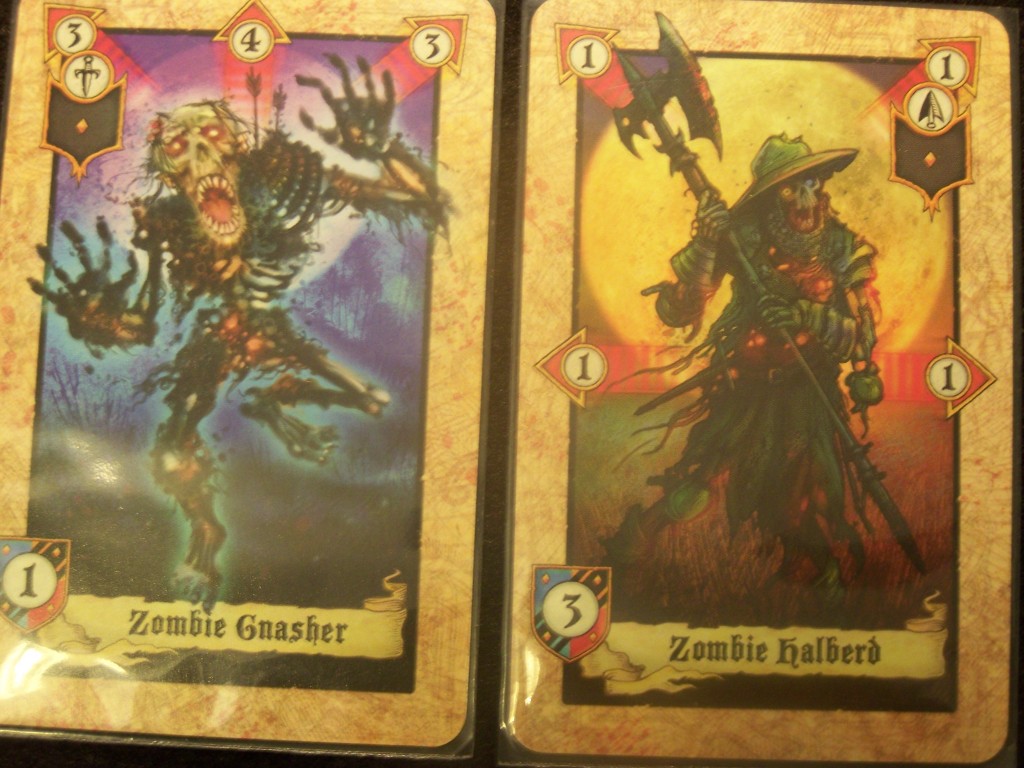 Finally there is also the cavalry and spear-men units, with the cavalry identified by a horse head icon able to be pulled out of the fight as long as they have not been pinned down by spear-men. Again another useful tactic making these units function differently to the base troops and applying a fine lacquer of tactics overall.

So what does all this mean to the game? Well it now resembles what Nick & Martin the games creators always set out to do, give you the tactics and action of a tabletop war game but with just a basic set of cards. These additions now make this a serious contender against Plaid Hat’s excellent Summoner Wars game. 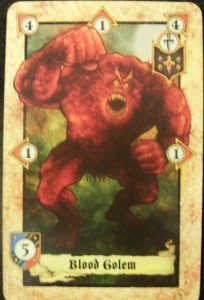 And before we go any further I need to once again give a shout out to Steve Cox whose artwork throughout this series has been one of its strengths and he doesn’t disappoint here. For my buck the Undead are the best looking set of cards yet, with a gruesome menagerie of freak show horrors and you can just tell he had a riot bringing these creations into rotting life, I’d struggle to pick a favorite but the Blood Golem certainly looks the part coming off as part Incredible Hulk by way of a blood clot. The Templars whilst they don’t get short shrift in the art stakes are a little bit more traditional, although I did spot a couple of familiar faces from among the ranks. And I’m wondering what I need to do to bribe them to get my mug on a future set.

Both these armies offer a nicely balanced mixed bag of strategies with the Undead being the trickier proposition with a lot of weaker units requiring some careful consideration, mixed with some decent ranged units. the Undead make the most use of the new movement rules and once you field a bunch of these guys you get the feeling of an unstoppable wave of petulance sweeping across the battlefield.

The Templars are more like a armored battalion, some of these dudes hit hard and have the defense to back it up, thundering a brutal assault through the ranks of their foes. They also have the Sanctifier’s the berserker class and once a couple of these start dicing a slicing you want to get out of the way. 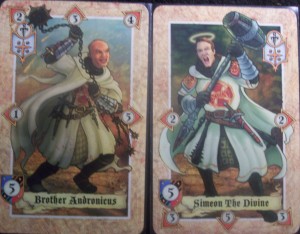 Yeah, so if you hadn’t guessed already I’m liking this a lot, this set has really upped the game literally and now I’m gagging to see what else Black Box have planned for this series. Hopefully they are going to revisit the original factions to utilize some of these new mechanics, or at least bring out a small expansion with some units to change out the base armies similar to the small sets that Summoner Wars has. I’d love a Cthulhu/chaos gods style hoard of eldritch terror to spew onto the masses, allowing them to use dimensional rifts to move about the battlefield (you can have that one on me boys, just give make me a character card. hint,hint).

And talking of expansions, I also have sat in front of me the Weather & Terrain pack that combined with these new shiny toys really starts to make this something special. But that is going to require a separate review as I haven’t had a chance to fully get my head around these new cards, other than to see that they are going shake proceedings up a treat and add an even deeper level of strategy to the game.

So if you’ve not yet dabbled your toe in these waters than go and grab yourself a set or three, give the base decks a shot and then prepare to get really bloody. Lords of War has consistently improved with each new army and now with this set they have issued a loud challenge to all would be contenders.

Who Dares Rolls – Podinterview 2 – Martin Vaux – Lords of War
Be the first to comment!
Leave a reply »