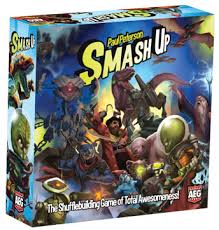 Can run long when played with 4 or more players.
Confusing for new players.

This is a neat little game, the idea of mixing the various races works really well and the art on all the cards is excellent. Really works best when played with 3 players the more you add the slower and convoluted the game becomes. Not the easiest game to explain to people new to the hobby.

Smash Up is a light card game which sits cheerfully alongside King Of Tokyo as a simple and fun way to while away half an hour. And like King Of Tokyo this one also looks stunning its a box brimming with fistfuls of wonderfully illustrated and colorful cards. So lets find out what its all about.

The game itself is a breeze to teach and its big hook is the “shufflebuilding” mechanic that the box proudly exclaims up front. In the box you get eight decks of different factions everything from Pirates to zombies and even Dinosaurs. Each of these factions all have a different play style, whether its the Dinosaurs (with frigging lasers) big heavy hitters for pounding your opposition or the Magicians that allow you to keep pulling cards from your deck into your hand and the Robots that you can pebble dash a location with dozens of smaller micro-bots running up noggin spinning combo’s. They are all cool and different. The aim of the game is to be the first player to hit 15 points from smashing bases. 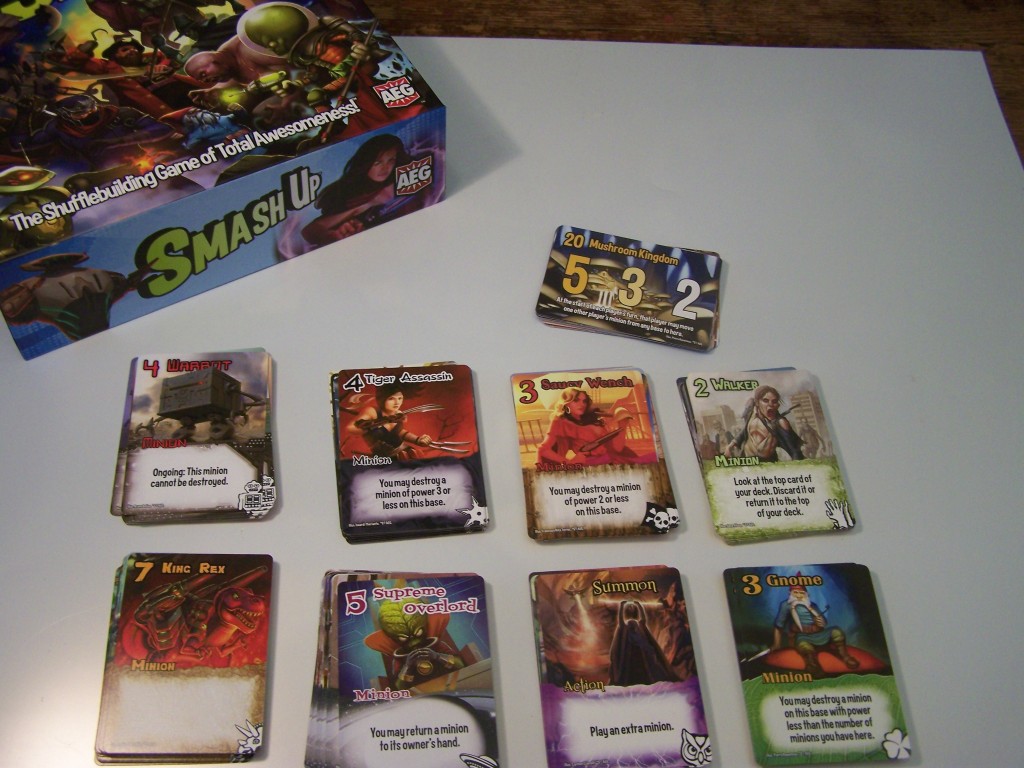 To begin everyone picks two factions and then mashes those together gives them a good shuffle and creates a deck he will be playing from (shufflebuilding – see it all makes sense). And with the variety of the different races all with their strengths and weaknesses there a dozens of combinations and powers to call on. Zombie/Dinosaurs not doing it for you well how about some Robot/Pirates? Your cards consist of two types there are Minion cards which are played on the bases to raise the score, each of these will have differing effect dependent on the faction. 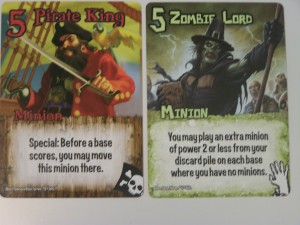 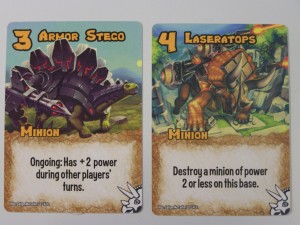 Or an action card, these will either have an instant effect removing minions or shifting cards around, or ongoing powers that will multiply the minions powers already in residence. 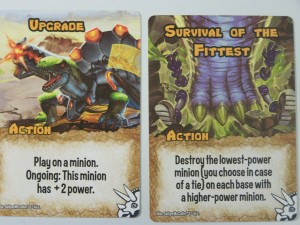 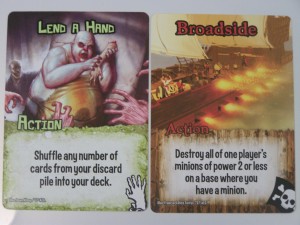 Every turn you get to perform both of these actions once. The strategy comes from what cards you are playing – The robots for instance will allow you to play further minions swarming a base and stacking combo’s. The zombies have cool resurrect ability bringing those vital minions back into your hand. 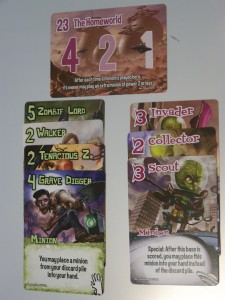 The goal is then to score on bases that are laid out on the table. Each of these bases has a break point score that when reached by the combined total of the cards played on it will smash the base whereupon the players in either 1st 2nd or 3rd place will score (dependent on that cards rules) and activate the bases ability.

And that’s the game, as you can see the rules are pretty simple, the strategy comes from utilizing your decks powers and seeing how the two factions complement each other and with the eight decks in the box there are lots of combinations that you can try before you will have had a go at all of them.

This is really fun, all the decks seem to be well balanced and I couldn’t find a combination that had any clear advantage over another. Each of them has strengths like the Pirates who can avoid being killed and move their minions between the bases. Everyone will have favorites and eventually it will turn into a fight as to who can snatch their most wanted combinations first. 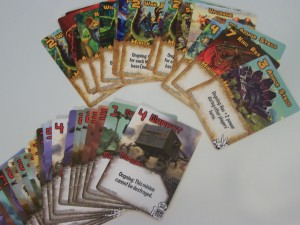 As I’ve already mentioned the art style really pops all of it is bright and colorful and the illustrations have a nice cartoony vibe to them. The cards themselves are a really nice stock, my only niggle with this set is the lack of scoring tokens meaning you have to have a pen and paper on standby to keep tabs of who has scored what. Bit of an over-site really, they have since corrected this by supplying tokens in the add on decks that have since been released. (yep more add on’s – we love them yay!).

The single game play issue is having to keep playing bookkeeper, keeping tabs on who has scored what on which base can sometimes be tricky with all the multipliers zipping around and will occasionally slow things down but its not a deal breaker. Summing up, for beginners this is another great entry level game and for the more hardened players this is a neat filler or warm up to a nights gaming. The sweet spot does appear to be 3 players but with extra sets this can go up to 5 or more (although the addition of too many players will stretch the game out and result in everyone working on their little areas reducing the player interaction).

And yes as I mentioned there are updates already out there. Power Up 9000 and a Cthulhu set each comes with four new factions and more bases, I’ll cover more on them in an upcoming review.

This is well worth a look and is a nice little gateway to the big grown up deck builders (Dominion,Thunderstone, Marvel Legendary). Or just a cool little card game.