Lords Of War – Orcs Vs Dwarves 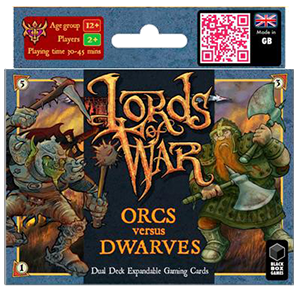 If you're of that generation that grew up on the early Games Workshop output and the fighting fantasy series, then for the art alone you will get that warm nostalgic feel.
The game play is involving, but this more a pretty abstract than a genuine alternative to the miniatures war game.
With the other armies and expansions this series has started to come into its own.

Lords of war is a strategy card game set in a Warhammer type fantasy universe, its published by Black Box Games who are relatively new on the gaming scene, founded in 2010 by Nick Street & Martin Vaux. 2012 saw the launch of their first product Lords of War which quickly went on to nab the Best Strategy Card Game award at the 2013 UK Games Expo (I think you’ll agree pretty good work).

With a new games company on the market and a British one to boot, it would be rude not to show them some love.

Lords of war was born from a love of tabletop war games, something I spent a great deal of hours (and money) on in my youth, so instantly this idea caught my attention. Black box have currently put out two deck sets each containing a player mat, rules and two themed decks of races.

I picked up the Dwarves and Orcs set as it was the first they released and it seemed a good place to start, being full of Orcs and Dwarves for starters. So without further ado lets give you a run down of how this neat little game works.

Each player starts with a hand of 6 cards, five randomly drawn from your deck and the sixth your General. The goal of the game is to either eliminate any 20 of your opponents cards or 4 of their command cards (each army has 5 commanders and the General). You play on a simple player mat with a grid for placing your cards and each player has a turn order.

Pretty simple stuff right, the core rules of this game can be taught pretty quickly so even a beginner can be set up and going within a couple of minutes. Right so lets take a look at some of the cards. 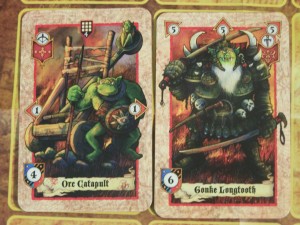 First things first I really like all the art on these, they remind me of some of the early fighting fantasy books and 1980’s Games Workshop, i also like that there is a lot of different art for the cards, even the duplicated units are separately illustrated with only a few copy’s flipped among the deck.

So back to the cards, as you can see they all have small arrows at points around the perimeter of the card (these are the units attack strength and where it can attack) – this is used when placing your cards in the deployment phase – whenever you put a new card down one of its attack arrows must be pointing at an oppositions card (the exceptions to this are ranged units that are not restricted by this rule the catapult above is one).

Everything else you need is also right there on the card. The Shield icon and number is that units defense and the other small symbol’s are its type and rank. 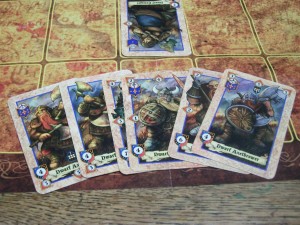 Once placed the next phase is the combat, at this point you add up all the complete attack force of any units who’s attack will hit the card you just played against, with careful placement you can create the equivalent of a combo and take down the more powerful elite troops. If this figure totals above the units defense total then its dead and is removed from the board.

The final stage the player can undertake is the reinforcements phase where they can either pull a fresh card from their deck or take back a unit that hasn’t been used that turn from the board.

And that’s pretty much it. The rules are deviously simple and its only after a couple of plays of this that it becomes clear that there is a deeper strategy to winning. If you go for an all-out attack and damn the casualties you can suddenly find yourself overstretched or worse in danger of losing through the shear amount of carnage among your forces.

And you need to be very careful with what your playing where, there was a couple of occasions that I thought I’d been right proper smart and pulled off a coup d’etat only for my opponent to stick down a carefully placed power card that obliterated a bunch of my undefended weaker units.

It does have that slight chess feel of a bigger game and strategy going on beyond whats in front of you. 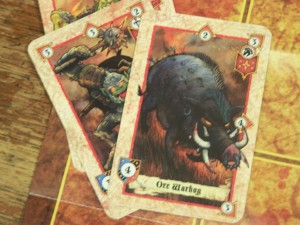 So final thoughts I think this is a keeper, Black Box are promising lots more to come, already we have the Lizard Men and Elves decks released which I think I might have to snatch up. They have already started to post intermediate and advanced rules up on their forums and have admitted that the possibilities are quite endless with what they can do with this. I will add that the theme does feel a little tacked on and really anything thing could be on these cards but again on the Lords of War site they have been good enough to throw a ton of lore for those of you looking to get your fantasy universe fix and again I have to say I really dig the card art.

At such a low price point they have packed a lot of game into a small box, its something I will play with the kids and when I get around to picking up a couple more decks I’d like to see how this plays with one of my groups.

You should be able to pick the game up from a local game store, there is a list on the site or grab a set direct from the Lords web store. 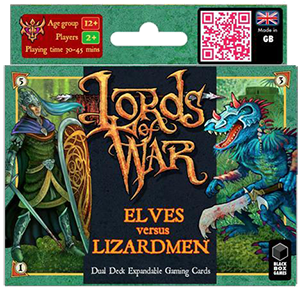 Black Box are based quite local to me, so hopefully we can arrange an interview down the line or some news of upcoming races and updates – watch this space.

Lords of War – Orcs versus Dwarves 2 – Magic and Monsters Expansion
Be the first to comment!
Leave a reply »