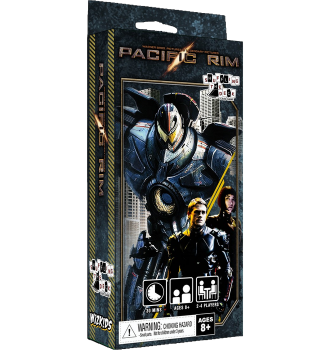 If you're a die-hard fan of the film you can add a star to the rating. This is a movie crying out for a decent game, this isn't it, but taken alone its an entertaining way to while away a lunch time.

Ever since the kids saw Pacific Rim in the summer they have been obsessed with this film and the world it created, its probably the closest they have come to that fanatical joy I had when Star Wars first hit the big screen.

To that end I have had an eye open for any cool merchandise or toys that would fuel this obsession, like any good geek parent we have to do our bit to support those geeky tenancies (the wife will disagree).

Unfortunately this stuff has been a little light on the ground, there’s a heroclix game that is apparently a tad vanilla but I might seek it out.

So anyway whilst browsing a local games store I stumbled upon this.

Lets be clear from the off, this is a very simplistic game so don’t go in expecting any sort of complex deck builder. I do have one issue and its that this is called a shuffling the deck game, but there is actually very little shuffling that takes place. In fact when the big deck of cards are exhausted the game ends? Hmm.

So the game is played thus, each player is dealt pilot cards for their Jaegers that are kept secret.

In the box are small card trays that you lay down for each of the nine pilots and you randomly place the corresponding Jaeger cards upon these giving you a row of nine there is flavor text on these but its just for decoration and none of the pilots or Jaegers have any special powers (a missed opportunity to mix things up). 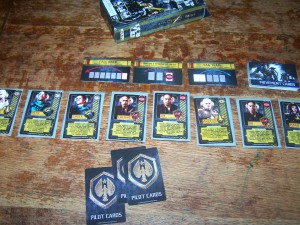 Jaegers and pilots ready for battle.

Above this is placed a deck of movement cards and three of these cards are dealt face up giving you an active pool of cards to play from. Beside our Jaegers is placed a second deck of Kaiju attack cards and one of these is also turned face up. 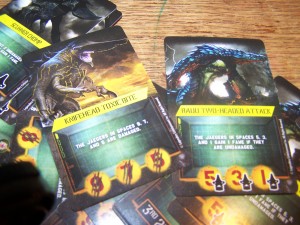 then on each players turn they have a few actions they can perform.

To play a movement card they select one of the active cards above the row of Jaegers, these cards perform a mix of actions that will shuffle the order of the nine cards below. 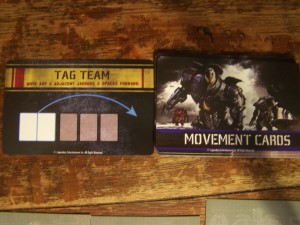 This order of cards does become important once we get around to the second part of the game, but they all do similar stuff some moving adjacent cards others particular teams etc. Most of the remaining actions are pretty self explanatory other than the guess the pilot option.

During the game fame is collected on each of the individual Jaegers as the various Kaiju attack cards are resolved. When a player attempts to guess the pilot held by an opposing player they name them and if correct that card is then kept face up on the table and the guessing player takes half the accumulated fame points on that pilots corresponding Jaeger.

If they get it wrong then that was their turn. This tactic only really has any worth once any of the pilots have amassed any fame.

Once they have performed their action the player than resolves the face up Kaiju attack card (see pic above) these work similar to the movement cards with them effected specific cards in that row of nine and either damaging the Jaegers (at which point the card is flipped showing a damaged side and stopping that card from collecting any further fame until repaired) or rewarding fame in various denominations or a few other powers. 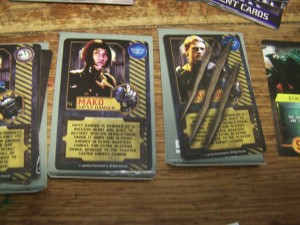 Oh no Raleigh is down!

And that’s pretty much it, the game ends once the Kaiju deck is exhausted with the player who’s pilots have amassed the most fame winning.

There is a couple of rule variants that do add a little more strategy to proceedings, one has more Kaiju attack cards being laid out so you can see the upcoming threats and plan for them. The other has the players being dealt a hand of movement cards that they play from, they also lose these cards when incorrectly guessing another players pilot.

This is a pretty light game, but there are some tactics to it, if I put this in front of my regular gaming group the optional rules are a must. The components are what you can expect for a sub £10 game, some nice illustrations and lots of shots from the film although there is very little variety and the card stock is quite thin. The trays for moving the decks around is a nice touch and works well and I’m glad they are included otherwise this would have been a nightmare of spilled decks.

Summing up for me – its OK, as a light filler it works i’m not really sure it will appeal to a hardcore gamer unless they a Pacific Rim fan boy, even then the theme is pretty tacked on and its a shame that there wasn’t an attempt to give the different pilots any specific powers (i think this would have given some more tactical options). For the price its a solid little game and is pretty quick to get through so it doesn’t outstay its welcome. As an aside I did see in the acknowledgements a special thanks for Vlaada Chvatil one of my favorite games designers (more to come from him soon) so it gets a pass for that alone.

And now a word from Ollie – The games target audience.

I found it exciting i think the game was really good i recommend buying it.

(A boy of few words)

Quarriors
Be the first to comment!
Leave a reply »