A Brief History of Blood Bowl 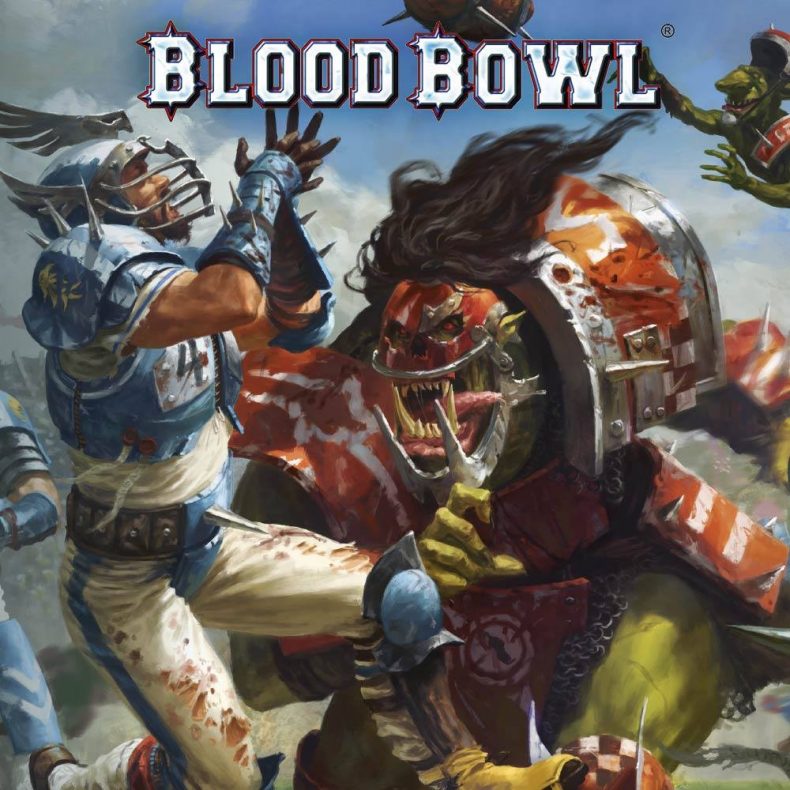 Inspired by my recent hamfisted coverage of the new Blood Bowl previewed at Essen on the recent podcast episode Adam rattled out this little ode to one of Games Workshops most enduring and popular releases.

So Games Workshop are publishing a new edition of Blood Bowl. This is indeed a good thing. Blood Bowl is easily one of my favourite games of all time – technically being a board game, but having the system designed around a long-running miniatures campaign. Since I first played the game, I have been utterly devoted to it. Pretty much every expansion, book, journal and a small number of teams have been added to my collection.

Small number of teams is an abject lie – as the Nuln Helblasters; Red-Eye Facebeataz; the Dance Dance Revolution; Axlotl Raptors; Bilgewater Bottom Feeders; the League of Extrashortinary Gentlemen; Karneth Cruel Hearts; Warptide Pirates; Kroakatoa Infernos and the Great Gut Devourers can attest to. So to summarise – yes, I like it. 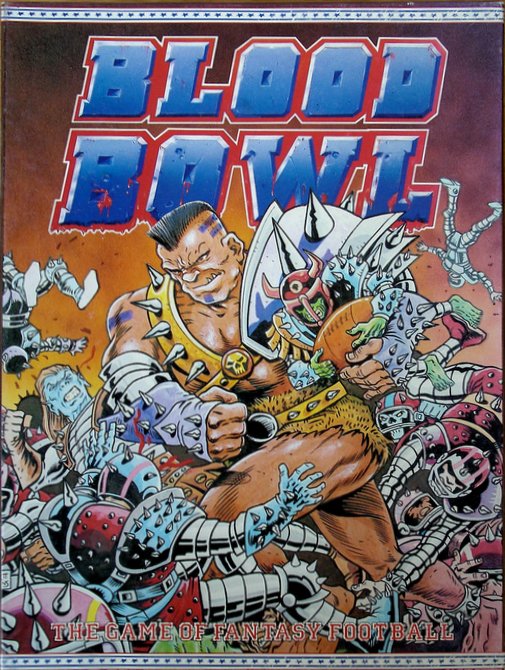 One of the first ‘fantasy football’ games, it sees various races, such as Elves, Goblins and Dwarves playing an ultraviolent version of American Football (I know our Atlantic cousins will just call it football – but back in Old Blighty that’s something different). The first edition of Blood Bowl was originally born out of Warhammer Fantasy Battles – the now deceased miniature warfare game from Games Workshop. Released in 1986, it featured card standees and an interlocking board to represent the pitch. Nominally set in the Old World, game designer Jervis Johnson saw it as an alternative universe where the game of Blood Bowl replaced the warfare between nations. It had a more polish feel than the usual Games Workshop grim fantasy, with the added mayhem of chainsaws, pogo sticks and grassrollers converted into machines of destruction. The system was clearly still rooted in Fantasy Battle with several statistics directly copied and others just renamed. The game only started to move into its own distant system in 1988 with the release of second edition. 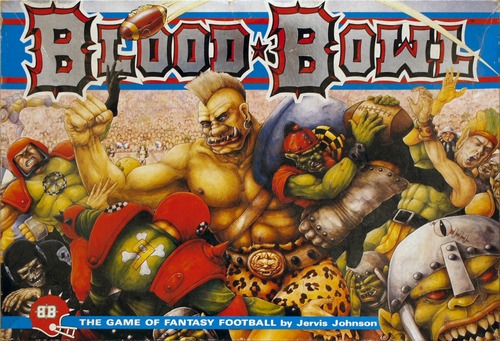 Second edition was my first Blood Bowl and it was an utter joy of a box set. Two teams of single-pose Humans and Orcs (admittedly crude by today’s standards). Two lovely booklets for rules and background. A series of clear plastic templates to represent passing and dropping the ball. And best of all, the glorious Astrogranite (dense polystyrene) pitch. The player statistics were better refined. However, they system was Chart Bowl. Pretty much every action was determined by rolling on a chart. Want to hit someone? Roll 2 dice, add your strength and deduct the opposing players. Throw the ball? Roll 2 dice and add any passing and catching skills you have. Thankfully the charts were all kept together in a nice little reference page. At first anyway … 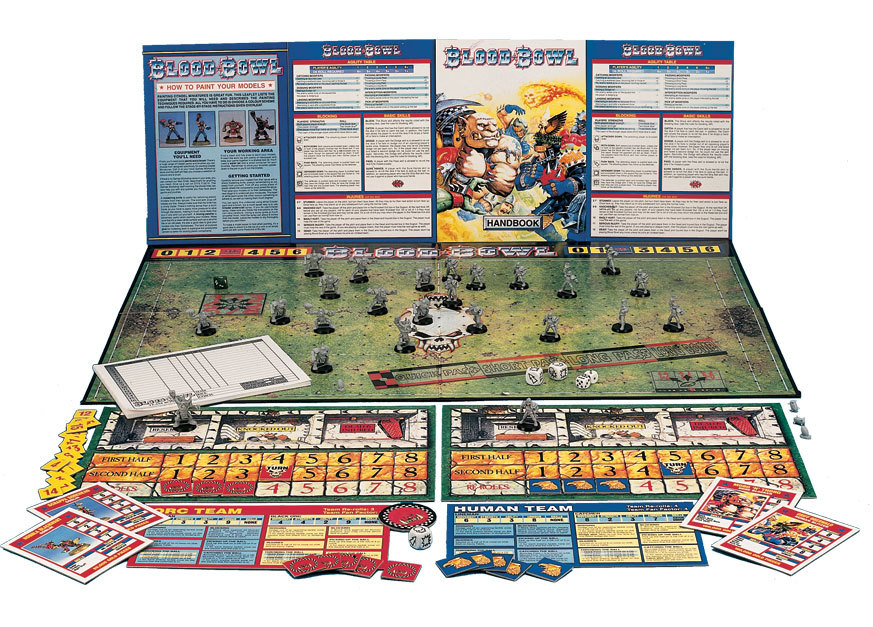 A board game isn’t a proper game until you get expansions is it? Blood Bowl had a lot. Blood Bowl Star Players and Blood Bowl Compendium were beautiful hardback books packed full of additional teams, special players and a metric tonne of extra rules. Why punch someone if you could kick them? Or push them? Then you added rules for fans, referees, special skills, mercenaries and special weapons (included the dreaded Chaos Seesaw –a cartoon-like device that would propel a player through the air by someone else jumping on the other end). By this point, the game was getting bloated and convoluted – with too many occasions of flipping between various rules pages I three different books and trying to remember how everything interacted with the other parts. 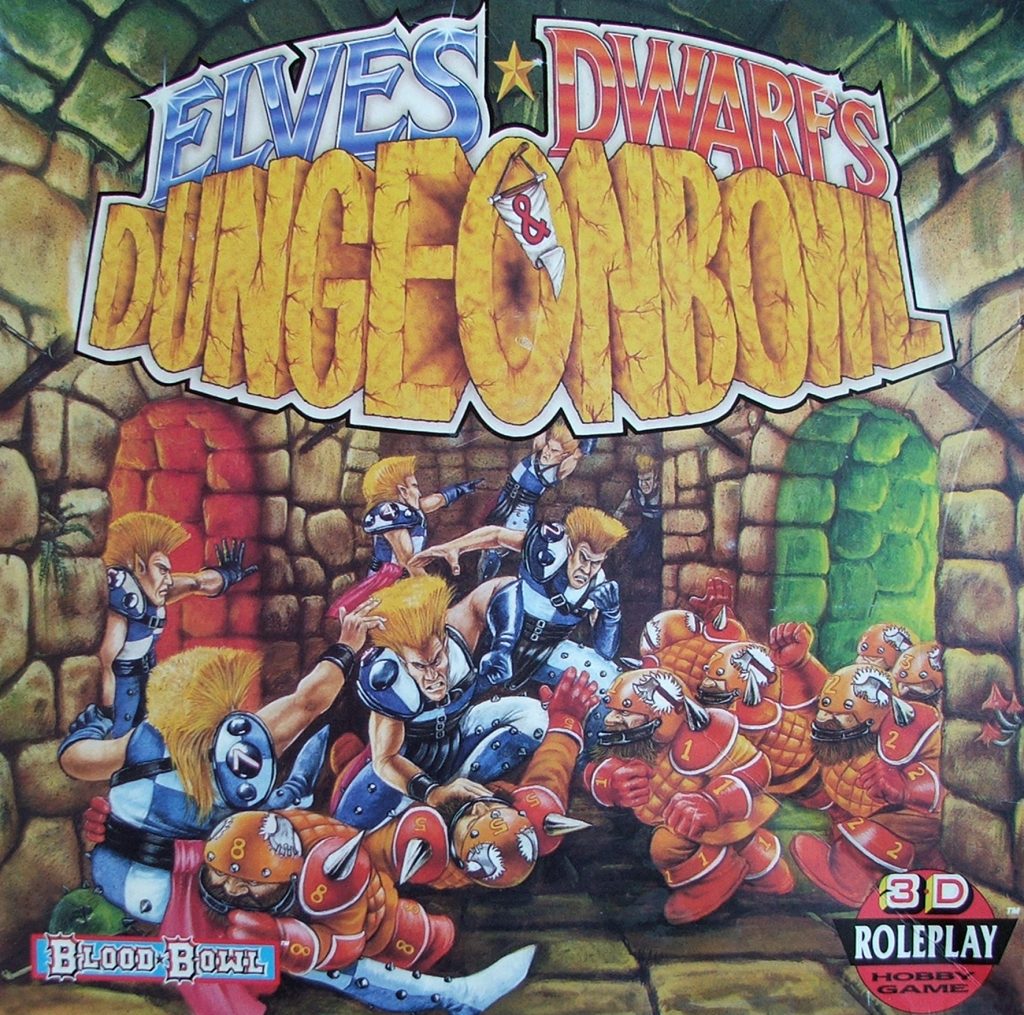 Also released at the same time was the game Dungeonbowl, which provided two extra plastic teams of Elves and Dwarves. This version of the game was about wizard sponsored teams playing the game inside a dungeon with traps and teleporters designed to add even more random craziness. It remained a well lovely supplement and even saw a new version being released in White Dwarf for later versions of the game. 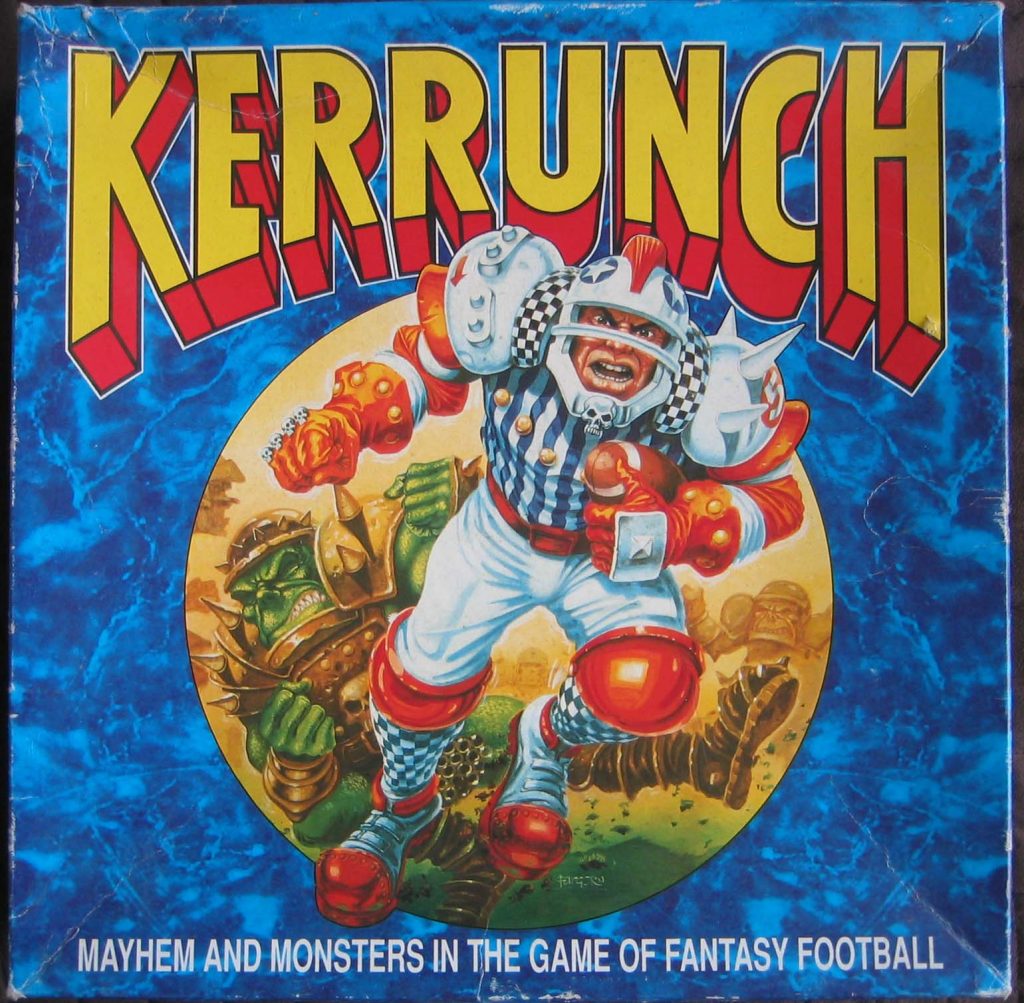 In 1991 came what was, in my opinion, a major misstep when a simplified version of the game was released entitled Kerrunch. It was made in a series of introductory games for younger players and reused the miniatures from the Blood Bowl and Dungeonbowl sets. However, for an introductory game, it was horrendously unbalanced. Of the two teams in the game, one side was unbelievable better that the other, to the extent that it was almost impossible for the other side to win. A friend of mine bought this and as kids, we came to this assessment after our first game, the result of which saw the game placed high upon a shelf and never played with again. 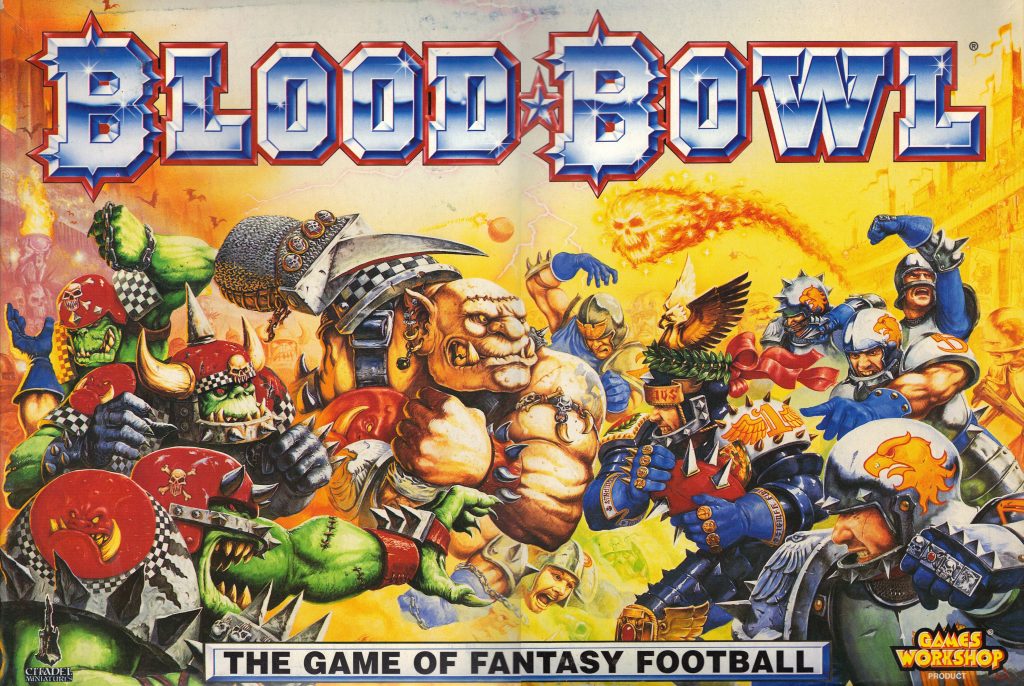 1994 saw the release of the third edition, which is the beginning stages of the Blood Bowl we know now. A new pitch, two new sculpted teams and refinement to the system that simplified the game into a much neater play style. Each player was rated by four statistics – Move Allowances; Strength (used for attacking other players); Agility (dodging out of the way and ball handling) and Armour Value (how tough a player is too hurt). In addition, other skills were added to players meaning the positions could be better defined by the type of skills they had. For example, a Human Lineman and Thrower were identical in terms of statistics, but the Thrower had the Pass and Sure Hands skills – meaning they were far better ball handlers. This game was also time limited – both teams had 8 turns a half and after both halves were completed, the game ended. This was a change from previous editions in which the first team to score 3 touchdowns won.

Each turn, every model could take one action – either move or block (the name for an attack). However, there were special actions that were limited to once per player turn. These were blitz (allowing one model to move and block), foul (kicking a model whilst it is down at the risk of being sent off), hand-off (giving the ball to a player stood next to you) and pass (throwing the ball). The strategy from the game comes from chaining these moves together in a way that minimises risks, as a failed action causes your turn to immediately end. This adds tension to any time you needed to roll a dice and meant that good coaches were often the ones that could keep their cool under pressure (especially as team turns are limited to four minutes real time).

The multitudes of charts were also done away with – instead, actions often just relying on a modified roll of a single six-sided die. Blocking also had its own special dice with multiple symbols representing the results. The number rolled was determined by comparing the strength of the players involved, with one player’s strength being higher resulted in more than one dice being thrown. The dice were slightly weight in favour of the attackers, but things could still (and often would, go catastrophically wrong. 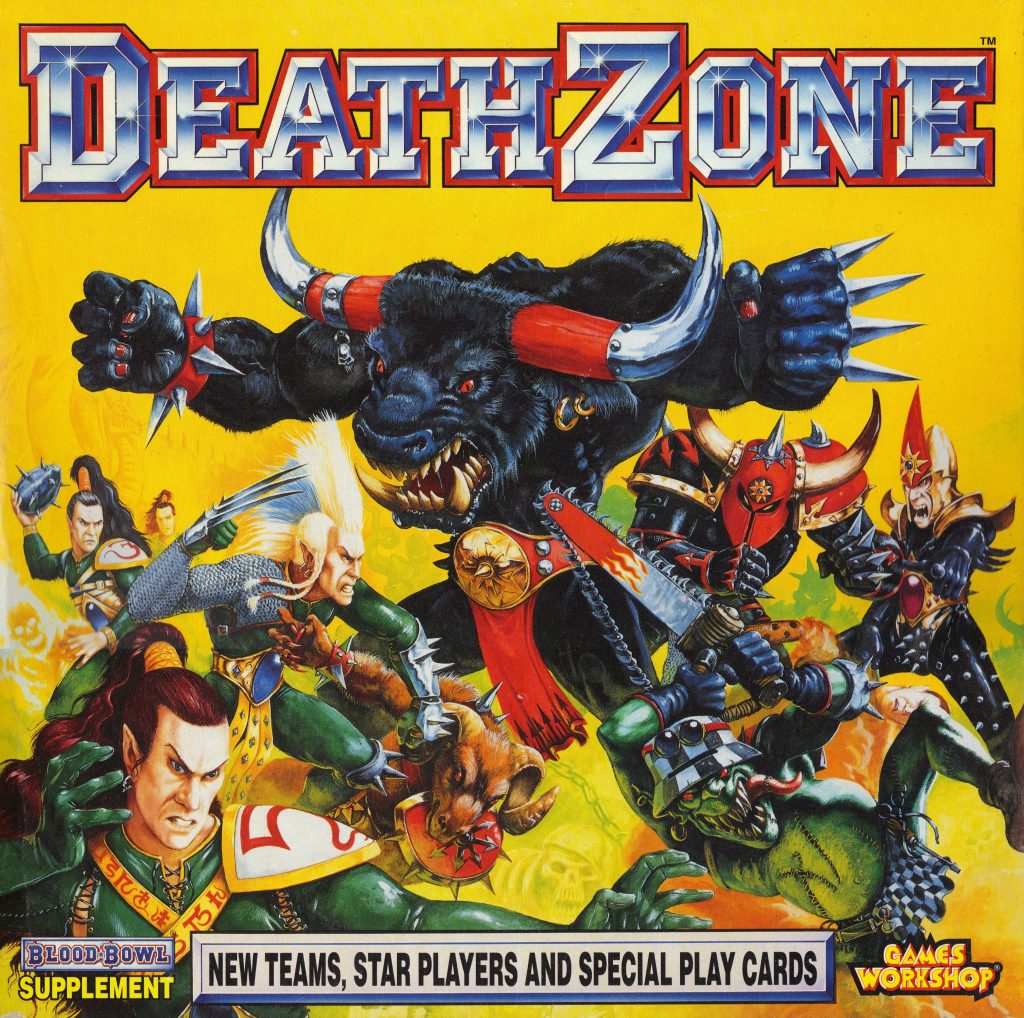 The streamlining of the game certainly got the attention of players and the gaming press, as this is still the basis of the game being played over 20 years later. It also won the 1994 Origins Award for Best Miniatures Rules. It spawned an expansion, Death Zone, which gave more Star Players, rules for 6 extra teams and a system for campaign play by which player could gain skills and experience. The rules were kept updated over the course of several years, firstly by Jervis Johnson himself producing the much-derided 4th edition rules (which he himself admits were a mistake). Then later by the Blood Bowl Rule Committee, formed by the designer with the intent of keeping the game updated through a “Living Rulebook” that could be downloaded for free from the website. This cumulated in the Competition Rules Pack in 2009 that also saw the disbandment of the Rule Committee.

However, Blood Bowl has not been left idle in the meantime. A 1995 MS-DOS (ask your parents) game was released by Microleague. It was very basic, only had 8 teams and had a partial implementation of the rules – for example, no players could gain skills. Then in 2009 the French Studio Cyanide released a version of Blood Bowl for PC. This version again only featured 8 teams, although there were much-improved customisation and team building options. The roster was vastly improved in 2010 with Legendary edition, bringing the number of teams up to 20 – and then again 2 years later with Chaos Edition that went to 23 teams. Most impressive was the online play that allowed for digital leagues to be run with little effort. A sequel Blood Bowl 2 was released in 2015, but with a depleted roster, has yet to capture the imagination of the previous versions. 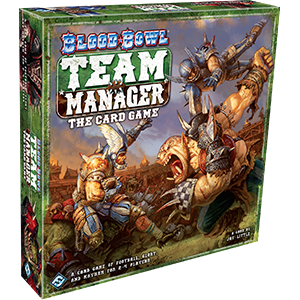 Fantasy Flight Games also made good use of the Games Workshop license to provide us with Blood Bowl Team Manager in 2011 – a card game based on the concept of building a team from the various players available and attempting to be crowned Team of the Year. It’s a very good drafting game which suits the theme well. However, as we all know, thanks to the recent GW/FFG split, it hasn’t long for this world … 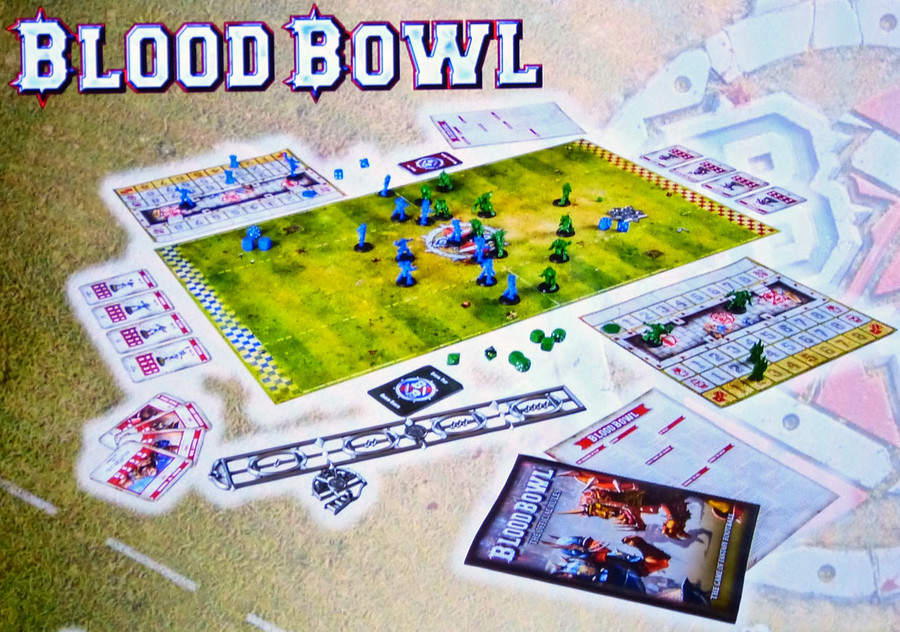 Which brings us to the upcoming release of 5th edition before the end of the year. Already some very shiny new miniatures have been shown off and we know that the game will feature a double-sided pitch (to represent the home grounds of the two teams in the box), as well as an extra wave of teams to follow. How much the rules will change is uncertain, but the first looks seem to suggest something very similar to the previous edition. It could be that we are getting just a blinged up version of the last game, with the expectedly high GW pricing. And if so, I absolutely will not care.

Blood Bowl is my game – I have loved it for over 20 years. When the third edition was first released, I was at the front of the queue to pick it up. When GW closed their specialist games section, I still played it and found other like-minded fanatics to enjoy my games with. When the miniatures became discontinued; I scoured e-bay, hacked apart plastic figures and found other companies that could supply me.

Blood Bowl is chaotic, frequently unbalanced, unbelievably frustrating and stupendously silly. I wouldn’t have it any other way. And if you want to join me with my obsession, there’s a rather lovely looking new box available very soon.

Judge Dredd The Board Game

Games Workshop and Fantasy Flight Games fall out of love
Be the first to comment!
Leave a reply »