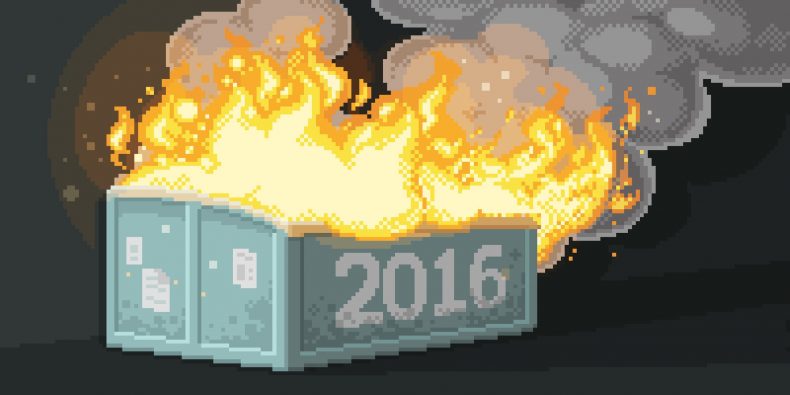 It’s been a rough year. From Bowie’s death to Brexit, the US elections and what feels like a million other horrible things. I’ve had my own horrendous personal experiences separate to all of that which have added to the horrors of 2016. I don’t know about you, but I’m feeling kind of done with relentlessly miserable prestige television and grimdark games. In times like this, we need some positivity to help give people the example of what the world should be. Star Trek, not Fallout. Things are dark, but you make your own reality and surrounding yourself with endless misery isn’t going to help. I’ve decided to put together a list of five games to help lift you up and add some cheer to your last month or so of this craphole of a year. 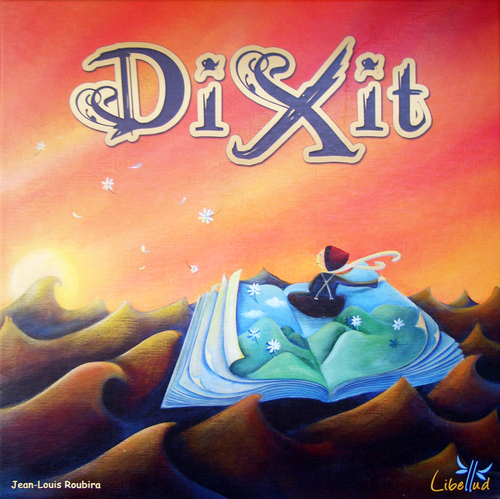 Why I’m not including Dixit in this list
I love Dixit and it’s a beautiful game, as fellow Roller Adam wrote about here. The problem with Dixit is that you suggest things for the pictures and there’s no way people would be able to avoid mentioning Trump or Nigel Farage’s punchable face or any one of the many celebrity deaths. That’s going to get people thinking about 2016 and being depressed all over again, so I’ve avoided Dixit for this list. 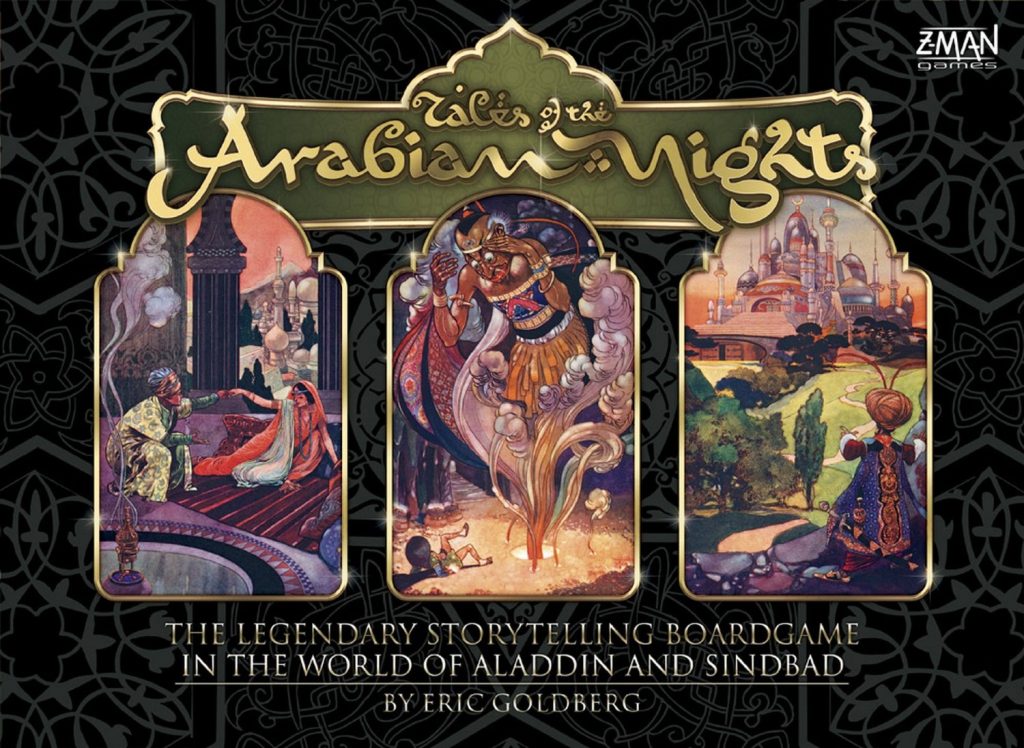 Tales of the Arabian Nights
By Z-Man Games
Think of this game like a giant Choose Your Own Adventure, but with a board and some hilariously weird side effects to your decisions. You walk or sail somewhere, then draw a card and find out what event you’re getting from the big book of tales. You get something like, “You see a beggar who is harassing nobles in the street, what do you do?” Consulting the tableau in front of you and your skills you decide to con him and end up missing your trousers in the middle of a field. Or maybe you attack him and are actually given a position in government by the other nobles.
You learn to go with the flow and do what entertains you. There is a competitive element to it, but it’s basically to have the best story. You don’t have to be good at fighting and sometimes a fight might not even need you to have skills like ‘weapon use’. Sometimes you’ll get eaten by a whale and find someone building an army of merfolk, or maybe marry a magical beast, or mutate into an ape and discover the ways of Allah. It’s a beautiful pachinko machine, chaotic and entertaining each time. 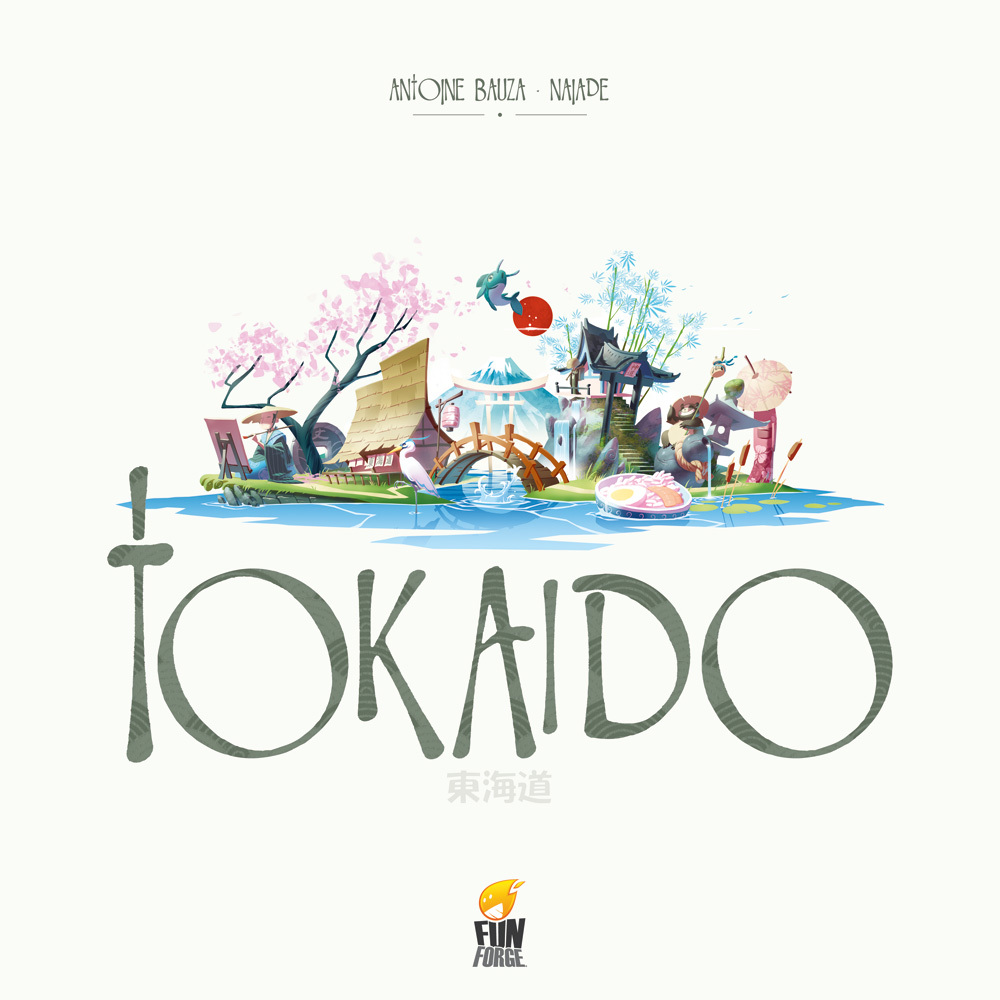 Tokaido
By Funforge
When I get stressed or uninspired, I like to go for a walk. One of the nice things about Brighton and how much it isn’t really that big of a city is that you can wander some streets, a park, the seafront or the countryside. Each gives you something new and lovely to see. Sometimes you’ll meet people or stop off somewhere to buy something. Tokaido is the board game of having a lovely walk. You can’t win by just doing one thing alone, you’ve got to have a spread of nice experiences. The art is sparse but pretty, the mechanics involve choosing whether to rush to what you want or be patient and takes life as it comes. There are expansions like Matsuri which add semi-random festivals going on at each leg of the journey, or Crossroads which adds a second choice to pick up on each stop along your journey. 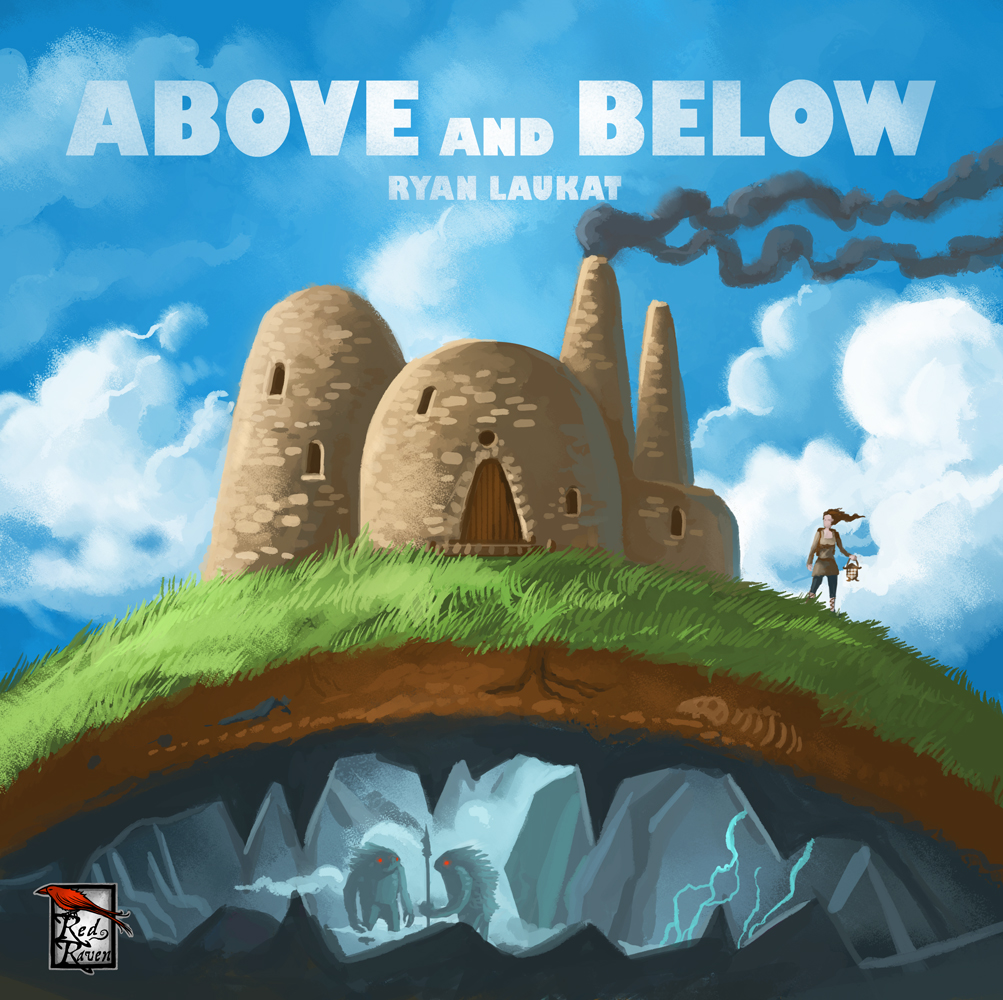 Above and Below
By Red Raven Games
You play a group of people whose homes were disrupted by an earthquake. You have a handful of people and a house with some beds. Everyone goes out to work, building new houses, harvesting resources and training new workers. At the end of the day, they go off and have a bit of a sleep. The great thing is, there’s a book of tales like in Arabian Nights, so you can send people under the earth to explore. They poke around, getting into mischief and finding a world which comes alive. It becomes apparent that while you’re making a home from this disaster, there’s a vibrant world under the surface. You might randomly recruit a cave cat who’ll only bother to do his assigned action 50% of the time.
The game is the most adorably illustrated, with Mark Oakley-looking painted storybook art. The houses have these little wisps of cloud which join together when you put them next to each other. The people all look unique and jolly, like a Solid Snake guy who isn’t actually very good, or a lizardman, or an old guy who looks enthusiastic. When you send them into the underground and injure them to get the result you want, they’re just ‘exerted’.
Then seven rounds have passed and the game’s over. Above and Below gives you enough time to learn the mechanics and enjoy the encounters under the ground, then it’s done. It’s a game which really doesn’t outstay its welcome and I love it for that. 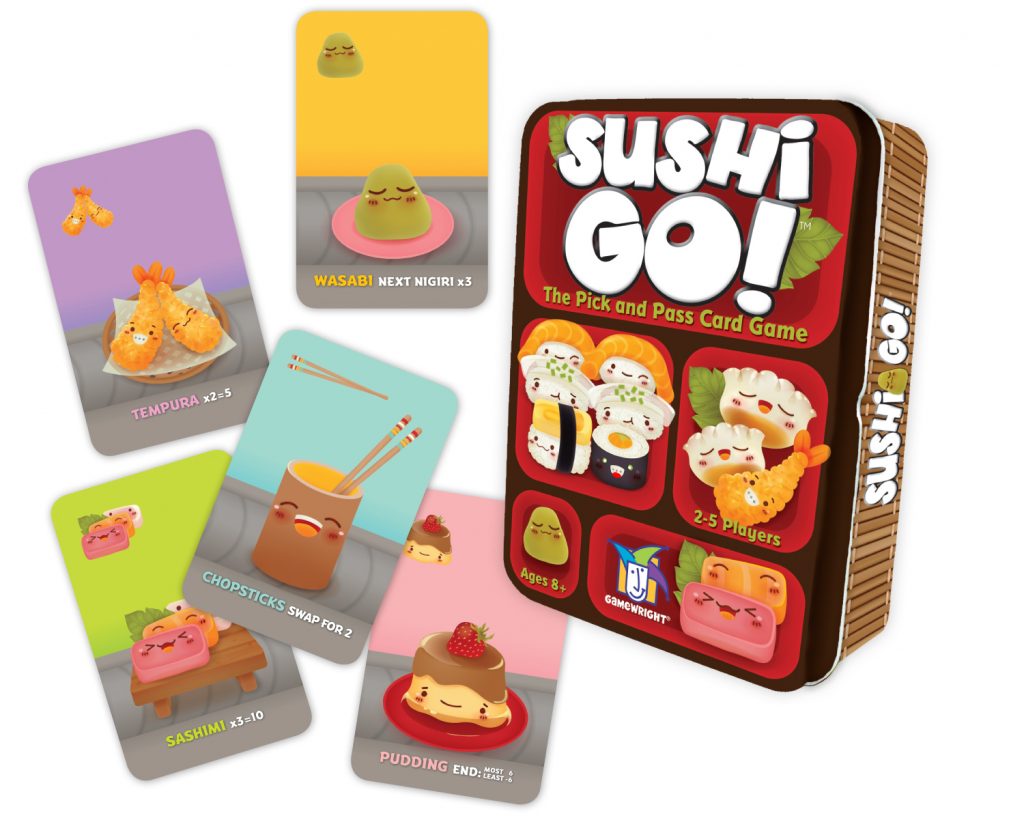 Sushi Go
By Gamewright
It’s difficult to play Sushi Go and not smile. Look at the adorable little sushi, lining up to get eaten. The cards are bright and jolly. The rounds are fast, kind of like if the drafting from 7 Wonders was isolated and make into the entirety of the game without any long weird bits like the science calculations. I love 7 Wonders, but this part is where most of the fun comes from. Also each time you grab an extra card with chopsticks you yell out, “Sushi Go!” which is always fun. 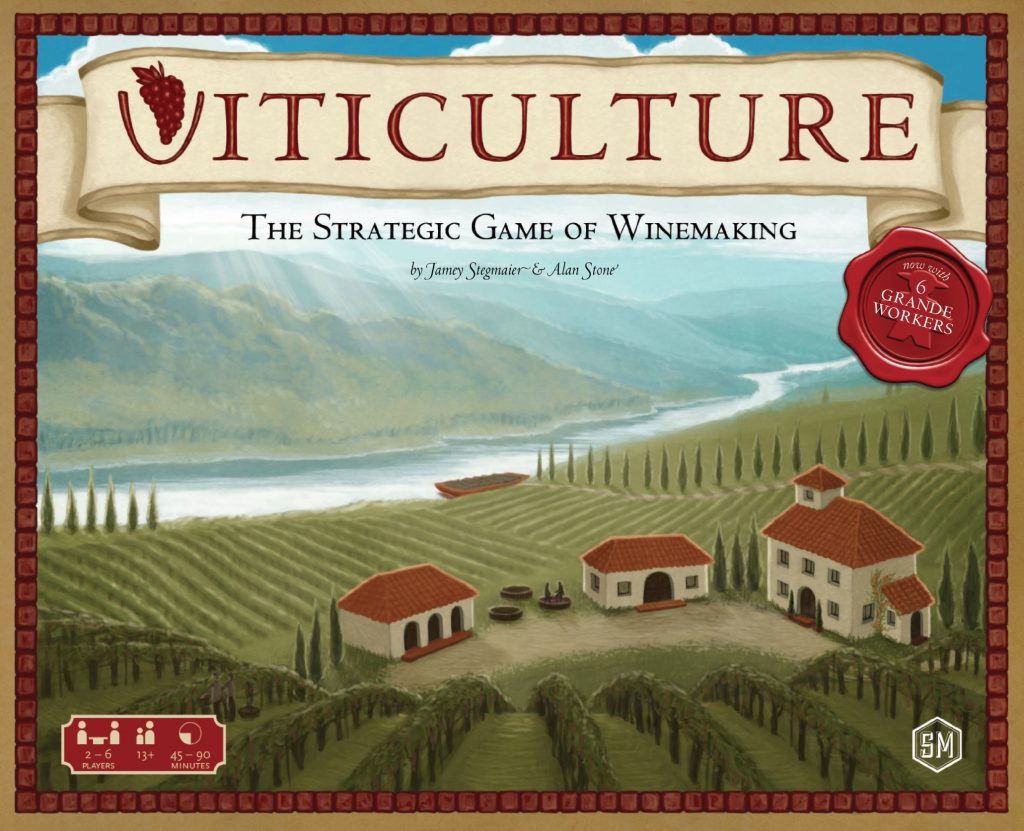 Viticulture
By Stonemaier Games
I’ve given you happy options, but at the end of the day, why not drink?
Okay, Viticulture is more than that. We’ve covered Viticulture here before and I’ve found that in bad times, it’s a nice game to chill out with. For a eurogame, it’s pretty simple and clear to understand. This may be subjective but making wine in Italian fields feels a lot more fun and accessible than something like power stations or trains. The turns start off calm and slow, with no expectation to fill orders or even make wine yet. You can take your time, relax as you try to work out where to place your farmers, harvest your vineyards, give tours to visitors… see? Everything about this sounds relaxed. Like Tokaido, people can take it seriously or be competitive if they want, but it’s best done in a relaxed setting, especially this year.

So those are my five favourite games to stay calm as the world falls apart around us. While my game collection is horrendously large and threatens to bury me with every new item, I haven’t played everything and tastes are subjective. What games cheer up you and your gaming group? Sound off in the comments with your suggestions.

Who Dares Rolls Podcast – The One With Jamey Stegmaier in it.

Viticulture & Tuscany Expansion
Be the first to comment!
Leave a reply »