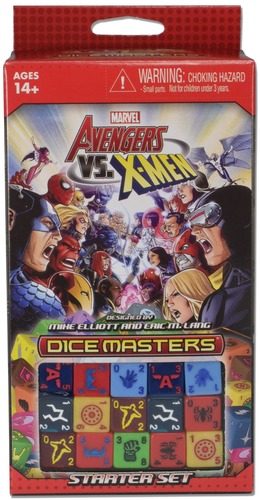 Easy to play.
Inexpensive to get into.

Collectible, amassing that collection is going to get expensive.
Very thin cards, some poor dice quality.
Hard to find.

This is a gaming monster, it still continues to show no signs of slowing down and continues to be constantly OOS. If you can hunt down a set I strongly urge you do, it offers a deeper level strategic game play than it appears at first glance. And opening those packets.. JOY!

When I first heard about this game I was on the fence, I own Quarriors and whilst fun, it needed the expansions to really fix a game that traded off the fact it contained all those cool dice. So when Wizkids proposed this new Marvel licensed version I kinda suspected more Quarriors with different dice, cue cash in.

Well I was wrong, the returning Quarriors designers Mike Elliot and Eric Lang have completely overhauled the original rule set making it play much smoother and quicker and most importantly more fun.

To address the elephant in the room, yep its a collectible game but at a low price point especially compared to its closest rival Magic, and you get dice with this not just cards. Quality wise its of the standards we’ve come to expect from Wizkids with the dice actually looking pretty cool and I only have a couple with a less than stellar paint job. The card stock used is pretty thin, and once removed from one of the booster packs will require flattening over night beneath a copy of Twilight Imperium before you can realistically use them without looking like a stack of pringles. I picked up a bunch of boosters and have to admit to some glee at popping open each new pack and watching what dice tumbled out, i don’t remember feeling that giddy rush of excitement from opening something since my days of collecting stickers for my Return of the Jedi album. The most heart stopping moment was when a Green Goblin die dropped out and my heart gave a flutter as I pulled the cards free in anticipation of a SR, only to find that during the sealing process they had become glued to the packet. Several tense moments and heart palpitations later left me with a damaged but serviceable common Gobby phew.

So anyway lets get onto the game, is it any good? Yes is the answer. Is it better than Quarriors? Again I’d say yes. The starter version of this game requires far deeper strategic thinking than Quarriors and has much more interaction. And whilst there is some choice to be had in this set, you are going to need to buy some boosters to make the most of what this game can offer. The game is a far more accomplished mashup between deck builder and dice rolling than Quarriors managed, and I suspect this is originally what was envisioned for that game. So once you’ve taken the dive and amassed a collection of heroes from the boosters you can really start to build a deck to play to what ever strengths you enjoy, some of the heroes compliment each others abilities and can be combo’d together for devastating attacks whilst others offer support or options to draw more dice. Once you are playing the luck of the roll rather than the random draw of cards dictate how you build and play your deck so you still have to react to how lady fate is feeling that day. Its a simple but deceptively thinky version of the original Quarriors and I like what they’ve done.

You start each game with 8 basic dice with symbols for each of the 4 different energies you will use to buy your heroes, a basic sidekick character and a question mark that you can use as any energy you want. Once you’ve bought some heroes and rolled them you can field them onto the play area, then either choose to attack your opponent or hold them back to defend. Many of the cards offer perks for having already fielded heroes which will boost attack and defense, or even damage any dice held back by your opponent for the same purpose. Your overall goal is to whittle down the opposing players 20 points of health by breaking through his wall of heroes defense he will be trying to build up. 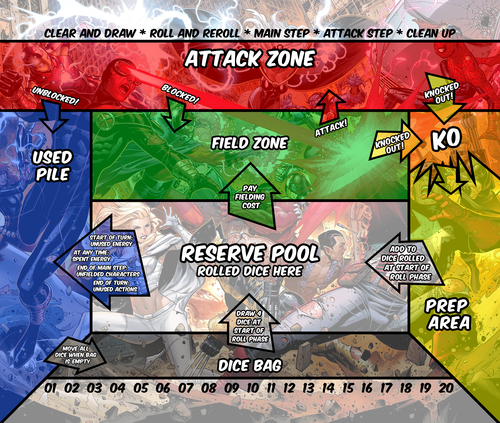 The fighting works exactly like Quarriors with the character dice having 3 levels of power and a cost to field, a attack score and a defense. When you attack an opponent your attack is blocked by whatever characters he chooses to defend you with, if your attack is more than that dices defense then its knocked out of play and has to be re-rolled on his next turn, the same will happen to any of your heroes beaten by a defenders attack. However if your attacker survives without taking damage above its defense score then it goes back to the fielded zone ready to attack again on the next turn. If your opponent has nothing there to stop your attack then you deal that amount of damage from his 20 health and then your dice is used and will be cycled back into your bag.

And that essentially is the game, build your deck and then field your heroes using their powers to boost your attacks or defense scores. There are also some basic action dice available for either player to buy that give modifiers dependent on which cards you choose. 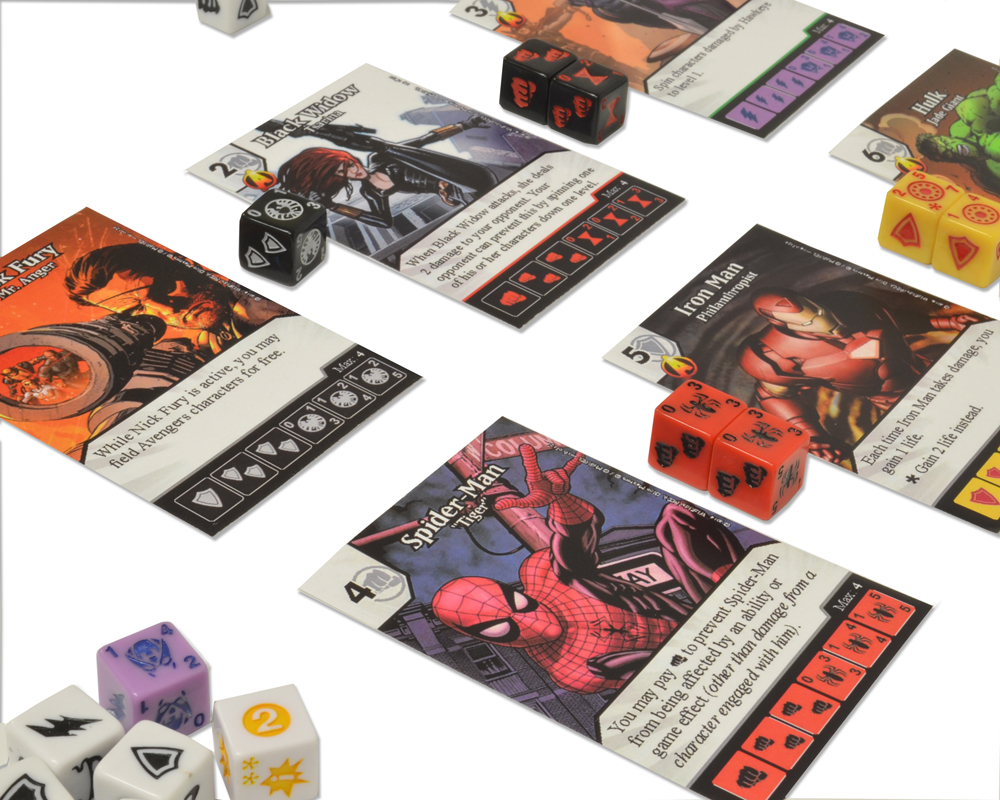 I really like what they’ve done with this, its a simple game to teach so it will certainly bring in fans of the comics with little or no gaming experience, but it also has enough meat on its bones to satisfy the more hard core among us. Yes you are going to have to sink some cash into this to get everything, but with the variety of powers and cards on offer you can still field a decent force and learn the ropes without having broken the bank. It comes down to a few simple questions you have to ask yourself, are you happy to buy into the collectible model and will you know when to stop?