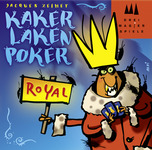 If you're in the market for a down and dirty, quick to pick up game then Kakerlaken is your thing. Works best in large groups and with people willing to get into the stupidity of the game.
Great to take along to a pub.

And now for something simple and fun.

Filler games or openers or indeed closer’s (for those of you now confused let me quickly demystify those terms – fillers are just that a small quick game to play when you might be in a rush or waiting for others to arrive. Opener’s and closer’s and sort of the appetizers or puddings in a gaming night banquet)

All board game collectors worth their dice owns a few of these – something to chuck on the table when somebody new appears or maybe if your travelling and will need that gaming fix.

SO Kakerlaken Poker – this was introduced to me by Adam at a local gaming group Southampton On Board I’m beginning to suspect he’s getting a cut, because everyone I know who plays this game pretty much goes out and buys themselves a copy after playing. And at £10 a pop its an inexpensive addition to your collection.

Its a simple little game of bluffing a little like 3 card brag without the money being thrown about (thankfully as I have lost some silly amounts playing that game – Kids don’t gamble M’kay) the deck of cards is made up of 7 different cartoon creatures Bats, Rats, Cockroaches etc.

Taking it in turns a player chooses a card from their hand and then slides it face down to another of the players at the table making a claim as to what it is (this can be the truth or a complete lie) the challenged player then has a couple of options.

And that’s pretty much it. Once a player has 4 of the same critter face up in front of them the game is over – they lose and everyone else wins. We have a house rule that the player with the least cards in front of them is overall winner but that’s just because we are competitive and like the option to gloat and jeer at everyone else.

This is the Royal version so there are some extra bits in the box. In each set of critters there are Royal cards – they have crowns. Just like this: There is a random deck of 7 penalty cards – when a royal card is collected by a foolhardy player they also need to take the top card from this deck. This can add an extra strategy if the card on top will take out another player or even worse another royal leading to them picking up more cards.

In addition to that there are two Joker cards that can be added to the deck for further variety one always being right the other always wrong. Personally we’ve found them an additional rule that causes more confusion then gain and rarely use them but its always nice to have options.

And that’s it really – The thing I need to get across is how much fun this game is. If I get this out we are guaranteed 20 minutes of stupidity and everyone having a chuckle. Its just a really light and fun game and most of our games sessions now round out with a couple of games of this. Its even surpassed Love Letter (I’ll get a review up soon but another simple but fiendish card game) which was my groups previous dessert game.

Love Letter
Be the first to comment!
Leave a reply »