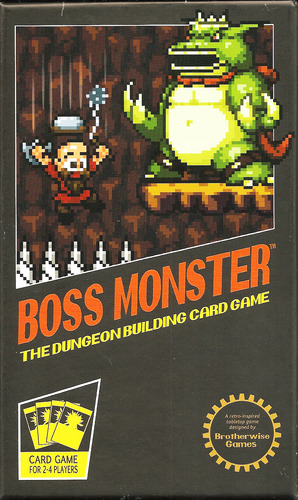 This one is a shame, because I wanted to enjoy this, it has some excellent packaging and art design but the games just a mess. And whats with the rubbish bosses. This promised so much but fell so short.

Boss Monster is catnip for any passing geek, there’s the cool retro 8-bit style of the cards and the genius box design that alludes to those bygone days of gaming on creaky old consoles. Then there’s the theme, manage your own little dungeon as a bunch of heroes attempt to pillage it like some Conan themed stag party, only for the bumbling lunkheads to be wiped out by your fiendish traps and horrible monsters. Its a hugely popular idea already accomplished fantastically on the PC by Bullfrogs genre defining Dungeon Keeper and with some success later in cardboard by Vlaada Chvatil and his Dungeon Lords (although that one is a bit of a marmite game).

This one isn’t as heavy as Vlaada’s creation, we’re in filler territory, its rules light and a relatively easy to grasp card game. It plays up to four with each player taking the role of a random “Boss Monster”, each of these is a humorous non IP threatening variation of some classic video game baddies. The goal of the game is to assemble the best and most dastardly dungeon to attract all the heroes over to your place and then murder them, actually putting it like that it all sounds a bit creepy. The first Boss to kill 10 heroes wins, if you are unfortunate to take five wounds then you are out, you receive these wounds by any heroes successfully navigating through your dungeon without being maimed or made to be less alive then when they started. So yes a tasty big heap of geek catnip, the sort of thing you can roll in waiting for a tummy tickle.

Components wise you get a couple of decks of thin cards, they aren’t the best stock I’ve ever encountered nor the worse. I’ll give them a pass for the pixel card art that actually functions within the theme of the game rather than just being a tacked on gimmick to be cool, something that seem’s to have reared its blocky little head of late, especially among Kickstarter’s. And hats off to whoever it was who came up with that box design because I’m sure a huge percentage of sales will come just from the cool factor of wanting it on your shelf.

Unfortunately once we dig into that neat little box its a bit of a buzz kill, the game itself is a disappointing mess. The central theme and idea is very cool and totally sold me on playing this, but in practice it just doesn’t work as well as it should, everything is all there sparkly and obediently ready to please but it just doesn’t deliver, sort of like a Pizza delivery driver with directional dyslexia. The game is hampered by some big issues, first and one of my main niggles is the bosses themselves. Considering the game is called Boss Monster I thought that I would have more to do with my big bad, essentially the only power they have is a level up that activates once you build your 5 rooms and then you get a once off bonus effect, some of these are quite cool and a few maybe a tad overpowered but then that’s it, they can’t fight or do anything else. Wheres the epic end of level boss battle that made those old games so cool and swines to beat. Say you construct this epic dungeon and a rampaging Barbarian thunders his way through felling foes and deactivating traps finally staggering wounded and spent into the heart of your dungeon, he rests on his blood smeared sword looking upon the overlord of this lair who cackles manically who then sits on the floor rocking while the confused adventurer jabs timidly at him with his weapon. This is a bit of a deal breaker for me and an epic fail for the designers, this one moment guts out the main draw of this game and launches you out of the theme faster than a German designer with a box of cubes.

So putting that disappointment aside the rest of the game also has some fundamental issues, the randomness of the card draw means that you can get run away leaders. The idea behind this game is to be building this monstrous lair, but if you can’t pull the cards then you are left with ineffectual rooms that you can’t upgrade because you can’t get the cards to allow it. You end up less a Dungeon Master more like some unprepared site manager directing confused contractors about your site “Who built the torture pit next the room of surprised orphans!”

And then there are the spell cards and a lot of these feel over-powered, you start with two but if you don’t get the right rooms then you can’t draw more of them, a player who manages to get a steady supply of these is going to decimate the competition. And going back to the randomness of the room cards its very hard to successfully combat this happening. And finally there are the heroes which aside from a bad draw at the start that can see your ill prepared dungeon getting a pasting can normally be dispatched pretty easily once you’ve managed to get a few rooms down. And it leads us back to the broken room draw mechanism, with you only being able to attract heroes if you have the correct flavor of stuff they want which is this whole randomness at the heart of this game where you very rarely feel ever in control of whats happening.

There is a great game somewhere around this theme with this style of art its just not in this box, and I think that crushing disappointment of wanting this to be the game its selling on the cover makes the discovering how short it falls all the more frustrating. As a simple random filler to be pulled out and played for a giggle then there is some fun to be had, the kids quite enjoyed it, but after a couple of games the voids in the game play where glaringly obvious.

So a warning then, if you dig the box design and theme be warned, there isn’t much game in here and what you get is really down to a Russian roulette spin of the chamber and whilst you can try to aim for a bulls-eye the utter randomness of the card draws means you’ll probably shoot the neighbors dog by accident. This is a great mesh of theme and art design desperately lost in some dungeon labyrinth in search of a decent game design and mechanism. If you are happy to settle for that, then it’ll while away a few hours but will leave you unsatisfied wishing for what this should have been.

Now there is an expansion out Tools Of Hero Kind, and its relatively inexpensive. But even that I find annoying because it contains so few cards, why weren’t these including in this box, especially as by all accounts they improve some of the base games issues. I might take the dive as I want to enjoy this more than I currently do, if I do and I find my opinions swayed then I will follow up with that review. But for now I can’t recommend this as anything more than a cool looking curio.

Alchemists
Be the first to comment!
Leave a reply »