Sentinels Of The Multiverse 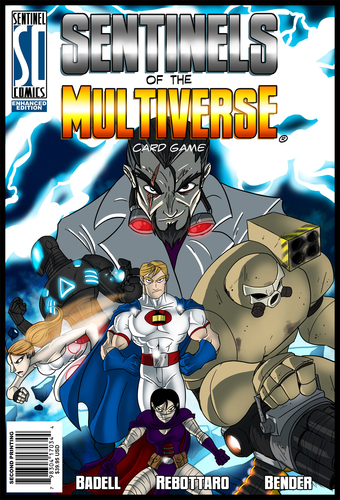 Can get very fiddly.
Lots of bookkeeping.
Text heavy.

Sentinels is a cracking super hero game, it captures the theme of those comic battles far better than any of the other games currently on the market. If you can get over the fiddly nature of the game and the text heavy cards its a rewarding and fun time. And is a lot of fun to play on your own.

I love comic books and have been avidly collecting them since the 1980’s, I even worked/hung around in a good friends store for several years (worked is a very loose approximation of what took place). So yes I’m an unashamed huge comic book geek they are in my blood, if you were to cut me I’d bleed in four colors. And then it suddenly hit me the other day, I didn’t own any comic book themed games which just seemed a bit wrong somehow and so I set about to right this particularly troublesome wrong. And then I was hit by another astounding revelation there really isn’t that many comic book board/card games, and of the few available are they any good? Would they capture that geeky joy of exploring these fascinating and colorful worlds and witnessing the epic battles between earths mightiest heroes? There was only really one way to find out.I’d been circling Sentinels Of The Multiverse for some time, it was either this or stumping up for Upper Decks Marvel Legendary and as a friend recently picked that up it made my choice to grab Sentinels a whole lot easier. The main reason I’d hesitated up to now were reviews deriding its fiddly and late game algebra style mechanisms. With the recent printing of the Enhanced Edition it seemed that now was a good time to see what all the fuss was about.So unlike Legendary Sentinels isn’t a deck builder, in this you start with a preformed deck for whatever hero you chose to fight as. And lets get another thing out of the way as well, this is very much a homage to the classic big Marvel team up comics where the heroes spent four issues battering the speech bubble out of some dastardly villain. This game is all about the take down, that epic huge splash panel throw down between earths mightiest and the baddest of the bad. Its also a co-op with everyone having one thought in mind, beating the snot out of a villain and you are all going to need your combined powers to stand a chance of ever doing this.

The rules are easy, and pretty much involve the villain pulling a card and activating its effects, some of these cards are triggered at the start of certain turns and others at the end, and that in a nutshell is it. The heroes turns are pretty similar with one advantage that each will have specific powers they can call upon dependent on which of the good guys they have picked, all subtle facsimiles of those owned by DC & Marvel with just enough of a twist to offset that large law suit waiting in the wings. And once everyone has had a go a card is played from a nearby environment deck, which may help the heroes, hurt them or apply other modifiers to the fight.

So far so easy right? Well it is and it isn’t, things start to get complicated once everyone has played a card, because essential each new card subtly or in some cases not so subtly alters/breaks the games rules. These can be anything from simple damage modifiers to hero crushing effects that activate at the beginning or end of a turn. And as more of these are played then the complexity of what is occurring each round will become deeper and trickier to follow. I will admit at first to losing the plot mid game as I stared in bemusement at the barrage of card effects scattered across the table coming from not just my hero but also and villain and environment cards. 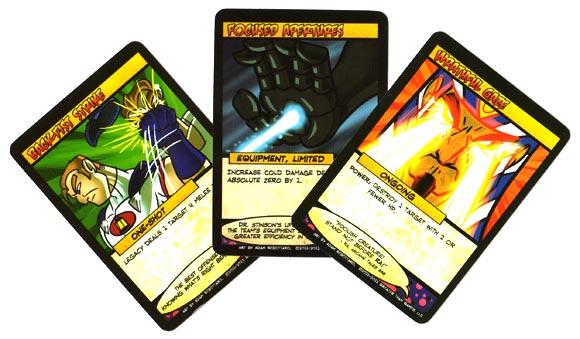 The game comes with a stack of tokens for HP and more for keeping track of the various damage modifiers which certainly help but also add that fiddlyness that had irritated some reviewers. I was really beginning to think this was an awful game and had I bailed at that point I’d have missed out on all the good stuff that comes with persevering against your natural instincts to chuck it all back in the box and settle down with a nice relaxing game of Ticket to Ride. Lets address the big spandex clad elephant in the room, and an argument that has been leveled against Sentinels that does carry some weight. The rule book for the game is slight and is so because all of the rules are on the cards, and for the first couple of games that’s all you are doing, play a card read the new rules, play another card pause for a bit of a read and so on and so fourth. Its only on subsequent plays as you become more familiar with the characters and their individual powers and how the decks work that you can just play the game, and at that point you find out that its actually a huge amount of fun. This captures that superhero mega battle far better than Legendary (which I do like) as you are playing just your character you can become invested in them and when you pull off that combo move or some super heroic action its a real high five moment. When played with a group experienced with what they are doing you can start to combo those powers together, with someone taking on the role of healer and someone else as damage, its sort of like playing a Warcraft Raid.And I really dig the art style, it doesn’t try to compete with the hyper stylized ultra detailed art prevalent in most modern comics its its own beast, it reminded me of the work of Michael Avon Oeming who worked on the Image comic Powers, more akin to a Saturday morning cartoon. I love that the villains all have they’re own special skills and how they interact with their decks, and my group loved the card flip effect, where you can have the bad guy on the ropes only then for his card to be flipped adding a cool thematic twist to the finale. 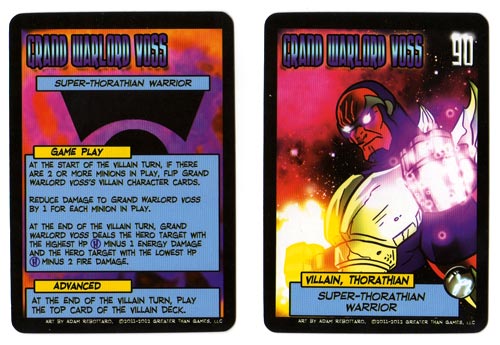 So yes I do love this, even in the base game there is a graphic novels worth of variety and once you start to bolt on the expansions you have a crazy array of choices. But boy this is a hard game to beat, some of the level two villains are ridiculously difficult to take down and the level fours? forget it. Yep it’s fiddly and will require a lot of bookkeeping and to start with you are going to be reading those cards constantly, but this is a game that rewards perseverance, delivering a rich thematic world and characters and at the end of a hard fought battle you’ll have told a cracking story. It certainly isn’t for everyone and can run on a tad long with a larger group, but if you are all in the right mindset and willing learn your characters powers then there is a lot of game in this box which will reward each return visit.So if you are on the fence then all what you’ve heard about this game is true, and if you like the sound of that then you need to give it a go. Its a quirky game and does its own thing, but I applaud it for managing to capture that epic throw down of that big end of comic moment and I enjoyed immersing myself in the universe and the powers of each of the heroes, there’s very little downtime as even when not playing there is so much other stuff happening that you are constantly involved in the latest plot developments. Its a great co-op, you really do need to work together as a team to defeat the big bad, we’ve had some epic battles. Surprised by how much I enjoyed this one, give it a go it might surprise you too.

Robinson Crusoe: Adventures on the Cursed Island
Be the first to comment!
Leave a reply »