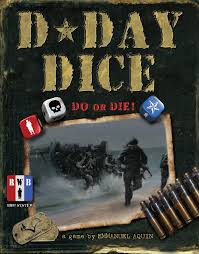 Works better as solo puzzle game.
Long set up and tear down.
Fiddly, lots of bookkeeping.

This is a game hampered by its fiddly nature and too long set up for what is a pretty quick game. As a solo puzzler it is a lot of fun, when played in a group can become a bit of a slog.

As this long out of print and particularly hard to find little devil has recently reemerged on Kickstarter I thought I’d pull out this old review from the vaults. Give it a polish and put it up here in case you missed it the first time.

Having looked at the new edition other than some cosmetic tweaks and a heap of stretch goal content, not a great deal has changed from the 1st edition reviewed here. And never ones to shy away from avoiding any actual hard graft we are now taking a leaf out of the BBC’s book and putting up repeats!

Achtung! Schnell! and other war movie staples. We like dice here at WDR and also a bit partial to the odd war game so look what we have here D Day Dice has both yippee!

War Games! Huh! What are they good for… Well actually they can be a lot of fun but equally also a bit complicated involving lots of tables, graphs and bucketfuls of miniatures, so hello D Day Dice, it has a tiny little board and dice and cards, so that makes it all a lot easier. 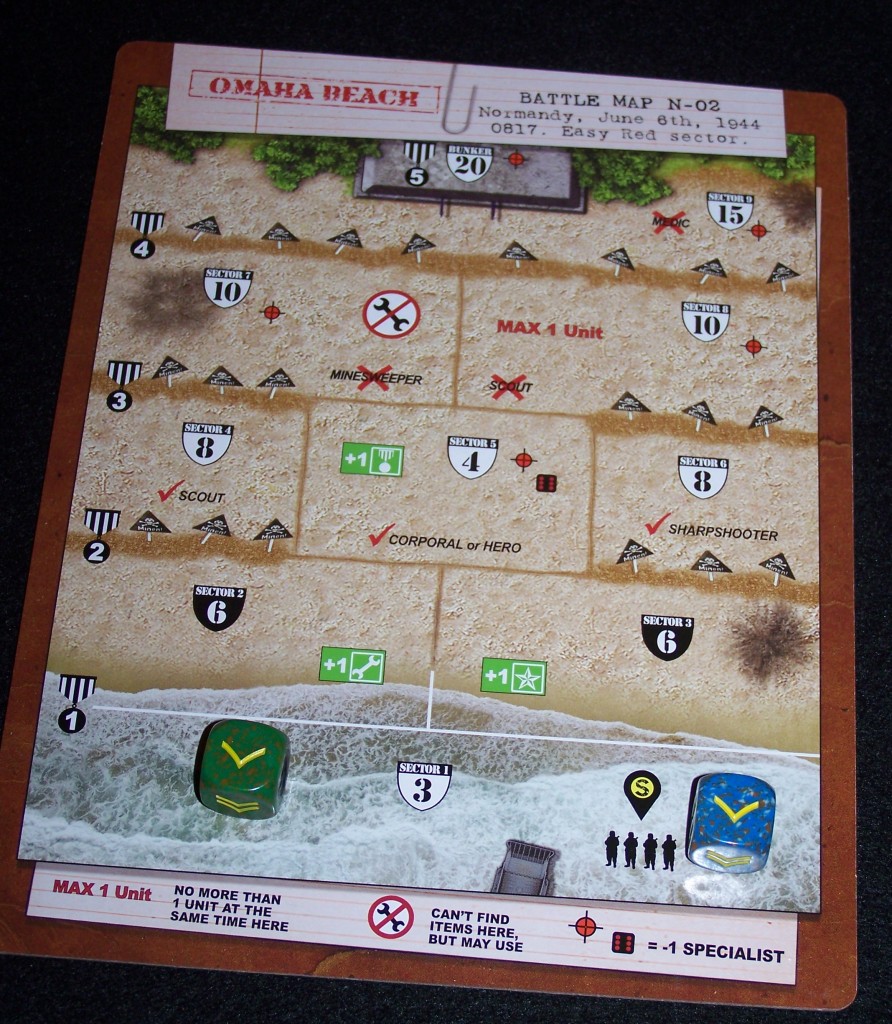 In D Day Dice everyone is on the same side, you play a dicey Tom Hanks and company as you battle your way up heavily defended beachheads and across mountains and coastal defences to reach the Germans bunker at the top and blow them up and win the game.

At first glance, the game looks a tad complicated but it’s really not. Everyone gets their own armies little resource card, it has five spinning dials that you use to keep a tally of all the important stuff during the game and is a neat idea. Basically what you are doing is making your way up the beach and gathering resources as you go, these can be either more troops, courage, tool parts or commendations. 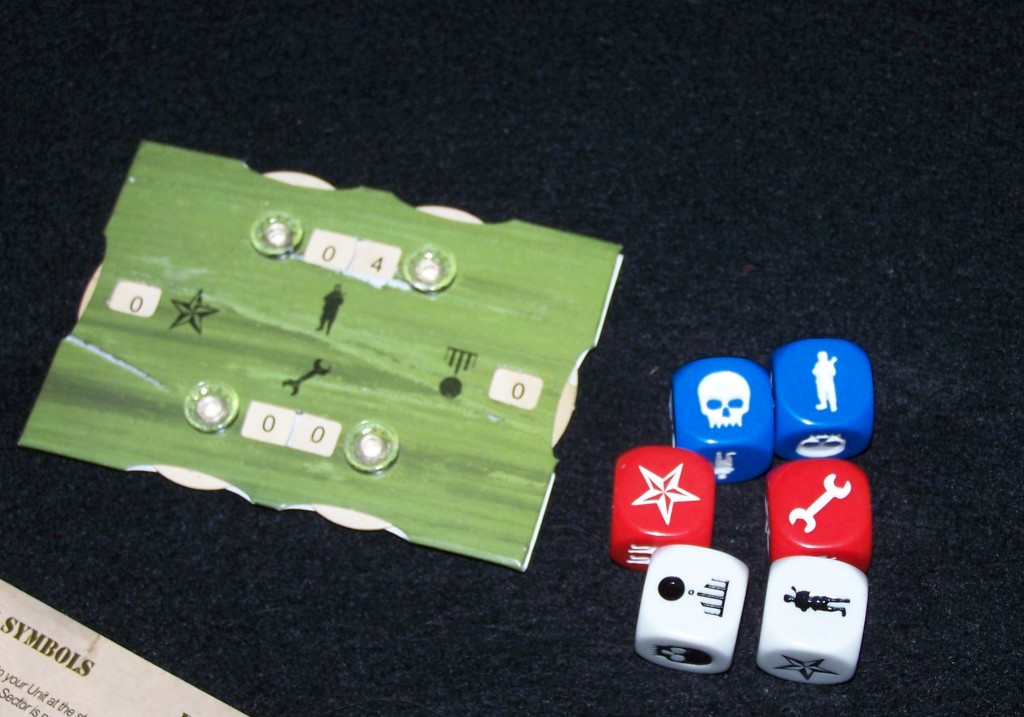 You get all of this stuff by rolling your lovely dice, everyone gets six red white and blue dice and they have various resources like troops or courage on them, every turn these are rolled giving you your stuff. There’s a player aid that helpfully lists all your actions and also the RWB bonuses you can get by rolling complete sets of the symbols in those colours. Like Yahtzee and just about every game with dice since you get to choose to keep or re-roll some of these dice a couple more times before you go with the total, this moves things into push your luck territory as there are symbols that can lock dice.

Each sector of the beach has a defence rating which is the number of troops you are going to lose every turn that you hold that position, there are also other modifiers like Machine Gun nest’s that strafe you DakkaDakka! minefields, barbed wire, and some even require you to have specific equipment or troops. 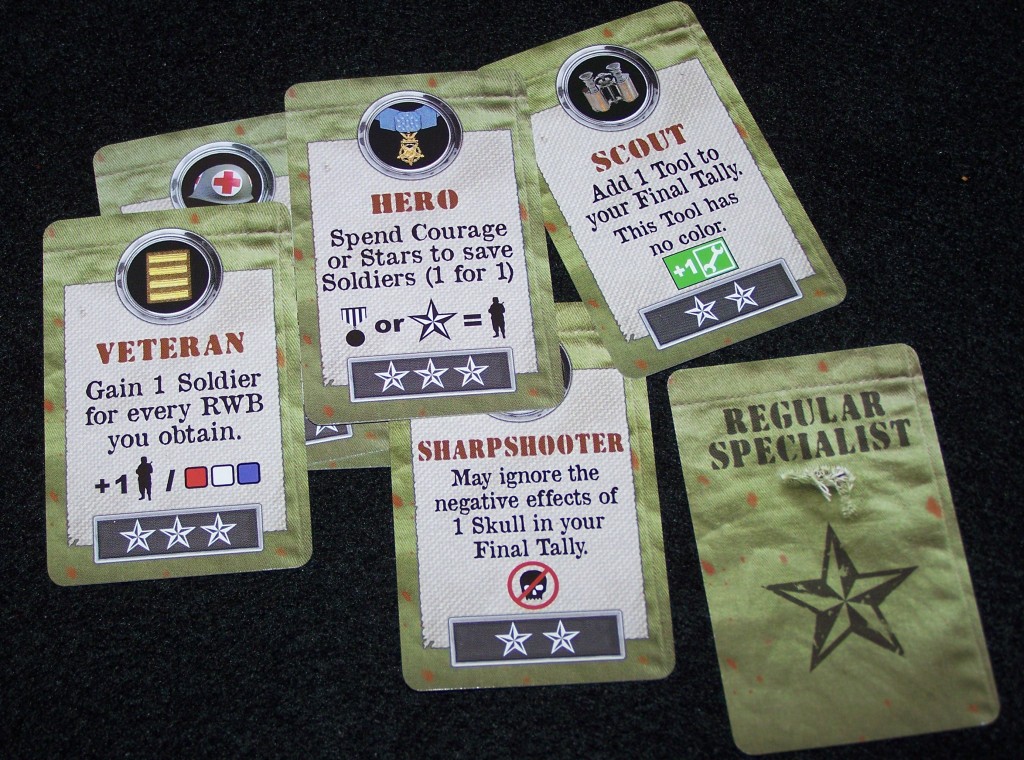 At its core this is a resource management game, you have to balance recruiting cannon fodder so you can survive the withering assault that gets dished out further up the beach whilst also investing in upgrades of equipment or specialist troops, some will open up better routes on the maps. Then its the decision of when to head up the beach, you can wait for three turns in most sectors before moving on and this is usually a pretty safe strategy because the later stages of some of the maps are gruelling death traps.

There is a lot going on in this little box, played solo this is an absorbing puzzle to be pondered over, in a group you need to work as a team assaulting those beachheads, trading valuable supplies and knowing when to hold back. This is not a one-man assault if you charge off unprepared leaving the other units behind your going to find yourself getting cut down, and if one unit dies then everyone loses. It works as a co-op but really everyone seems’s to be doing their own thing and someone always seem’s to forget to update the resource card or move their unit dice on, it’s just a little bit too busy with a lot going on and turns into a chaotic free for all.

So what do we think? Well this is the question really I’m kinda hanging on the barbed wire fence, the components are lovely the graphic design is clear and concise. The manual is a tad jumbled and could make things easier, there are tutorials online to help clarify things much better. Once your other this hump the game is a fairly simple thing to teach and play.

Now wheres that but… Well but.

The set up can drag, considering this is filler territory you have to dig out cards and dice and prepare everything which is a good 5-10 minutes of fiddling about. Then its a half hour blast followed by another ten minutes of break down, not the end of the world but for such a brisk game a lot of its time is spent preparing. As it stands the game is teetering on the brink of greatness but I’d struggle to say where ultimately it fails, it hasn’t enough meat to make it a real strategy game, which is fine but somehow with all the other options in the pot they slow things down too much, leaving it stranded in no mans land. It’s not terrible by any means and definitely, a lot of fun can be had but most games come down to a bookkeeping exercise rather than some glorious derring-do, it’s hard to put my finger on. It’s frustrating because I want to like this more than I do.

I’ve picked up the Atlantikwall* expansion that allows a player to take the place of the opposition so once we’ve given that a spin we’ll see if that gives this the co-op the edge it needs. As it stands this is a great solo puzzler and can be a lot of fun on your own, if you are looking for a co-op then there are better and more fun ones out there.