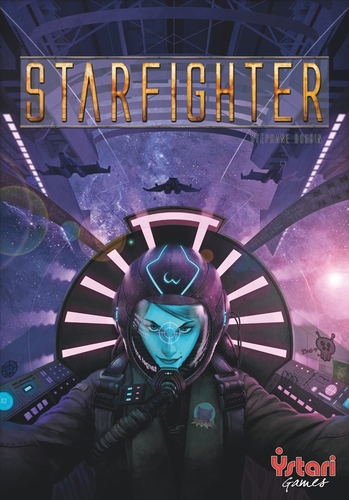 Thanks to my well-known obsession with all things tabletop, every Christmas my friends and family attempt to outdo themselves by seeing what little gaming gems they can find me. Sometimes they succeed and sometimes I get Liar’s Dice.

This year was no exception and with giddy delight, I turned to the neatly wrapped boxes before me and greedily tore at the paper. One of the first I opened was a copy of Ystari Game’s Starfighter.

I do enjoy a good space combat game. I have played a fair few – mainly miniatures games to be honest, but I really enjoy the genre. I grew up watching Star Wars and Star Trek, so the images from those movies are ingrained in my mind. So very little expositions required for why two heavily armed warships need to blow one another up.

Starfighter is a two-player duelling game, where each player takes the role of a commander of a capital ship sending wave after wave of smaller fighters to try and damage the other vessel into surrender. It uses a very interesting mechanic to do so, with the waves of fighters being represented by a deck of two-sided cards and the capital ships being the game board upon which you play. Each board features five different lanes through which the fighters attack and a damage track at the top.

The game is split into three phases – Reinforcement, Deployment and Combat. Players start the game with no cards in hand and instead draw during the Reinforcement phase. They draw equal to the number of draw symbols visible on their deck. These are printed at the bottom of each of the fighter lanes, which means both players take five cards at the start of the game. However, I did state that draw is dependent upon the number of ‘visible’ symbols. As you play cards, you are covering these symbols up, so rushing to fill the board with fighters hampers with your ability to replace those cards. 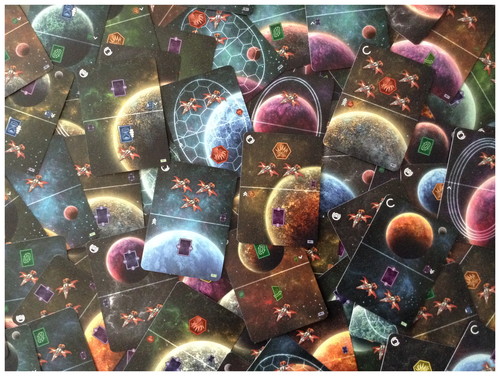 In the Deployment phase, each player starts to put cards down on their board. Play starts with the player who was given the initiative at the start of the game (this swaps between the players from turn to turn). The cards are split into two sections and each section will have the picture of a number of starfighters; symbols that represent a particular game effect; and a code that refers to where the card may be positioned in the attack lane (level 0, 1, 2 and 3). The reverse of the cards are all the same, having an empty sector; a sector with two fights; no special effect and are all level 0 (level 0 cards can be played in any position in the attack lane).

When you play a card, you position it on an empty space on the board. In order to reach the higher levels and the more powerful card effects, you must start building a row beneath it. As cards are played they overlap, covering the upper section of the card that was played before it. Any symbols that represent special effects occur the second they are played on the board. These effects can move cards already played, rotate them and even destroy other cards already in play.

The ability to move a card is very important, as special effects are triggered both when they are placed on the table, but also when they are revealed on the board. As you cover up parts of cards, moving them around can bring these symbols out of hiding and give you a second use of the ability. And whilst the more powerful cards from the deck have to be placed in the highest level of the attack lanes, they can be moved backwards or to other locations a triggered more by these cards.

It is also worth noting that each of the capital ships has a different shape to its attack lanes (there are three double sided boards in the game). Some of these lanes can only hold two or three cards in length and the arrangement of the longer lanes is different from ship to ship.

Players may stop playing cards at any point and retain cards to play on their next turn. If a player stops, their opponent can then play cards unopposed, until they themselves choose to stop. It is then that the Combat phase begins.

Combat in Starfighter is preceded by the capital ships jockeying for position. This means that the player with the initiative is allowed to shift their board a single lane in either direction, allowing them a degree of control over where they can take damage from. This player is also allowed to decided which side of the board to start calculating combat from. 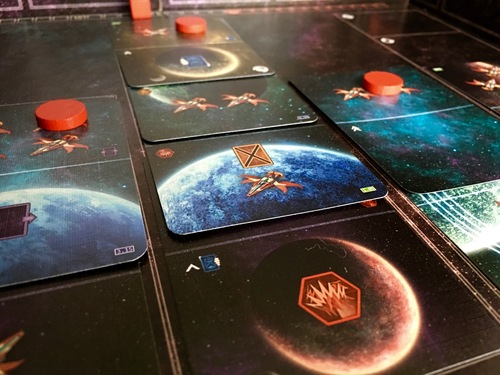 Damage is dealt by players adding up the number of visible fighters in each lane and taking a number of tokens equal to that number. Starting with the player with initiative, these tokens are placed on top of the fighter images one at a time – if all the fighters are covered up, the card is removed and placed in the discard pile. Any remaining tokens are then placed on top of the fighters shown on the next card. If there are tokens left when the final card is removed, these are applied to the ships damage track. It is important to remember that damage tokens are taken before any cards are removed, so the player that attacked second still does their full amount of damage to their opponent’s ships. Any cards that have covered up ships by the end of the phase will count fewer ships for combat in subsequent rounds.

The other thing to remember about the combat phase is that it is another opportunity to have card abilities trigger. Destroy the card on top and you have another chance to move cards to your own advantage.

The game ends if one capital ship has lost all its damage points. There is a negative damage track so that if both ships go below the damage threshold, the player who has taken the least damage then becomes the winner. Beyond this, there are tiebreakers related to the number of ships on the boards and even the number of cards in hand.

My first impression of Starfighter came from the box. That is some nice box art – it is dynamic and exciting. I was pumped to open up and see this continued through the contents. And that was when I was disappointed. The game art is functional at best. The boards are plan black star fields. There is the odd planet on the cards, but the fighters themselves look pretty uninteresting. I understand that you don’t want your cards covered with too much that could confuse the gameplay, but there is nothing there to grab your attention. Playing the other day, a friend glanced at our board state and remarked ‘that looks dull.’ And I couldn’t disagree with him. This is a real shame because getting past the uninspired visuals, there is a really solid duelling game going on here.

This is not simply laying cards on top of one another and looking to score the most points. The core mechanics actively encourage players to find combos within their turn that will become the most advantageous to your side. What could have been a strictly luck based game of drawing the right cards at the right time, is made into a game of skilfully reading the board. Can you identify your opponent’s plans, as well as preparing your own? Is the card in your hand best suited towards sabotaging their play at the sacrifice of your own? Am I best stopping now to ensure more draw upon my next turn? These are all questions you will be asking yourself over the course of a game of Starfighter.

Addition of the repositioning the ships at the start of combat also adds a further layer of strategy and uncertainty. more than that, it actually feels very thematic. If you don’t have initiative, you need to think carefully about how to proceed. You can try to force a move into a position that will favour you in future turns by stacking your ships in a certain location. Or you can spread out on the defensive and try to stop a serious hit getting through unhindered. No doubt this phase does favour the first player, but as the initiative swings back you never feel that it is unfair for long.

And that is one very important part of Starfighter – the game never feels that it has completely run away from you. A player with a full board of fighters is not going to be able to reinforce those ships and is at the mercy of their opponent’s plans for that turn. Therefore, the early rush tactic is usually pegged back quickly. There is no way to force a discard, so a player could aim to try and hit their opponent with a single overwhelming barrage of ships. Every game I have played seems to have gone to the wire. I can accept that this may be circumstantial, but the more and more I play, the more I believe that this game is incredibly well balanced.

Moreover, the game also has three levels of play, with an increasing complexity with each step up. The cards are colour coded, allowing you to play either a Training game, where many of the more complex card interactions are removed or a Skirmish that involves the entire deck of cards. A third mode, Total War, requires each player to own a copy of the game and build their own draw deck to play with, rather than the joint deck the other versions involve. I’m not certain that this pseudo-deck building is warranted here, as the game is neatly self-contained in itself.

Aside from the art style (and the flavour story at the front of the rulebook that frankly adds nothing), if I had one criticism of the game it is that this is not easy to pick up and play. It goes by pretty quickly, but this requires you to know what all the symbols and codes mean on the cards. It strikes me as being designed for experienced tabletop players and getting someone not in the hobby into this, well it’s not going to be easy. The fact that the only text is found in the rulebook may be overwhelming for some. It’s something that could have easily been overcome by the addition of a couple of reference cards. Still, there is always Star Realms for a similar feeling.

Overall, I implore you to look past the visuals. I promise you that this game is not as dull as it looks and really does a good job of an interstellar carrier clash. It takes a genre that has gone many places before and tries to do it in a new way. On the whole, it succeeds and I feel it needs to be applauded for its inventiveness. For a self-contained starship duel, you could do a lot worse. Get on board, I know you’ll be glad you did.