We first encountered Wreck & Ruin at last years EXPO where Tony and Jaime just two of the Hydra-like offshoots of our sinister review operation had experienced a blistering slice of post-apocalyptic mayhem and had loved it!
I tried and failed to get a game in at the show as it was proving rather popular so I reached out to Mark the designer and expressed an interest. Being the lovely chap that he is I was the grateful recipient of a demo copy of the game. 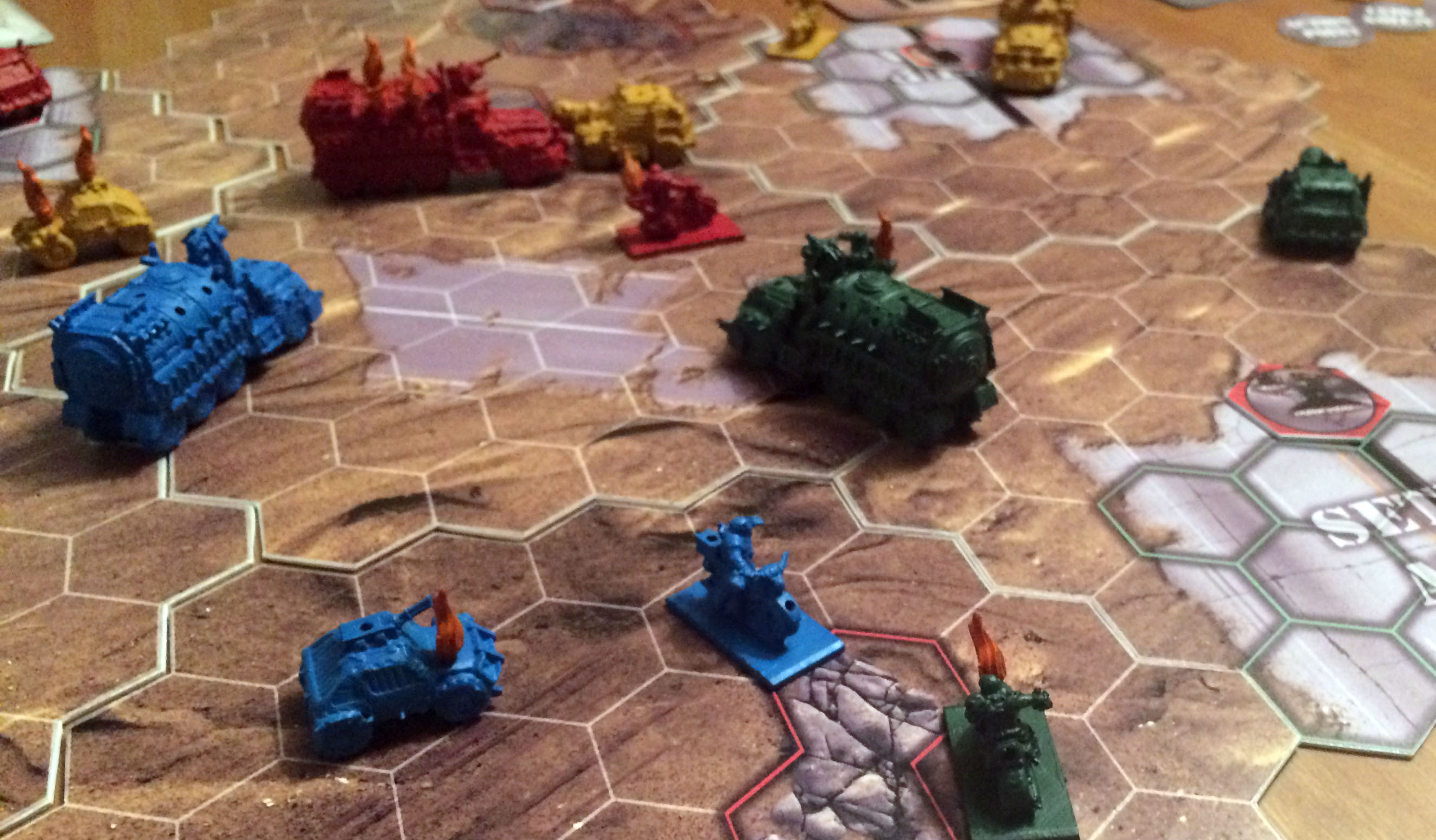 At its heart, Wreck & Ruin is a throwback to the golden age of miniatures combat of the 80’s and my biggest disappointment is that it doesn’t fully embrace that aesthetic with an abundance of shoulder pads and 80’s excess. The one thing Games Workshop did get right back then was balancing the ridiculous of its grim and gritty aesthetic by undercutting it with a healthy dollop of very British almost Pythonian humour and a touch of that is sorely missed here.
With its abundance of dour apocalyptic looking rabble-rousers and muted palette at first glance, it’s all a bit brown and woefully serious. Which I can happily report is in direct contrast to how much fun the game can be, and I wonder if a bit more obvious ‘fun’ up front might have helped sell the experience better.

So the actual game then, let’s crack open the hood and delve into the whirring engine and really dig into its diesel fumes spewing guts. As I alluded to earlier this is more miniatures skirmish than traditional board game and it brings with it some of the great things about those games with also some of the scrap. 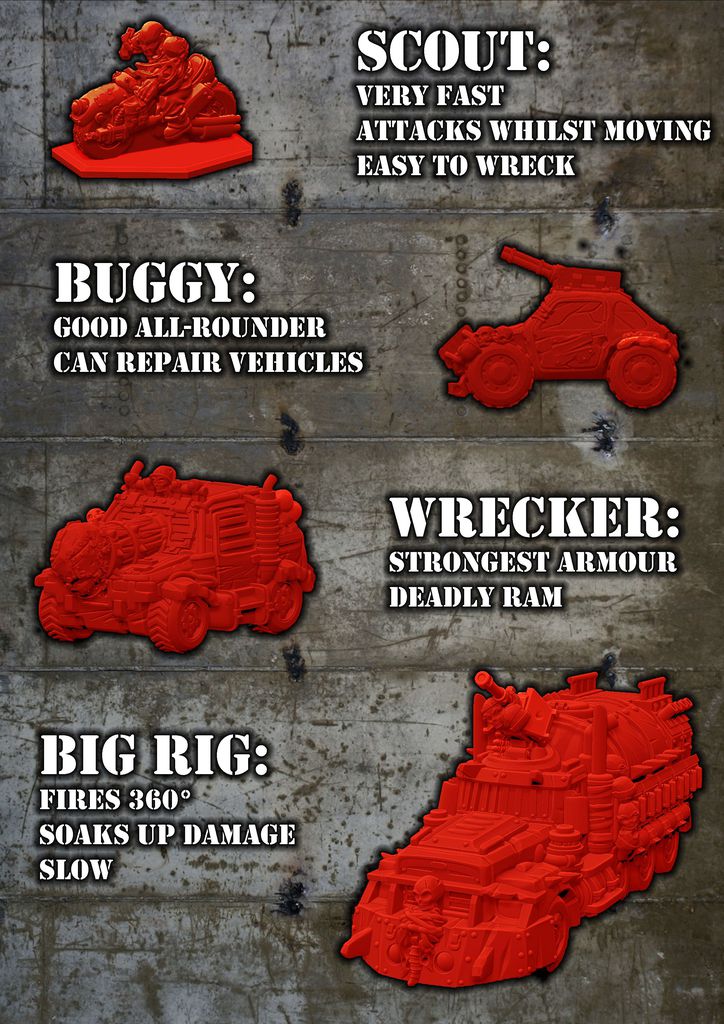 Up to four players can get their destruction derby on each with their own individual clans and special abilities lending the game an asynchronous feel. Which is all fantastic stuff but although many cool and potentially game-changing treats are on offer often they ultimately underwhelm.
As an a, for instance, take the Ruin Army able to deploy a drone as an additional combatant a concept brimming with the promise of much hilarity alas is swatted before it can be anything more than a buzzing distraction. The Desertkin have a similar trick of summoning a large Rhino that can thunder about the battlefield which again feels it needed just a bit more oomph. Love the idea but its execution grinds a gear or two never fully embracing the chaos (think Cosmic Encounter). The game can already be chaotic anyway so turning these abilities up to eleven would have helped each clan really pop.

So the engine of the game is a miniatures skirmish game, each clan has the same vehicles the big fury road rig a trundling fortress, the battering ram truck and then the lighter vehicles for whizzing about the map. To win you need to get one of your vehicles to one of the Salvage Sites (there are four of them at all times) park yourself on top and be sitting pretty on the start of the following turn to claim it, as long as your not shot, rammed or molested in any other way you’ll nab it for your stash. The player with the most at the end of the game will be declared king of the wasteland hoorah!

On your turn, you have five actions to spend on your vehicles in any way you choose the only limit is that each vehicle can only be activated once per turn. Lending the decision making an edge to what and where you make those precious moves. This inevitably means the game turns into a mad dash and grab to get these stockpiles before your opponents can reach them but also serious thought be given as to who is next in the turn order.

At two players things whip along very much a tit for tat with each side riding a razor’s edge of trying to fend off your opponent while also planning the optimum placement to nab the Salvage. It’s fast and loose, vicious and joyful and a whole lot of fun.
With the addition of three and certainly at four this finely tuned fun engine develops a few pops and wheezes, in essence, a whole lot of mischief can take place before it comes back to you.

This turn structure has two noticeable backfires especially at high player counts one is the downtime which becomes especially tortuous if a player suffers from the dreaded AP, and is less Road Warrior more sat on the M3 behind a caravan. And the second is that with four, that player is often placed in a kingmaker situation and towards the death rattle of a game can literally have the power over who wins and loses.

Now some of this can be offset by clan abilities or scrap cards but these are one-shot deals so it’s more a case of deciding at what point is the optimum time to interrupt an aggressive move against you. But these are a finite resource and you never seem to have enough and considering it can be fifteen aggressive actions before it swings back to your turn these cards will run out fast.

The result is games can devolve into almost separate two-player skirmishes with the clans at the extents of the turn order rarely coming into direct confrontation. It’s hard to see how this could be avoided aside from completely reworking how many actions or how its decided who goes first each turn. It’s not a deal breaker by any means but it’s clear the game shines when played as one vs one. 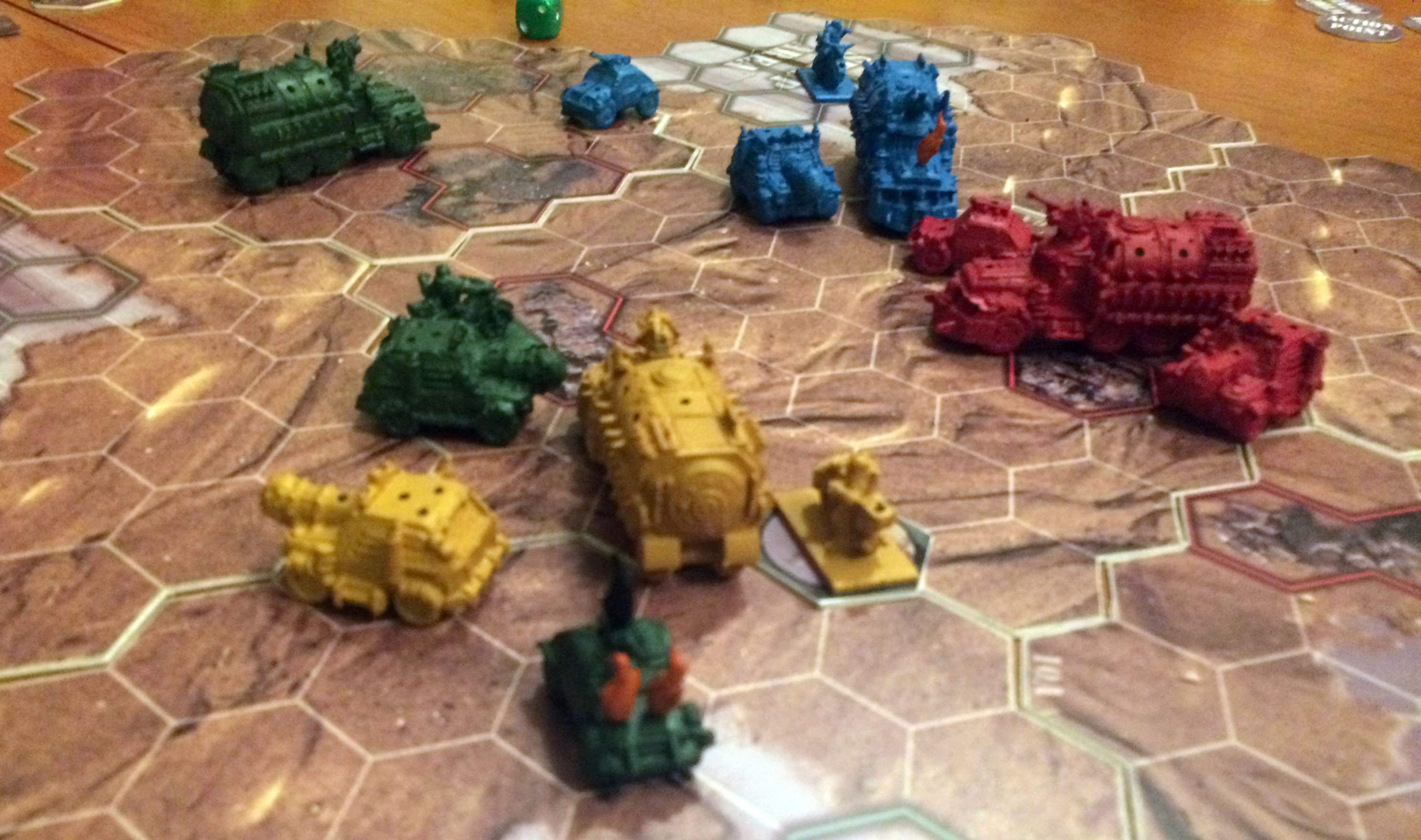 Anyway, there are my gripes out of the way, everything else is pretty damn cool the minis are good and chunky obviously mine are preproduction but I can’t see how there would be a massive drop in quality in the final version. The fire and smoke pegs to highlight damage are a nice touch, maybe a tad on the fiddly side but it’s helpful to have that information available at a glance without having to continually sneak looks over players shoulders.
And the combat (probably the most important aspect) is sleek and thematic and the exploding dice never hurt (a favourite mechanism of mine) the whole system does a great job of capturing the hurly-burly of vehicular combat without becoming mired in too many stats and table lookups.

And that’s Wreck & Ruin as a two-player miniature skirmish game it’s a solid little beast and if that’s what you’re looking for then this more than delivers, with the additional third and most certainly with that fourth player for me the fun sort of stalls out. Still, this is early days and the best thing about Kickstarter projects is they can be a collaborative affair so nothing is set in stone potentially a tweak could be applied to the higher player count game to smooth over some of these issues. With the rise in skirmish games, there is certainly a place for Wreck and Ruin at a lot of tables so go take a look and see if it’s for you.