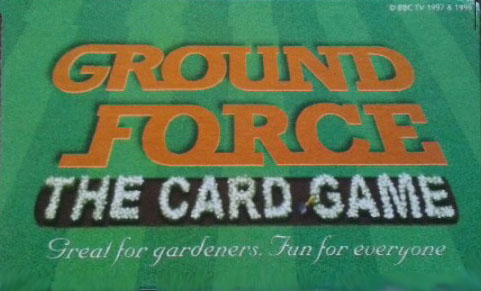 I am shocked to say, this is possibly the best licensed game I’ve bought from a charity shop so far.

Ground Force is a game for 2-4 players, each of whom start off with a three-by-three grid of cards representing a smashed up garden. 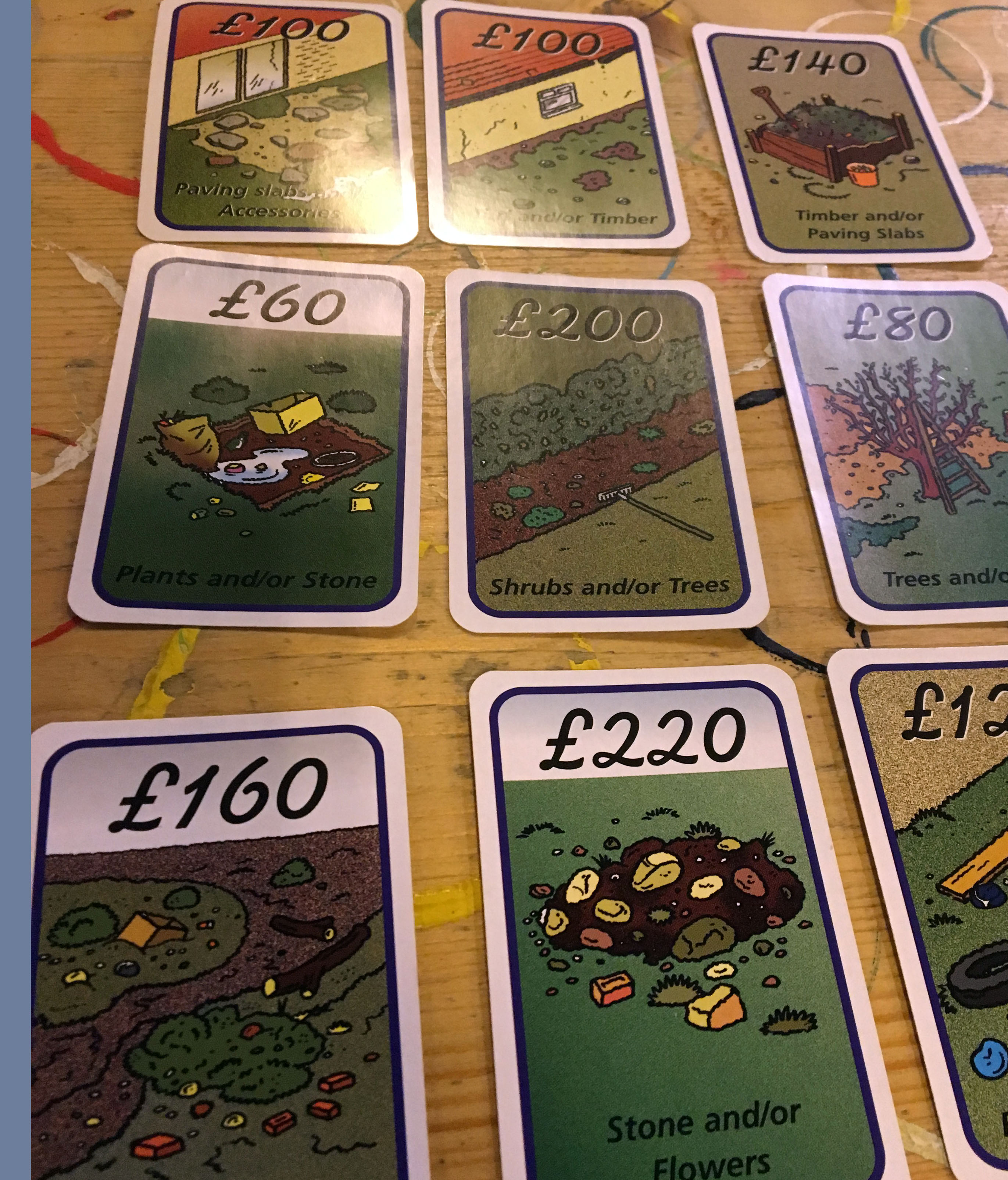 Look at it. What a mess. There’s a tire, there’s litter. I can only assume the neighbours chucked anything they didn’t want in here before I bought the property.

Each card has a combination of components on it and a cost, each of which is slightly different for each player. These are the gardening supplies you want to be able to play from your hand, along with the minimum cost that they need to be. 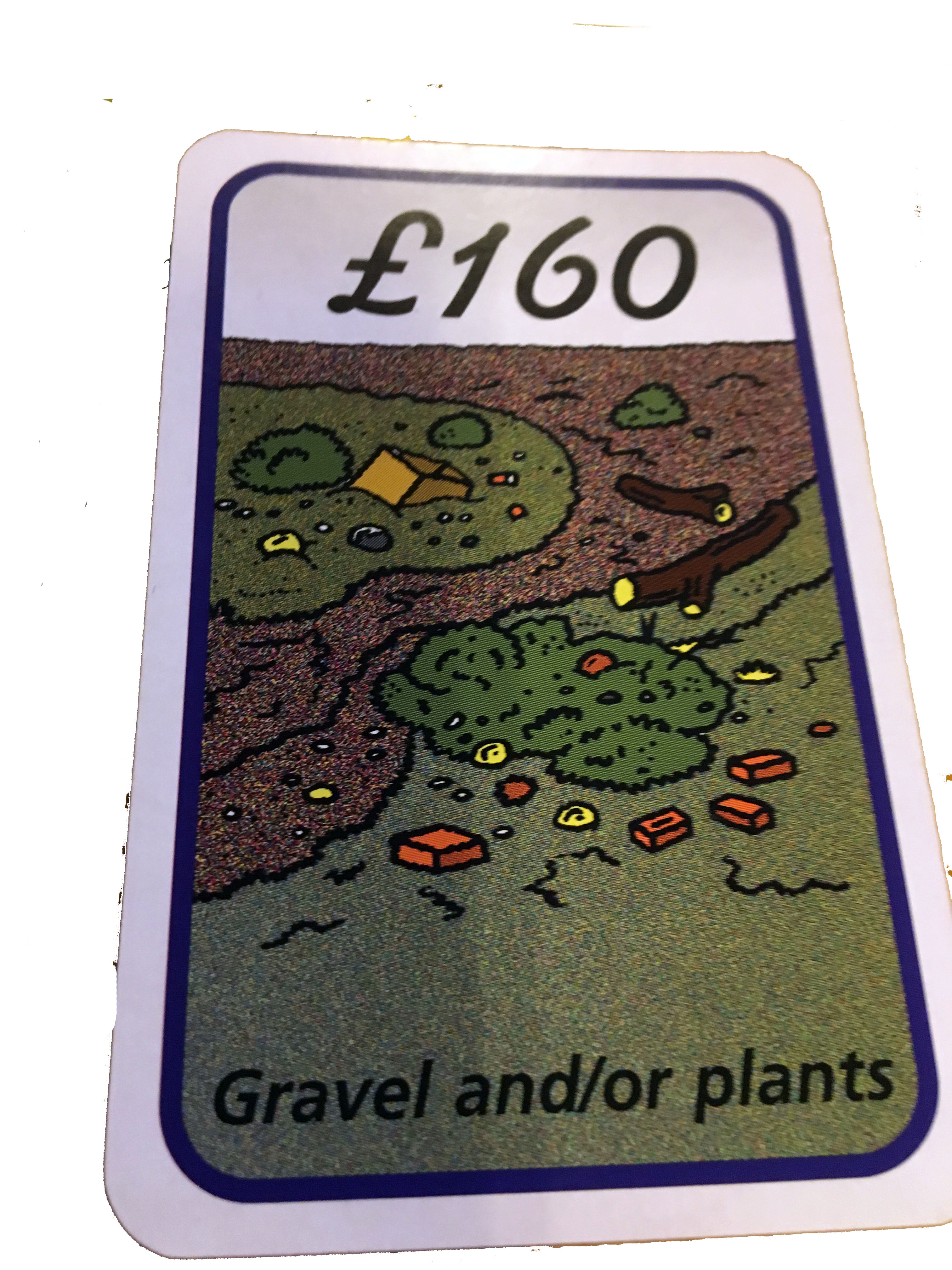 In my first turn, it was nice and easy. £120 of Gravel and/or Plants? They were already in my starting hand. Boom, job done. I drew back up. I was playing with Emma, a fellow fan of this game, but also Arthur and Sam who’d never played it before. They looked at their hands and Sam asked about the simplicity and lack of competitiveness in the game. Oh, so naive, Sam. So naive.

The first turn was over and those of us lucky enough to have the necessary components were able to repair some of their garden.

The thing is, most of what you want won’t be in that hand, it’ll be in the deck which is face-up as the ‘garden centre’. You can buy the top card by selling a card from your hand and placing it in the discard pile or ‘skip’.

This is where things get interesting. On your turn you can repair your garden, you can buy one card from the garden centre or buy the top card from the skip at half price. This is where the competitiveness comes in. The components people need are visible on their garden cards, so you can load up the skip with rubbish the next player doesn’t need. You watch the Timber card you’d love from the garden centre fly by as someone buys it or draws it into their hand after completing a section of garden.

I got stuck into making some bad plays on my turn and ended up resentfully building my orchard. An early game obsession with Gravel turned into it being a chaff currency later on. It’s mainly a cheap card though, so I had a ton of gravel stuck in my hand, buying my way slowly up by hoarding Accessories from the skip.

The game ends when the deck runs out or one person completes all nine cards, so it doesn’t stick around too long. For me, it was too late. Sam and I were last with only four sections of our gardens complete. I’d turned the abandoned tire into a nice rockery and could wander my hate-filled orchard. Arthur, who’d never seen the show and probably has the wrong ideas about it after all our swearing, had six. Emma had managed to play me a bunch of times, talking me into ditching cards I wasn’t keen on but perfectly served her purpose. She had the full nine, the only nice garden in our village. 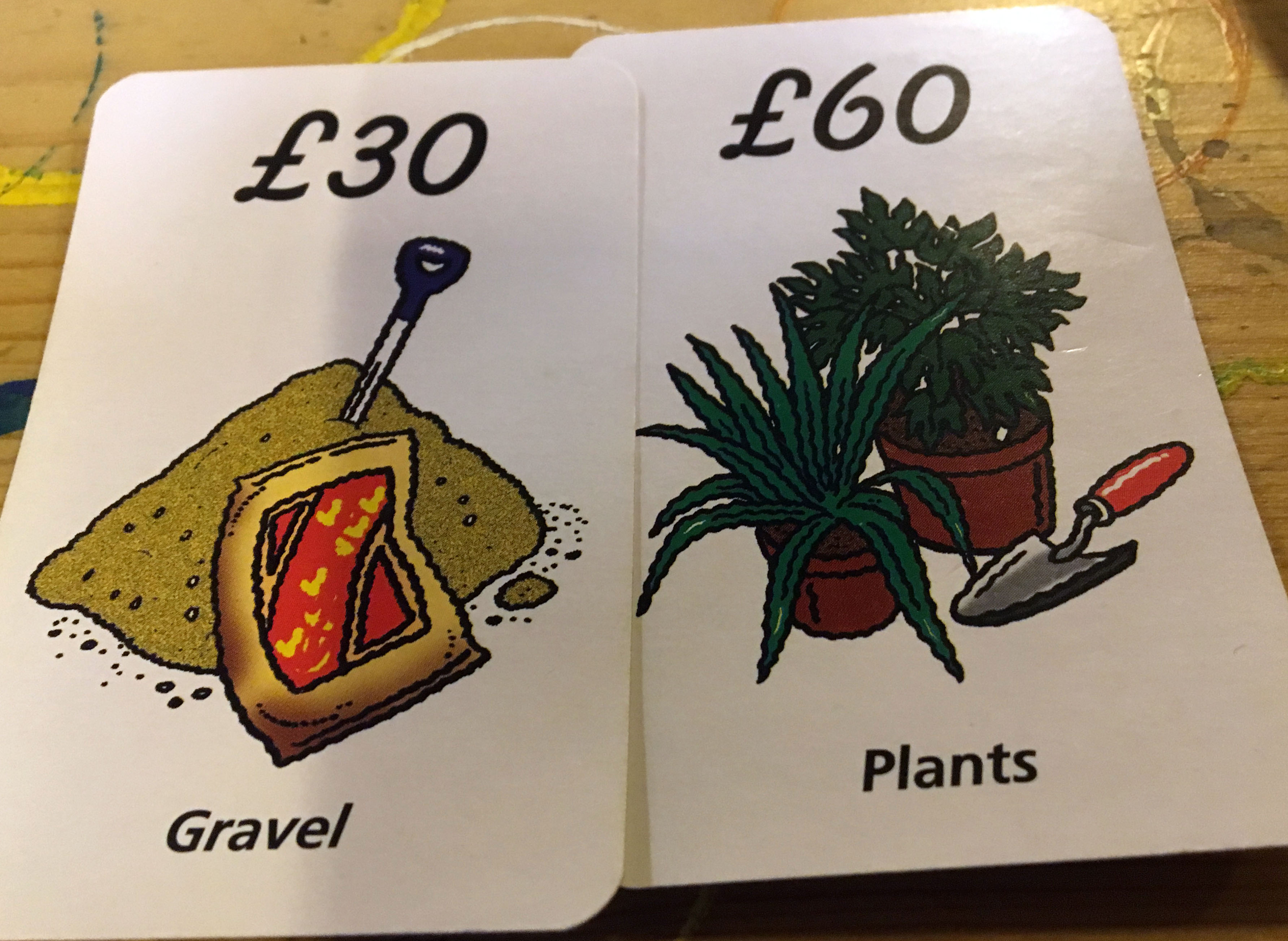 As far as theme goes, it’s not as artful as Cottage Garden, it more represents the chore of having to go to the garden centre and fix up your shithole of a garden. It works really nicely and fits with other small filler-ish card games in my collection. The box is a little bigger than necessary and it lets its crap charity-shop fodder show as the rules are entirely printed on the sides of the box. 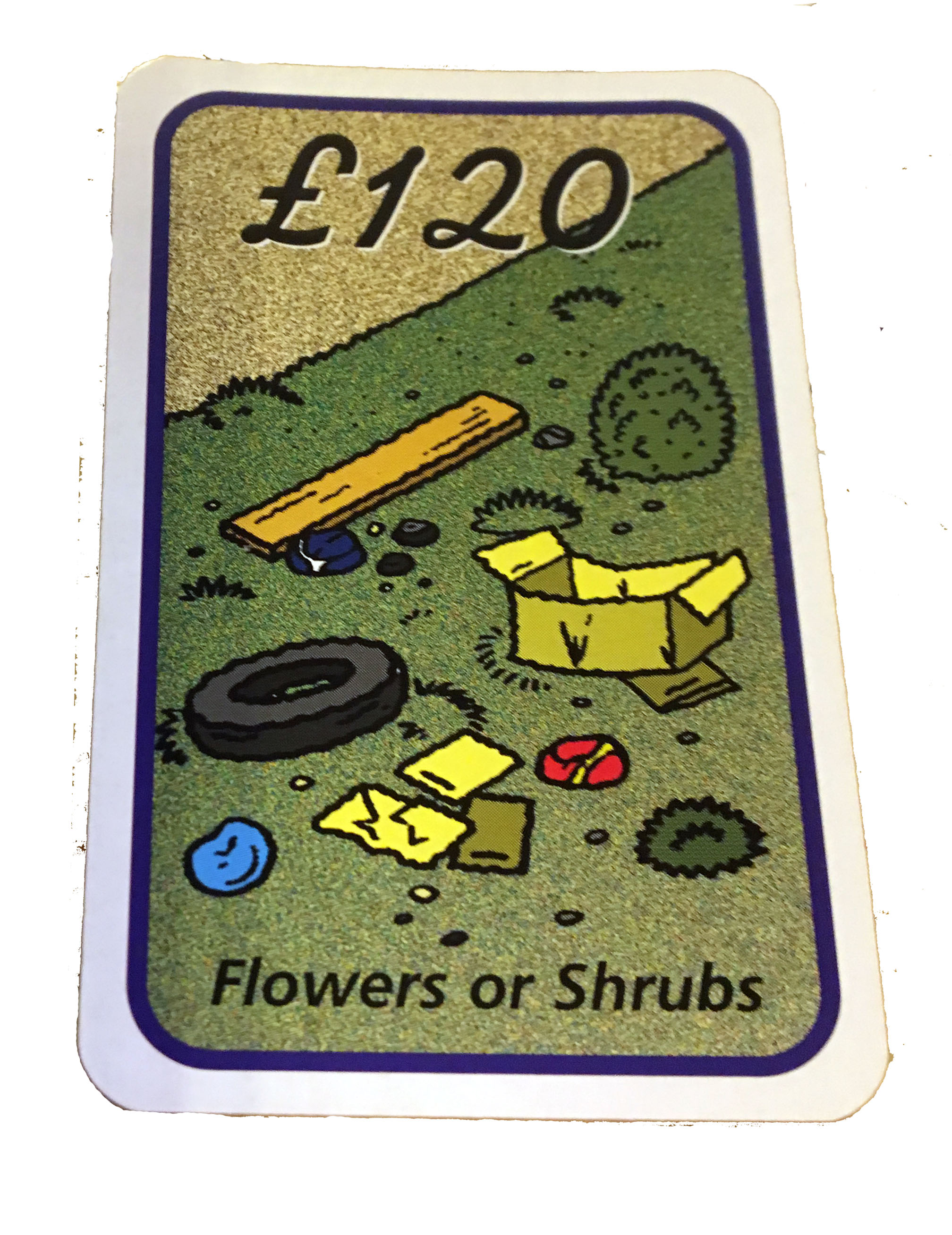 Susan Prescot Games mainly made jigsaws and occasional other television-based board games. I know they made the bad UK version of the Buffy board game which I kept nearly buying when I was trying to get the Hasbro version . A quick Google shows they’re now closed after a prolific run of licensed games, so even though they’re gone now, I’m sure I’ll encounter them again.

I admit I assume this is the kind of event where the company lucked into a game. There’s no mention of a game designer being involved so I couldn’t say whether this is someone who went on to do more or if they peaked here. The garden centre & skip mechanic is really nice, there’s a satisfaction in flipping the wrecked sides of the garden to the correct side.

I’ve seen this in charity shops and at bring & buy stalls in games conventions. If you’re after something light and garden-based, it’s worth your time.

So far this is the reigning licensed charity shop board game and Lost is the worst. These shall be the ones I’ll be comparing any future purchases with to see if they can be beaten. 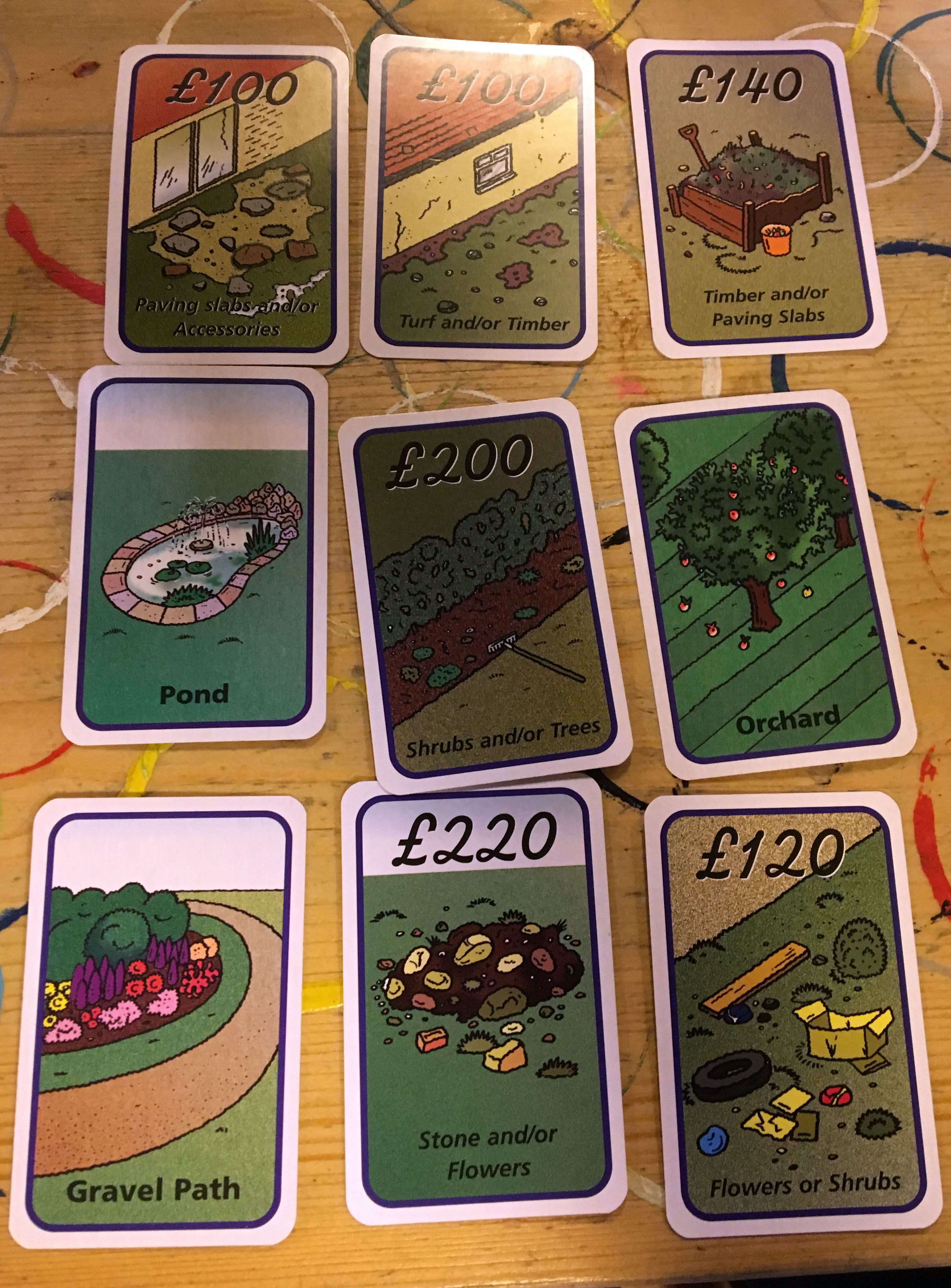