Battle of the Austen: Matchmaker Vs Marrying Mr Darcy 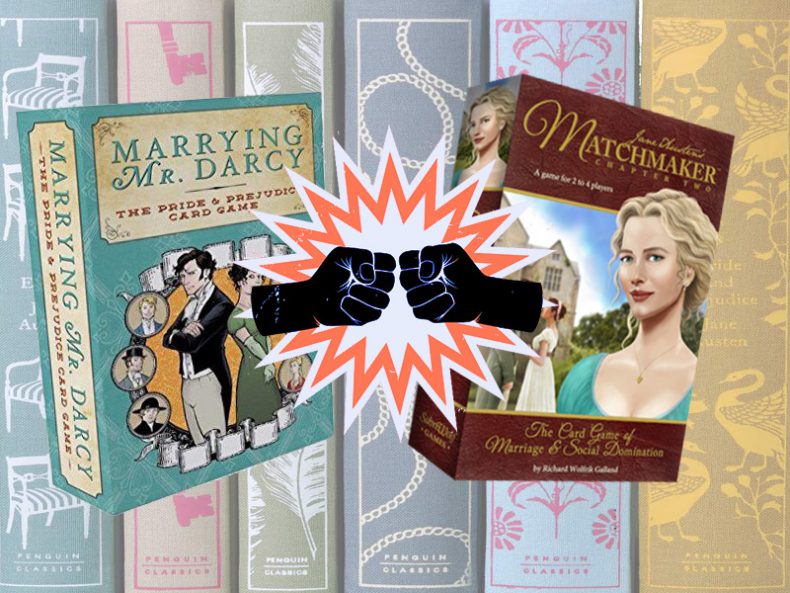 So apparently Jane Austen is a genre of tabletop game… Who knew?

Actually I did. I’m a fan of Jane Austen, I’m dating a much bigger fan of Jane Austen. When people started talking about these two games I knew buying Marrying Mr Darcy and backing Matchmaker would be an inevitability. The thing is, these are both card games, so I wasn’t sure if there would be much of a difference between them. I’ve tried them out and thought I’d carry out a bit of an examination.

Marrying Mr Darcy is by Evensen Creative and has the more narrow perspective, being based entirely around Pride & Prejudice. Players take control of one of the women from the story; numerous Bennets, Charlotte Lucas, Caroline Bingley or Georgiana Darcy, then try to develop their characters enough to attract suitors. The game consists of a lot of cards and a six-sided die.

Jane Austen’s Matchmaker: Chapter Two (which I’ll just call Matchmaker from here on out), has each player take the role of patrons working to pair up ladies and gentlemen between players, gaining the most prestige as they do so. This game consists of a lot of cards and a pair of six-sided dice with special symbols on.

“A Single Man in Possession of a Good Fortune, Must be in Want of a Wife”

So how do you do the things you do? Specifically in this case pairing folks up?

Marrying Mr Darcy keeps things in the perspective of your specific lady. They start with points in a statistic, although they’re not all balanced out. Elizabeth Bennet doesn’t want for Wits, while her sister Jane has a good deal of Friendliness. Their younger sisters are all fairly rubbish in their stats, but have fun abilities which fit their character; Mary Bennet can skip events to read a book, Lydia steals things from parties. These statistics are what you’re trying to develop in order to have a gentleman propose to you. Each turn you draw and resolve a random event card. These could be anything from a backhanded compliment to a ball, to an elopement with Mr Wickham! How scandalous! Most of these allow you to play one of the character cards from your hand to add to your stats or your hidden Cunning score. 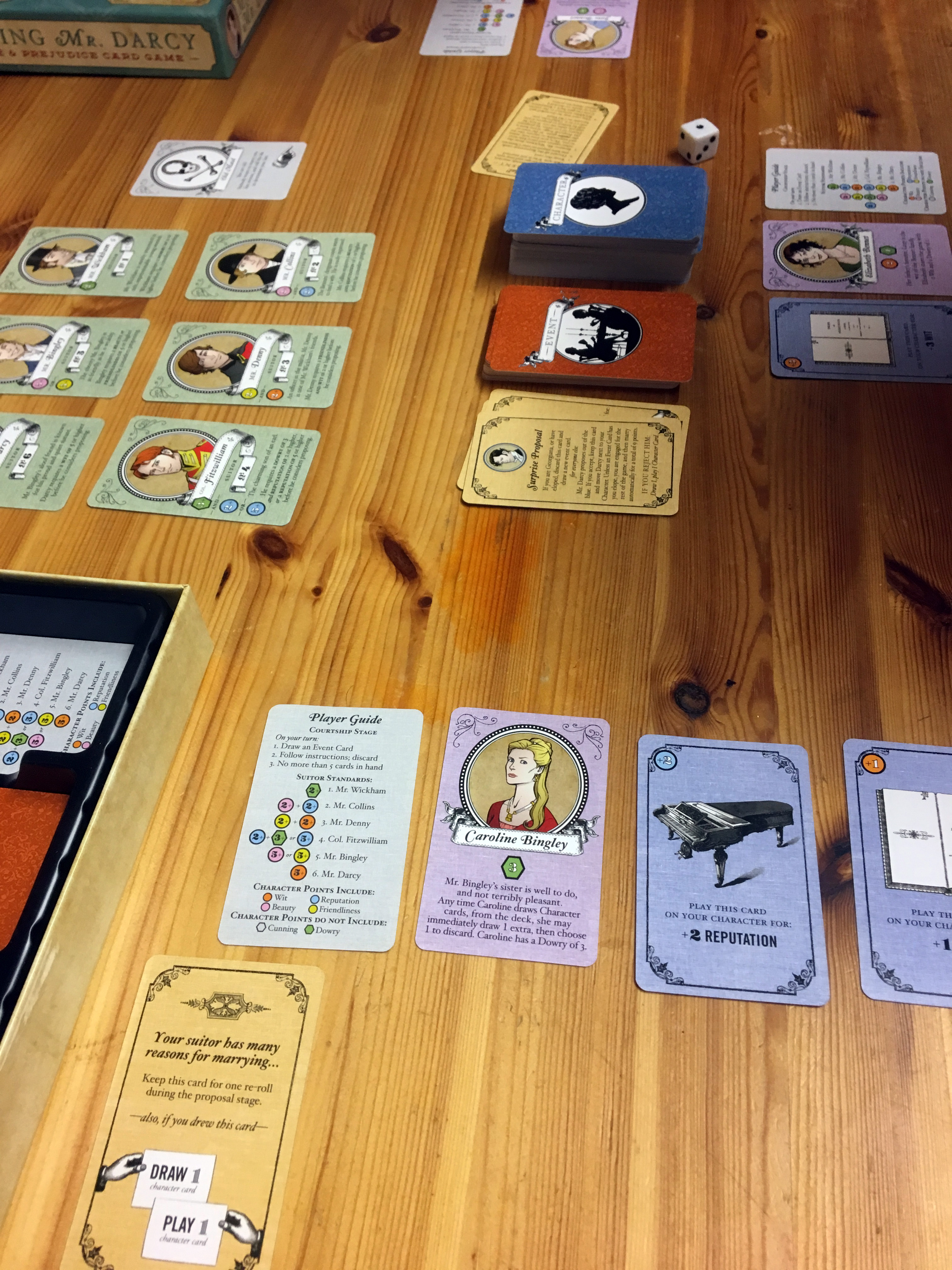 Turns are pretty quick like that. Draw a card, react to it and move on. Balls and parties tend to make everyone roll a die to see whether they get to dance with someone impressive like Mr Bingley, or end up sitting out every dance due to a lack of men. An elopement or spinster life taking to you may affect the endgame of yourself or anyone else. Some cards may take a gentleman off the board temporarily or for good. One of the games I played of Marrying Mr Darcy ended up with too few gentlemen, so at least one person would end up an old maid.

Oh yes, you can end up an old maid. There’s a row of marriageable gentlemen starting with the worse and less-demanding prospects (Wickham and the odious Mr Collins), going all the way up to Mr Darcy. When the event deck runs out, whoever has the highest Cunning gets first punt at the bachelors. Your stats dictate whether they even consider proposing to you and then you roll a die to see if they’ll actually do it. You can accept the proposal or move up, narrowing your prospects. If you’re brave, you can aim for only one gentleman, gaining a bonus to your roll (along with any bonuses from event cards you may have accrued).

If you fail to woo any of the bachelors, you end up an old maid and have to hope you roll high to score well. It’s totally possible to win as an old maid, but it’s a gamble.

Each of the ladies scores a different amount of points, depending on their ‘canon’ match and characters who they may be happy with. This means that you might all be going for different characters, but may still have to compromise and tread on each others’ toes when it comes to the proposal round. Our first game was a near perfect canon match, but I’ve only seen if get ugly after that point. 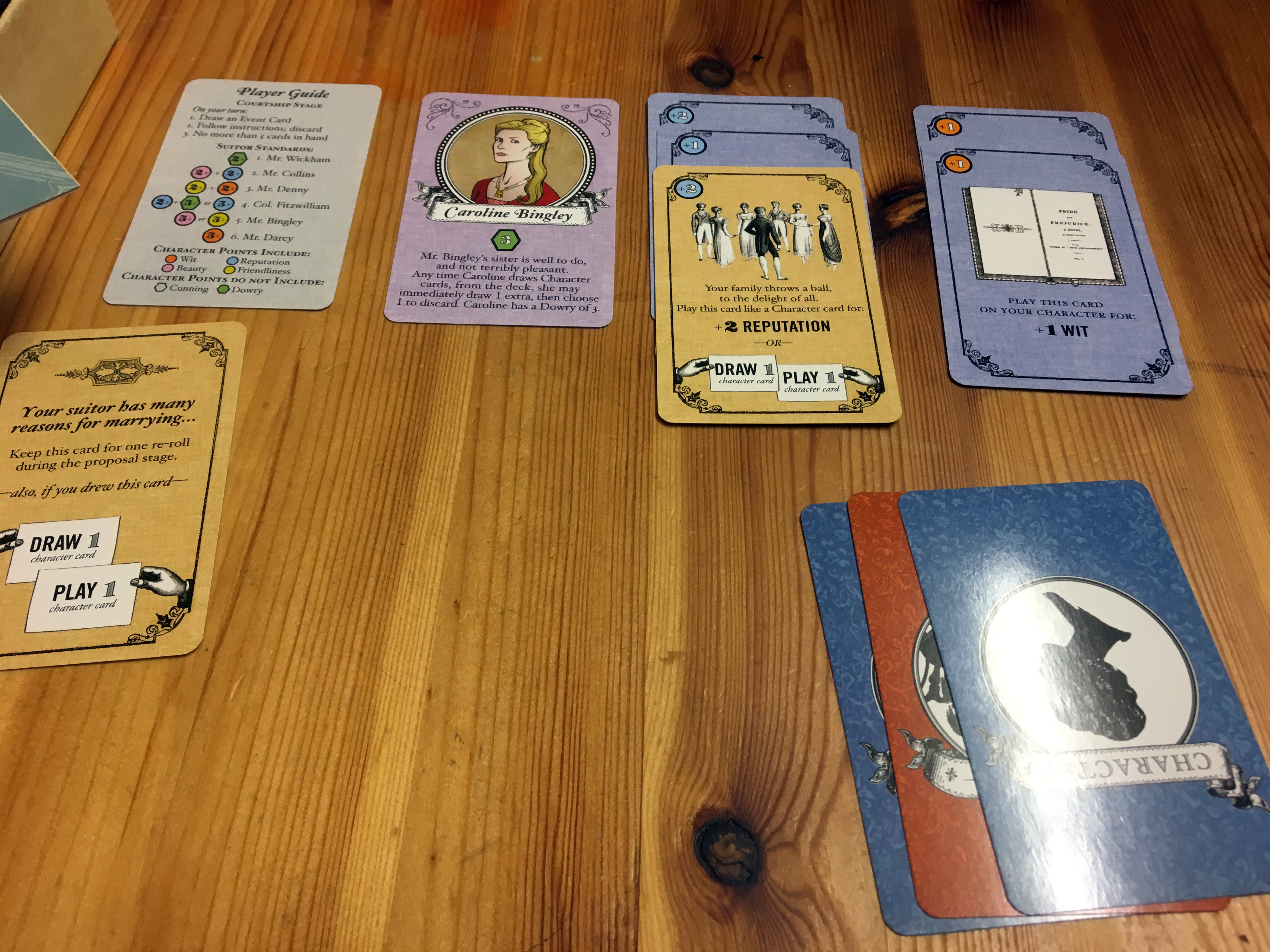 One of the interesting things about the scoring is that marrying Mr Darcy (or whoever) is only half the battle. All those character points you were developing during the game? Those also score points. All apart from your wealth, because that’s not what this is about. The more witty, friendly and attractive you become, the better you are. This means you might end up with the toad in human form, Mr Collins, and end up winning because you were the better person about it. For a simple ‘draw and do stuff’ game, there’s a lot to it.

Next contender is Matchmaker. This one’s quite different.

You have your ‘Society’ made up of four characters, who have to be some combination of ladies and gentlemen. They have stats in each corner of their card; Charm, Virtue, Rank and Fortune. They also have the one of those stats they fancy the most. On your turn you need to try and find a match between one of your society and one of someone else’s. These characters are from most of Jane Austen’s stories (sadly the Kickstarter didn’t reach the level where Lady Susan was included), so there’s the simple ‘no matchmaking people with the same surname’ rule to avoid any Lannister-style shenanigans. 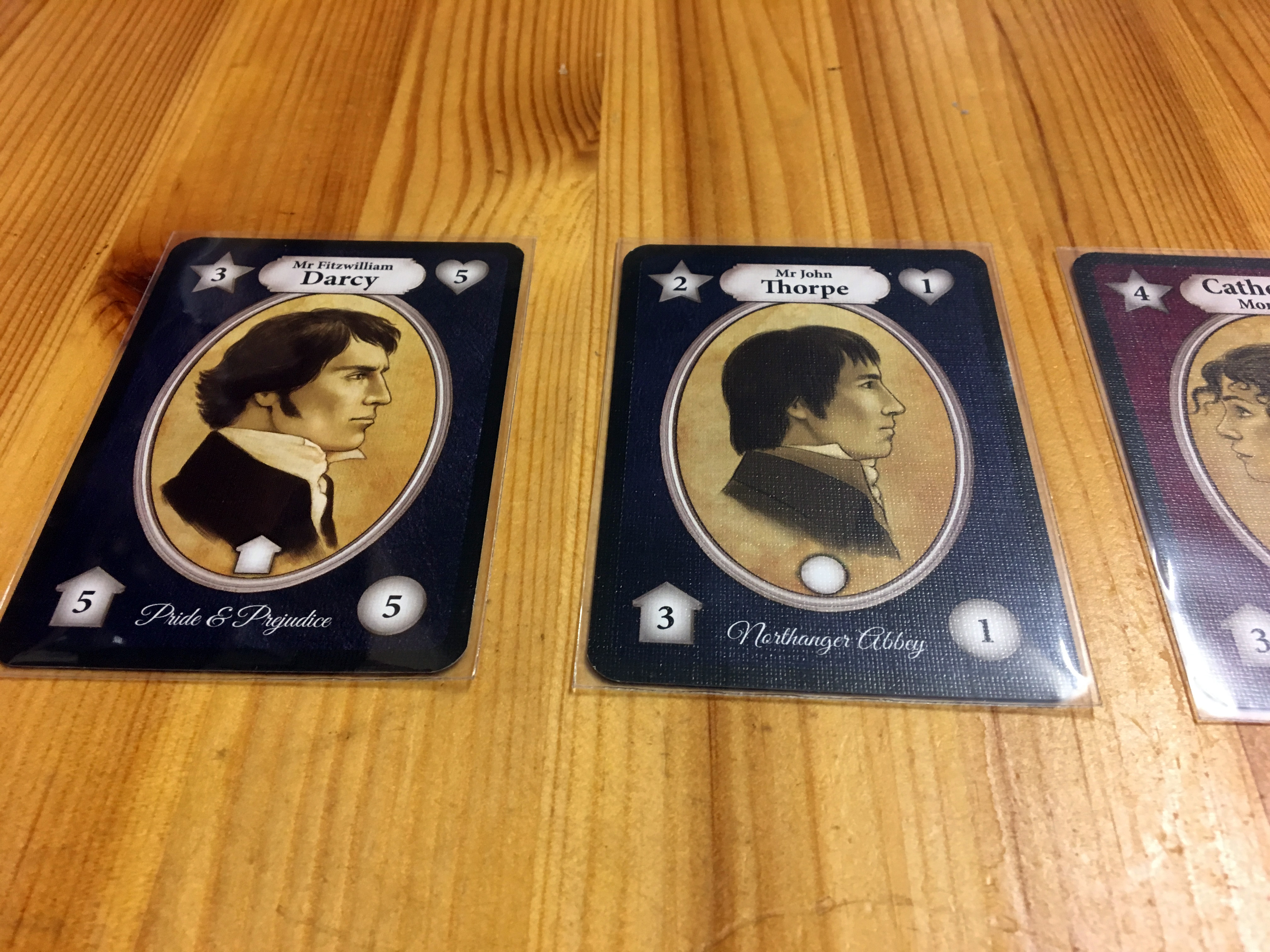 If you make a proposal for your Elizabeth Bennet to marry someone else’s Colonel Brandon and the match is accepted, you roll the special dice and score Prestige equal to the stat symbol you roll on the other person’s card. If you roll a question mark, you use the stat your character fancies the most, so you can try and play the odds that way. Both characters are discarded to a happy life outside of the game and then you both draw an Influence card.

The Influence cards include Patrons and Hosts. Patrons approve of matches, adding a second stat to the Prestige you score. This makes it a little risky to carry out matches with people who have a big hand of Influence as you might score them more points than you get. Hosts are played instead of your usual matchmaking for a round. They allow you to swap any one of your characters for any other player’s character. Those characters are left face down until the start of their players’ round as they’re a bit knackered from the journey. 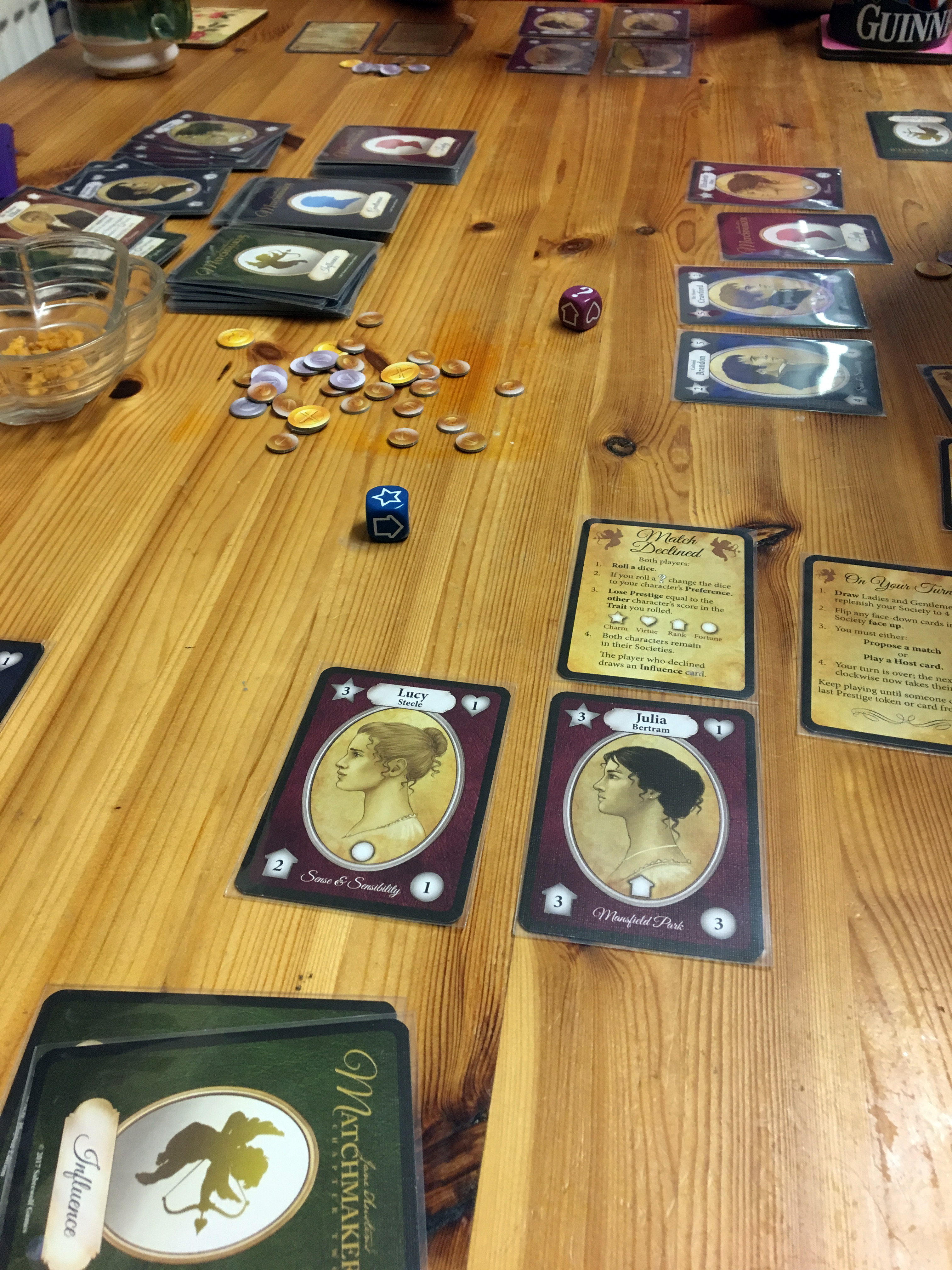 You need to spread the love between players to try and keep their score low, or maybe bargain away your dud characters (I’m looking at you Lucy Steele you piece of garbage!) with anyone’s better match because let’s face it, they’re not getting any better offers right now. Refusing a match loses both players Prestige, so sometimes you need to accept through necessity.

The game carries on until one deck (Ladies, Gentlemen, Influence) or the Prestige tokens run out.

“Business, you know, may bring money, but friendship hardly ever does”

The world of Jane Austen’s fiction sounds like one free from conflict, but is it, really?

You’re not going to see people get messed up in this game; not physically, at least. Marrying Mr Darcy requires waiting for the right opportunity to strike. Any Cunning cards can be used to add to your initiative when it comes to getting first dibs on a gentleman, or you can use it to ditch other people’s character traits. It can be mean, especially for a high-scoring character card late in the game, but all’s fair in love and war. You can play the occasional scandals on people to sabotage their efforts.

Matchmaker is a lot more about screwing over your friends rather than outward war over men. You need to smile at your enemy and keep the knife hidden behind your back. Proposing matches which are less suitable to the other side or using a low-score person to slip in the approval of a high-scoring Patron. You can try to snatch out people your opponent wants, making a slightly worse deal for yourself in order to screw over their chances. And then there are the Host cards, where you can offload bloody useless Lucy Steele and get Anne De Burgh into your Society. She’s bound to get a good suitor, possibly even the person you stole her from, just to try and score a couple more Prestige points.

Eleanor went to her room, where she was free to think and be wretched

So what are the flaws of each game?

Marrying Mr Darcy is a bit basic in play. It’s got a bit more focus and theme, but ‘draw a card, play a card’ feels a little simplistic. Sometimes a random card might take the suitor you’ve been after away from you and there’s not really any control over that.

Matchmaker is a little too distanced from the story itself, from investment in the characters. They’re just cattle you’re sending off to market, instead of ladies and gentlemen who you’re wedding to one another.

Both games have been played with Jane Austen novices as well as veterans. While there’s a good amount of table talk about how good or bad pairings are, especially in Matchmaker, both were enjoyed by the rookies to the Austenian oeuvre. The newbie who took part in both games said that he felt more out of the loop with Matchmaker as there were more characters from more books. It wasn’t as bad as when we made him play the Da Vinci Code board game (yeah, that exists and there will be a review in the near future).

So who’s the winner of this contest?

Who said there has to be a winner or a loser? These are both good, light games which don’t take much time or space. There’s more tactics in Matchmaker, but more character in Marrying Mr Darcy. If you have to pick just one, then hopefully this has been a helpful guide. As a sucker for Austen-themed games, I admit I’m an easy sell on this and will probably test them out on people in the future. If I’m playing with people more hesitant about the theme I’ll probably try Matchmaker as people can be further removed. I’ll probably be more of a Marrying Mr Darcy player as it’s fun developing a character, even if you’re more at the whims of random cards each turn.