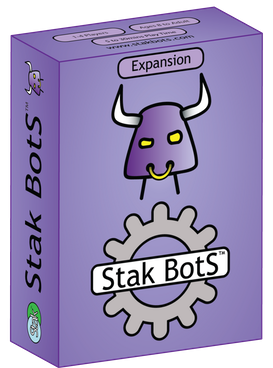 Its more Bots, Bots are good.
A bunch of even more ways to play.
So inexpensive its rude not to own it.

Now on its fourth upgrade Stak Bots continues to be one of the best bangs you can get for your bucks! Easy to teach, quick to play and endlessly inventive and fun!

Stak Bots is something of a family affair, it’s a series that has grown up with my kids it was Ollie my now teenage son’s first board game crush. It’s hard to believe it’s been five years since I first encountered its malevolent little robotic gits at the now-defunct Chi-Con on a cold December morning. What’s more frustrating is that Tom (their creator) still looks as fresh-faced and youthful as he did that day while I now resemble board game equivalent of Keith Richards.

Both the bots and Tom their circus master has become a familiar sight at conventions and whenever we catch up its always great to see how enthusiastic he is about his mayhem producing little creations, at this point their both as comforting as warm slippers and a nice cup of tea.

So for the uninitiated Stak Bots is a tiny little filler of you battling opponents with your deck of Bots, you’re simply looking to demolish your opponents Stak by sending all of their Bots to the scrap pile. Each subsequent expansion aside from adding more interesting and devious new Bots to your roster has always expanded the ways in which you can play and at this point with this latest expansion, it presents us with a brain-boggling variety of options.

All the previous expansions have added mucho-mayhem but this Purple Expansion now allows us to start messing with the Staks themselves this really shakes up the game and its like a re-boot considering just how much variety this little deck brings to the game.

The upgrade mode is like chaos maths happening before your very eyes as you buy your deck from a set of six pools of cards, with the cards activating as they are purchased, its nuts! And is like a micro-game within a micro-game as carnage and mayhem occur with each new card draw. I very nearly had a seizure on my first attempt.

Then there is the Split Drafting mode with you and your opponent each knowing half of each deck so the game descends into not so much blind man’s bluff more a short-sighted variant. It’s like Banger racing in blindfolds and the inevitable carnage of twisted metal is usually only a hand or two away.

As with any new Stak Bots deck, there are upgrades to existing Bots and of course, some fresh recruits and this one is no exception. Whether its the baseball wielding Leader Bot braining anything within reach with his baseball bat the aptly named Smug Bot or the bulldozing tank of Shunt Bot there’s a whole menagerie of new little metal nutters to spice up your games.
And what I love the best about this expansion is that now we’re messing with the Staks which is just very satisfying especially when I can finally wipe that smug grin off Son No.1’s face.

What else to say? Look Stak Bots is a survivor, and I expect has some Terminator juice somewhere deep in its mechanical DNA. Considering the obscene amount of games that are released every year the fact that this one still continues to stay on active rotation popping up at party’s, games nights or just when there are a spare 10minutes counts for a lot.

If you’ve never had the pleasure of a Stak Bots battle then what are you waiting for, this is an absolute steal at this price.
Christmas is coming peeps and this is a perfect stocking stuffer for that special gamer in your life. And as all the previous sets are available direct from Tom’s webstore treat yourself or a loved one (or two) while you wait for the Purple brigade to drop through your letterbox next year.