I’m knackered! After a harrowing six long days of seasonal retail work* it was with some small relief that I had a day off. And rather than spend it sensibly tucked up in bed recovering I decided to venture out into the crisp chill of this weekend and saunter along (11 year old in tow) to Chi-Con 2013 a mini con arranged by the Chichester Gaming Society.

I’ve not been down Chichester way for some years, in fact not since I was but a youngling. I remember blowing some birthday cash on a copy of West Ends Ghostbusters RPG and a copy of TSR’s godawful Indiana Jones adventure game in a hobby shop. Both of which I still own even if the aforementioned archaeologists gaming efforts have been relegated to a dark recess of my man cave, so it was a return of sorts to my gaming past. 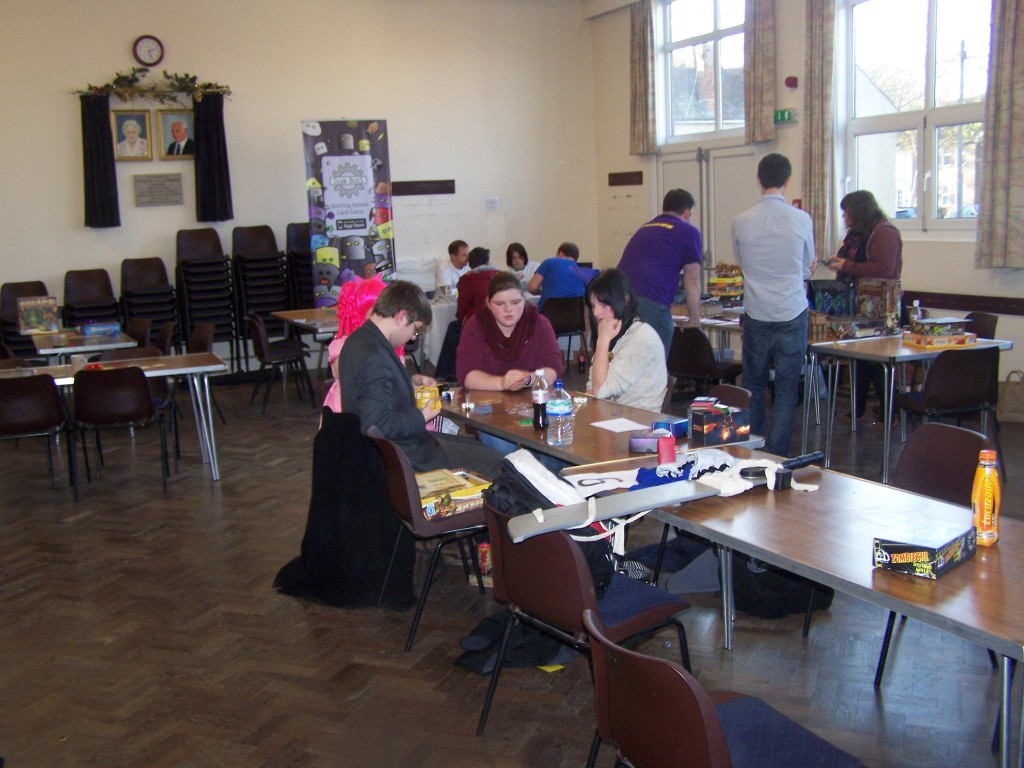 The Calm before the storm.

Myself and son No.1 arrived just after 10:00am at the hall and already there where the first shambling’s of gamer’s in attendance. Front and center and making quite the impact was the stand set up by Black Box Games and the tables set aside for their marvelous Lords of War card game. 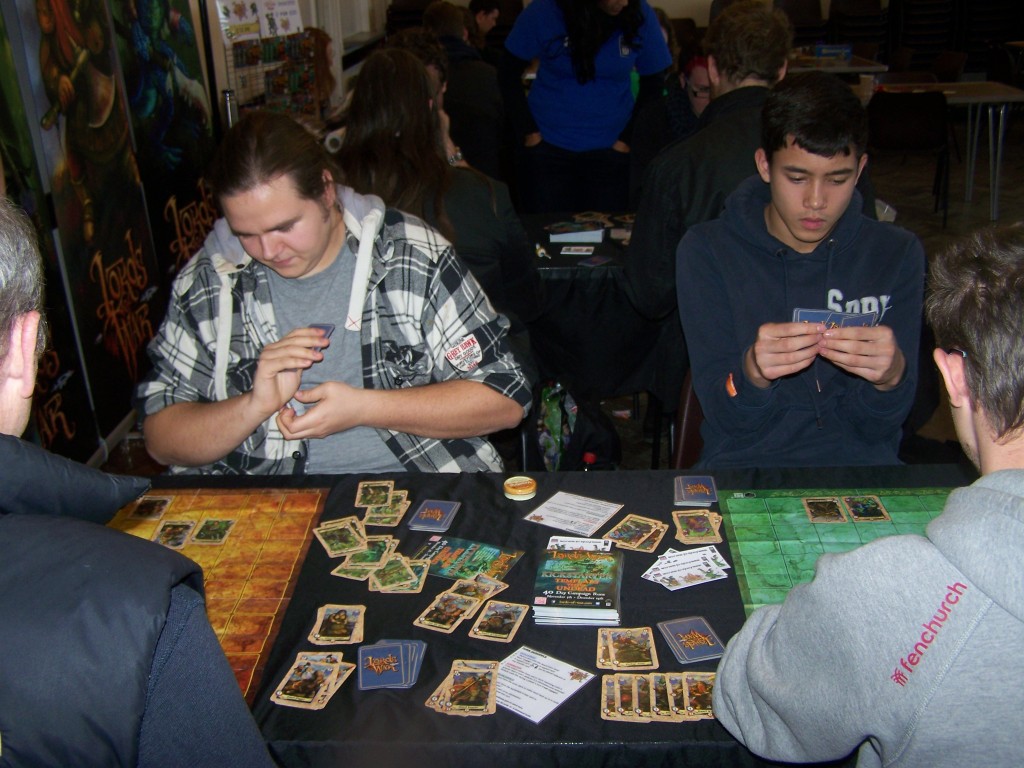 I’ve gone on before about this, but these guys should really be getting more love then they already have received. Lords of War is a fantastic little game (winner of a UK Games Expo award). A strategic card game of battling fantasy armies, the cards have some stunning art evoking those bygone days of the Fighting Fantasy books. They are inexpensive to grab at just over a tenner a pack. Easy to teach and can be played by anyone no matter what your gaming knowledge. It is with some shame that I must admit that I regularly find myself being defeated at the hands of my eldest, who also loves this series. 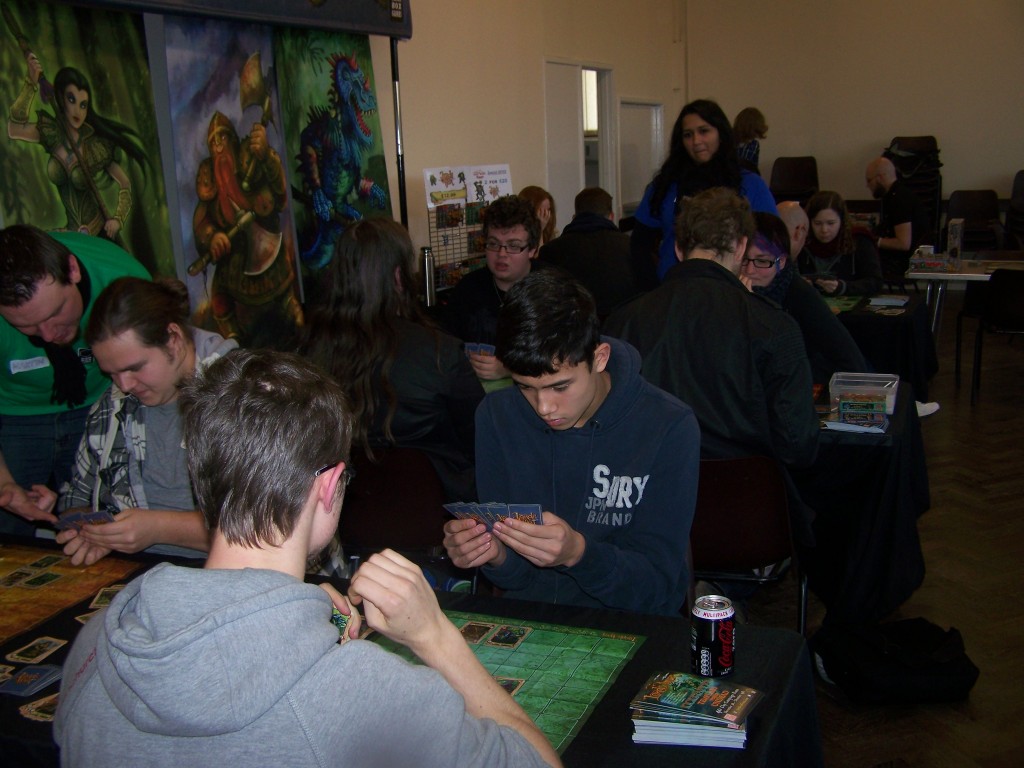 And if you want to scratch that itch you can, Black Box currently has a Kickstarter running for their most recent addition to the Lords Of War family Zombies V’s Templars they are so close to the goal and could do with any help you can give (well cash to be honest) so be proud, support a bloody good bit of British ingenuity, dig deep fellow geeks and help a Joe out.

A shout out to Martin from Black Box who was very welcoming and accommodating to my jumping on him and slavering him with fan boy glee, as ever he was the consummate host and by the afternoon the proof was there to see as their gaming tables spent the entire time jammed with players. Head over to the Lords Of War site and take a gander. And while visiting grab yourself a copy it would be rather rude if you didn’t.

There was a small but comprehensive library of games to play and we managed to fit in Carcassonne, Castle Panic and a quick Zombies play, all choices by Ollie, Castle Panic being his favorite from the bunch and its been added to his wish list. (I’m waiting for Dead Panic to hit these shores, the addition of zombies will seal the deal for him). 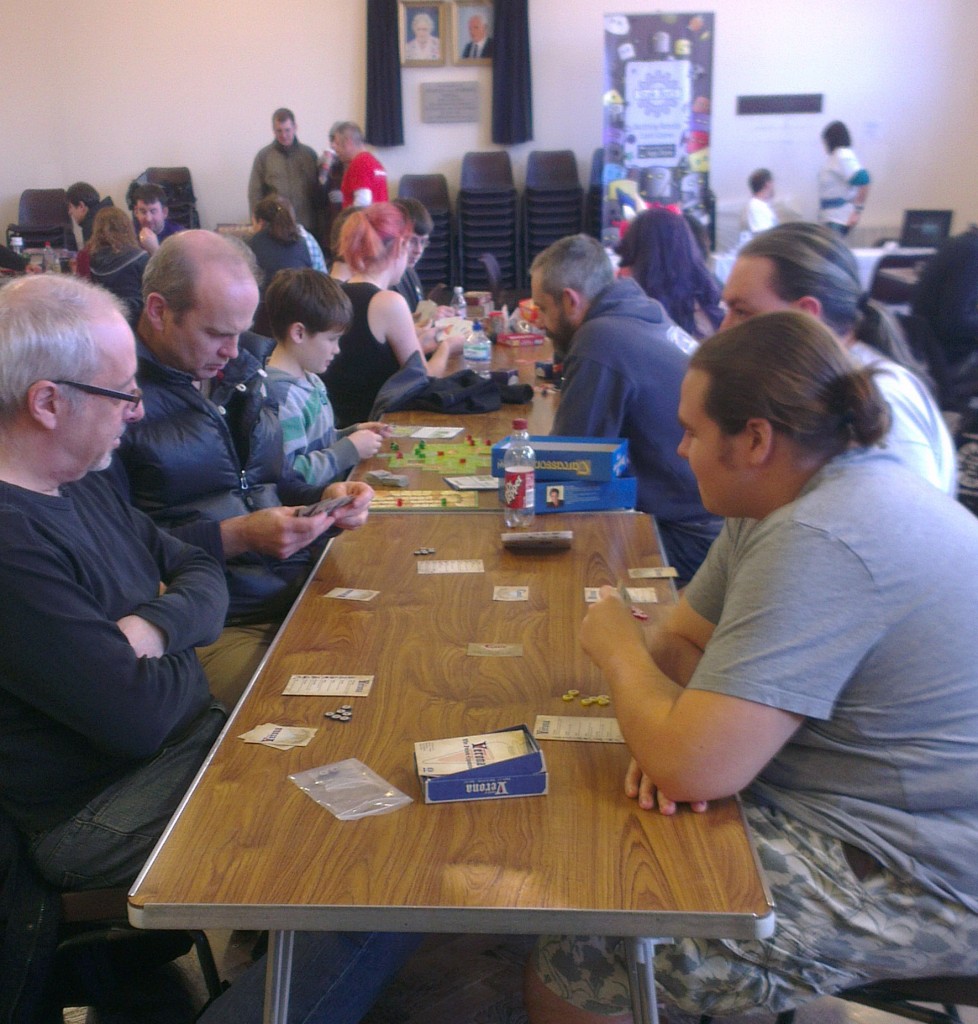 Me and the boy in the background. (pic courtesy of tcgsonline.com)

Around the hall Escape Curse Of The Temple was proving a popular, at one point it was being played on at least three tables. And at various points throughout the day a very enthusiastic game or two of Luchador:Mexican Wrestling Dice was seeing plenty of attention along with creator Mark Rivera who was heading the excitement. Somehow in all the excitement I never got a chance to stop and chat with Mark,  we did however literally nudge shoulders at the tables as we found ourselves being shoved about by an enthusiastic group at the far end.

Another home grown talent was attending Tom Norfolk was demoing and offering his neat little card game Stak Bots . I have to admit I wasn’t initially drawn to the game as the simplistic style of the art didn’t grab me (that’ll teach me for being a superficial git), encouraged by Ollie to look we sat down for a demo. Tom was brilliant he talked us through the rules in seconds and we were playing, Ollie instantly got what was going on and with some luck and a deck unfortunately for Tom, stacked in our favor we won. And like that I’m a convert, the game is wonderful, it has oodles of variations to increase the complexity and strategy and is a very versatile and rugged little game. I picked up a copy straight after and have since played it a few more times and this one is really growing on me. I’ll be putting up a review very soon (hectic work schedule permitting). 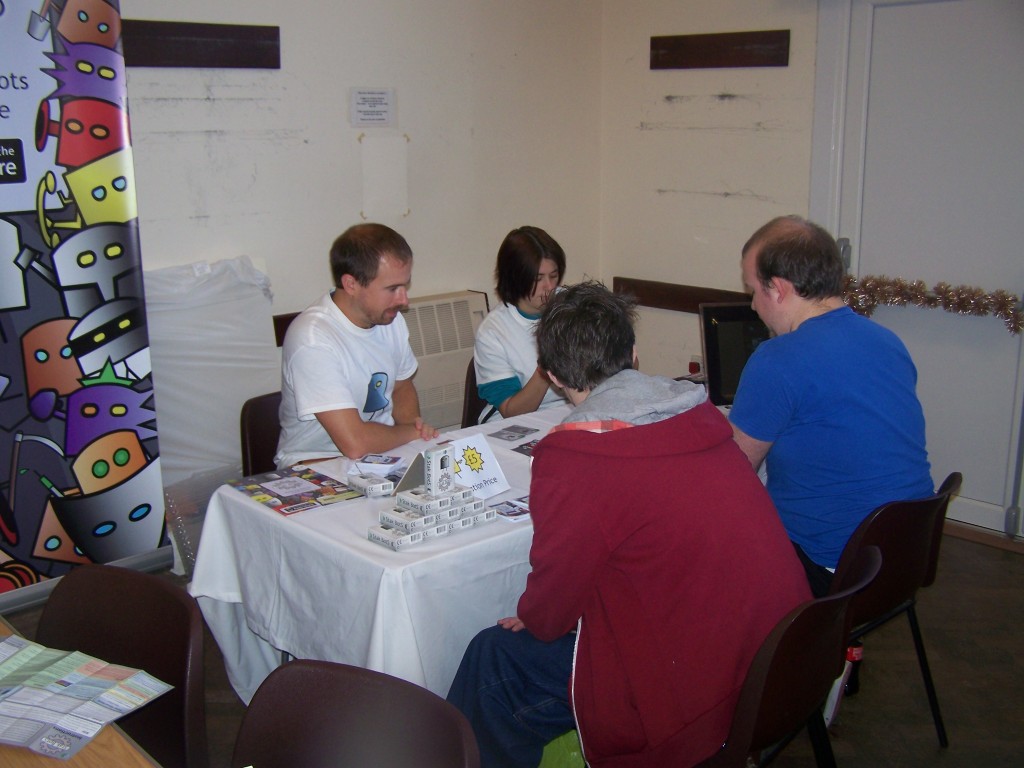 Go and check out Tom’s site and nab yourself a copy or better still sign up for the Kickstarter that is running now for an expansion deck of more of these fiendish little machines, personally I want more and once you play this I imagine you will too. And if that’s not enough to convince you, download the app for free and give it a go. But frankly for less then the price of a Pizza you can own this clever little game and whilst its probably not as tasty as a double pepperoni it won’t give you greasy fingers or heart burn, and it’s a lot more fun in a much smaller box.

After a brief tour of Chichester city center and a hasty burger we returned to the hall in time for the cos play competition with the prerequisite Steampunk, MLP and Pokemon showings, a raffle (which we didn’t win sob!) and lots more demo’s.

For a small venue they packed in plenty to see and do, I had as much fun here as I have had at far bigger and more prestigious events. I’ll certainly be coming back next year.

Thanks again to everyone at Chichester who made us very welcome.

* For those of you lucky enough not have had to endure this time of year from the unenviable position of one of the faceless masses helpfully arranged to assist in this joyful time of giving, you may be blissfully ignorant of quite what a fun time is had behind the scenes in any number of this fair lands retail outlets. Let me for a moment set the scene. Imagine performing revolving root marches across the Gobi desert with only your own sweat and stale urine as nourishment, whilst having an unruly ill tempered moron attached to your back who will make constant ridiculous demands of you while treating you with all the charm and welcoming good nature of a death camp guard. You may begin to get some idea of just what fun it can be to spend time in the company of the general public, especially when they really want something that you don’t know either what it is because they described it as that green thing that’s on TV, or if you even stock it, and then being treated like an illegitimate red headed stepchild when you can’t suddenly materialize said item. About as much fun as flossing with a tramps pubic hair. Sorry had a bit of rant, I feel much better now, now stop reading this drivel and get back to the article.