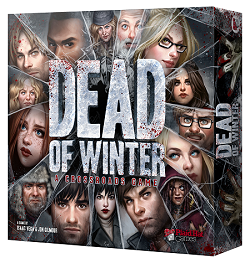 Wow, just wow. Plaid Hat games purveyors of some mighty fine board game entertainment that I ashamedly have not gotten around to reviewing yet, have just announced their new title.

Dead Of Winter – Its part of a planned series under the Crossroads series (no not the 1980’s hotel TV show) its zombie post apocalypse genre time folks. However what has really peaked my interest is that this does what I was recently lamenting is missing from most of these style of games in my City Of Horror review. It puts all the emphasis on the humans and how they are quite capable of stuffing up a perfectly good situation without any involvement from the undead hoards.

Dead of winter is set in a weakened colony struggling to keep it together at the end of times and deals with how this ragtag bunch cope with surviving, with each other and the world around them.

Dead of Winter is a meta-cooperativepsychological survival game. This means players are working together toward one common victory condition–but for each individual player to achieve victory, they must also complete their personal secret objective. This secret objective could relate to a psychological tick that’s fairly harmless to most others in the colony, a dangerous obsession that could put the main objective at risk, a desire for sabotage of the main mission, or worst of all: vengeance against the colony! Certain games could end with all players winning, some winning and some losing, or all players losing. Work toward the group’s goal but don’t get walked all over by a loudmouth who’s only looking out for their own interests!

How good does that sound, love co-op games and love games that include hidden agendas, this has all the makings of being a new classic in the genre. It looks to tick all the boxes I’ve been so desperately waiting for in a zombie game and also seems to tackle head on the Alpha Gamer issue that can occur in co-op’s.

Just loving the sound of this, its not available yet but they are promising a pre-order soon. I’d really like this to turn up in my stocking this Christmas so holding my breath for further news. Watch this space.

Board Game News In The Week.
Be the first to comment!
Leave a reply »