OK so what the crivens! its nearly August, when, who..?

Blighty strives valiantly onward despite being in the sweaty grip of a heatwave and the deliberating effects this has had to the national consciousness, robbed of the opportunity to moan about the weather means conversation on our fair isle has been rendered obsolete and muddles of the general public can be seen looking confused and smiling politely at each other and generally looking awkward went stuck in lifts with strangers. Which means its a perfect opportunity to crack out board games and get people drinking Pim’s and having the odd cucumber sandwich whilst interacting over something meeplely. (man i’m smooth).

So onto the news…

Well August beckons and it means news of actual real newsworthiness is sparse as board game distributors clench holding on to those nuggets of news preparing to pebble-dash the information superhighway in the coming weeks when Gen Con hits. Still never ones to shirk from a challenge we’ve done some digging.

And no.1 with a bullet is that Rob Daviau designer of Risk Legacy has been linked to a new game from IDW called V-Wars.

In the game, players will join the war as either a human or a vampire, working toward completing missions that will change the tide of war. However, they’ll have to be careful in who they trust, as exposure to the ice virus could cause players to change sides mid-game. In the world of V-Wars, alliances are temporary, but blood is forever!

I recently had the opportunity to sit down (not sure what the skype equivalent is of that) with Rob and discuss his Legacy games and what he’s been up to of late (didn’t mention this Rob??) we did touch on his love of story telling through games so it’ll be interesting what he gets to do in this sandpit. Look for the interview to hit soon in our birthday podcast, that is once I can get all the troops together to record it, its like that round up scene in Armageddon only with less Micheal Bay editing and more pullovers. 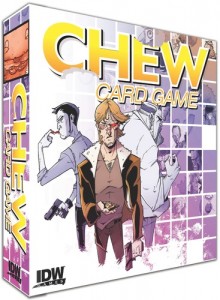 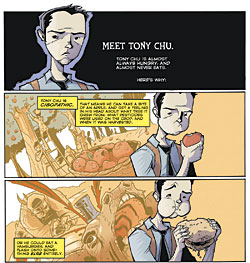 IDW have another licensed property that could be something to tantalize your taste buds Chew based on the comic book series about a  FDA agent who solves crimes by receiving psychic impressions from comestibles, including people. It’s a quirky and fun read with some cracking art from Rob Guillory, whom will be lending his talented hand to the games art. IDW plan to release a series of card and board games under the Chew banner and personally I can’t wait to see what delights will be on the menu. IDW gave us this aperitif.

The CHEW game line will feature a smorgasbord of play options from board to card to dice games, each title being a stand-alone experience designed to whet fans’ appetites, whether they be a gaming novice or a connoisseur. IDW Games will be tapping top game designing talent to develop each game in the series, and Layman and Guillory will stay involved on the creative side to ensure the look and feel of each game is in line with the highly stylized, quirky world they’ve created.

And changing tract entirely Tony Boydell he of the recent Ivor the engine game that we favorably reviewed last week. Has announced that his game of battling pensioners Bad Grandma’s will be seeing a spiffy new printing. If you fancy giving it a spin you can get the PNP version from Good Little Games. 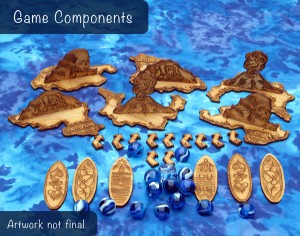 Here’s a quirky dexterity game that I bumbled over on Kickstarter Island Surf see’s you surfing marble waves on a tiny bamboo surf board with your fingers. Not really what I found so interesting about it, other than It’s a cool idea and concept and just looks fun. The only reason I’ve not dived at it is the rather steep international pledge amounts, if it had been cheaper I would have given this a shot.

And in this rather sparse week of news that rounds us out. I’m putting the finishing touches to the recent interviews I’ve conducted including the aforementioned Rob Daviau (who teases some interesting snippets about his new legacy projects) and the always up for a chat Nate from Board Game Hour. These and other content of epic board gamerly joy will be in the soon to be finished epic TI3 length birthday podcast.

Stay tuned for that and other exciting developments.

Who Dares News on February 10th

The Chronicles Series – A New Legacy For Board Games.

Who Dares Rolls Podcast Episode 10 – The Bumper Birthday Episode
Be the first to comment!
Leave a reply »