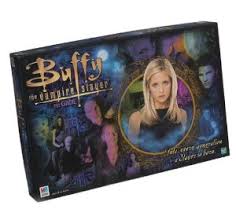 Great use of the license.
Lots of different ways to play.

Hard to find it's OOP.

If you're a Buffy fan than this huge fun, features some early co-op game design and even a hint of the legacy systems that Daviau would later build on. One of the first of the new breed of licensed games that actually gets in right. Just a shame this one is so hard to find.

Released at the height of Buffy’s fame the buffy the vampire slayer board game is a surprising little box of goodies, it came from Hasbro who are never known for exerting themselves with licensed property’s besides slapping a new set of images on a Monopoly board. This really shouldn’t have been all that good and I was expecting it to be pretty dire, but my better half was and still is a huge Buffy fan and I like board games, so it seemed like a slam dunk.

A quick word of warning! there are two Buffy games, stay away from anything that looks like this.

This is terrible and exactly what you would expect of a game license from around 10 years ago, its shocking. Ebay buyer be warned. 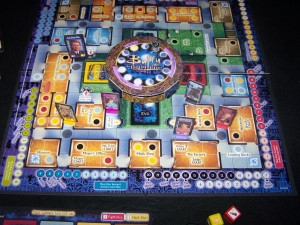 This is a really cool and neat game that captures the essence of the show and is a whole lot of fun to play. It plays just as well with 2 players but is great with 5. One player gets to be the big bad and the others the scooby gang, and here’s one of the first cool bits, this is actually 4 games in one, included in the box are each of the villains from the first 4 seasons of the show. Choosing one changes the goals and some of the other game play elements, its a neat feature. One of the games designers was Rob Daviau who would later go on to add lots of cool game modifying features in the brilliant Risk Legacy and his fingerprints are all over this, this episode systems i’m sure being one. 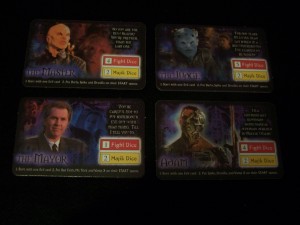 The bad guys go first moving around the board and gathering cards which will give some nifty skills and sacred artifacts that do all kinds of kooky things. Depending on the Bad that’s been chosen will alter what the objective is for the players and whilst its not huge game play changes they do add a nice thematic feel to proceedings, and will usually revolve around the players having to track down specific items so as to dispatch this episodes villain. 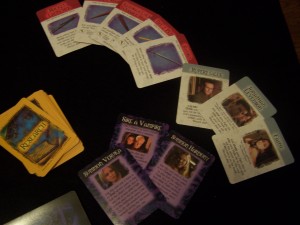 To make things worse for the good guys all the evil players cards are kept hidden from them whilst all of their cards are kept visible. You play by moving about the board by rolling dice and then fighting by rolling another set (this is one of my only issues with the game, we could have had some really neat set’s of custom dice but unfortunately we get stickers on plastic cubes not a game breaker but it would have been nice to have had some neat Buffy dice) you collect cards and race to get to the artifacts before the villains. 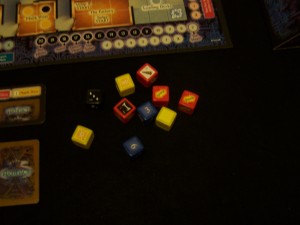 There’s a bunch of neat touches throughout the game, again these tie into the theme really nicely. There are homes that uninvited vampires can’t enter (unless they have evil card that will let them, that’s led to a few nasty surprises) in the center of the board there is a circle representing the cycle of the moon and sun, some of the movement dice will cause this to cycle which will effect some of the characters that are playing. 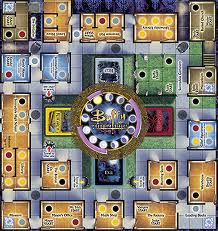 When it gets to the full moon some characters will transform into werewolf’s, if you’ve seen the show you’ll know about Oz (played by Seth Green) when he transforms he bin’s all the cards he’s carrying and charges around the board chomping on vamps. When its sunup all the vamps scuttle for cover like cockroaches when the kitchen light is turned on and getting cooked if they can’t move fast enough. The bad guy can even sire vampires transforming a good character into a bad and if its one of the more powerful characters that can really put a crimp in your day.

Returning to this game I’d forgotten just how much fun it was and how closely linked it was to the shows theme, it was defiantly ahead of its time featuring a great deal of ideas and rules that are now commonplace in a lot of the modern games. (Arkham horror and the Battlestar games come quickly to mind)

its a real shame that Hasbro never released any updates to the game, due to the modular nature of the bad guys and cards etc season packs could have easily been released, adding new characters and villains and switching up rules. If it came out today via someone like FFG that would be exactly what we’d get (come on fantasy flight – show some Buffy reprint love?)

All is not lost because over at BGG there are season scenarios and downloads for the later season’s, I’ve not played them yet but now having cracked the game back out of the vault I’m going to give them a look.

You can still search out a set of this, it does occasionally appear on ebay and you can always scour car boots and charity shops you never know what you might unearth.