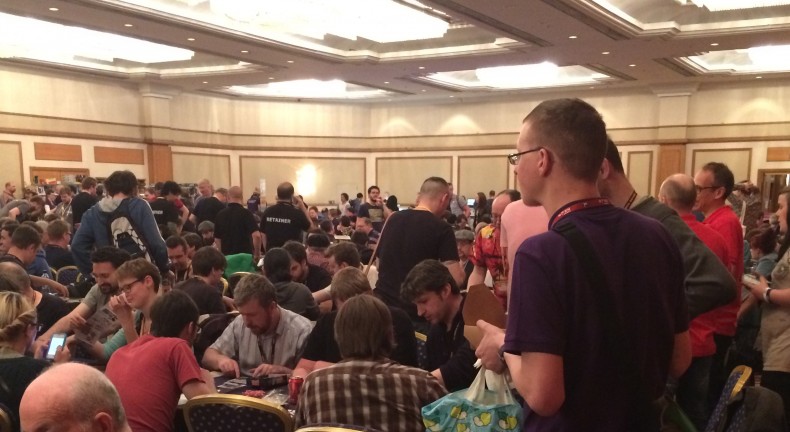 And so as I recline in the Who Dares Rolls study having washed the stink of freshly pressed cardboard and cellophane wrap from my nostrils its time for some quiet contemplation. 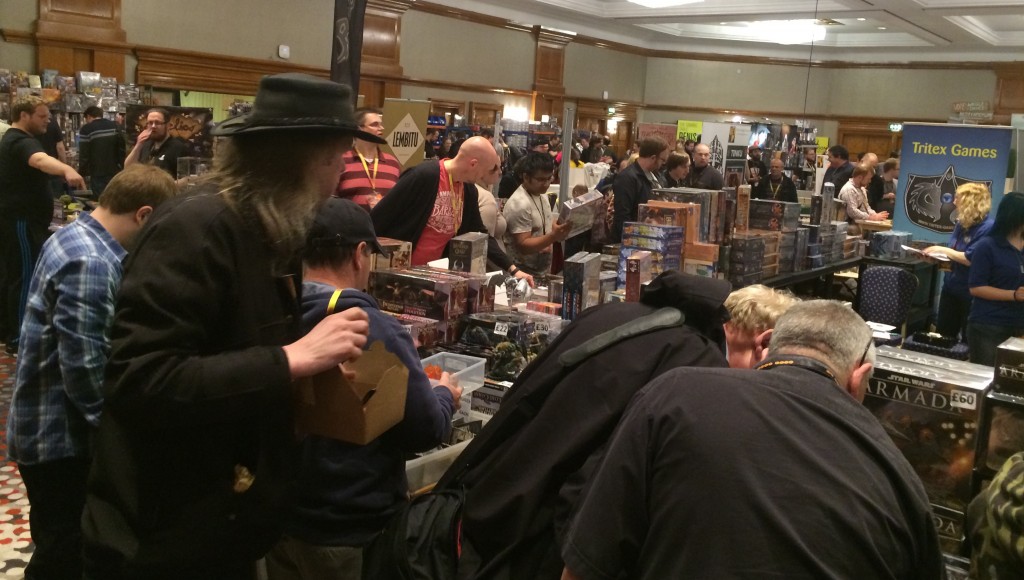 The UK Games EXPO has always been a mecca drawing in apostles to this fine hobby of ours from all the corners of this little planet we inhabit, its numbers have grown year on year like a viral strain of tabletop, and I think its safe to say that this year it reached epidemic proportions. The subsequent outbreak has infected thousands who have now returned home in some ‘Invasion of the Hobby Snatchers’ style daze to spread this particularly wholesome pastime of ours to loved ones and friends.

I love the EXPO its my special treat, a place I can go and where everybody really does know your name, a chance to catch up with old friends and meet new, where we dance this insanely intense three day tango of just playing together, talking and having fun, if you could bottle the experience… well world peace would be one we could scratch off civilizations bucket list.

To try and distill down into a few paragraphs what I managed to see, experience and enjoy is somewhat of a task, and what saddens me more is all the games, people and stalls that I never managed to get too. I love my massively extended gaming family and feel bad when I don’t get to give them a hug.

So anyway lets get too it, lets dig into the gristle, unearth the decaying remnants and exhume… that got a bit dark. OK so my (in fear of legal action from The Dice Tower – Assorted UK Games EXPO moments and experiences.) 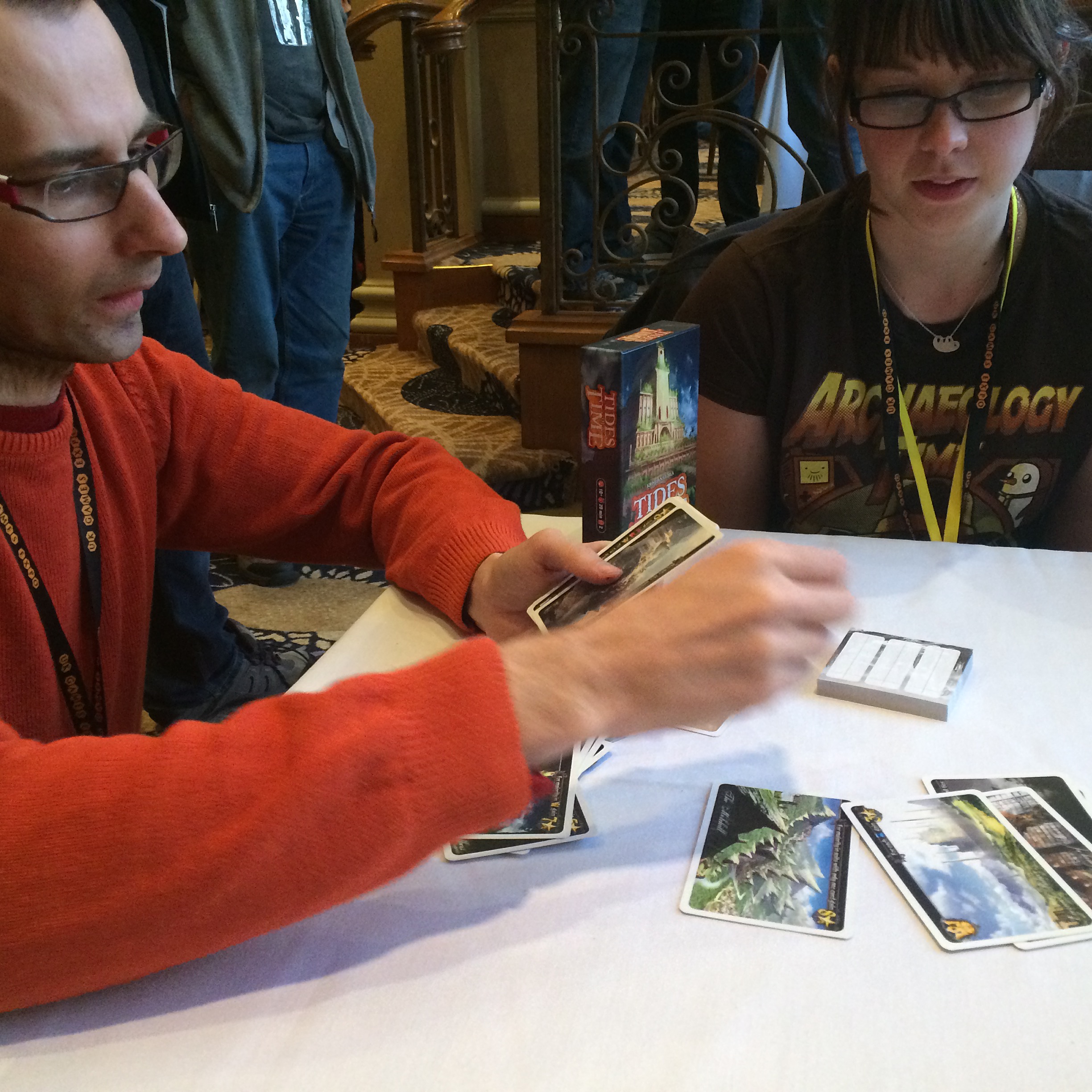 Meeting Ignacy, yes everybody’s favorite biscuit obsessed cuddly Polish games designer made his first appearance at the EXPO, he must have the constitution of an OX, this man does not stop! And besides a lovely stall of Portal goodness he snuck in some special treats. 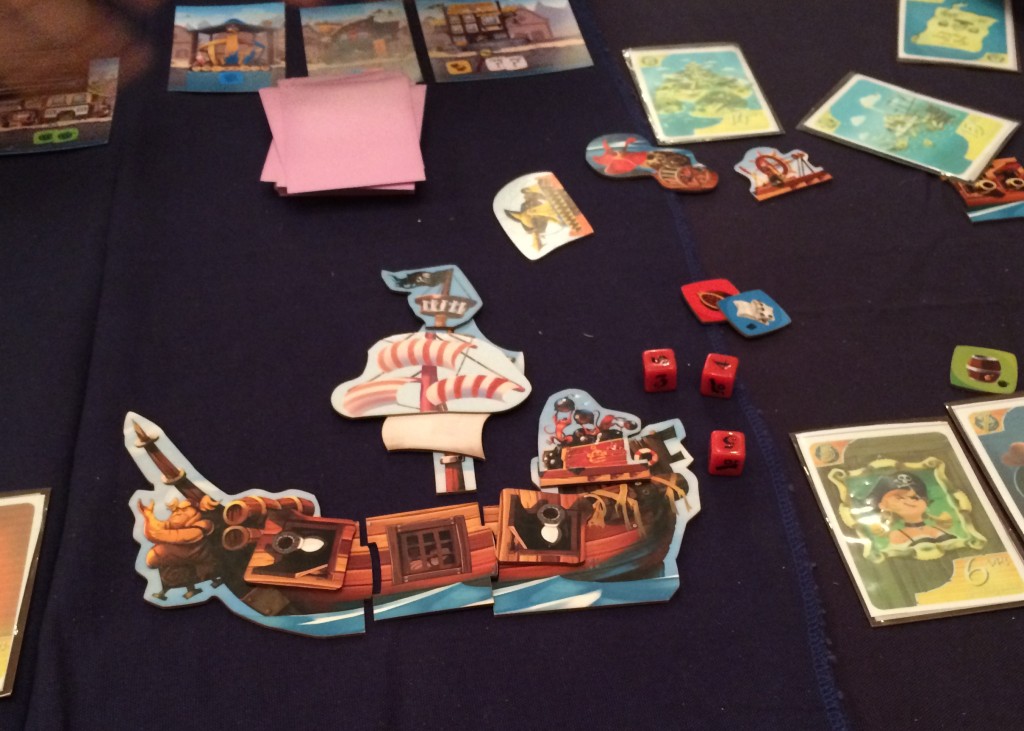 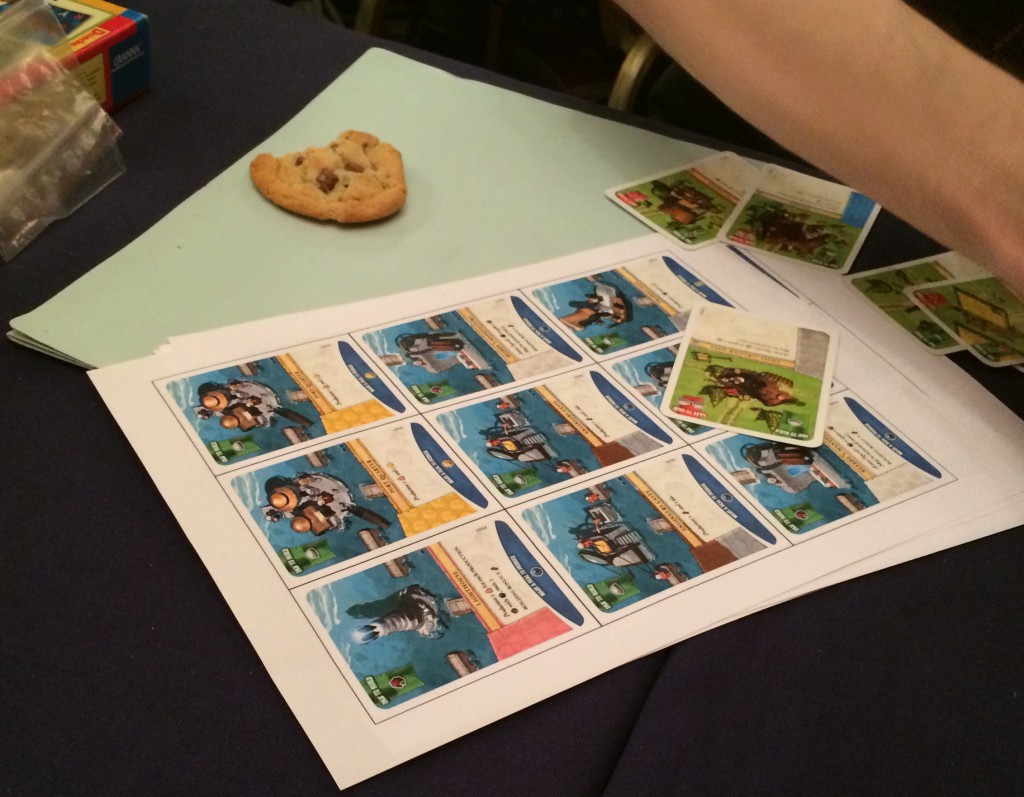 Imperial Settlers – Atlanteans – OK… Oh my god! This new factions is absolutely bloody mental, its going to totally mess with how you play the base game and is somehow a whole bunch of crazy that I don’t think any has seen coming. I’ll not say much but these soggy chaps are going to shake up how we play this game. 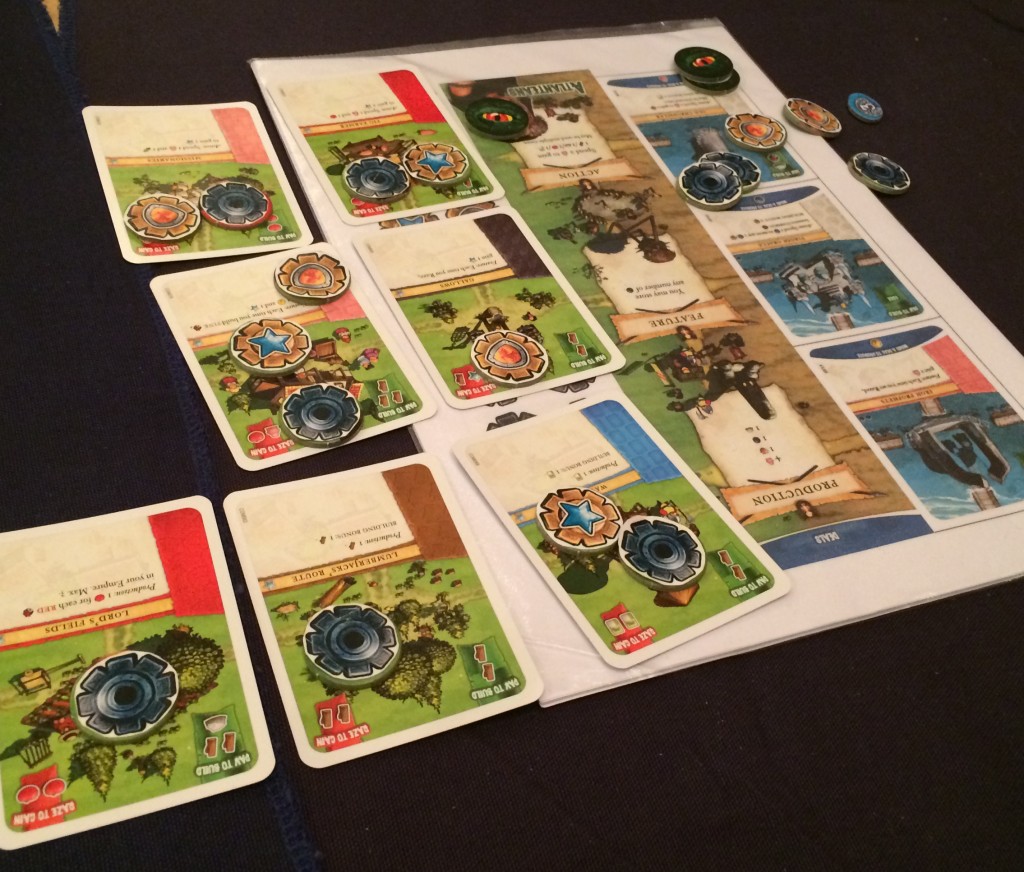 Just to give you a flavor, see all those little cardboard chits, well as you may know the Atlantean people don’t score VP for faction buildings at the end of the game, to combat that the tech they have allows them to apply sweet bonuses to common buildings. So you’ll going to have to look at every card with a fresh set of eye’s, mad genius. 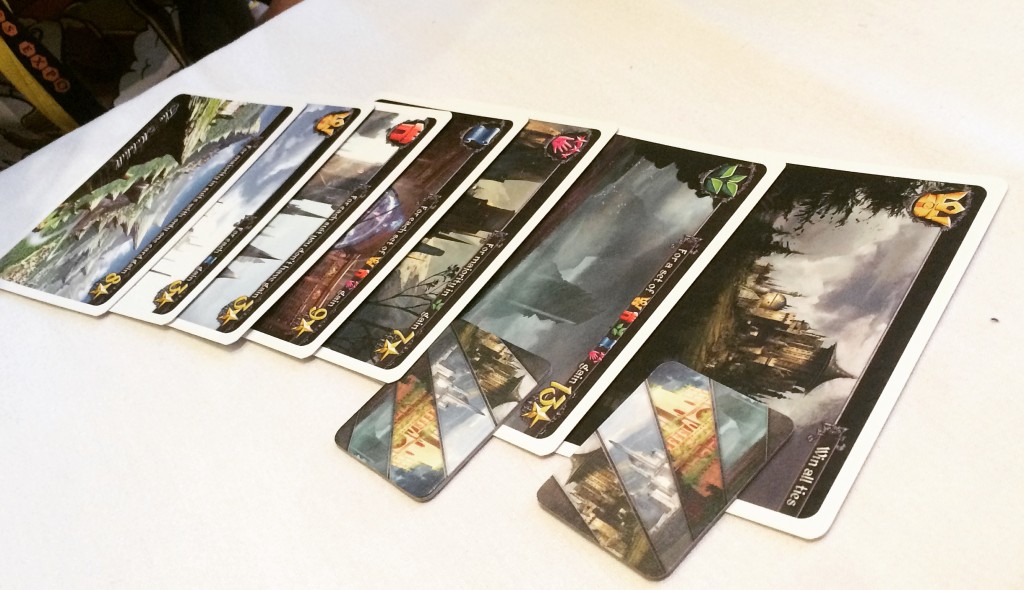 I also had the opportunity to play Tides Of Time another imminent release its a 2 player drafting micro game, it features some beautiful artwork and a simple but deeply satisfying game.

And then there’s this.

Forbidden Stars is FFG’s big release of the year so far and its a monster. With its 40K theme and fistfulls of very cool mini’s and heap of gorgeous components that we’ve come to expect from them, this is going to be a juggernaut spewing chaotic fumes and destroying everything else in its wake. I was incredibly fortunate to be given a walk through of the game by Anton Torres from FFG and was able to play a complete round. What to say, it has a deeply satisfying strategic scratch to that Twilight Imperium itch that I have, it features a huge amount of smart little strategic tweaks that i cannot wait to get the chance to try out. And looks to offer a hugely rewarding chunk of game for players looking for that intergalactic war experience. Its not a short game with 4 player games running into the 3-4 hour area, but with a design that promotes the need for constant movement and war in such a compressed area this has instantly hit my pre-order list. 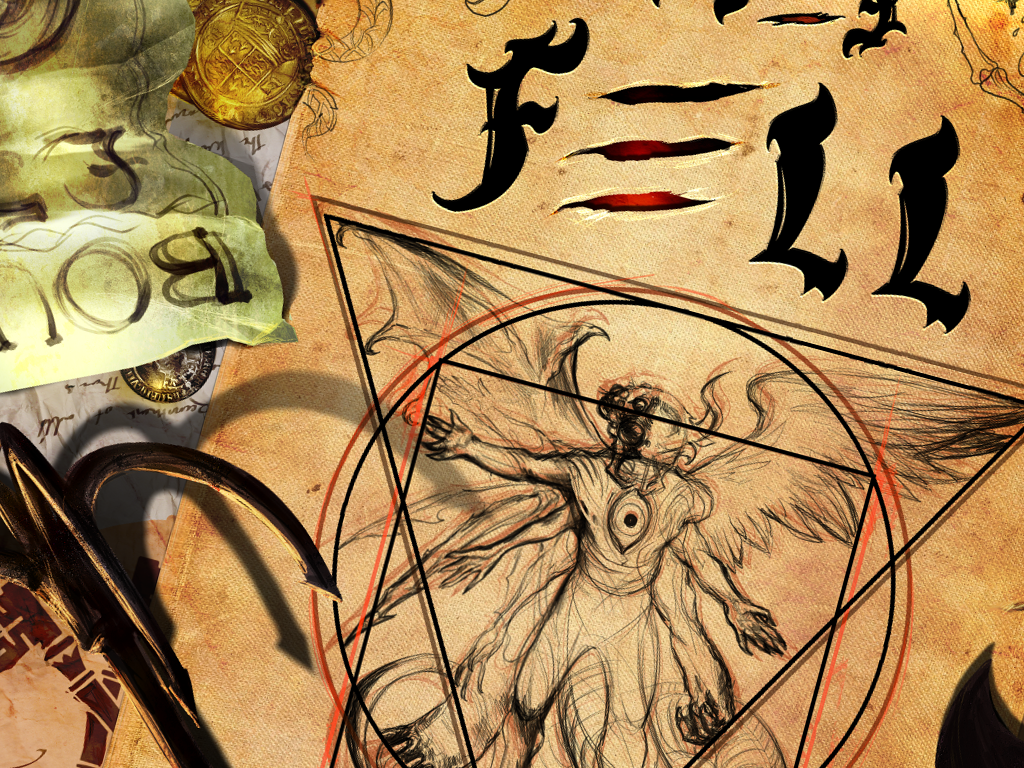 Fell – This one grabbed my attention the moment I saw it at the press morning on Friday, I spoke to Jack Ceaser one of the sickeningly youthful designers about the game and the moment he mentioned it as being a tabletop take on Shadow of the Colossus I was there. Its a game that see’s you assembling a band of mercenary’s and other heroic adventurous types to take on the massive beasts that are plaguing the land. In a very cool move the titan’s are assembled by a random selection of components that mean you’ll never going to face the same monstrosity twice, these differing limbs and bodies also mean each of these magnificent gigantic bastards will each come with fresh new ways to murder you. With both the option of tactically fighting in the stomp-able path of the creatures or foolishly climbing up their bodies to try and deliver a fatal wound to a soft bit this landed squarely in my geeky wheelhouse. 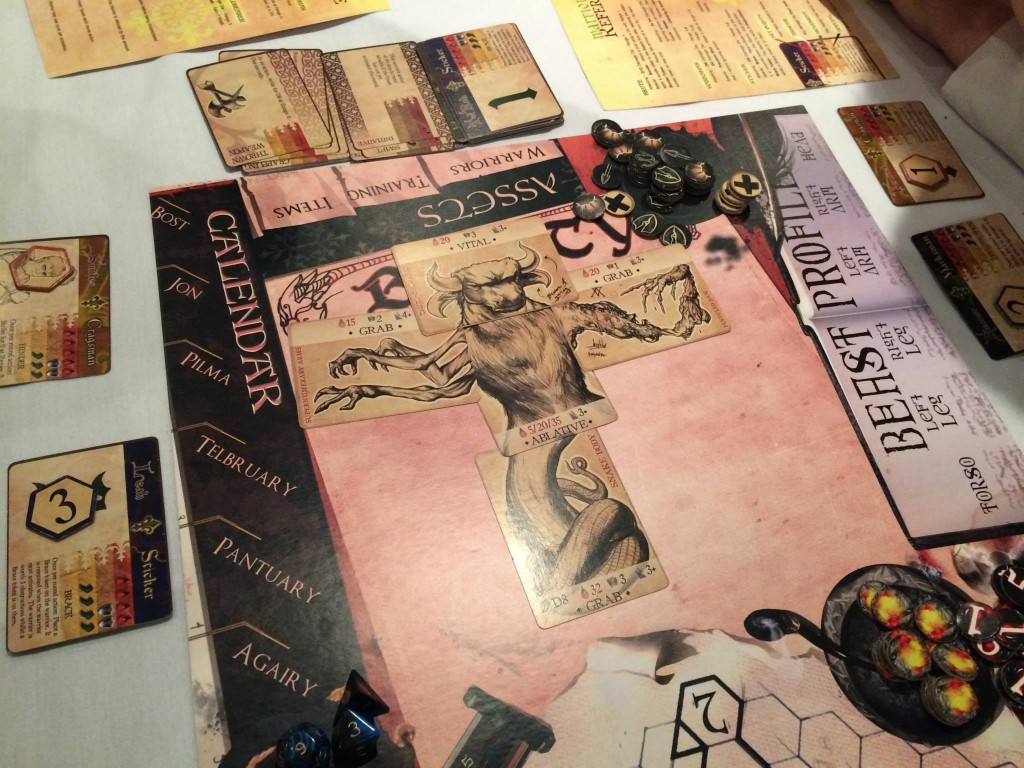 Fell is on Kickstarter right now and I strongly urge you to go and take a look. 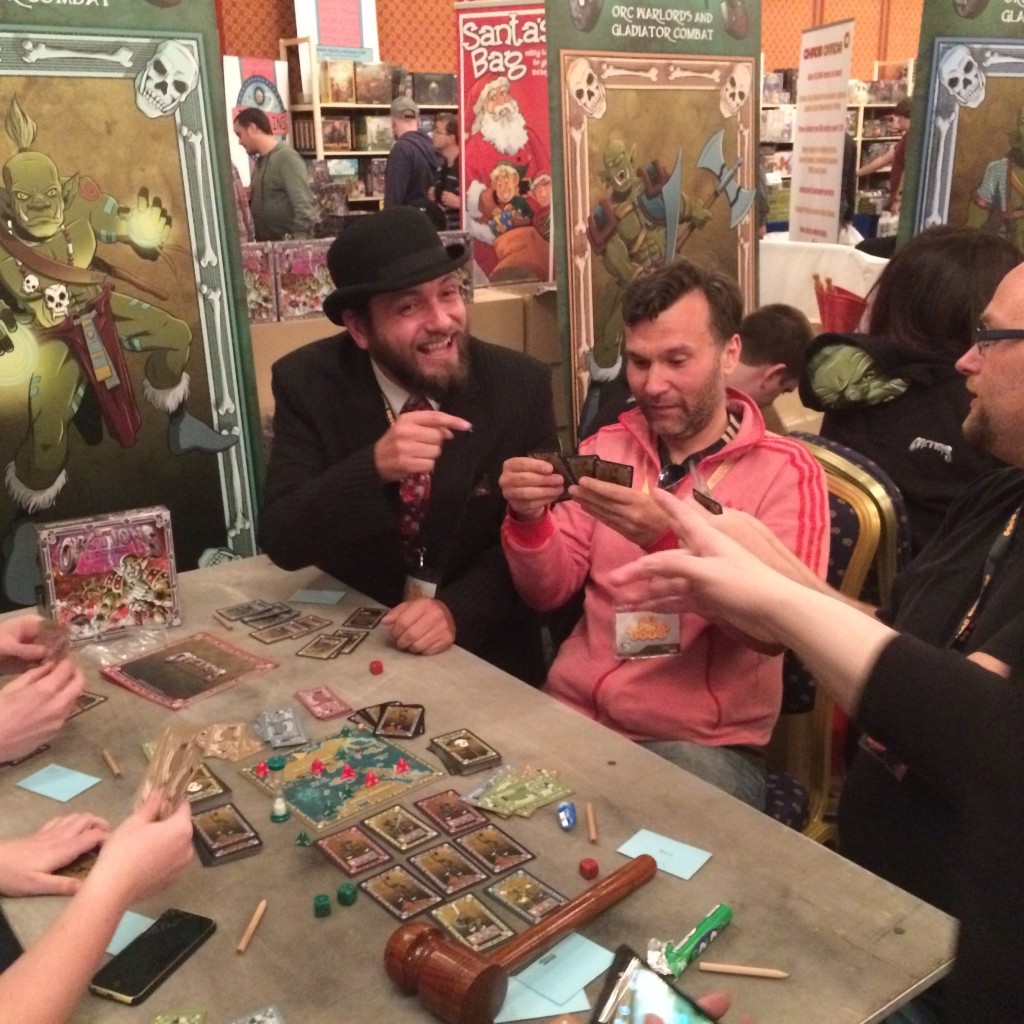 Orctions was a first, a stand that actually rivaled Luchador with its constant cheers and raucous behavior. Ben and Nate from the esteemed Board Game Hour played a game and was one of the most enjoyable moments from the EXPO, especially watching Ben when he overbid on an orction and was told to leave the hall in shame. Wish these guys all the best with this launch they were hugely accommodating and never lacked for enthusiasm. Why not click the link above and nab yourself a copy they were going fast. 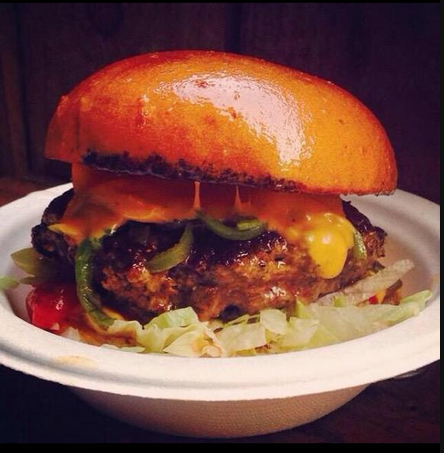 It could be argued that the one area the Expo has always fallen down was its food, the Hilton menu’s whilst lovely are not exactly soft on the gamers pocket, and the previous year I survived mostly off the local Subway. But this year oh my, we had a whole outside food court and it was bloody incredible. I lived off of these.

There was Mexican, Pizza’s  and also a ymmy BBQ stand that served some pretty tasty Ribs with all the fixings you could want.

More of this please.

I came away with a sensible haul this year but if I had to point you to the one gaming purchase that I love and has already seen significant play then its 6.

Its simplicity itself a tin with 15 dice in it and 6 simple but deviously clever little games from three fantastic UK designers Andy Hopwood, Greg Carslaw & John-Paul Treen. I love its efficient design, how the games utilize all the components available to them and that it fits in my pocket and I can take it anywhere with me. And should I ever grow tired of it I will always have somewhere to keep my mints. But in all seriousness its brilliant and everyone should own one, and the challenge is down because if you can come up with any further games using these few bits then let them know on the website HERE.

And that’s really just touching on the tip of this hugely satisfying iceberg of gaming fun. For instance did I mention the new Vlaada game? um no, but I should have because its brilliant, the follow up to Last Will Castaway Club natch (really good), The new edition of Through the Ages (yum) Guilds of London from Tony Boydell (joy). Look your just going to have to keep an eye out because Chris at the UKGMN recorded somewhere in the region of 160 interviews with designers and companies over the entire event and I’ll be sharing them as they become available. 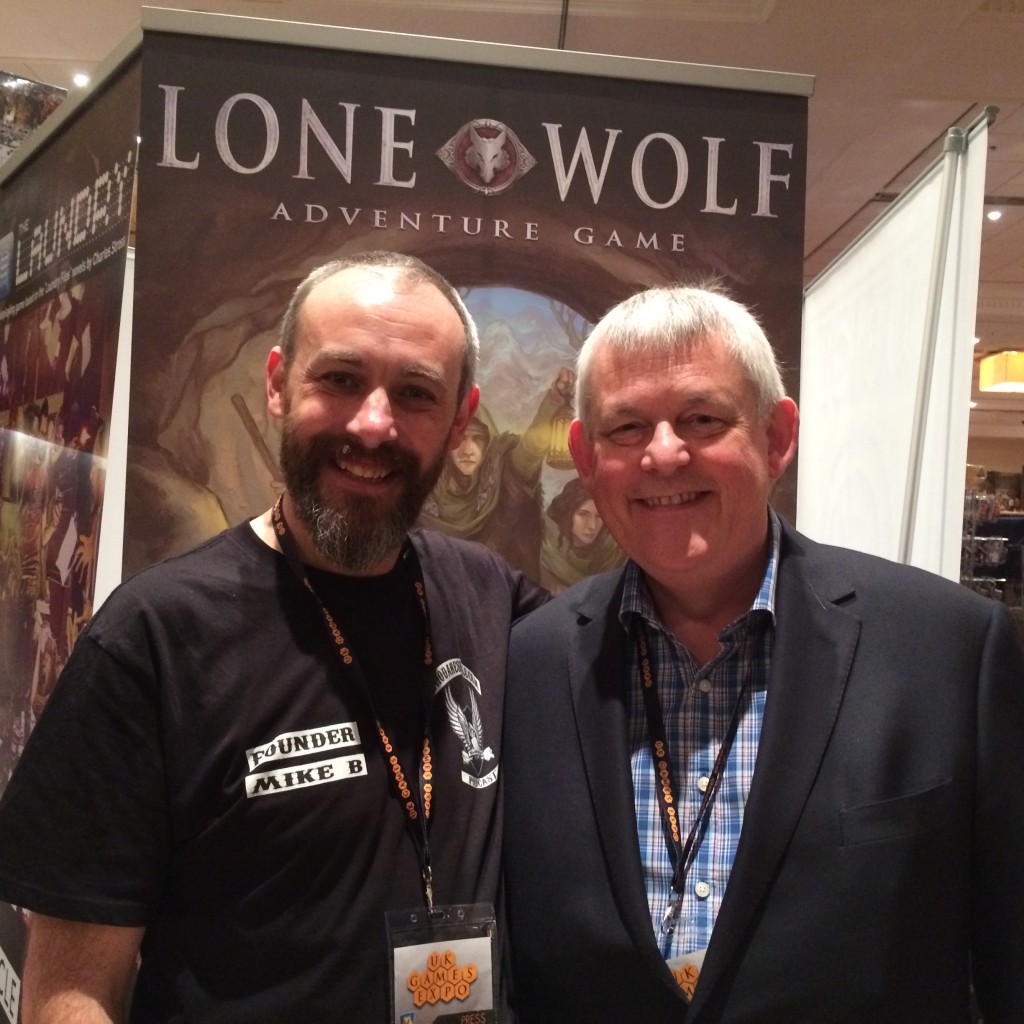 Oh yeah, met Joe Dever. He wrote the amazing Lone Wolf books that absorbed my youth and is a top gent. And if you never read the books then I strongly suggest you dig into the series either via the app, or the Aon web page. And later in the year we’re be getting the Adventure Game for a steal at £20. 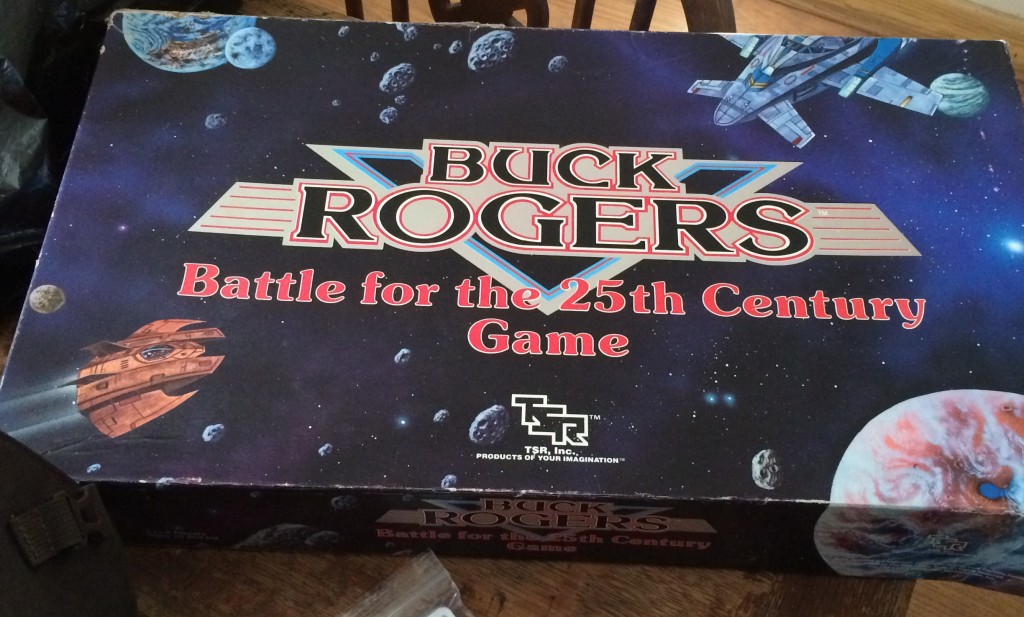 And found another bit of gaming history in the bring and buy.

But for now if you’ve never been then you really should start thinking about it, next year is set to be even bigger with the venue moving much of its operation over into the N.E.C. our little hobby ain’t so little anymore and i’m grateful that its the worst kept secret around.

And now I think I’ll have a sleep.