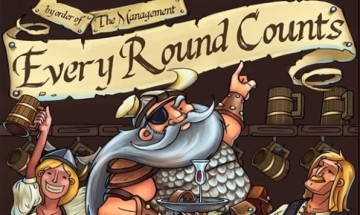 Well that was another week then, where the heck did that go? Well I suppose we had better get on to some news worthy nuggets.

First up, the Spiel Des Jahres did their thing yesterday morning, I attempted to work out what was going on from the live stream but they were all talking proper German, not the hollywood version that I can understand. So the big winner was Camel Up designed by Steffen 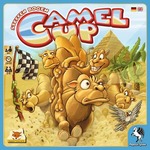 Bogen.That came as bit of surprise to me as I thought Splendor had this one in the bag, Camel Up see’s you betting on Camels in a race and features a 3d pyramid where dice tumble out off. Not played it myself yet but I

Istanbul won the Kennerspiel (the more grown up gamer equivalent) this one see’s you as a market trading, I assume where you have to haggle with tourists over the price of your counterfeit watches and novelty lighters. Yea not played this one either.

So there you go some proper news, late but proper. No pleasing some people… 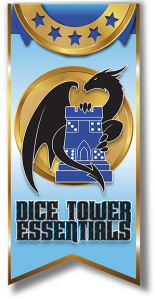 Dice Tower Essentials now has a website up. Tom Vasel that genial gent from the Dice Tower network has paired up with Arcane Wonders publishers of Mage Wars to bring us his essentials line. Blurb incoming in 3,2,1..

Many gamers around the world are familiar with Tom Vasel of the Dice Tower .  He’s a reviewer unlike any other and is easily voted the guy most likely to say “Yup” when asked, “Have you played this game?” no matter the game!  Tom has spent years playing, reviewing, and enjoying hundreds and thousands of games in our great industry, so it comes as no surprise that he is the crux behind the Dice Tower Essentials line of games.

The Dice Tower Essentials are games that Tom believes are just that, “Essential” to any gamer’s library.  They are going to be games from all genres, all areas, and all styles, but all are games Tom has thoroughly enjoyed playing, and like us, is looking forward to sharing with you, our great fans! 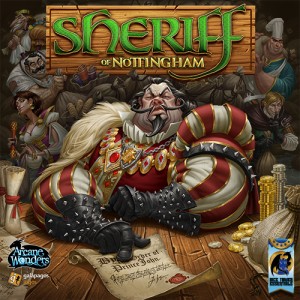 First up they are putting out Sheriff Of Nottingham which is a bluffing and bribing game similar in feel to Coup with a dash of hidden roles. Its had a fresh lick of paint with some great illustrations and I belive due to be released at Gen Con. Personally I think this is a great idea, Dice Tower has a pretty sturdy reputation in the industry and if they can shine some light on forgotten gems and get them back in gamer’s hands then cool. What do you the unknown masses think? Tweet us. 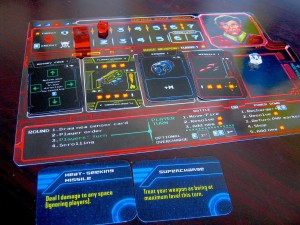 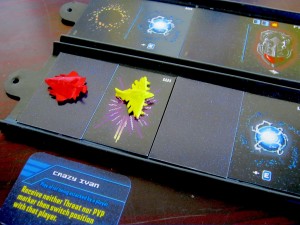 Now here’s something that we’ve been keeping a beady eye on. The Battle at Kembles Cascade from Z-Man Games. This is trying to capture the golden days of scrolling shooters but on our tables. It does look to be really cool, with players zipping all over a board that is constantly shifting until they reach the huge boss at the end of each level. Word of mouth has been pretty good on this. I have seen some previews and my only issue from what I saw was it appeared incredibly fiddly, but that was an early demo copy. Hopefully with Z-Man’s involvement they have ironed out some of the kinks, if it gets this right its an instabuy for me. Look for it to hit at Gen Con and full availability in the 3rd quarter, being a Z-Man game best get your pre-order in early before it sells out and we have to wait 6 months for the reprint. I’m looking at you Robinson Crusoe, Terra Mystica etc.

Donald X Vaccarino – the man responsible for the deck building Juggernaught Dominion and then some other stuff that nobody really liked has a new game on the cards (haHa!..sorry) Temporum is a hand management card game with a time travel slant where players are trying to change the past to improve their future. Time Travel games I think may be set to be the new hotness over the coming months and hopefully old Don can capture some of that Dominion mojo he has lost of late.

And if you are in the market for time travel games then you can do a whole lot worse then checking out this little gem form Game Crafter Time Barons its a really neat and clever little 2 player card game from John Perry and Dereck Yu that see’s you battling your opponent using technology from different time periods. Its features some simple but neat design and art and is really really really good. Unfortunately the postage on this is a killer at the moment but you can always nab the print and play for free. I strongly suggest you try this out and I think it might just be a bit of monster hit, expect a publisher to jump on this soon. And I will get a full review up in the coming week.

New releases this week are relatively light on the ground but I do have one recommendation for you and that is Skull formally Skull & Roses. Its a simple bluffing game but is a cracking little filler and has been hard to track down of late awaiting for this reprint, so move fast before its gone again.

And I think that’s that.

And now its time for a cavalcade of Kickstarter Goodness.

In our most recent podcast I lamented that my Kickstarting successes have been frankly dire with many games i’ve backed from new or upcoming designers just frankly being terrible things with no actual games in their shiny boxes. So whether you should take any advice from me is probably up for discussion. However here are a few things that I think are worth a punt.

Every Round Counts – Limited Edition – Stephen Head recently had a go at seeing his dice game of fantasy bar tending funded on Kickstarter, unfortunately it was buried among some of the bigger US competition and didn’t quite hit its goals. But you can’t keep a good man down and he’s back with a cool looking limited edition version at a very reasonable price.  I bumped into Stephen at the recent UK Games Expo and the stand was seeing lots of boozy customers partaking of his wares, so its a shame that it didn’t make its funding. They are quite a way along so pop in and take a pew and show some love.

And now how not to run a Kickstarter – Crystalis by Elphin Games is a battle TCG game, they want $50,000 from you and currently all they are willing to offer to tantalize you with parting with your money is this… 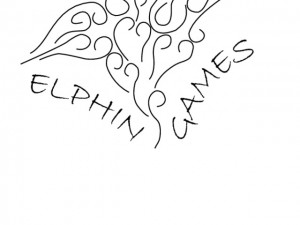 I kid you not. What a bunch of dick heads.

And with that thought still floating uninterrupted in our cerebal cortex I give you Warriors Crusade from Ruben Ortega. It includes such features as an easily inflated dice and a board that folds. Are you f’ing kidding me! Ruben get back on your meds! $40,000 they want $40,000. I have taken the liberty of distilling the video down to its pertinent points for you.

And on that bombshell I think we will call that a win.

Don’y forget you can reach us on Twitter, Facebook, BGG and until next time keeping playing and having fun!