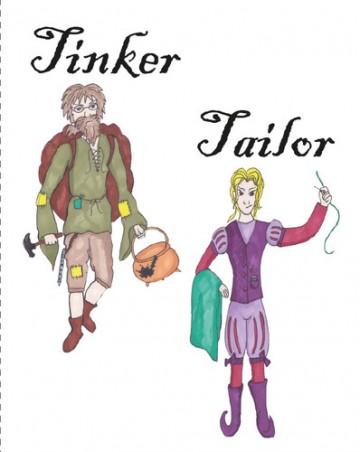 Easy to teach but with enough emergent tactics to appeal to a wide selection of players.
Has a satisfying mix of play styles and mechanics that work seamlessly together.

The art may put some off, but then you'd be a superficial buffoon and missing out on all the fun we're having.

A solid little game that packs a surprising amount of wallop into a deck of cards. Should appeal to both family's and hardened players and has enough depth of strategy to result in that one more go appeal. Whether you're looking for a meaty filler or just something to take along to the pub this manages to balance both well.

One thing we strive for here at WDR towers is to shine a light on the smaller publishers and games, those that can get lost in all the noise and bluster whenever one of the big boys release a shiny new toy. Recently we pointed you towards 6, released at the UK Games EXPO it easily contains as much fun and playfulness and most certainly more love splurged on it then a dozen other big box releases.

Well another title I was fortunate to encounter at the EXPO was Tinker Tailor from Medusa Games, they’re another independent publisher who’s been putting out some solid non fussy titles. Tinker Tailor is designed by Richard Denning who’s an incredibly busy man, when he’s not creating games for us hes organizing and running the UK Games EXPO every year so we can spend an uninterrupted weekend playing them.

Taking its lead from the traditional children’s counting rhyme Tinker Tailor is a relatively simple little card game featuring some familiar mechanisms but combines them in different ways to come at things from its own unique perspective.

It has a pinch of the Role Selection popular in a great many card games such as Citidels, offering 17 different roles you can inhabit each round each featuring a mechanic that thematically ties to whomever they portray. Add a dash of drafting and then tie the whole lot together with a generous length of set collection and you have the basic set up for the game. 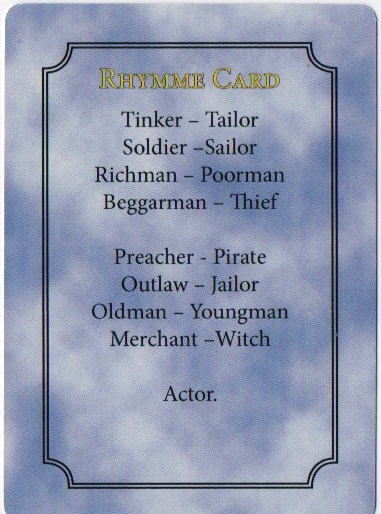 So How Do I Play This Thing?

Well the rules for the game are simple. To start two rows of cards are dealt out one from a money deck featuring differing denominations and then a row of goods from a mix of produce such as bread, fish, cloth, wine and gems. Henceforth this area is The Market. 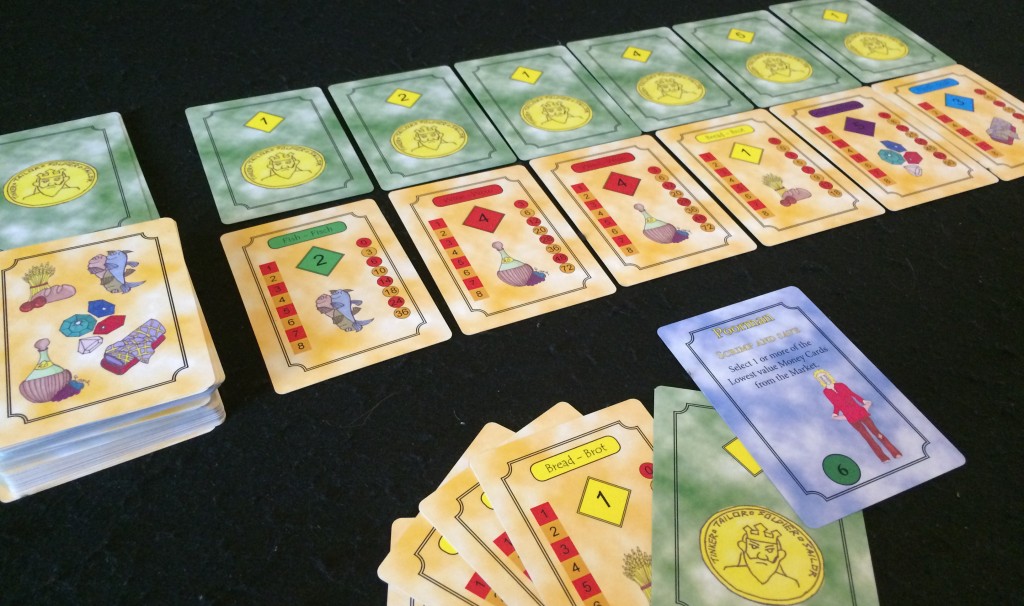 The start player then takes that deck of role cards and deals himself one for each player plus two more for some spice, takes a look at those cards, drafts one and passes the remainder onto the next player who repeats the process until everyone has selected. Then the start player slowly reads out the Rhyme from the supplied card and when a players character is called they reveal their card and perform that characters actions. As an example The Tinker will allow that player to select 1 or more of the lowest value goods cards in the market and add them to their deck.

After performing a role action you then have the option of purchasing goods from the market with whatever money you have. Play continues like this with players slowly amassing a deck of hidden goods and money cards.

Once this has gone once around the table then the start player moves on and the process repeats for a number of rounds dependent on how many players are in the game.

Once all the rounds are over then each player totals up all the goods that they have amassed, and this is where that set collecting comes in:

For example if you hold only two bread cards then they’re worth nothing, but if you’ve amassed a Warburtons sized baked goods empire say of 8 cards then they are worth 18 points. Now that’s all very nice but for the Gluten intolerant among you you could be collecting wine, just 4 wine cards are worth 20 points. However that cunning jeweler at the end of the table has amassed 6 gem cards amounting to a princely sum of 45 points. If it comes down to the line and nitty gritty tie breaker type shenanigans then a complete set of at least 1 of each of the 5 goods will garner you an additional 10 points. And if you’re still fighting over the points then any cash remaining is worth half its value.

OK So Anything Else?

Well yes actually, the fun bit, the part where stuff gets all a bit cut throat and maybe even nasty is in those roles.

The Tinker, Tailor, Soldier and Sailor all allow you a basic action to take some denomination of cards from the market, its as we move along through the roles that things start to get interesting and different synergies and tactics start to emerge.

The Richman for example can take the highest money card in the market. Whereas the destitute Poorman gets the choice of lowest value money cards,then there’s that bloody beggar he demands either Bread or a coin from players, got no bread your going to have to pass over the cash hope the the rich man didn’t just pick up a big pay day, because he might be making a donation.

The Old Man draws money cards with a multiplier dependent on his overall deck of cards, this can haul a heap of cash in the later stages of the game. The Merchant is another interesting card, she can take all the goods cards of a single type in the market, I can’t tell you how many times I’ve sat and watched a pile of gems get whittled down as I wait for it to come around to me to act.

The Jailor now he can be fun, when played if The Thief, Pirate or Outlaw cards where previously revealed then they have to stump up a fine of a random goods card and then he even gets to draw a money cards as salary. Now you might be thinking of taking that role every time it shows up, but here’s the rub. Depending on where you are are in the draft of roles, you might know those other roles are in the hand being passed and take the Jailor and hope at least some of the others choose them, But you might also be the last to act then its a gamble if any of those cards are even out there, do you risk it.

whilst at first it appears a pretty simple game there is quite a bit to think about, the roles always play out in the same order and with many of the cards interacting with the Market it means that its always in flux and you can never guarantee whats going to be on offer, so you can take the early roles and dive in quick for a small specific reward or go for the long game taking one of the far more powerful characters and hope by the time it gets to you that their ability is going to be pay out. 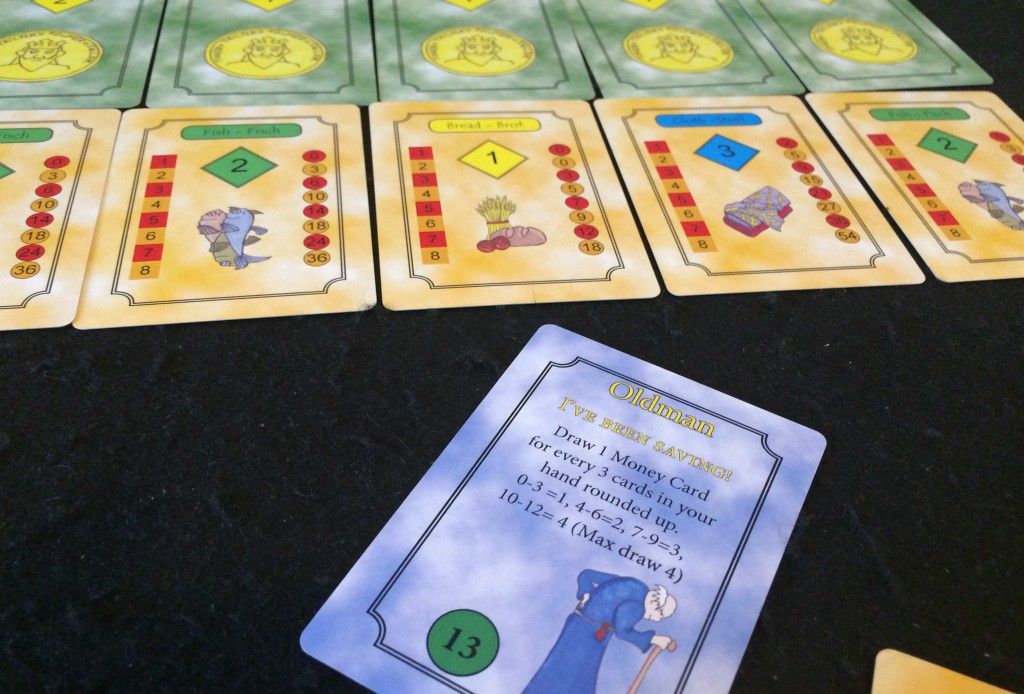 Presume that I haven’t formulated an opinion yet, tell me, should I get this?

Yes is the short answer however if you will indulge me I’ll give a more rounded final opinion.

Coming at it with my Captain Critical hat on there are a couple of things i would be remiss not to mention. The elephant in the room is how it looks, its functional but in this age of beautifully rendered art on our games its very easy to turn a nose up at something that is a bit of a Plain Jane, the actual design of all the cards is great making it easy to instantly understand the information being given. The art choice may unfortunately hold some back, which is a shame because as I’ve said this is great game.

One other issue I ran into when first getting this to the table is the downtime as the role cards are drafted in the early rounds, the larger the group playing obviously the longer this process will run, its really only an issue with the first couple of rounds of play because as everyone becomes familiar with the actions then the game can get moving again.

If you’re a fan of these style of card games then this is a worthy addition to your collection. I’ve not personally encountered another that uses all of these mechanics in play at the same time as this does. So whilst it has the feel of other games a dash of Dominion, a touch of Coup and a waft of Citadels it also has enough of its own ideas to feel unique. With just a deck of cards this game packs a serious wallop of play whilst nimbly managing to balance a satisfying entry level game with enough emergent tactics and strategies for it to be something tabletop enthusiasts would be remiss to pass by.

If you’re interested in picking up a copy Tinker Tailor can be found on Medusa’s web site.