1
WDR Mumble Jumbo – November 29th
previous
To the EXPO and Beyond Part 1
random
next
Who Dares Rolls TV, its the same rubbish but now at 25fps.
2433 views 0 likes 0 comments 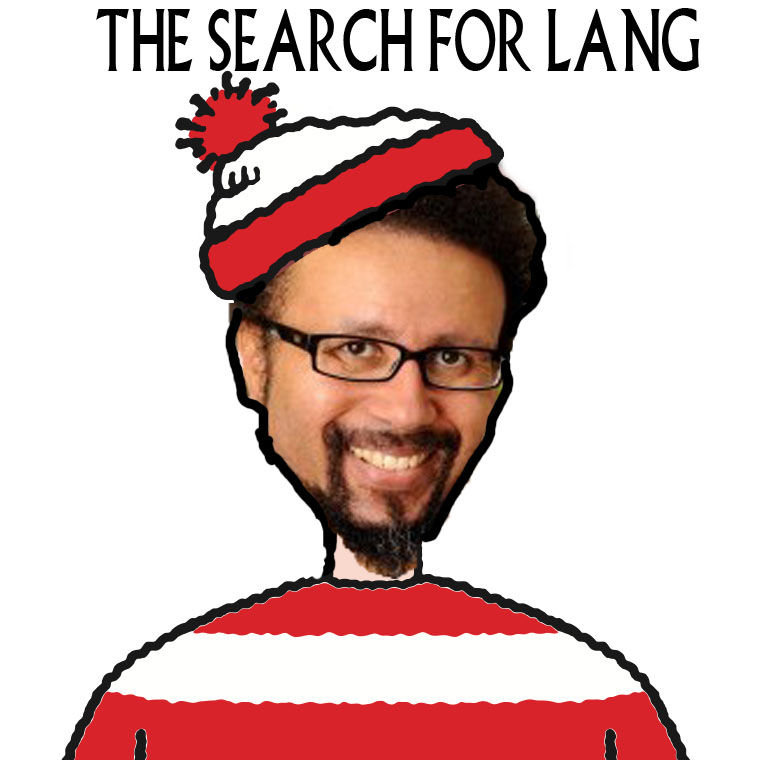 Being the proper and correct account of the misadventures of Mike B and his belligerent and overworked Editor Chris B.

I was startled awake by what could be best described as somebody repeatedly and violently inserting a cat into a Tuba. The room was a wreck, resembling some kind of post-party apocalypse wrestling myself free of the bed sheets I disgorged a rainbow-hued torrent of meeples and counters, whatever deranged events had taken place the prior evening were probably best left to the fractured remnants of my memory. Peering over the end of the bed I found the source of the audible assault, my editor face down in the remains of a family size bag of pork scratchings contently snoring. After a swift, violent admonishing he was sent on his way to secure coffee the camera its tripod and sound equipment roughly inserted about his person I then commenced the epic process of making myself appear vaguely human.

Arriving at the hall the first in a series of cataclysmically well-intentioned but ultimately stupid decisions were made. We would move from the relative comfort and safety of the stand and go on foot capturing the hubbub and bustle of the show floor, from down in the trenches. All fascinating, brilliant ideas that my Editor enthusiastically spouted laying out his vision for the day, we had just a couple of minor issues that we were underestimating, one it was Saturday already known to be the busiest day of the show, with potentially some 15,000 people traipsing the hall. The hall we were about to try and navigate with a camera and dolly and various other equipment, And two it was SATURDAY!!
I stared with growing resentment at my editor while he jabbered resisting the urge to punch him in the throat, and instead found myself nodding in agreement that this would indeed be a very good idea…

Now, what I wasn’t going to acknowledge to him was that some of this did fit into my game plan, we’d already had sightings of Lang out in the wild yesterday, and we’d personally had two separate contacts with him. I was my plan that we would track and catch him out in his natural habitat of the convention floor, secure him and return him to the stand for an interview, it was the only way to guarantee any sort of success from this debacle.

It’s at this point gentle readers we must take a short break to warn you of the dangers of gaming at conventions. Luke from the Broken Meeple had stupidly signed up for a game of Mega Civilisation. Released at Essen last year Mega Civilisation comes in a robust wooden box that could be easily used as a coffin for any beloved household pets that expire during its bladder destroying play time. Already they had been playing for some time, and I looked over at the poor dumb fools some slumped barely conscience others looking forlornly at neighboring stands displaying light filler games such as Twilight Struggle. No matter how clever it seems at the time, never sign up for any game demo’s that could last longer than a Euro players attention span. 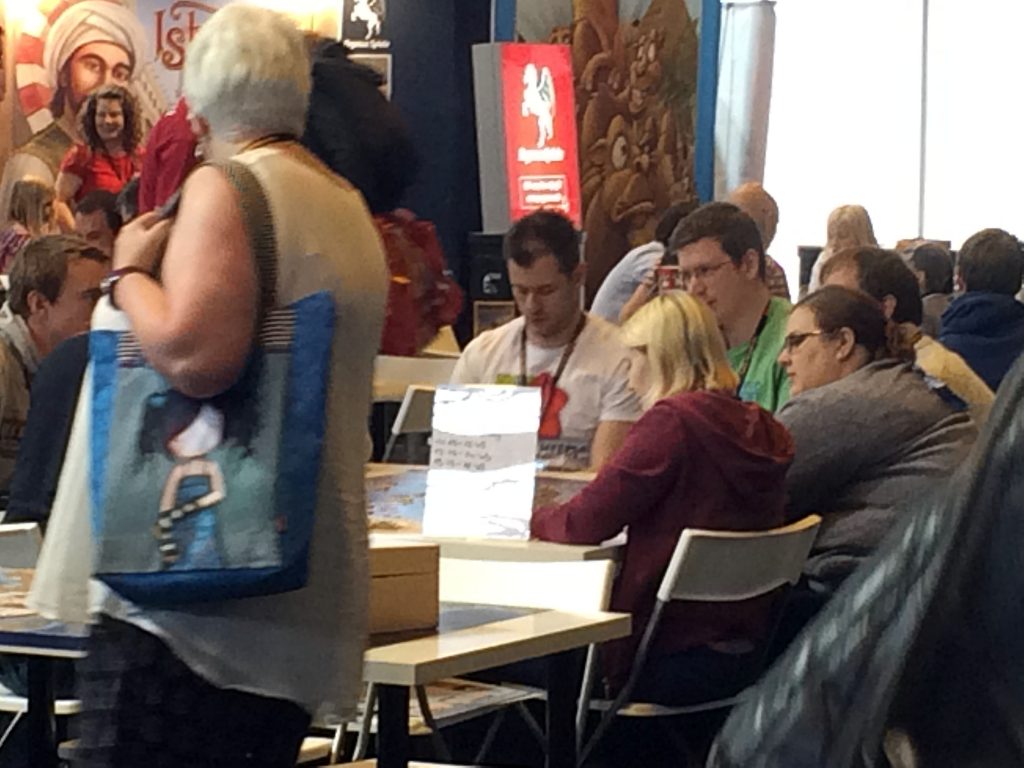 The doors were already opening, and I’d not had my morning coffee and despite my griping, Chris shoved me towards the YAY games booth and Andrew Harmon to chat about his new abstract dice game Ominoes.

Moving swiftly on, we had plenty of ground to cover, and we passed Stuart Garside at District 13 and his recent Kickstarter Ember.

And then Peter Blinkham and his wonderfully colourful take on Politics Statecraft, I became strangely fixated upon his beard and the interview had to be repeated several times.

The air about us was suddenly cut by the buzz of projectiles, and some rubber shuriken bounced off my head, and delicate areas as I waved my arms about in defense nearly blinding a small child, I think some wee came out. Stepping out of the shadows more vicious projectiles readied in hand it was Phil @aSheepie my Patreon backer and virtually employer, he scolded us for the weak defence and that we should hunt down a designer in a black shirt and white tie to play his new design, having left this cryptic Easter egg he disappeared into a cloud of ninja smoke. I vowed my revenge and cautiously moved on.

Chris then directed to a prearranged interview with the gents from The London Board Games Co. And The Football Game. I stared at him blankly as he explained what we needed to cover in the interview “Footballs the round ball right?” after some quick priming on the wonderful game and how to do goals I dived in like the pro I am.

Spying a stand from across the way, displaying graphics for the Warlock of Firetop Mountain and a new dungeon crawl of said legendary license I started frothing at the mouth and made a beeline for it. Using my newly acquired sporting prowess, I performed a textbook dive towards the broil of punters and would have been trampled to death save for the fact I’d been holding the microphone. Its cord snapped taught, and I was suspended at an awkward skew until my Editor reeled me back in with that faintly disappointed look in his eye. Pressing on we gathered what remaining dignity was available and had a chat.

Rather aptly named nearby was Mad Beard Games showing Wasteland Justice their interesting take on road warriors and mayhem in the post-apocalypse. I raved for a brief period and became quite excited, potentially terrifying Matt, who valiantly attempted to demo me. My editor did manage to piece together something from my mad vowel rolling and moved on quickly as security were heading our way.

I froze suddenly ahead of us just visible above the heads of the crowd was the unmistakable gout of black fuzz, it had to be Lang. I turned to Chris with that look in my eye, and he shook his head, but it was too late I was in the midst of a designer frenzy and took off. 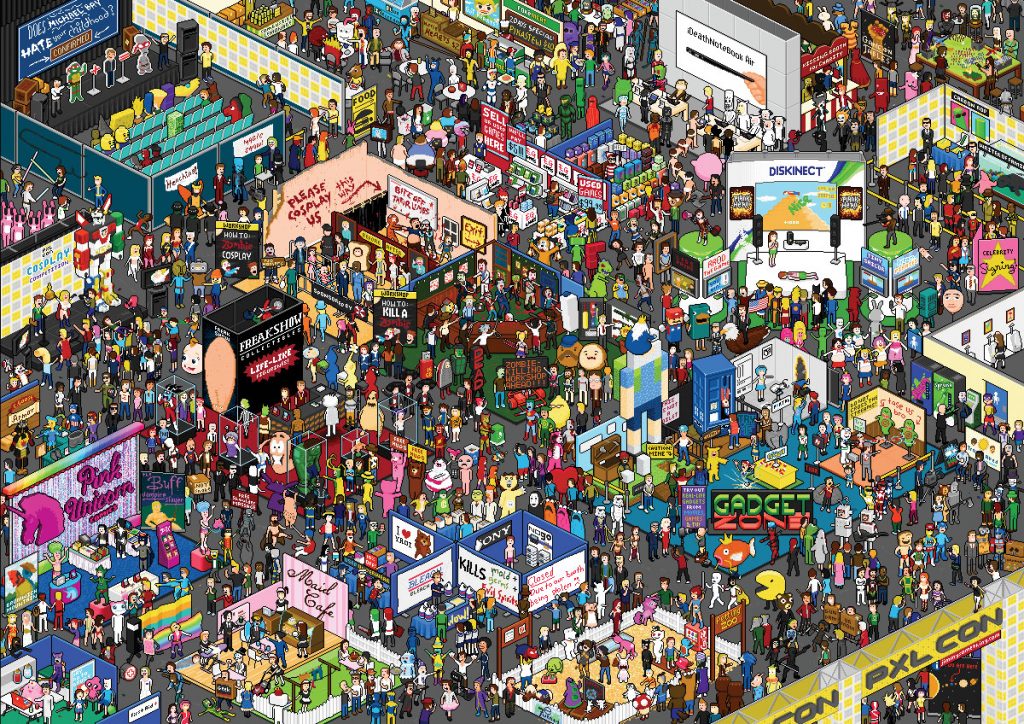 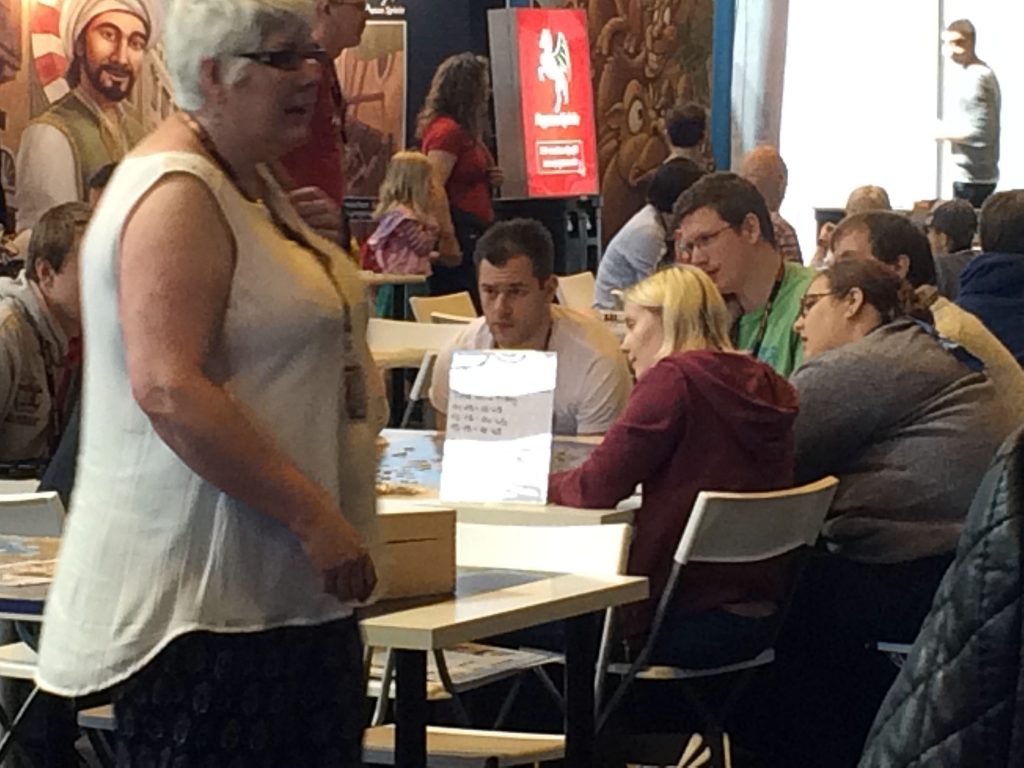 Back to Mega Civilisation. As we can see now, several hours in Luke is displaying the patented I need a poo face. His bowels apparently pushed to straining it will be interested to see how he will tackle this problematic issue at this late stage of play.

Having lost Lang somewhere around the toilet block and injuring numerous gamer’s with the erratic movement of the tripod we paused at another stand that had piqued our interest during Friday Mornings press junket. GCT’s Pioneers Program a card-driven game of building your settlement in all together now people “the post-apocalypse.” It has super stunning art and can’t wait for it to hit Kickstarter in the next couple of months. 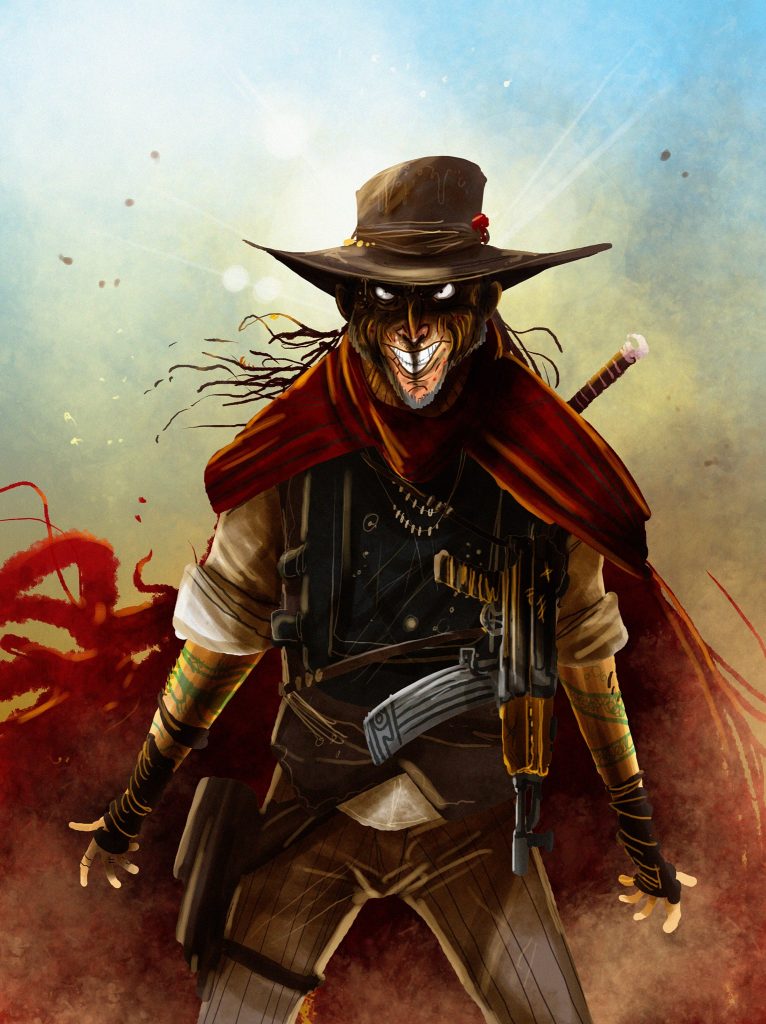 Bushido! also from GCT their miniatures skirmish game set in the mystical far east, unfortunately, I became obsessed with the lovely Gordon and his beard. The game offers a refreshing alternative to all the space marines and orky mayhem on the market currently and is well worth a check. 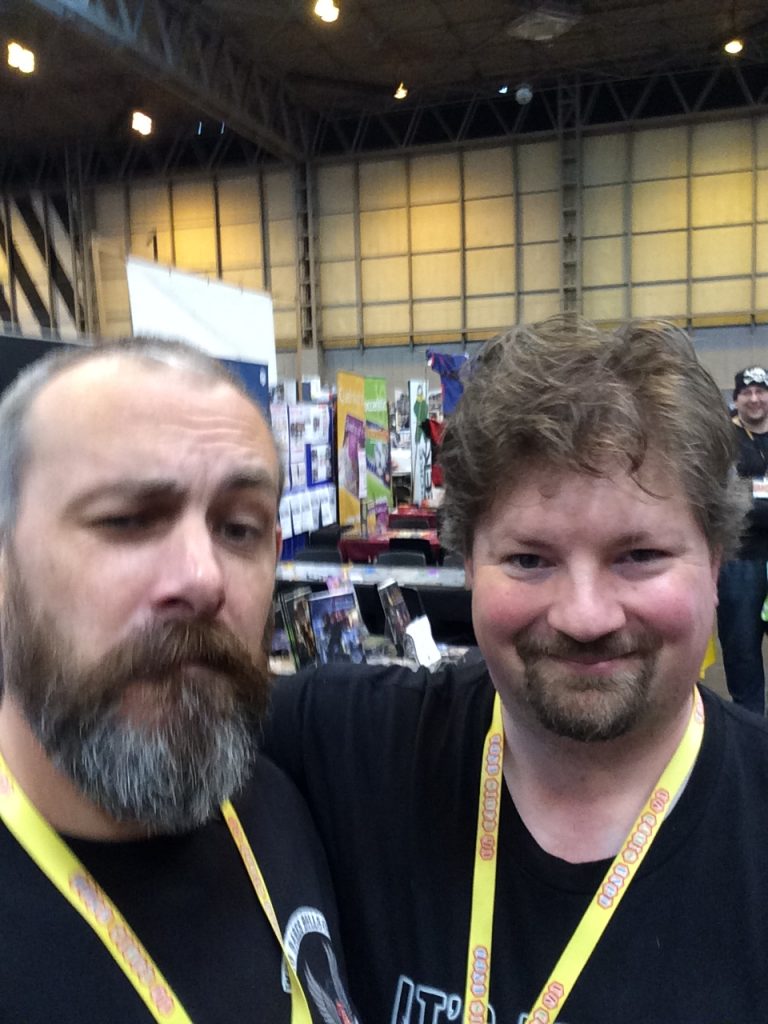 Traveling back to the stand I was suddenly set upon by an excitable chap who looked a bit like one of those hobbits from New Zealand, at first we thought he’s spotted Tom Cruise or some other mega celebrity but no, it was I your humble narrator for which he had pitched a tent. Jonathan is this chap’s name, and he is my No.1 fan. We picked up some of his stands Shades of Vengence RPG goodness to share with Charlie and Era: Lyres the little rules book for running a game of bragging and tall tales in a fantasy bar that shall most certainly turn up on the podcast at some point.

We bumped into a Bez! And we took a look at his magnificent In A Bind and like the idiot I am promptly made a fool of myself, for a change. 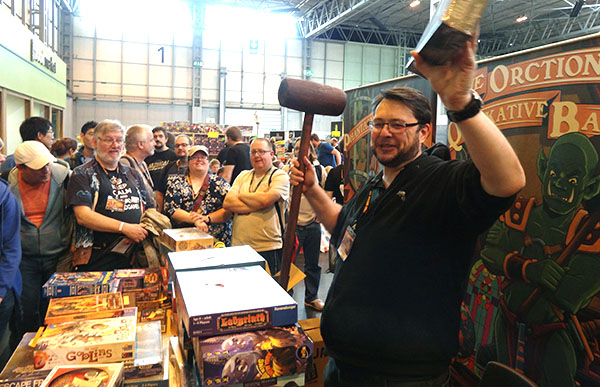 We attempted to fight through the massed crowds at the 3:00 pm Orctions event and epically failed, throwing caution and personal safety aside a clambered on a chair and screamed various indecipherable gibberish aloud, some of which was recorded, none of which would prove to be useful. I also spotted a Lang shaped object moving furtively across the show floor and leapt down landing into a game of Table Tantrums, feeling a tad awkward we decided to play it cool and interview them like the professionals we are.

While navigation the hall we chanced upon Multiuniversium, a game I couldn’t pronounce correctly despite the best efforts of the designer who himself eventually gave up trying to correct me. It had killer gummy bears, and that was enough to keep me happy for a while.

We spied Tom Norfolk and his excellent Stak Bots (Red expansion currently on Kickstarter people) and excitedly raved at him about the new set, which is really rather cool, and something you should try.  And then virtually leaped upon the startled Mr. Gil Hova and his scrumptious Networks game, which I like a lot and totally missed the opportunity to buy. Dammit! 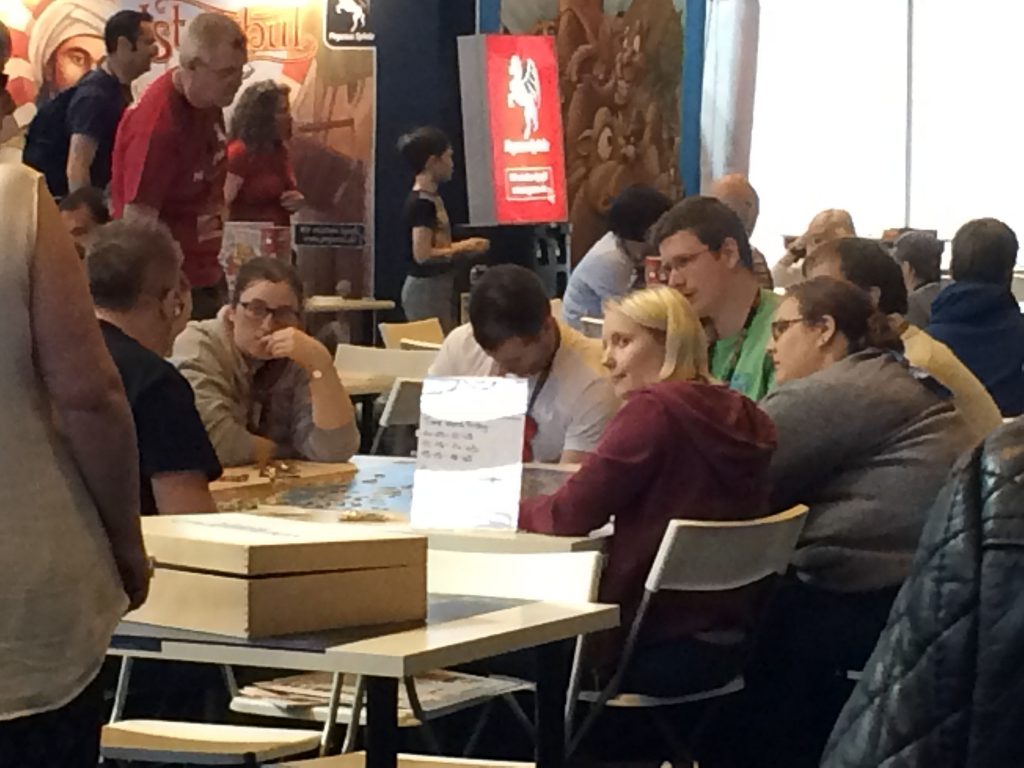 Luke meanwhile had succumbed to the excitement of Mega Civilisation and was slumped in his own drool and various other bodily secretions and not all of them his own. We snuck slowly passed him so as not to disturb him, as he was clearly in the zone.

We headed directly for the Hilton, where Lang had been spotted, and we lingered filming and looking a bit stalkery, although once again when we’d paused to discuss the next course of action he’d vanished bypassing the traps, I’d set the devilish little ninja he is.

Chris had to do one of his dump things and not wanting to be around for that, I sloped off with Tony from my local game group. While scavenging around the bins near the food trucks, we happened by complete chance to bump into David Turczi designer of Redacted and the currently funding Days of Ire: Budapest 1956, in his black shirt and white tie combo as described by Phil. I quickly grabbed his arm demanded a demo fearing a reprisal of the whole ninja star attack. Seeing the desperate glint in my eye he offered us a game, citing it as a mashup of Twilight Struggle and Pandemic sounding pretty cool we dived on in. 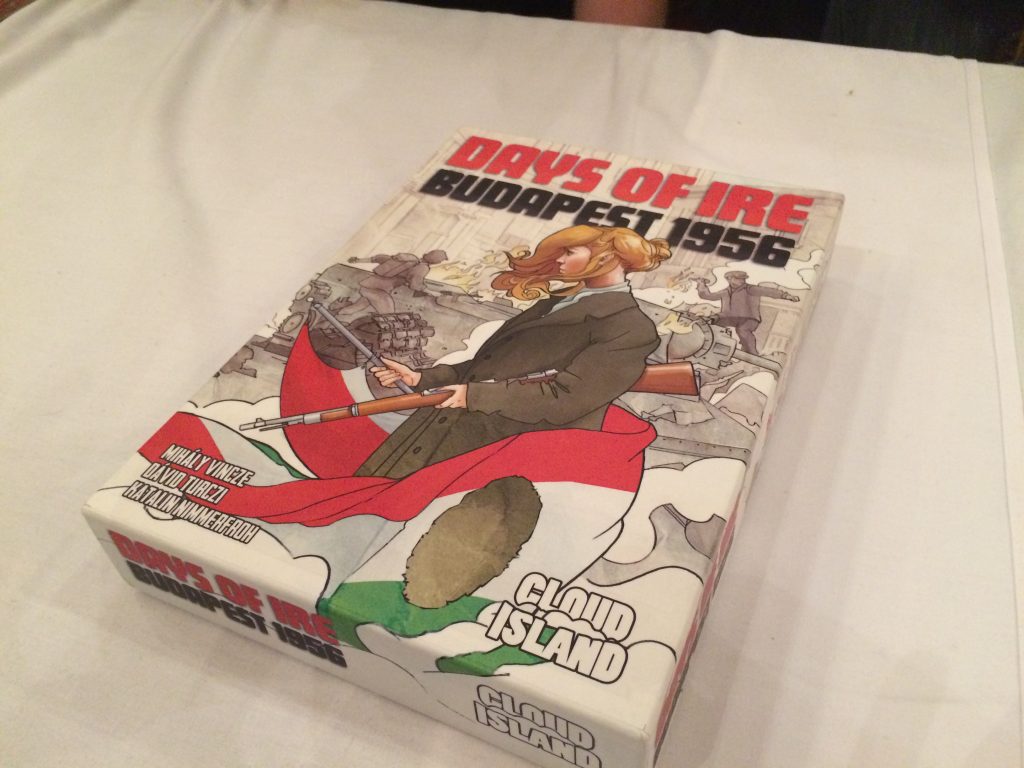 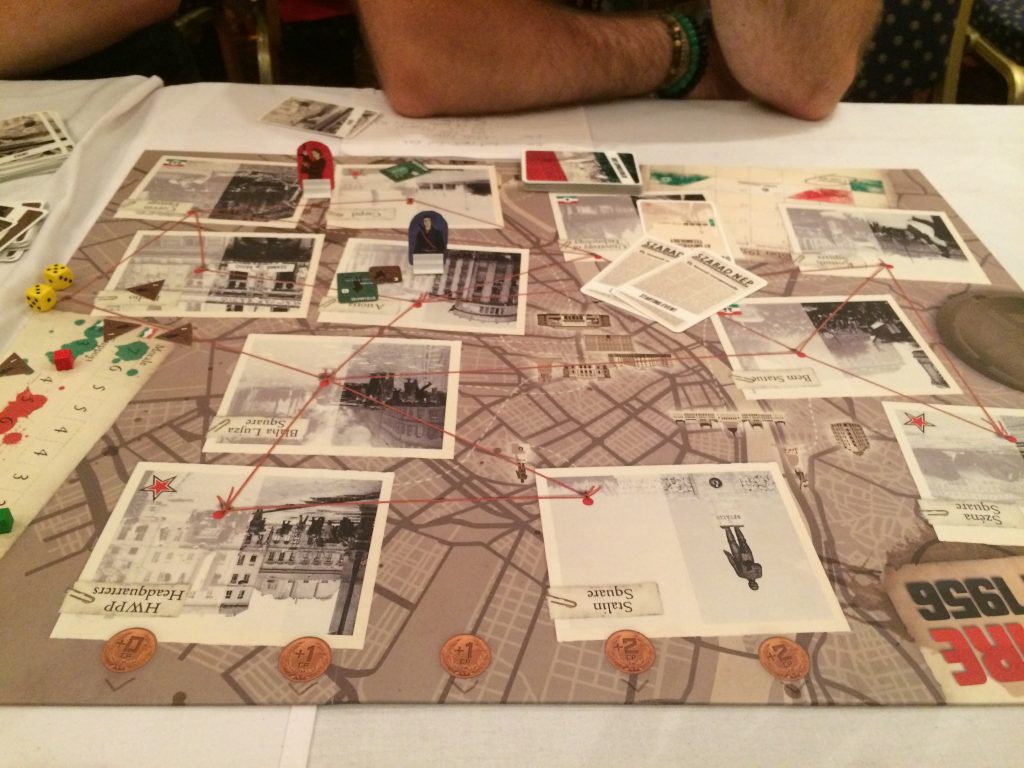 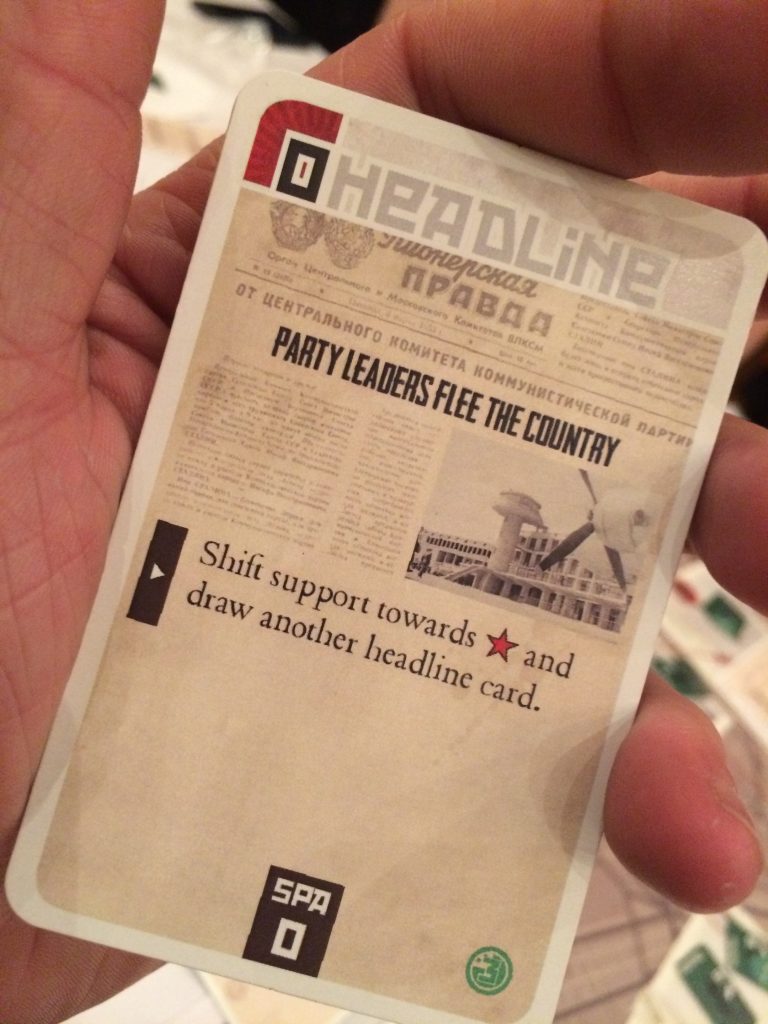 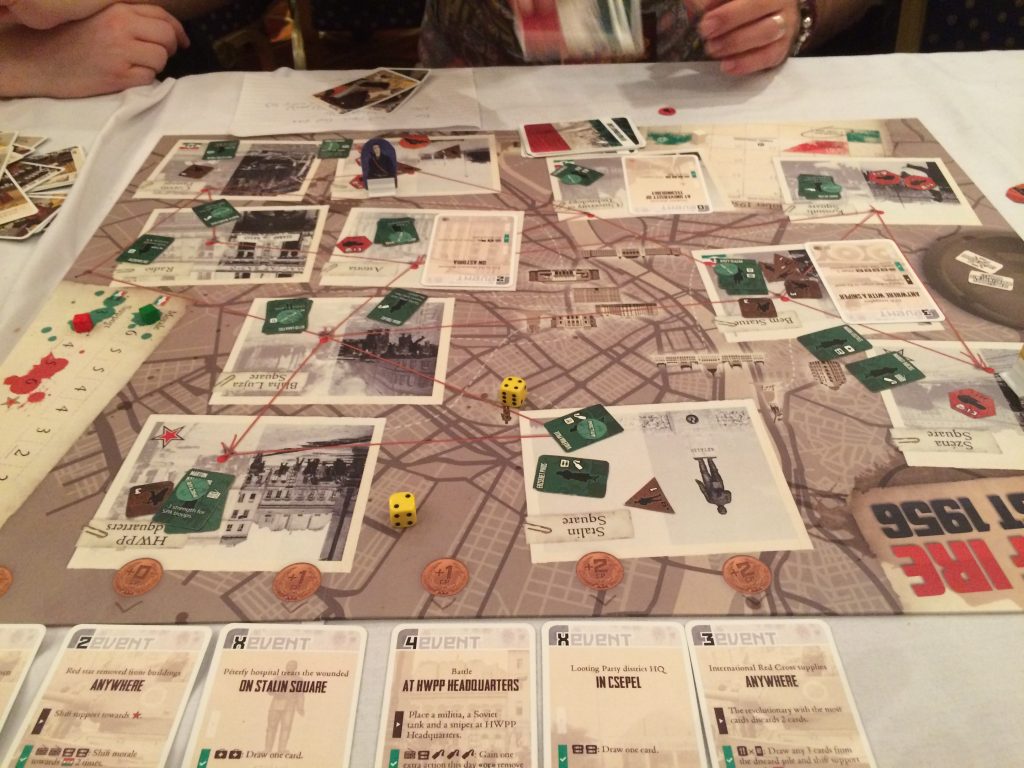 Wow! just wow, after a frantic hour and a half of intense game play that saw my Russian forces pushed to the brink before a late turn of luck for the resistance saw them Molotov cocktailing my tanks and leaving my forces sprawling across the city unable to react. I lost but what a ride.

Buzzing with an over abundance of enthusiasm for the game I spied Tom and Sam from the Dice Tower engrossed in something that was blatantly not as brilliant as what we’d just played he was also sat  with a now refreshed and cleansed Luke and Jay from Breacher 18. I barged into proceedings demanding he instantly take a look at Days of Ire confused and possibly concerned for his well-being he obediently did so, before politely sending us packing. 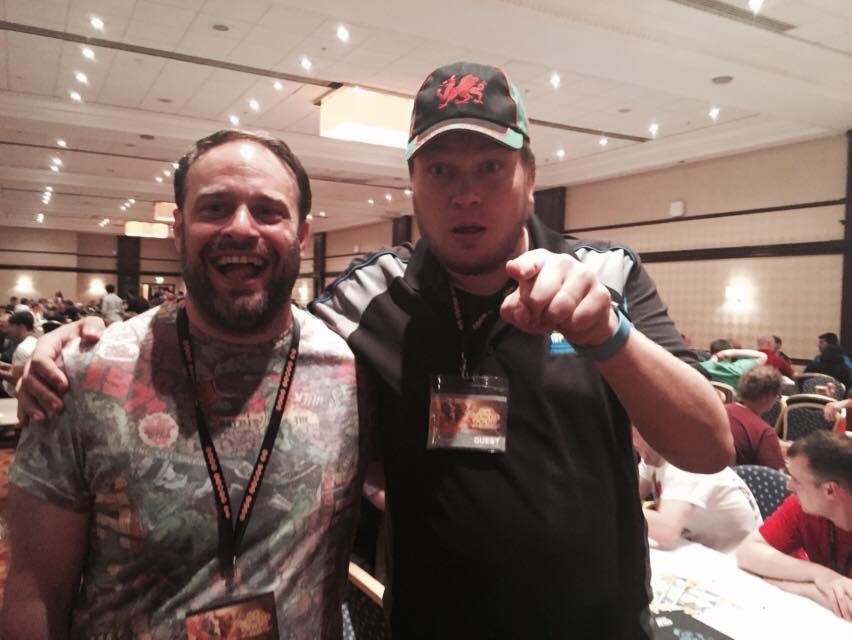 Tony embracing his inner fanboy wanted a picture with Tom and handed me his phone whereupon I shouted at him to shut his own fecking door, and we fled quickly lest an incident took place…

London Toy Fair 2015
Be the first to comment!
Leave a reply »