Moby Dick or, The Card Game. 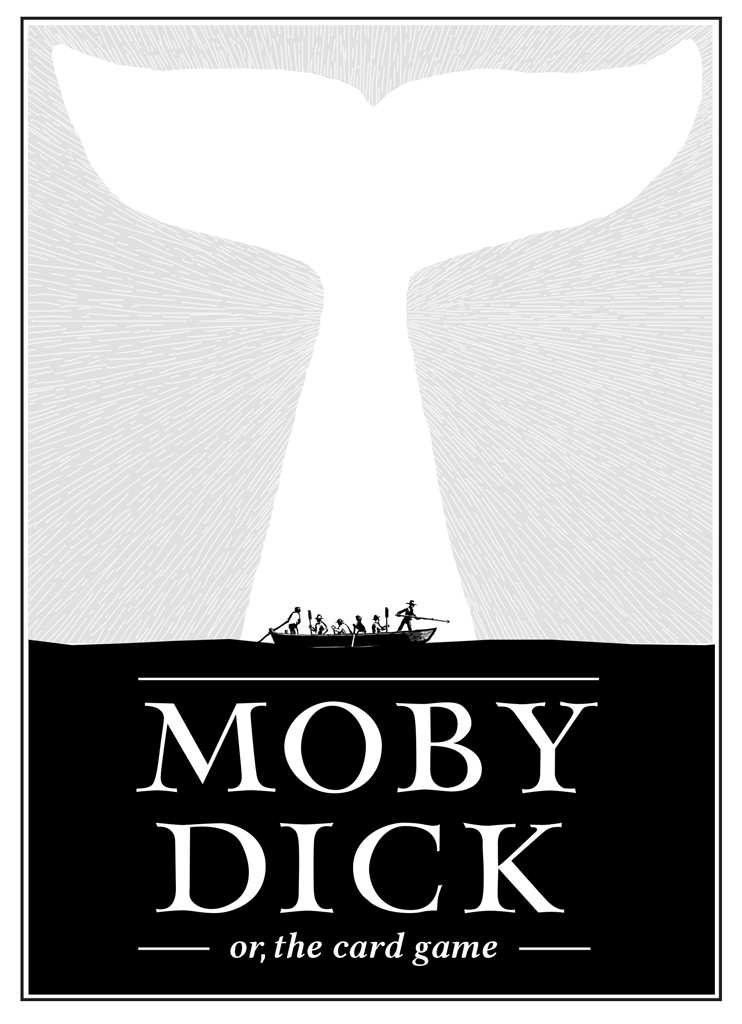 This is a great theme desperately in search of a game, so thematically that's bang on. This is only worth seeking out as a curio, there really isn't enough blubber on this carcass to make the hunt worth the while.

Moby Dick the novel of whaling by Herman Melville has always been something of peculiar interest to me, the book is a strange beast rather like its title character. With its large digressions into the minute of whaling and a barrel full of subtext  it’s not for everyone and for many its a baffling or frustrating experience. When I first stumbled across King Post and their Kickstarter for a card game based on this very famous book I had to give it a second take.  And once I’d taken a look and seen their plans to bring this salty tale to a tabletop how could I refuse.

And much like the aforementioned work of fiction the game is indeed a lot like the book, not for everyone and at times a baffling and frustration experience, they have in truth managed to contain the book into a card game.

The meat of the experience is assembling your crew of sailors and whaling, and like those chapters from the book chock full of horrific moments of derring do set on churning frothing seas spiced with sudden brutal death, each and every moment your are on the hunt attempting to bring down several tonnes of whale meat with a pointy stick are every bit as tense. Inevitably it will often end with shattered boats and broken and lost sailors and grog, lots of grog.

My first two attempts ended swiftly with my entire crew lost and the dawning realization of the awful prospect of continuing along this chosen path and what it might mean for my sanity. Before long I’d become Ahab complete with a self destructive determination to track the white whale and vanquish him, and like that mad obsessed sea captain it didn’t end well.

The game is played with three decks of cards, The Sailor deck, The Sea and The Whale.

A turn will see you flipping one of the Sea Deck over and seeing what delights that brings, is it a chapter from the book? bringing with it modifier’s to your crew and ship maybe even a quest with the promise of casks of precious oil. These are interspersed with brief moments of tranquility where you might put to shore and gain more crew or oil and then there comes the whales and the hunts. All the while waiting in this deck are fleeting glances of the white whale, the cards opaque save for a few ponderous words of foreboding from Melville, each like the dull death gong bringing you closer to the inevitable moment when you will meet. 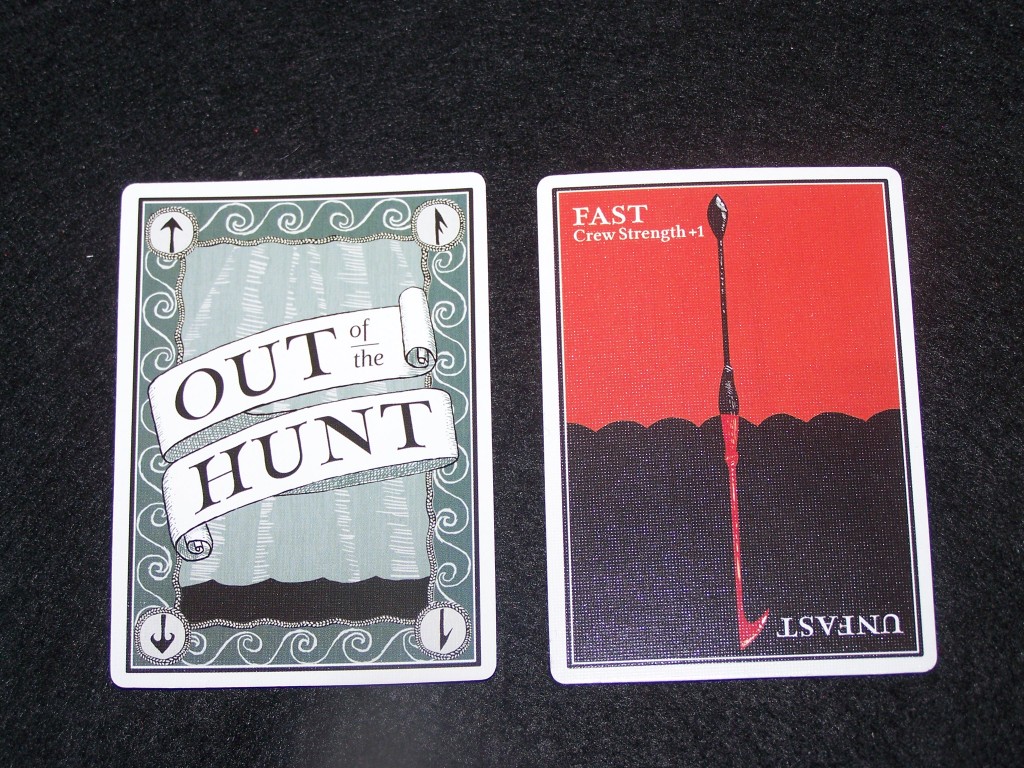 The hunts which form the guts of this game see you setting out in your flimsy wooden vessels going harpoon to flipper with these watery leviathans. At every turn during a hunt you are outgunned, the odds unsurprisingly stacked in the favor of these gigantic creatures and with sensible hesitation you turn a card from the Whale deck, no doubt bringing with it some likely form of instant ruination upon your unlucky crew.

The hunts are tense and nerve shredding as you roll the dice praying to get enough just to hold fast struggling manfully as you are dragged in the wake of these creatures knuckles whitened on the hafts of your imaginary harpoons. Its exhausting and tense, short and violent, everything you would imagine the life of an 18th century harpooner to be.

If you manage to bring one of these majestic beasts down you can use the casks of rewarded oil to buy more crew or perhaps bribe them from a neighboring crew, and then its out into the icy clutches of the ocean for more carnage.

When the inevitable climax occurs and the white whale finally hones into view its a terrible moment of wanton destruction, it will see everything you’ve fought to amass shattered and destroyed, and when the waters finally still only one lone sailor will be left, floating among the debris.

Some years ago – never mind how long precisely – having little or no money in his purse Joel Clark one of the games designers pitched the idea of this game as something more epic and to be brought to life on a video game screen, imagine Shadow of the Colossus set on the high seas. If you’ve played that marvelous piece of video gaming history you will recount it was a beautifully lyrical tale that stared into the heart of darkness. Perhaps it explains why this never saw its way to a pixel, it would have been amazing, but seen by about 3 people. Passed over no doubt, in favor of some gun toting first person iteration of War & Peace.

Fortunately it came to Kickstarter and 2,583 of us where convinced of the greatness that lay just below the surface. 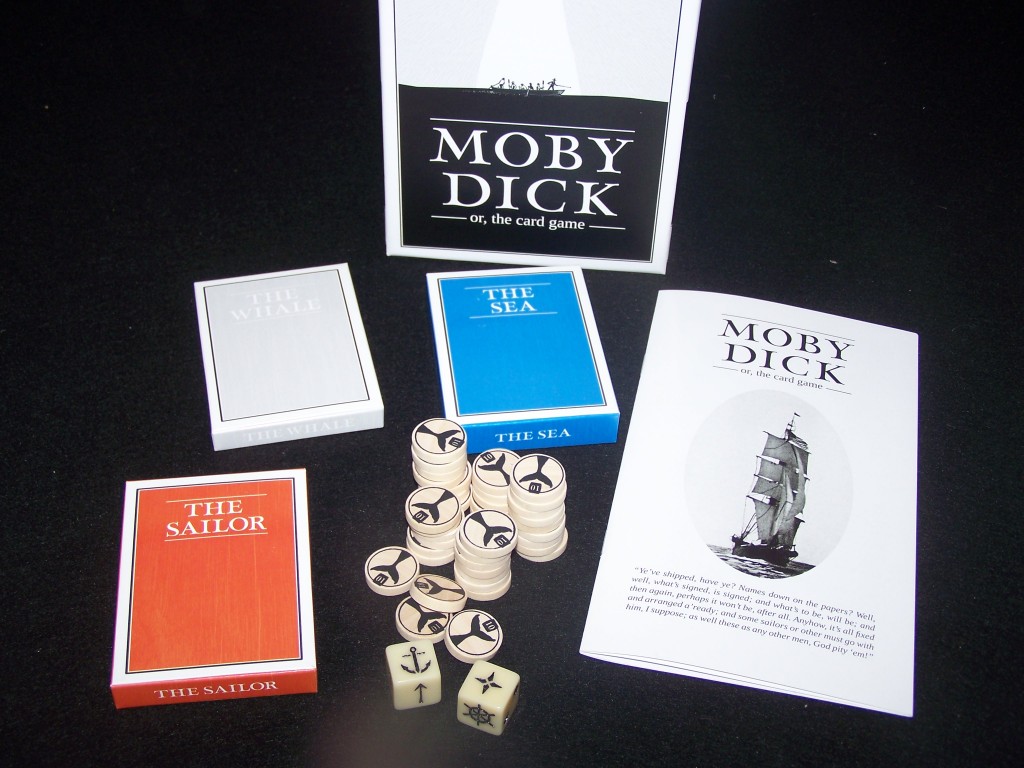 And let me be clear, this is a great game, the components are beautiful. The custom dice have the look and feel of something you might find stashed in the bunk of an 18th century sailor. Each of the cards depict weathered visages of characters from the book, presented like wood-cuts. The art and design in all cases has been perfect helping to immerse the player in the theme. The box itself shows the same simple elegant design within and wouldn’t look out of place on any discerning bookshelf.

This isn’t for everyone, certainly someone who has read or has more than a passing interest in the source material will take much from this. To your casual gamer I suspect they will find it a frustrating experience with the steep learning curve and sudden and anti-climatic finale that leaves no victors jumping with joy, more a resigned slump of exhaustion. So my caveat is approach with caution oh casual traveler for inside lurks more than just a simple card game.

Or as Melville put it far more elegantly than I.

A noble craft, but somehow a most melancholy! All noble things are touched with that.

I applaud king post for what they have attempted here to merge the worlds of of classic american literature and gaming together, and give us some crazy hybrid. And for that they have my gratitude and if they are looking for inspiration for a follow up, personally I’m rather taken by another little seafaring yarn, Jaws?

If you want to fetch yourself copy of this marvelous work then gird your loins, its coming, I believe that the original print run has already sold out. Keep a weather eye on King Post’s website for updates and for when the store re-opens.

Until our paths cross again my bosom friends.