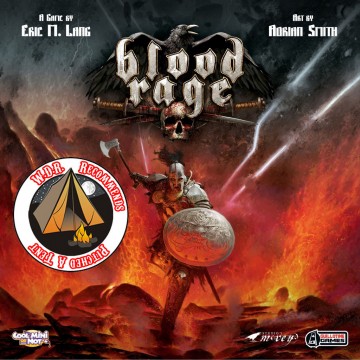 This is a thing of beauty from the stunning Adrian Smith artwork to the uproarious miniatures.
The rules and mechanics are surprisingly easy to grasp.
Scales well from 2 players and up.

Its not cheap, but then you get all that booty in the box.
The 5th player expansion being an add on stings, but you do get a completely new sets of sculpts for you're money.
You can get that run away leader problem if someone is allowed to go unchecked.

Overall this is a barnstorming heap of brilliance. The miniatures are all stunningly realised and the monsters well their bigatures are insanely silly but oh so cool.
Its a refreshingly free of fat game experience, offering oodles of emergent play and repeat possibilities for different tactics, despite its Ameritrashy outward appearance Euro players will find a lot here to enjoy.
This could very well be as good as everyone is saying it is.

I’ve had a love-hate affair with Cool Mini or Not while it can’t be argued that their games offer an abundance of glorious trinkets I’ve found them often lacking in anything substantial. Zombicide for all of its multi-million dollar success is essentially a box jammed with great looking minitures in search of a set of rules.
Fortunately, the recent addition of Eric Lang to their roster himself on something of a roaring rampage of game design success gives me hope that their titles while still containing vastly overproduced toys might now accompany a rugged design skeleton for these adornments to hang. 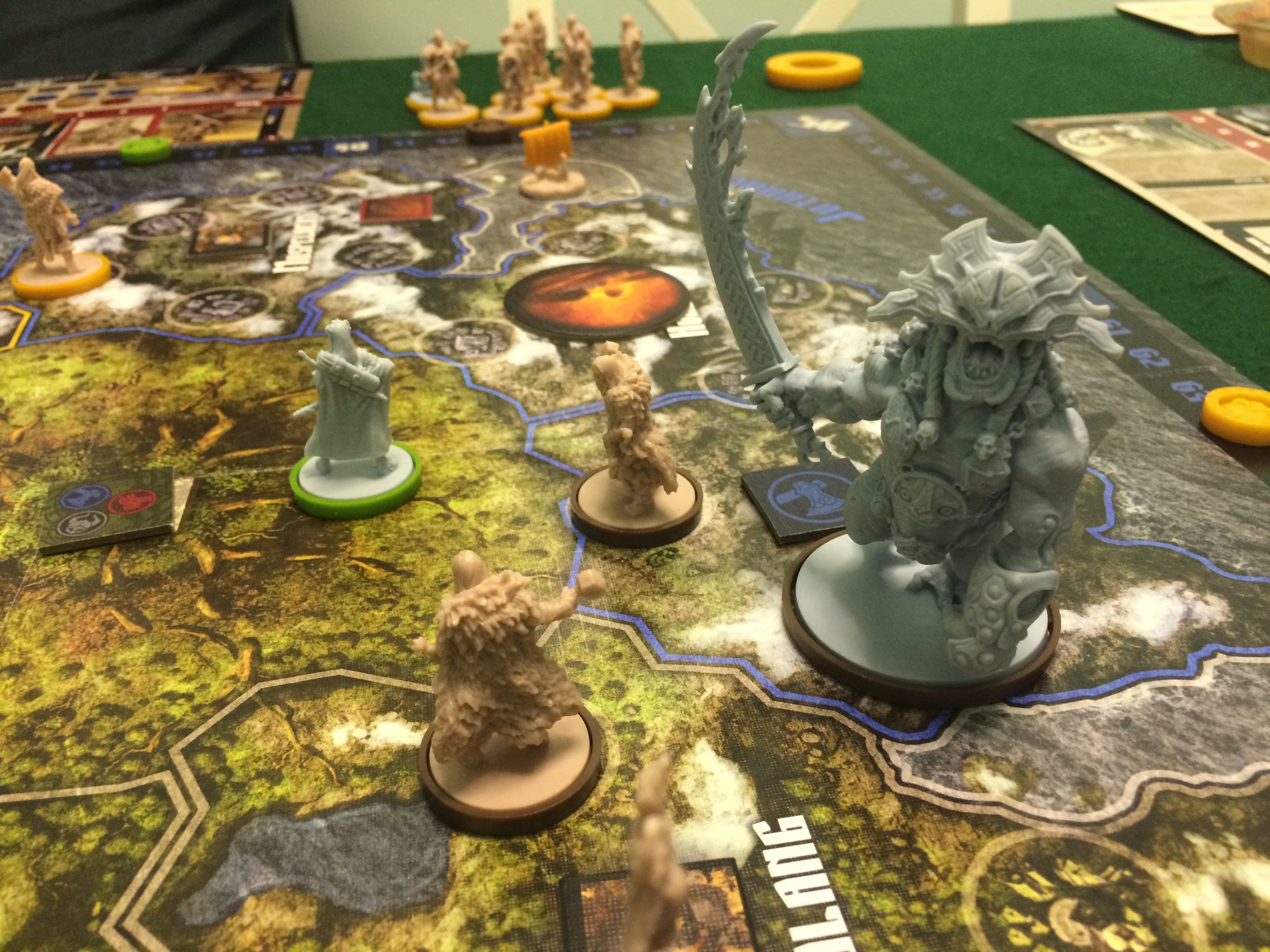 Blood Rage has erupted onto the gaming scene with the same ferocity of the Ragnarok inspired mayhem at the centre of its design. The hype machines been churning at full froth with players and reviewers slathering over it, so has everyone been blindsided by all the loot or is there a solid game to be found? Come, gentle reader, as we attempt to get to the root of this particular god tree.

The central conceit behind the game is that Ragnarok is coming, the mythical Asgardian realms are going big ba-da-boom! So the assembled Viking clans being essential a bunch of heavy metal nutbags intent on a beautiful death see this as the opportunity of an all you can maim buffet of wonton violence and mayhem. The clan attaining the greatest amount of Glory can go off to their demise safe with the knowledge that they’re be bigging it up in the halls of Valhalla for all eternity. 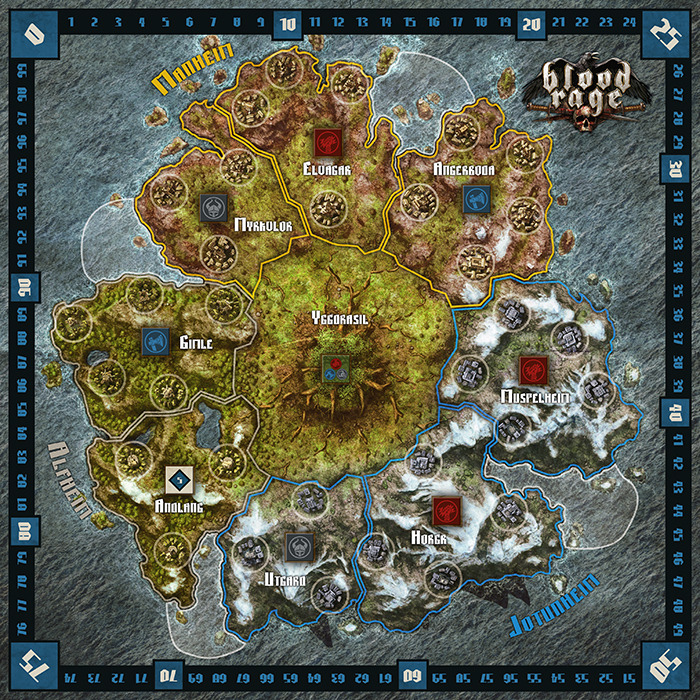 So the game, the first thing I was hit by was how clean the rules are, there really isn’t much to this, the depth and decision making emerges during as to what abilities you use or where you send your units or how you spend your Rage. The game takes place over three ages which at the end of each will see another location on the map being shook asunder slowing reducing the play area. This being a game of area control means that the battles and strategies become more desperate as time and locations run out, every action, every move is important.

The rounds consist of two main actions, at the beginning of each there is a draft. These cards inform how your clan evolves throughout the game and even how you’ll play, they come in three main flavours:

Upgrades these are either for your units, offering more powerful troops or subtle modifiers. Or your clan which essentially allow for you to build a violence engine to convert your increased stabbyness into Glory and finally the Monsters, super powerful units that come with just the most gloriously huge miniatures and some devilishly useful abilities.

Quests these primarily give glory for completion at the end of an age and revolve around either having the most strength in regions or the most dead in Valhalla, successfully resolving these also allows you to improve one of your base stats, which I’ll come to in a moment.

Battle cards. These function similar to the Cosmic encounter fight mechanic. Whenever you get into a rumble for a location, you add up the strength of all your units present as does your opponent/opponents and then you get to play one of these. Some will simply add a large number to your total while others offer chances to remove units or to mess with your foes, it adds a meaty element of poker style bluffing and uncertainty to proceedings.

This draft will essentially inform how that round or even your entire game will play out and it’s really only upon repeat plays that deeper and more emergent strategies start to show themselves. There are plenty of decisions to weigh up as potentially you won’t get to play all the cards and concentrating on one area will leave you weaker in others while not building any synchronicity into your hand could leave you floundering as your rivals race ahead. 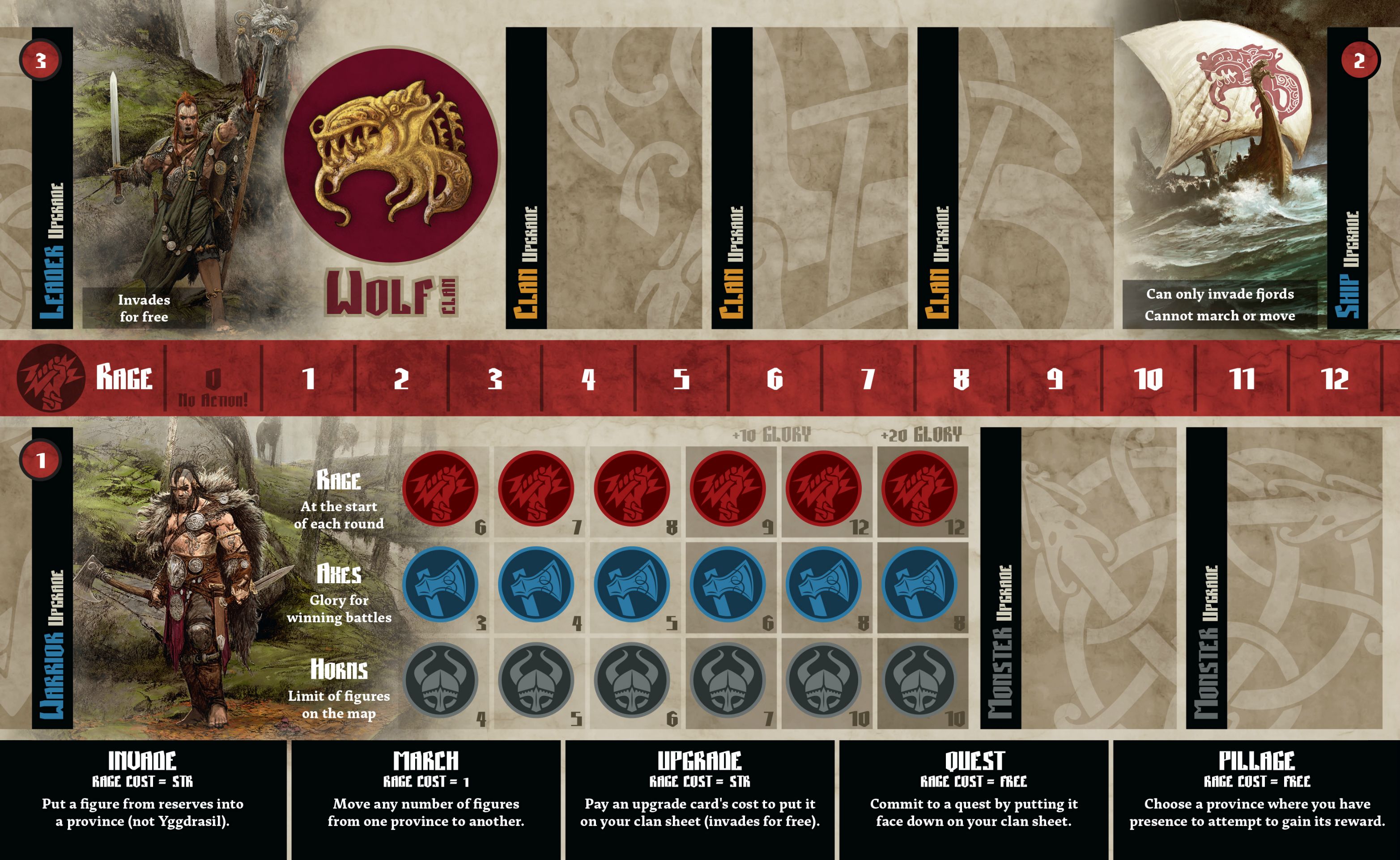 As I mentioned earlier, each clan begins with exactly the same basic stats and these are three main powers that you can upgrade throughout the course of the game. Rage is probably the most important as every action or card played will nearly always have a associated Rage cost. Running out of Rage is fatal as you cannot perform any actions once it’s gone. Axes dictate how much Glory you gain for winning battles and finally Horns dictate how many units you can have in play at one time on the board.

Beneath all its lush thematic trappings, this is essentially a Euro game of engine building and bookkeeping. Everything centers around this violent stock exchange to support your Rage addiction. And the slow emergence of asynchronous clans as each player creates their most efficient murder machine. 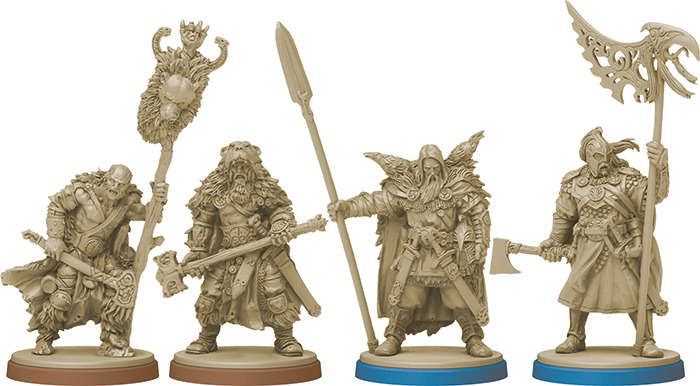 The rest of the game is in the actions phase, taking it in turns each player gets to pick and choose one action. Whether it’s playing an upgrade or quest which will utilise those cards. Invading which will see you placing troops on the board, or pillaging where you can attempt to increase your clan stats from various rewards available in different regions by winning battles. This keeps going until everyone eventually taps out having run out of Rage.
This is where it all comes down to having that best most efficient engine, actions such as the pillage are free if you still have rage, so the slow accumulation of troops on the board is a viable tactic waiting to strike and taking as many rewards as possible. An opponent may, however, have already increased his Axe stat and just go about accumulating Glory through hacking and slashing across the board. 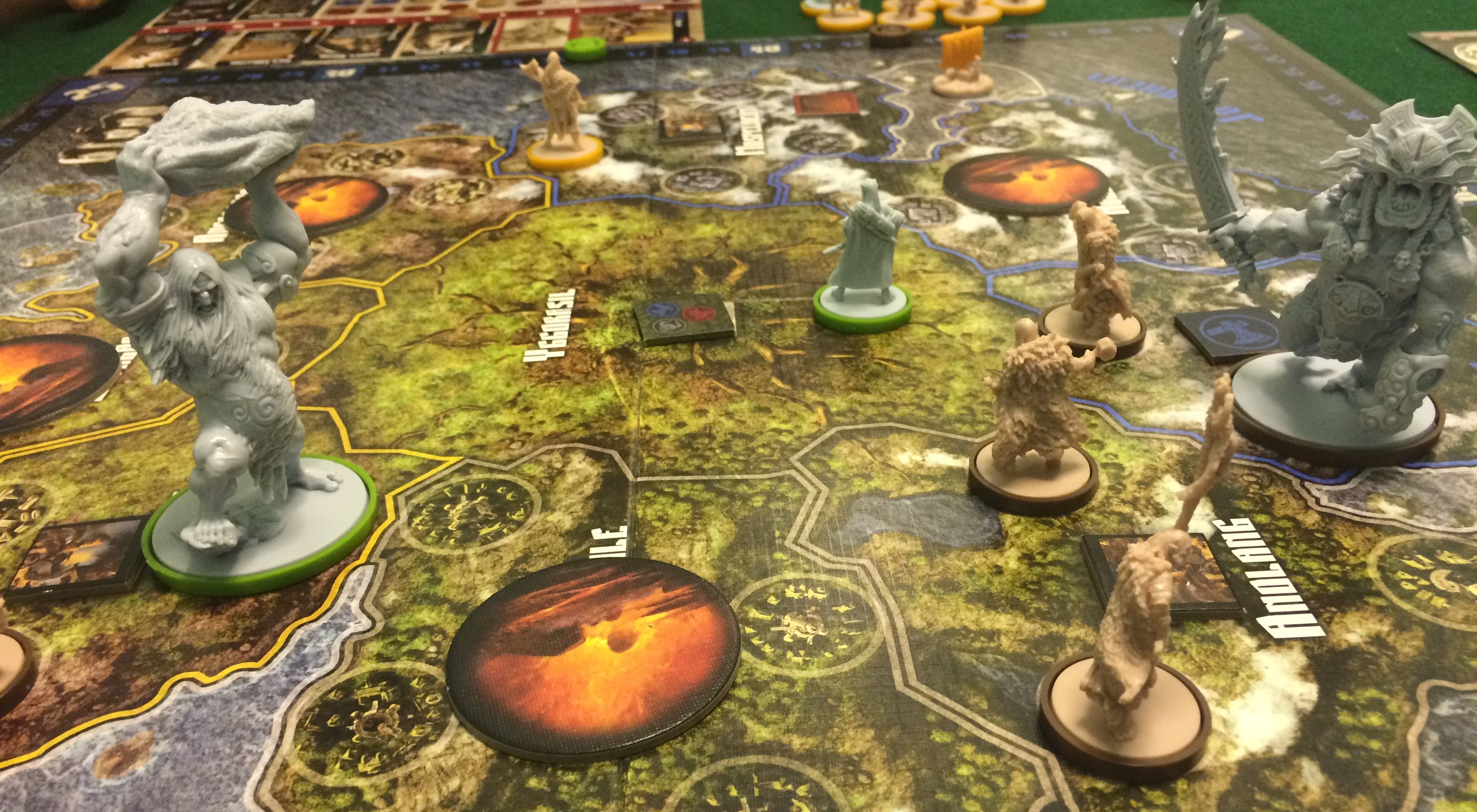 Then Ragnarok happens and any units sat in the province when its nuked gain Glory for having had such a glorious demise and we can begin again.

There’s a great deal going on here, many, many different strategies and tactics and in truth I still need to play more to discover them all. There is the worry of the runaway leader problem, the draft can be unforgiving especially for beginners. Somebody getting lucky and setting up a working engine in the first round if unchallenged can pull away from the others. You can’t afford to become solely focused on your clan or risk losing the war, a strong player going unchecked will eventually decimate their opponents.

So is it any good. Yes, sir, it is. This game finally puts Cool Mini on the map as a true contender to the likes of Fantasy Flight it’s a solid design that welcomes repeat plays with a multitude of different paths to victory. The fact it also comes with such amazing miniatures is the icing on the cake, those monsters are actually ridiculous but so totally satisfying when you get one on the board. Is it as great as the hype surrounding it, probably not but it’s certainly no Phantom Menace and while the price tag may be too steep for some what you’re getting for your money is all there to see? 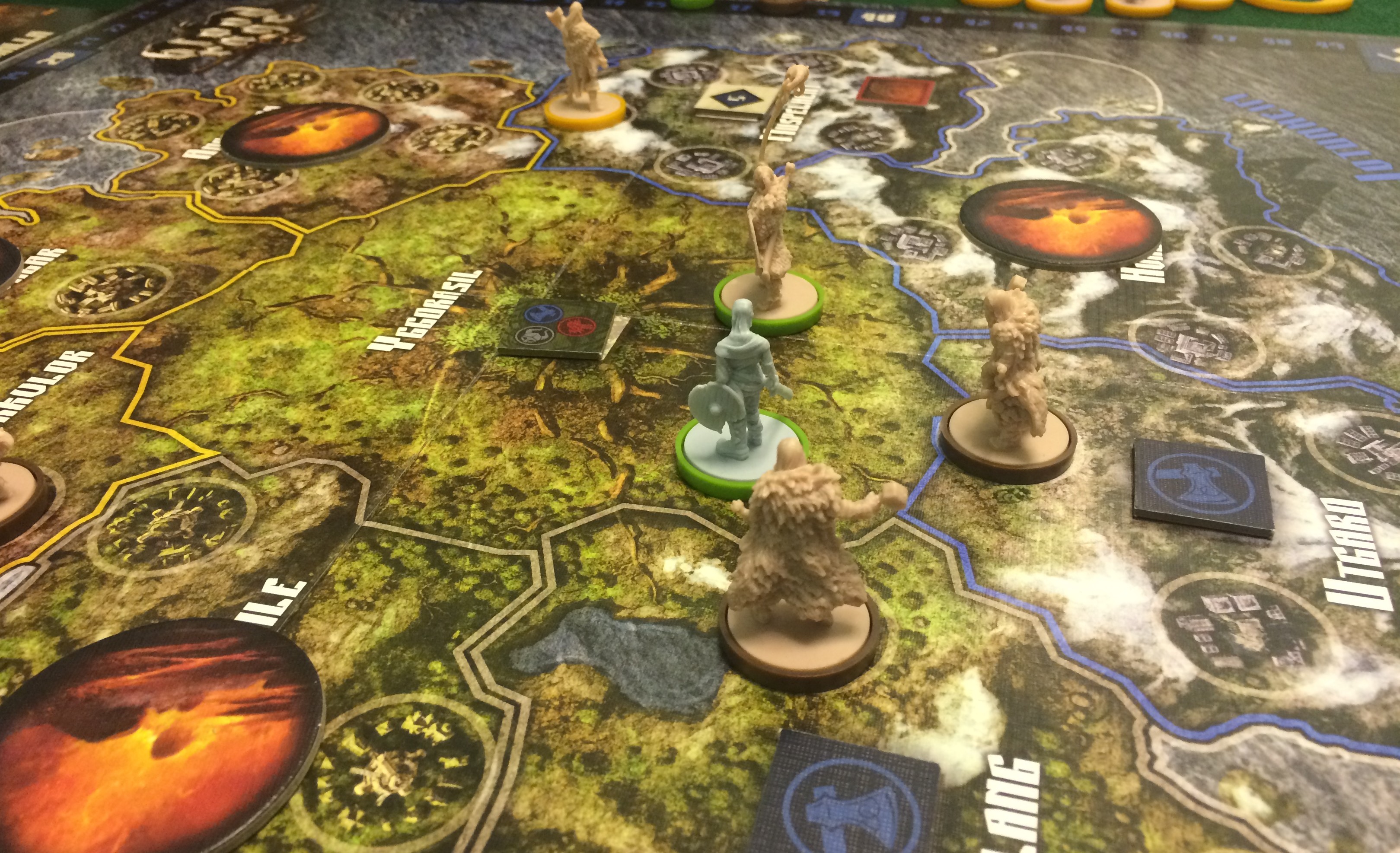 My criticisms are few and far between, a little more variety in the cards would have been nice, it’s something easily resolved with an expansion. I’m a fan of the emergent asynchronicity but a little baked in from the beginning would have added just that touch more flavour to the clans, other than the purely cosmetic. It plays well from 2 to the 4/5 and in truth at the lower numbers its a different game to the sausage fest that takes place on a board crammed with players.

Game of the year? It’s certainly one of the most enjoyable gaming experiences I’ve encountered in 2015 and one I’m keen to return to, anything that looks just so damn handsome when on the table can’t be all that bad now can it?