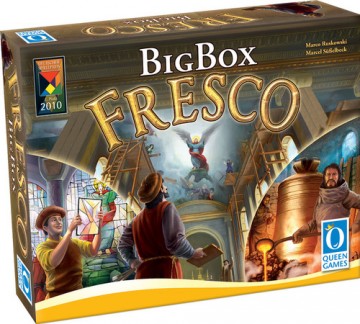 Easy to teach, quick to learn.
A unique theme and lots of colorful components.
Lots of expansions and replay-ability in one big box.

A great medium weight of worker placement for those looking to dabble their toe in these waters who don't want to have to face the D&D theme of Waterdeep.

And with the big box there are a metric tonne of components and expansions to give you plenty of reasons to come back for more.

The Renaissance, a glorious and romantic period in human history; a time over-flowing with creativity; a period which saw the production of some of the greatest works of art of all time: Michelangelo’s David and the Sistine Chapel, Leonardo Da Vinci’s Last Supper and Mona Lisa, Donatello’s Saint John The Baptist and Saint John The Evangelist, Raphael’s Deposition of Christ and Wedding of the Virgin, and of course their leader, Splinter, who… wait, that’s not right. 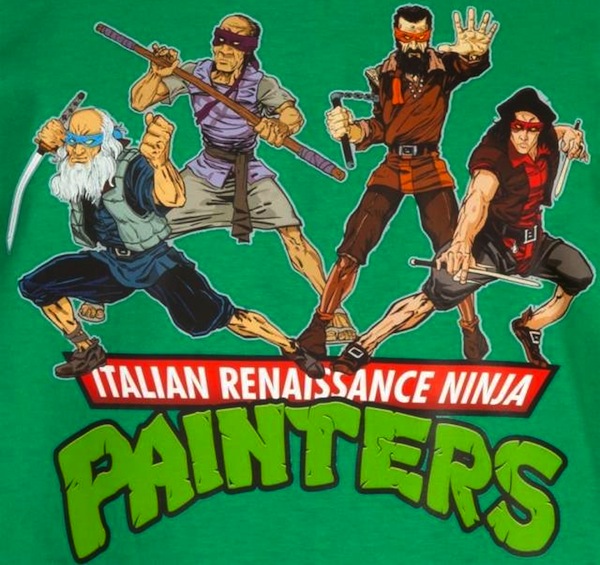 Anyway, it’s a period ripe for exploitation through a multitude of media, be it Assassin’s Creed in video games, The Borgias on TV, the Teenage Mutant Ninja Turtles in cinema, and now Fresco in the world of board games.

Well, OK, not now, exactly. Fresco is a game of German origins from Queen Games which dates back to 2010, but was recently Kickstarted in a Big Box format and that’s how I got my hands on it. It’s for 2-4 players and in its vanilla form takes around an hour to play.

The idea is that each player is a painter working on commission to paint a ‘Fresco’ on the city’s chapel ceiling and you will be rewarded with victory points for each section you paint. In order to accomplish this you must send your apprentices to do various tasks for you in a classic Euro-game set-up.

Now at this point I can sense that a lot of you are probably starting to stifle a yawn, or maybe even looking for a Luchador link to click… DON’T!! “But painting ceilings!” I hear you cry, “Really? Is this where games have gone to?” Yes, yes, settle down.

They say that the mark of a good documentary (stay with me) is that it will make you care about a subject you never knew you were interested in. See King of Kong, non-video game fans, or Senna, non-Formula One fans. Well maybe something similar can be said of board games. It can’t. But maybe it can. The game doesn’t hinge on the subject but more the balance and competitiveness. The fact that everything is themed so well is an added bonus, but what you really get, once you have waded through the rules (more on those later), is a game that is simple, intuitive, fun and fair.

See, for me, Fresco is the best Euro (worker placement) game I have come across, ahead of the likes of Lords of Waterdeep, Lewis & Clarke and Euphoria. But before we get to that, let’s go through the mechanics of the game. 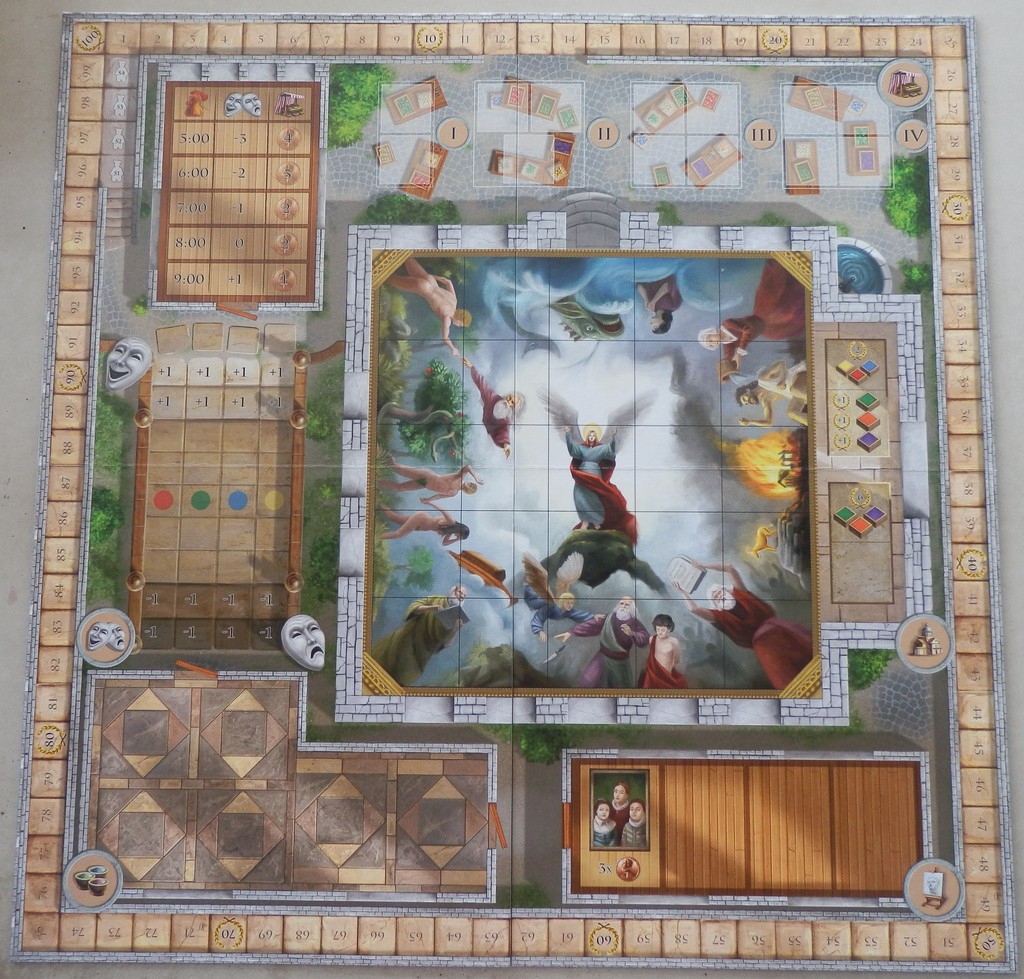 On each turn, players decide what time they want to wake up in order to determine the turn order for all future actions. The player in last place gets first choice of wake-up time and so on. The earlier you get up the unhappier you are, and happiness causes you to gain or lose apprentice meeples to do your bidding. But getting up earlier gives you first dibs on all the actions through the rest of the turn.

In the basic set-up it’s only the first 2 actions that matter, when it comes to turn order. The market is restocked with different selections of paint each day so getting in there first means you can get the pick of the best combinations on offer. It also means those paints are a bit more expensive so you can’t afford to get there too early too often. Arriving late might mean fewer paints available, but you can pick them up for much lower prices while also gaining some vital happiness. 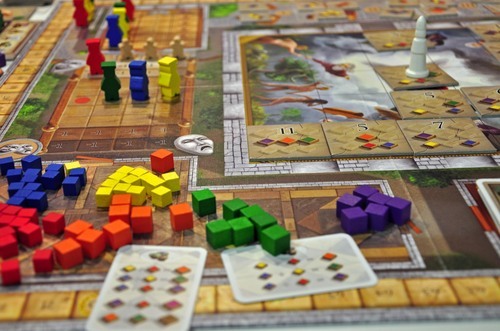 Painting a section of the chapel ceiling involves handing over some of your hard won paints to complete a section of the ceiling for some victory points. Each section requires a different combination and is worth a different number of points. Again, getting there earlier means you get to make your choice from all those available. Arriving later means someone might have taken the piece you intended to paint.

Earning money from portraits is vital, especially early on, if you want to buy paints. As you complete ceiling tiles you start to earn an income each turn so you can slowly stop your other work. 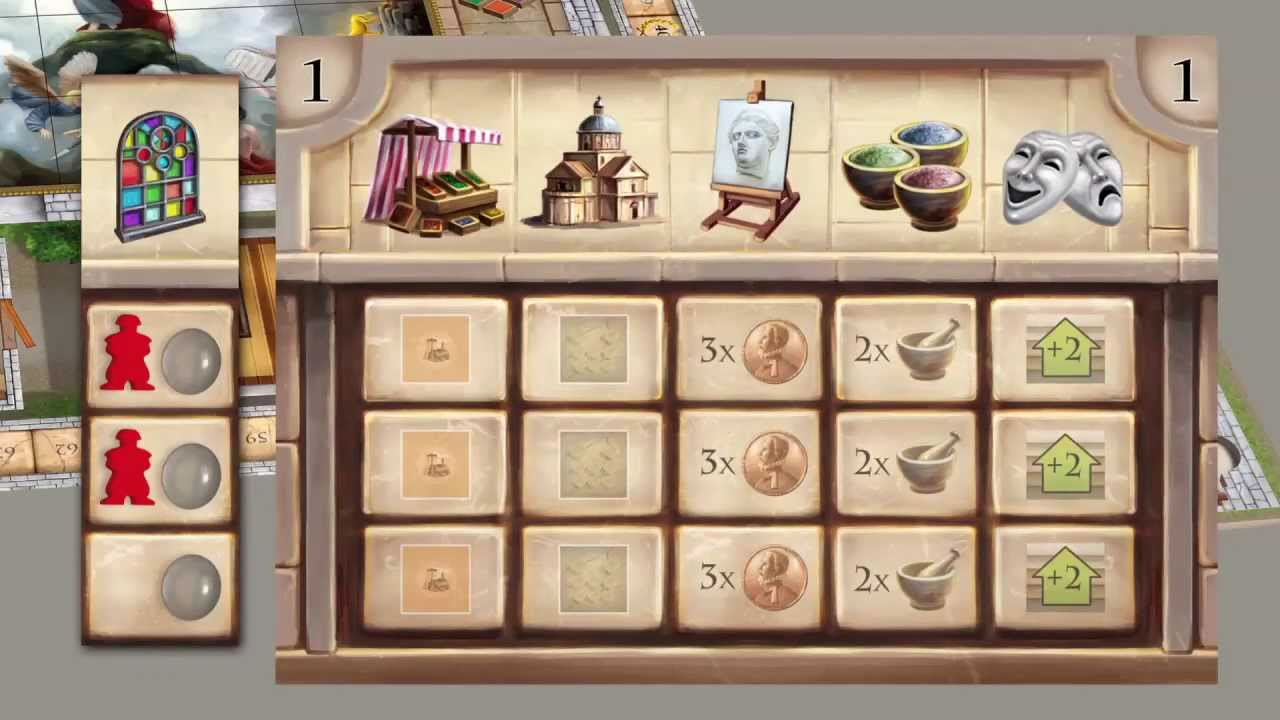 Mixing paints allows you to paint more colours. You start off with the primary colours and can mix them for green, purple and orange (an expansion that we’re coming to adds in brown and pink). Tiles with the mixed colours are worth more victory points and, as there are only 2 with just the primary colours on, mixing is also a necessity.

And finally, maintaining  happiness is vital unless you decide you don’t need one of your apprentices – a bold strategy.

The game is over when the chapel ceiling is complete and the player with the most victory points is the winner. You can earn a few extra victory points by spending your paints on painting the altar rather than the ceiling, should someone snaffle the tile you were about to place, but otherwise that’s about it (for now).

As you can see, it’s a pretty simple turn set-up, one that can be taught and learned very quickly. After that it’s all about the subtlety of tactics, which is as it should be – how early do you want to get up each day? How many meeples do you spend on portraits and the happiness when you really need to be buying and painting as much as you can?

The game is balanced in such a way that good tactics will likely win out, but you’re never totally out of the contest (unless you’re wilfully playing badly). You have 4 meeples to start and can go up to 5 or down to 3, but with 5 different actions to spend them on, every turn you have some difficult decisions to make about what to do.

Add to this the fact that each turn keeps everyone involved. There’s little downtime as each player does a mini turn in each venue (market, chapel etc), rather than someone doing all of their actions before passing on and sitting out for the next 10 minutes.

Finally, the trump card of this Big Box, what makes it big. It comes with 10 expansions (along with something which is more of a tweak than a true expansion, so 10 and a half?). These range from adding secondary wall Fresco to be painted, to adding stained glass windows, specific portraits (which give instant or ongoing bonuses) and even a doctors surgery (which adds a mechanism for apprentices to get sick and require curing before they can play a fully active role).

While it wouldn’t be recommended for anyone to throw all of these at once into a game, each one adds a different dimension and extra consideration in. They extend the length of a game by a few minutes and can make you ponder your moves a bit more, but for a smart tactician this can only be a good thing. I have to confess to not having played all of these just yet, but I’m eager to get a few more under my belt soon.

So what about negatives? I have but two, and neither of those should stop you from buying the game. The first is the rule book. I walked you through, basically, how a turn should work back there. It’s pretty simple, and once you get going you’ll be fine. However, the rulebook does not make it seem anywhere near as simple as it is. Maybe it’s a poor translation from the original German, maybe they only got people to read them who already knew how to play the game, but whatever happened, it didn’t lead to an easy first game. 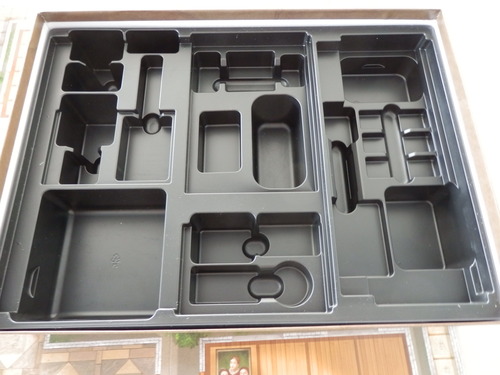 The second problem is the box. Or rather the moulded plastic inside it. The game has 11.5 sections (the game, 10 expansions and the mini expansion). The box (and manual for that matter) do little to tell you which bits are needed for which version of the game. Don’t get me wrong, once I figured out how everything fitted into the plastic insert I marvelled at how neatly everything went away. Then I tried to work out where what I needed for a game was and I got lost. In the end I threw out the insert, went through all the components and bagged them in marked ziplocs so I could find all the bits I needed much more easily.

But you know a game must be good when the only two things there are to complain about are the box and the writing in the rule book. And I am serious, I cannot pick fault with the game itself.

OK, so if you are looking for a deep game filled intrigue and back-stabbing you’re not going to find it here, but that’s like complaining that Groundhog Day isn’t the Godfather. It was never supposed to be. And just as Groundhog Day is a perfect comedy (don’t even try to dispute that), Fresco is not Battlestar Galactica or Twilight Imperium because it’s not trying to be. Fresco is a perfect hour or so of worker placement fun an d that should be celebrated.

Terra Mystica
Be the first to comment!
Leave a reply »