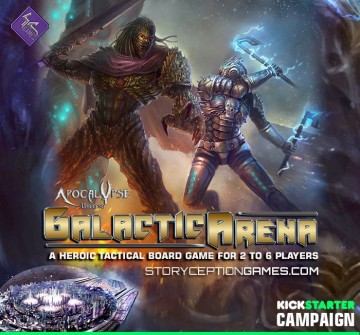 Note that this based on a pre-release version of the game and the finished components and rules may differ, but it’ll still be cool.

You remember that episode of Star Trek, the one with the Shat drop kicking the big green lizard dude and getting his shirt torn (the Gorn for those discerning trek types) if you do you’ll probably have that fight music from the episode wanging around in your noodle now as you smile to yourself. Well what has that got to do with anything you may well ask its simple, Galactic Arena from Storyception games is that episode of Trek and for full emergence into the proceedings that tune should be loudly playing on loop throughout. 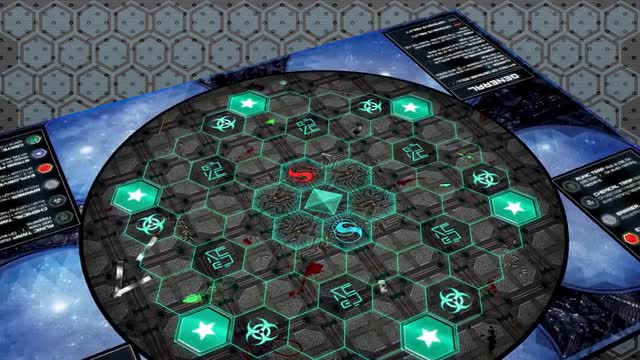 So whats this all about then, well Galactic Arena as you would suppose from its name is a game all about gladiatorial combat by various alien types in some far flung universe. Storyception have teased that further games are planned for the Apocalypse universe to expand it and to tell a grand space opera spread out across these, they’ve also hinted that game tournaments and events will effect the bigger scope of the Apocalypse universe, which is pretty cool.

Here at Who Dares Towers we were already predisposed to yum this game up as we love Spartacus from Gale Force 9 and this sounded like more of the same but with ray guns. It is in spirit but minus the fistfuls of dice (which is a shame) and without all the intrigue and back room dealings this is all about that arena face off. OK so this is a very brisk play with most games running at most to 30mins and its incredibly  simple to pick up and run with and  it can be played either mano a mano or in teams. 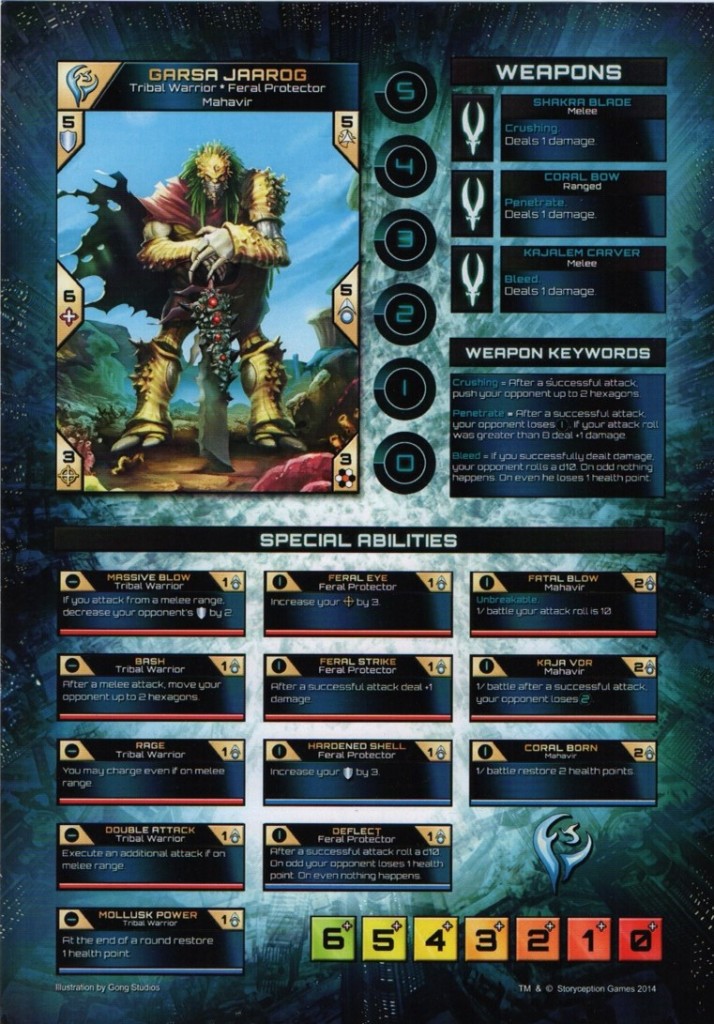 To get started each player chooses one of the ten alien races that come with the base game to be their hero, all of this is done in secret from behind a player screen and there is a reason for this. Because in a cool throw back to old school rpg video games you get to spend points on your chosen combatant to tailor them for the oncoming battle.

Each of the fighters comes with a player board that gives all the stats for the character and below that are various perks, either defensive or attacking, you can freely allocate your points to whatever of these you want your character to have, do you go for a bunch of cheap one shots or spend big and go for the powerful level 2 abilities. Absolutely love this, it adds a fantastically random spin to proceedings and a huge amount of replayability out of the box and the combinations for each fighter are boggling. Personally I’ve messed around with quite a few different builds on the fighters and whilst all had strengths there was a cost associated to those everything is really well balanced, nobody has a clear advantage over another player. And it truly does come down to how you use these abilities in the arena that will dictate who will be victorious.

So once you’ve created your fighter the screens are removed and everyone gets to see who they are up against and then the battle begins.

The fighting takes place on the arena board that is divided into hexes with the fighters starting in the center opposite each other, think of it a bit like the hunger games with a dash of Spartacus. Dotted around the arena are crates that can be pickled up and they contain mystery perks like extra health or action points that will give you an edge in the coming battle, these are well worth snatching as early as you can. And if all of that becomes a bit boring for you then you can further tweak the game by adding walls, shields and mines to the arena floor for further spice. 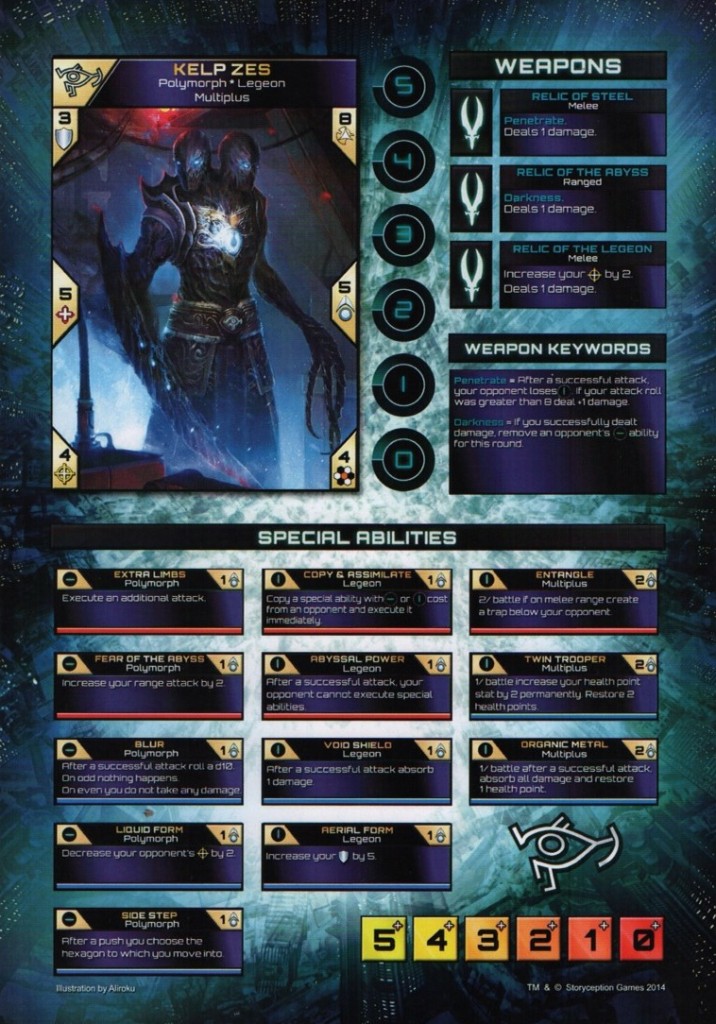 The actual game play is very easy, it plays out over combat rounds which involves each combatant getting a shot at the other and them defending, rinse and repeat. Where the real strategy and delight comes from is in those special abilities which can radically flip the game in your favor and do some serious damage to your opposition. There is also a whole other game taking place as well, as all your actions be them attack or defense are dictated by spending action points, when you run out you can’t attack, move or defend, if you should find yourself in the unfortunate position of an opponent still having unspent points then you’ll about to have a really bad afternoon, you see a combat turn doesn’t end until both opponents have run out of points. And as some of the more powerful abilities of the fighters allow you to knock points off an opponent you can see where there is a much deeper strategy than just running around an arena and hitting each other with big sticks. Some fights we had really came down to the wire and were always very close usually ending with a desperate grapple up close and personal.

Another skill is using the arena to attack your opponent, melee attacks will allow you to push opponents away onto to traps and some of the weapons and perks also allow you to take control of your enemy and run them into obstacles.

And that really is it. Due to the nature of the game there are huge possibilities of different arena terrain or weapons that could be easily added or switched out and I’d welcome more shiny goodness in those areas. For a first game this is a polished and solid effort with some excellent art and simple yet elegant design, and I can’t wait to see what other goodies Storyception have waiting in the wings. 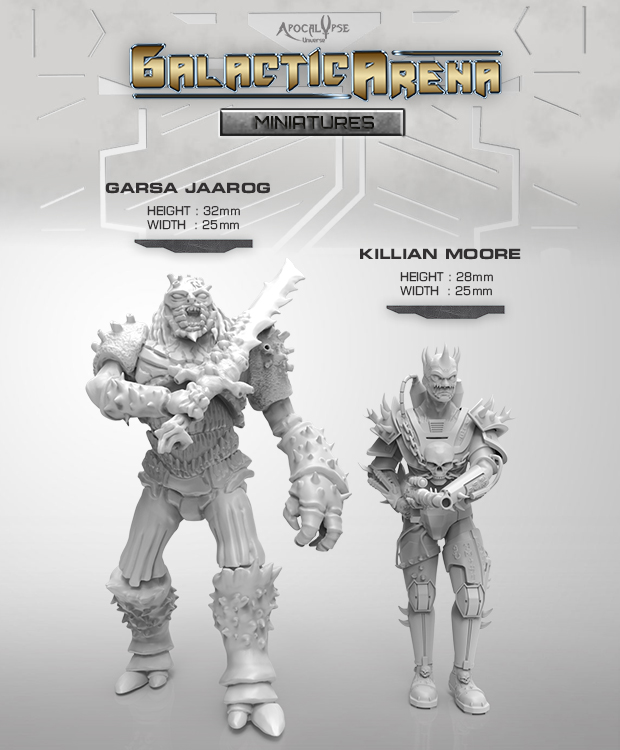 If I had to be critical the elephant in the room is the lack of miniatures, this is a game that is just screaming to come with a set of cool mini’s with it. I understand that cost’s play a part in this and an expansion is coming with them for all the base set characters should it fund (which it has) but I have to think if this had launched with a full set or a stretch goal to nab them, this could go through the roof.

It would have also been cool to have had the wager’s from Blood & Sand included, maybe an expansion could be added that will allow more of that sort of flavor, its not a deal breaker we just like gambling on things.

So if any of that appeals to you, and I can’t see why it shouldn’t then you can still get in on the project now by backing it on Kickstarter HERE

We’ve really enjoyed our first venture into the Apocalypse universe and with a game of galactic conquest waiting in the wings color us interested.