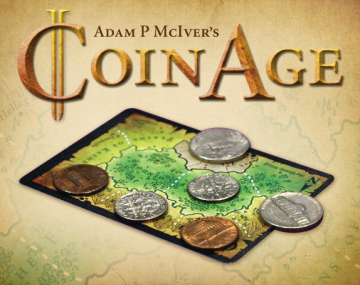 Portable you can carry it in your wallet.
You feel instantly cooler just having this about your person.

If you want to play it might mean sacrificing a trip to the vending machine... Coffee, Game..hmmm.

A neat simple but deceptively clever little game. Don't leave home without it. 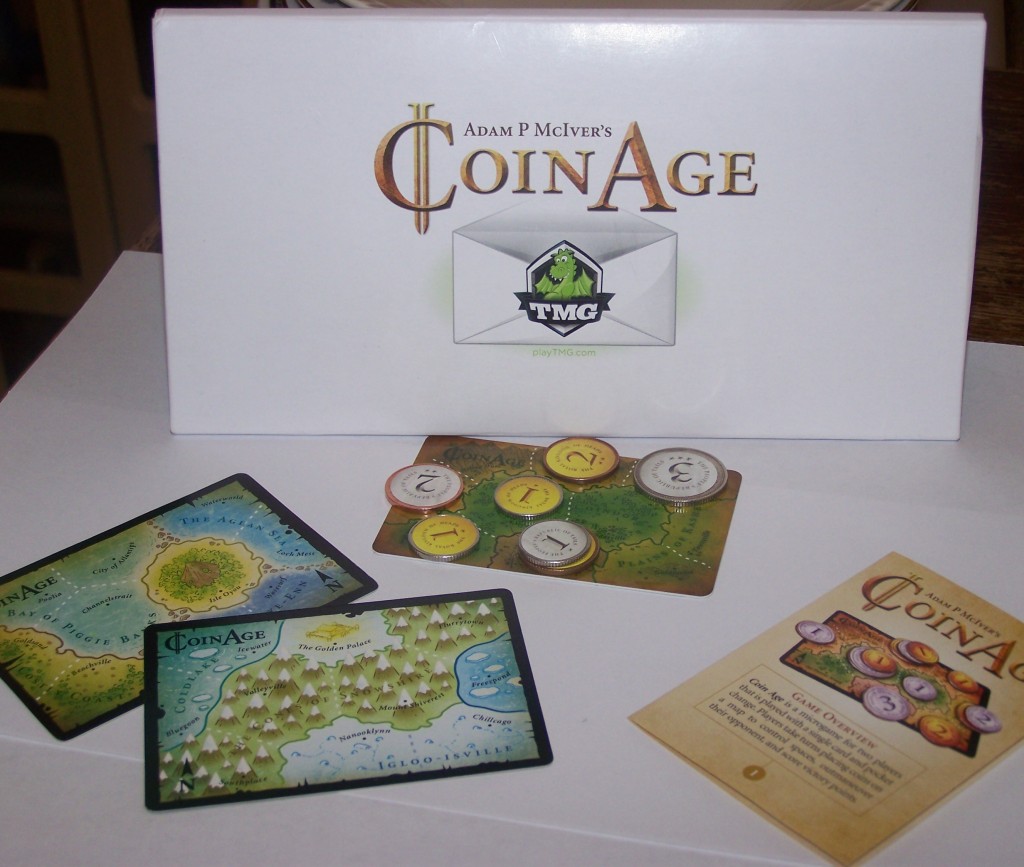 Kickstarter has given us a great many things Video Games, Comics, Potato salad! One area it has thrived is board games and more specifically the micro game has flourished in these mysterious seas, just cast a net into the turbulent kickstarter waters and you’re sure to drag up a net bulging with promise. Coin Age was a huge hit on Kickstarter funding at over $65,000 with a pay what you want campaign and following a few distribution wobbles its finally landed on shore. But is it something to proudly mount over your mantle or one of those that got away.

I find micro games a handy fallback for pre or post game nights, occasional pub gatherings and to be enjoyed for what they are, diluted gaming goodness in bite size nibbles. I originally proposed doing a clever one word review for Coin Age in honor of its micro game aspirations, but aside from a gimmick it wouldn’t allow me the time to say what makes this game so great.

Coin Age truly embraces the micro-game mantra from the components up, it consists of just one card and a pocket of loose change, that idea alone is lightning in the bottle levels of inspiration it encourages you to take a second look, is it just a gimmick or does it manage to pull off the tricky proposition of actually including some game in there, and to answer that yes it does. The design slinks in and germinates in a cool area of the brain the place that is usually absorbed with flat screen TV’s and Apple products. It captures what makes great games so great, its not just the beautiful artwork or clever mechanisms its more basic and primal than that, its the tactile nature of games, of being able to fiddle and play with components and Coin Age’s designer Adam P McIver gets this, coins are a lovely thing to handle, they make a great noise and have weight and heft when you flip or spin them and make for a satisfying noise when slapped on a table. To make them the components was a masterstroke.

It also hits at the gadgety cool level, who doesn’t want to sit in a bar and say to a fellow beside you fancy a game and then produce a simple card from your wallet and empty your change onto the counter while they watch with perplexed interest. Its a brilliant and smart design tuned into what is just cool.

So the game then, which is deceptively easy to teach but has surprisingly deeper levels than it has any right to have.You start with your map which is divided into territory and zones and the object is to have the most control of these areas when either a player runs out of coins to put on the map or all of the map is full.

Each player starts with the same denomination of 10 coins ranked from 1 to 4. With the flip of a coin its decided who will be playing as the empire of the Heads or those terrible despots the kingdom of Tails and then we’re off . On a players turn they take one of each coin type from their pool and slaps them onto the table, any coin showing their side can be used and depending on how many will be decide what actions they have. Four coins up allows them to place two or pay one to their opponent and place three, placed coins can either go in a free zone or on top of any coin with a higher denomination. Three or Two successes and they can place two, one and they can place one and move a stack and finally if they come up empty then they can capture a coin from the map and move a stack. Simple stuff but it all adds up to a deceptively deep little strategic game of tic tac toe. With the move or capture rules allowing you to take your own coins back as well as an opponents, each move has to be carefully calculated. And it becomes clear that the smallest coins hold the most power over the board allowing you to shut out zones with your opponent unable to place anything on them, their only hope to gain the capture option to right the balance.

The victory points at a game end are given for the value of the coin controlling each territory for that player and if they have majority control in a region those values are doubled. So then those small low value coins we were using to control regions and so smug about have suddenly cost us the war as they don’t pay out at the game end. There really is a lot going on for something that at first glance seems so simple. 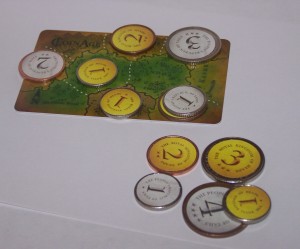 Tasty Minstrel Games did themselves proud with this product besides the two different double sided cards offered in the game we also get a plastic credit card version of the main board, they also supplied a set of card coin tokens for using if you don’t have the change to hand and best of all a set of stickers to sticker up your local currency to make it easier to identify the different coins and in all honesty is really the way to go, to truly embrace and capture the essence of this game.

Frankly this is ludicrous that I’ve written this many words on a game that consists of 1 card and loose change, but then that tells you more about the cleverness of this game than anything that I can write. This comes highly recommended if for nothing else than the coolness of just owning this, the fact its such a clever little game is a huge bonus.

Check it out for yourself with the PnP