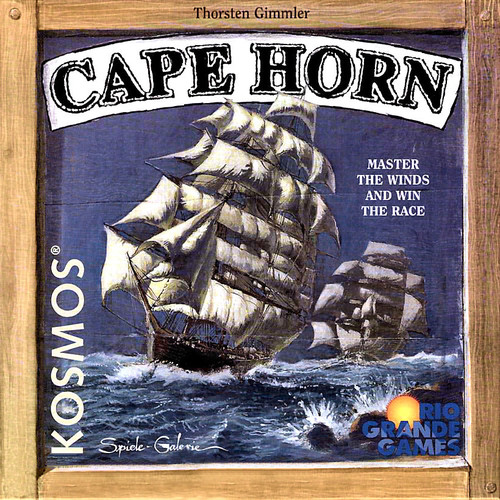 Adam is all at sea with Cape Horn. Yep he’s been in the bargain bin again..

Everyone knows I love both a bargain. Moreover, I love an obscure game that I can pick up at a bargain price and hopefully get a good bit of play out of. Having been previously rewarded with games like GOSU and Madam Ching, I am quite happy to carry on with my bargain hunting. Which led me to Cape Horn.

For those of you whose interests do not stretch to the geographical or the nautical, Cape Horn is the headland around the southern part of South America. Prior to the construction of the Panama Canal, it was the route for ships to travel between the Atlantic and Pacific oceans. Furthermore, it was an incredibly dangerous route, where fierce currents, vicious storms and icebergs could cause serious troubles for ships attempting this navigation.

Naturally, the game casts you as captain of a sailing ship attempting this crossing and racing your opponents to be the first to do so.

Upon opening the box, you are presented with a nice looking board illustrated in the style of a sailing chart from the time. You also get treated to some wooden boat shaped meeples, which I really rather like. The individual player boards (log book in game), which provide you with a summary of a player’s turn and keep note of your sail points (more on these later) looks nice. The presentation is, however, let down by the wind tiles, which makes up such a large component of the game. There printed with a plain blue background and the reverse side with the directional arrows and numbers that seem to jar with the rest of the presentation. It does mean that there is clarity to the tile’s instructions, but I cannot help but feel that a bit more effort could have been put in here to carry the feel from the rest of the game onto this. 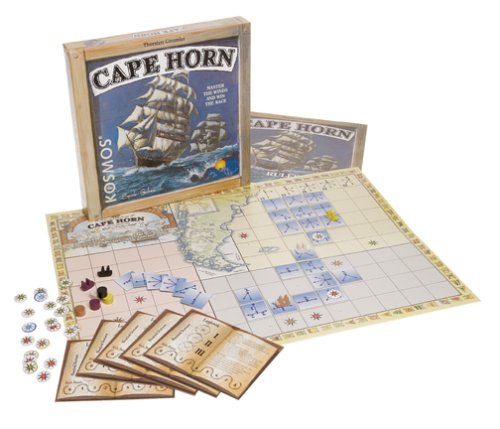 Beyond the presentation, the game play is fairly simple. The objective is to be the first player to visit either three nautical stations on the map or to visit two and cross the finish line on the western side of the Cape. The map is split into three zones with three nautical stations within each. The stations are different colours. Once you have visited a nautical station of one colour, you cannot visit another station of the same colour (ie. having scored the red station in zone one, I can only count my second station by visiting the yellow or green station in zone two).

A player received 4 wind tiles at the start of each game, which is kept secret from other players. Each wind tile, as previously mentioned, has arrows printed on them indicating the direction and a speed that it will allow a ship to travel. At the start of each turn, a player adds a sail point to their total (I promise you – the explanation is coming) after which they can place as many wind tiles as they like upon the board. A tile can be placed upon any empty square on the board, as long as it is next to a previously placed tile. Furthermore, old tiles can be covered up by new ones; provided any ship cannot reach that tile with its next move or the tile is not currently under a ship. Doing so also means that the player can only play one tile that turn.

When moving your ship, you must move it in one of the directions and the speed permitted by the wind tile you are currently sat upon. Some tiles do not give you an option, but where there may be two or more options, you are the captain get to decide where to go. If you move ends you on a nautical station, you take a token of that colour to add to your log book. Finally, you draw a single wind tile end your turn.

The sail points as mentioned earlier come into play during the movement and draw phase. A player can only have a maximum of 8 at any one time. You can gain an extra point by keeping your ship still for a turn. Spending 3 points allows a captain to ignore the wind instructions and move their ship one square in any direction. The expenditure of 5 points gives the captain a second move. Finally, any number of points can be spent at the end of the turn to draw a corresponding number of additional wind tiles.

Use of sail points is crucial to how you win the game and adds an additional layer of strategy and complexity to what is at heart a fairly simple racing game. The player who is able to carefully marshal their sail points for a sudden burst of speed or unexpected maneuverer at the right time is often going to put themselves in the right place for that final push.

Being able to put down as many tiles as you like also help ensure that there is very rarely such thing a bad tile that is stinking up your hand for long periods of time. You can use them in trains to ensure your tiles are placed where you want them or put them into places that can provide opposing captains with a challenge they have to carefully navigate around – burning up some of those precious sail points in the process. It’s nice to know that your tiles are not going to constrain you for turn after turn, with an ability to bring many more back into your hand. 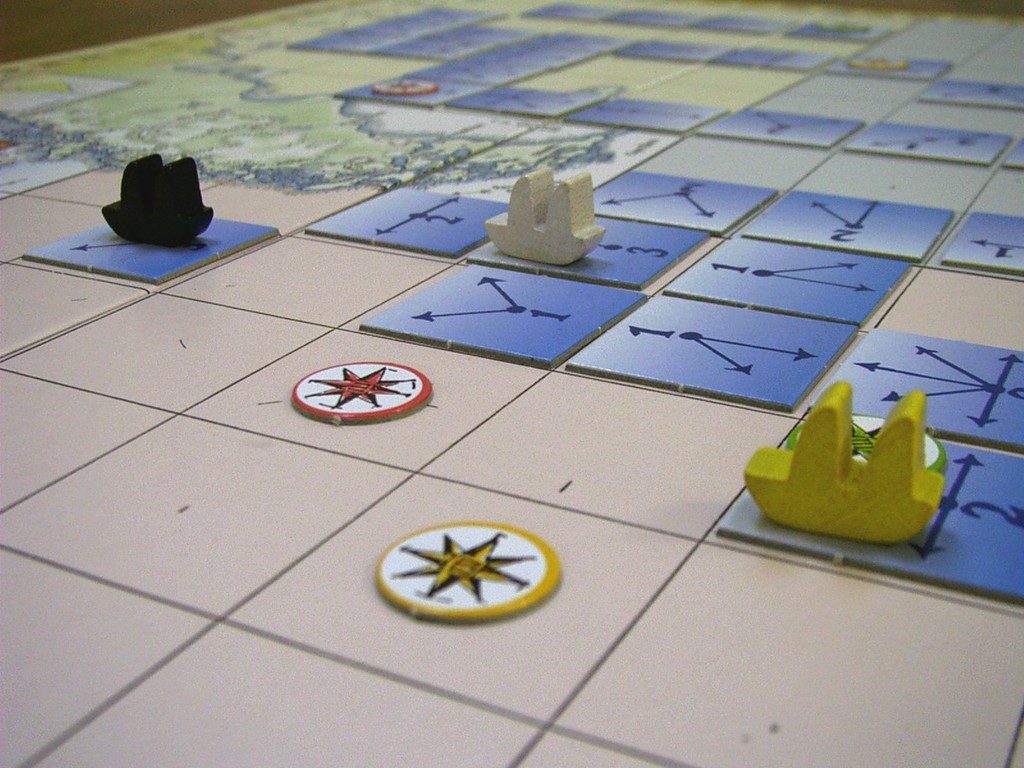 However, this is not a game without its flaws and there are some fairly substantial ones that stand out to me. Firstly, the nautical stations seem to be an utterly arbitrary deus ex machina that are never explained as to why they are crucial points in the journey around the Cape. It seems odd to me that a captain close to reaching the finishing line can suddenly lose because someone else went to three different places in the sea. It strikes of bad design and an artificial way to limit the sprint to the finish that the game would otherwise be without any explanation as to why.

This leads me onto another problem I have found with the game, that there is no build to the end game. What should be a ramping up in tension that is the way a racing game should be, often just peters out. The games I have played of Cape Horn have either ended with a sudden out of the blue victory that no one saw coming; or with someone who two or three turns away from the end obviously going to win and nothing that the rest can do to prevent it. This may just be my experience, but when there is repeatedly no nail biting finish, that cannot just be coincidence.

I don’t feel that the game reflects the theme particularly well. The Cape Horn is supposed to be a perilous place for these brave seafarers. The worse that can happen here is that you get blown slightly off course or you have to remain becalmed for a turn or two. I understand that the game wouldn’t work with player elimination, but this just doesn’t sell how brave and adventurous these captains would have ultimately been.

Lastly, it’s clear to me that the game has a very limited shelf life – that is to say the gameplay gets quite bland and a bit samey after a while. The turns just don’t have as much variation to them and you get the sensation of going through the motions, which really kills the game for me. Perhaps a bit more ‘take that’ style game play and a way to screw with your opponents would liven it up a bit more, but I’ve now got to the point that I’d rather not play this game anymore.

For a cheap game, I’ve probably got my money’s worth out of it. But now it just sits on my gaming shelf looking a little forlorn. There is a decent simple racing game at its heart, but don’t expect anything long term out of it. Especially if you want a tile laying nautical themed movement game, there is Tsuro of the Seas. And unfortunately for Cape Horn, my family would rather play that every time.