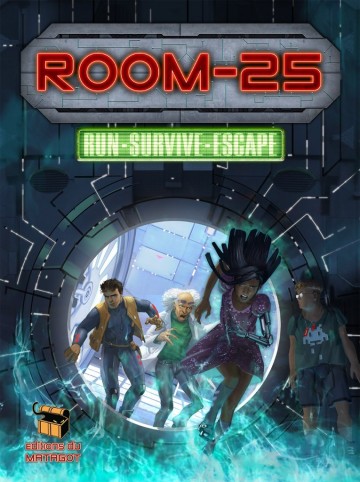 Its a light and easily taught game.
Will appeal to both experienced and non-gamer's.
Unique theme.

A vanilla experience and you feel whilst playing that all the good stuff that the expansion contains is sorely lacking from this box.
To really get the full enjoyment out of this title you need to be aware that your going to want to buy that expansion.
Player elimination.

This a fun little game and with the right group has the opportunity to be a quick potentially vicious and entertaining bit of hokum. This enjoyment is marred by the base games shortfalls and the knowledge that your going to have to fork out more cash for that expansion to get the rest of the game that should have been in this box.

This is one that had been on my radar since its release and finally I managed to get a play in at the recent UK Games EXPO courtesy of Geraint one half of Going Half On Games, we assembled a rabble of detritus from the UK’s gaming media folks consisting of Nate & Ben from Board Game Hour and The Cardboard Cartographer as well as my good self and we gave it a spin. It was quite the giggle and I took the dive and ordered myself a copy on my return. 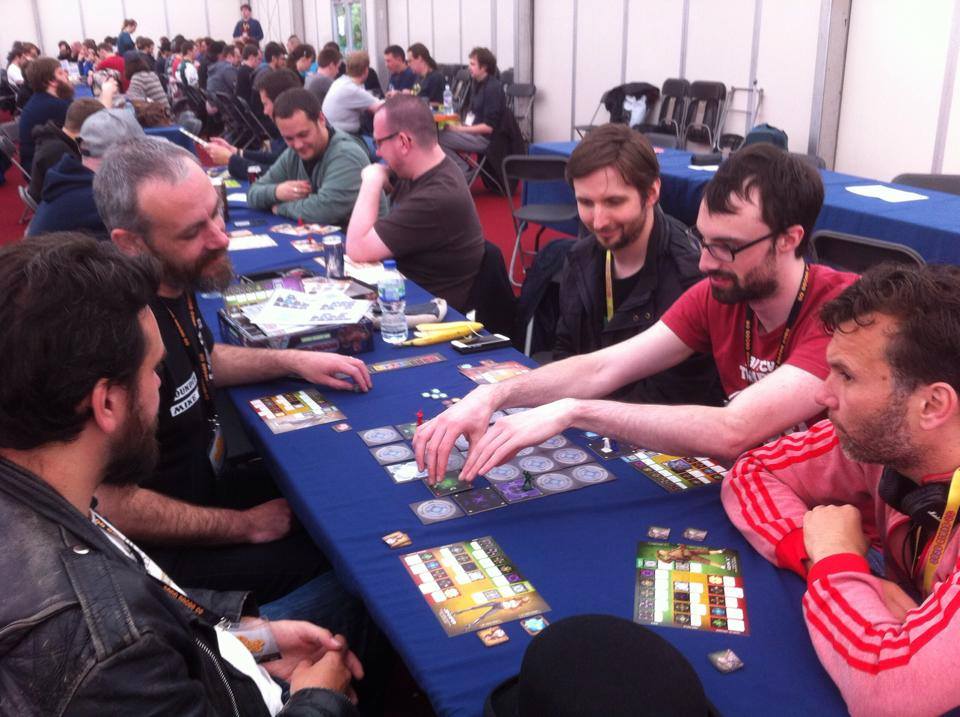 Room 25 takes its cue from Cube a low budget Canadian sci-fi horror flick from the 90’s, its set up involved a bunch of strangers waking in a strange complex and soon discovering that all the interconnecting rooms contain hidden traps designed to kill them in violently unpleasant ways. Its a great set up unfortunately the film never quite monopolizes on the initial idea lucky for us Room 25 sensibly focuses on the films unique premise and runs with it.

All players start in a central room of a grid of 5X5 rooms all represented by randomized tiles that are flipped over obscuring what they contain, the goal of the game is to find the exit room which is hidden somewhere along the perimeter of the board. Now the game can be played two ways either as a straight co-op which is a mildly enjoyable puzzle or with the addition of hidden traitors (guards) sneaking among the desperate survivors which is frankly the only way to play this.

The base game is incredibly rules light and could easily be utilized as a great gateway game with only four actions to be learnt by players its explanation and set up runs into a handful of minutes. Each round players secretly program two of their available four actions and then on their turn one is uncovered and taken and play then continues around the table until it returns to them and they play their second, what are these actions well:

Move – pretty self explanatory when uncovering this action the player must move to a adjacent room, either uncovered or hidden, obviously hidden tiles could potentially be very bad for them, so its very good they have another action which is.

Peek – Yep it is what it says, players get to act like some leery uncle and secretly peek at an adjacent hidden tile, they are encouraged to give a vague idea of that rooms contents to the rest of the players. Now obviously here’s the fun bit if there are any guards mixed into the group who’s to say what they telling you is the truth.

Slide – This action allows that player to slide a row/column of tiles (excluding the middle row/column) along, the tile that is pushed out the end of the facility then joins onto the front of the moved row. This essentially allows you to move troublesome rooms out of the mix or for any traitorous types to mess with the other players by moving say the exit out of reach. Which leads us to the final and potentially most fun action.

Push – If a player is in a room with another player and they uncover this action then they get to push that player into a neighboring room, now this can obviously be used to assist in moving about the complex faster which is fine, but its much better option and one that will cause the most cries of outrage at the table is when one of the guards shoves an innocent victim into one of the murder rooms.

There is a ticking clock element element to proceedings which slowly counts down to zero and the players need to have found the exit and escaped before it runs out, it also rotates out who will be first player each round meaning players will need to be discussing their plans to avoid any accidents! 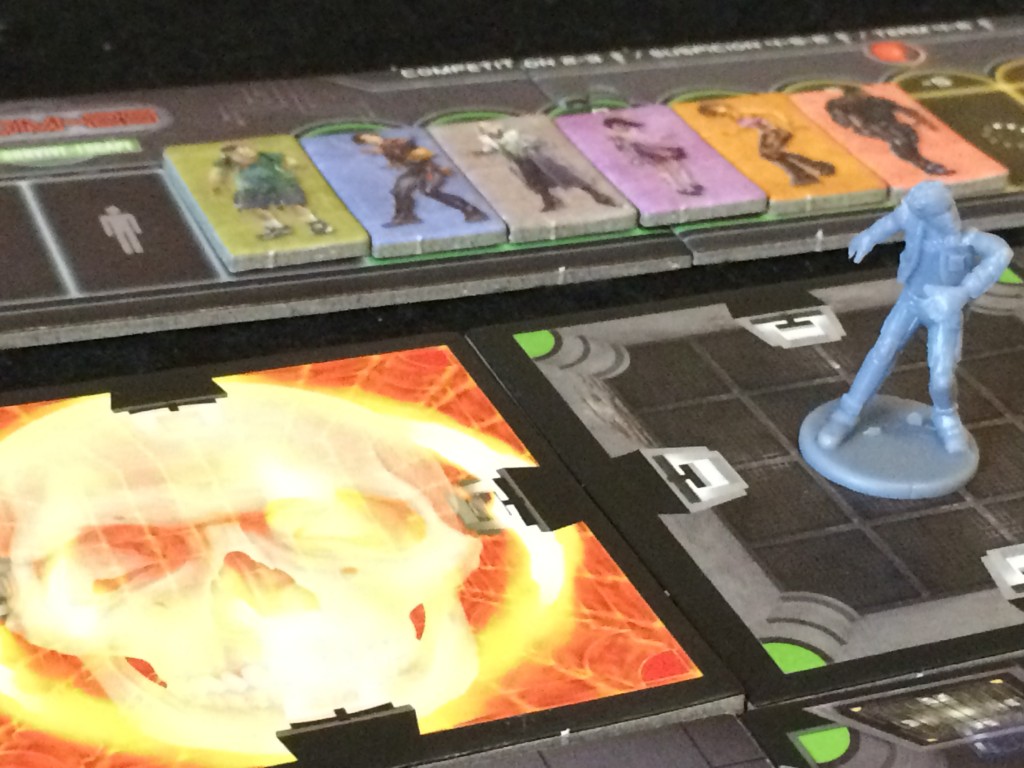 Whilst the game does come with the two different modes of play, it really only shines when played with the betrayal option. Personally I’ve only ever used the co-op to teach the game, and if its a group of experienced gamer’s then there really is no need, played straight as just a co-op sucks all the malicious fun that’s to be had with possibility of the guards snooping around and the prickly realization that sooner or later somebody is going to come to an unpleasant end.

Playing with the guards in the mix is a whole new world, there is still the possibility of there not being a traitor in the four player game but above that there will be at least one, the delicious fun of this is that the guards don’t know who might be a comrade so there is a strong possibility that they may well off each other in their enthusiasm before being uncovered. Once its become clear who cannot be trusted the guards still get to play but now their actions are no longer pre-programmed allowing them to choose which of the actions they take when it comes around to them, it gives them a slight advantage they’ll need as the other players are going to distance themselves pretty quickly from them, its still fun but the real joy of being the traitor in this game is the power move push action at an unexpected moment sending an unwitting contestant into a room of certain death.

And as were discussing rooms that’s take a look at some of the special treats our contestants can expect tonight. 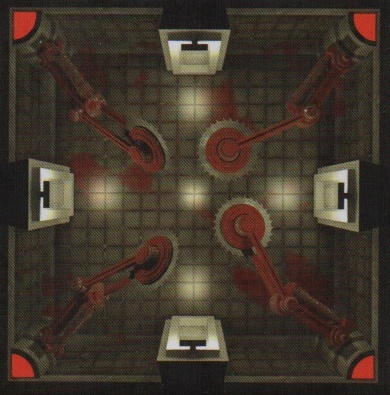 Behind door no.1 we have The Trap Chamber, ah yes a home audience favorite this little room full of swirling dicing and slicing mischief is triggered upon entry if the unlucky soul doesn’t exit with their next action then they are sushi. 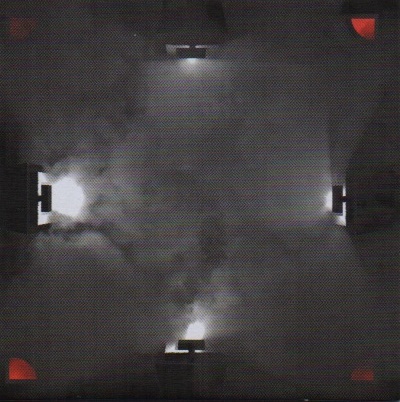 Behind door No.2 The Illusion Chamber. Hows your luck tonight lets roll those dice and hope you don’t come up snake eyes. Upon entry this room takes the form of a random uncovered room, will it be naughty or nice. 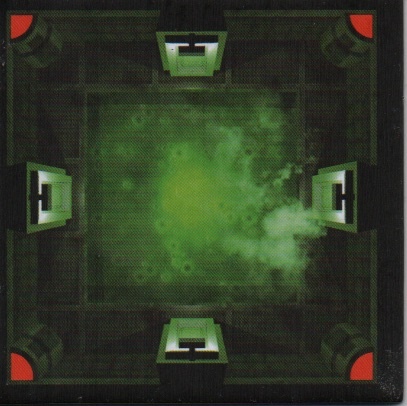 Behind door No.3 The Acid Bath – Ah yes this sneaky little beast is safe to enter but due to space limitations anyone charging in after you is going to push you into that large vat of flesh dissolving acid so be careful out there folks because we wouldn’t want any nasty accidents to occur. 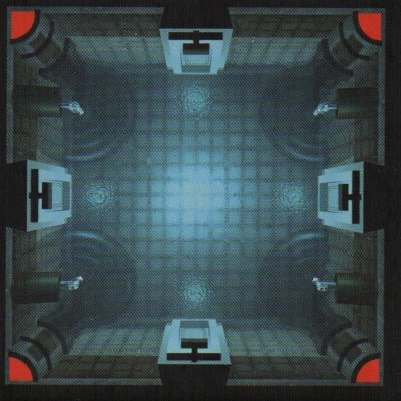 Behind Door No.4 The Flooded Chamber. How do you fancy getting sealed in here as it slowly fills with the finest mountain spring water (as supplied by our  sponsor Cracked Back Mountain Refreshments), you get until the second action of your next turn to get out or your be sleeping with the fishes. As a clever safety feature this rooms seals itself shut to avoid any further accidents and its contains are fully recyclable. 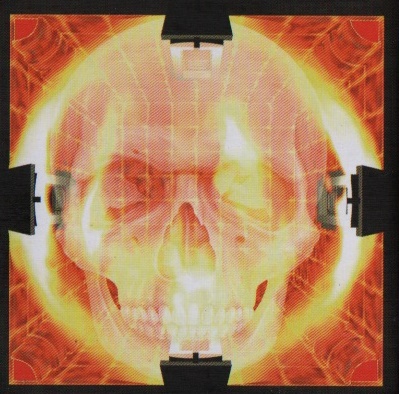 And finally behind Door No.5 My personal favorite, The Mortal Chamber! Come on down! we’re frying tonight! Guaranteed to ruin any contestants day unless their wearing factor 5,000 sun block as they are super heated faster than a ready meal in a turbo oven and instantly (and painlessly?) incinerated.

Now not all the rooms will kill you straight away, some will maim you first then kill you and a few are just dull plain old rooms, others will teleport you, trap you, freeze you or plunge you into darkness! There’s a delightfully mixed bag of mischief here and with the randomized set up no game ever plays out the same.

So lets get critical for a moment shall we? The components as a whole are solid the room tiles are a good grade of board and the art itself is fine if a little sterile and lacking in character and I did notice on my set some slight color issues with the backs, not ideal with a game containing hidden information but as it was a fairly even split across the tiles it hasn’t hampered the enjoyment immensely. The miniatures are OK but with all the same grey plastic it can be awkward to distinguish them apart (this issue is resolved with the expansion where each figure is now colored). Game play is where this version falls short of greatness why the different player powers were not included as part of the base game is a major oversight, yep its corrected with the expansion but really it’s a feature that should have been in this box. And whilst we are on the characters I know there has been some outcry on the naming on one in particular “The Bimbo” is an unfortunate choice for one of the only two female characters I understand they are supposed to represent stereotypes but still bit of a home goal. 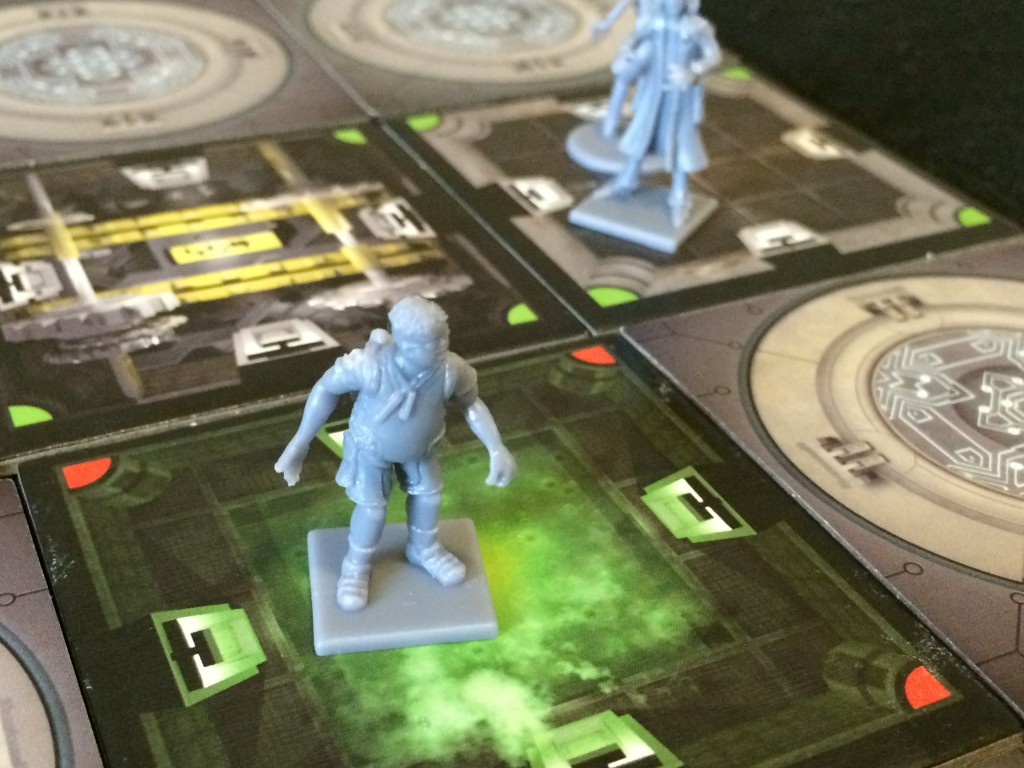 OK who pushed the nerd into the Acid Bath?

It sounds like i’m ragging on this As the game stands its an entertaining and rules light experience that can be got to the table with minimal trauma and it has some interesting ideas and with the right mix can be a hoot with the right group. A possible downside you should be aware of is player elimination which as most games run to at best 30 mins isn’t a disaster unless off course your on round two of a game and Bob pushes Ben into a Mortal chamber with no other reason then he was sure Ben had threatened him in the earlier round (cue some pouting and sulking).

So final thoughts the retail price on this is around £20 and if you can grab a copy for that then its a fine deal, its a entertaining little filler that doesn’t outstay its welcome. The only misgiving is that if you’re looking for more meat on its bones the base game as it stands can feel a tad soulless. The expansion appears to fix a great many of the base games shortfalls, its then down to if you are prepared to outlay for that when it becomes available again and whether the extra expense will be justified.  Once its available I’ll be snagging a copy to try out and give my opinion, for the time being I can give this a reserved round of audience applause.