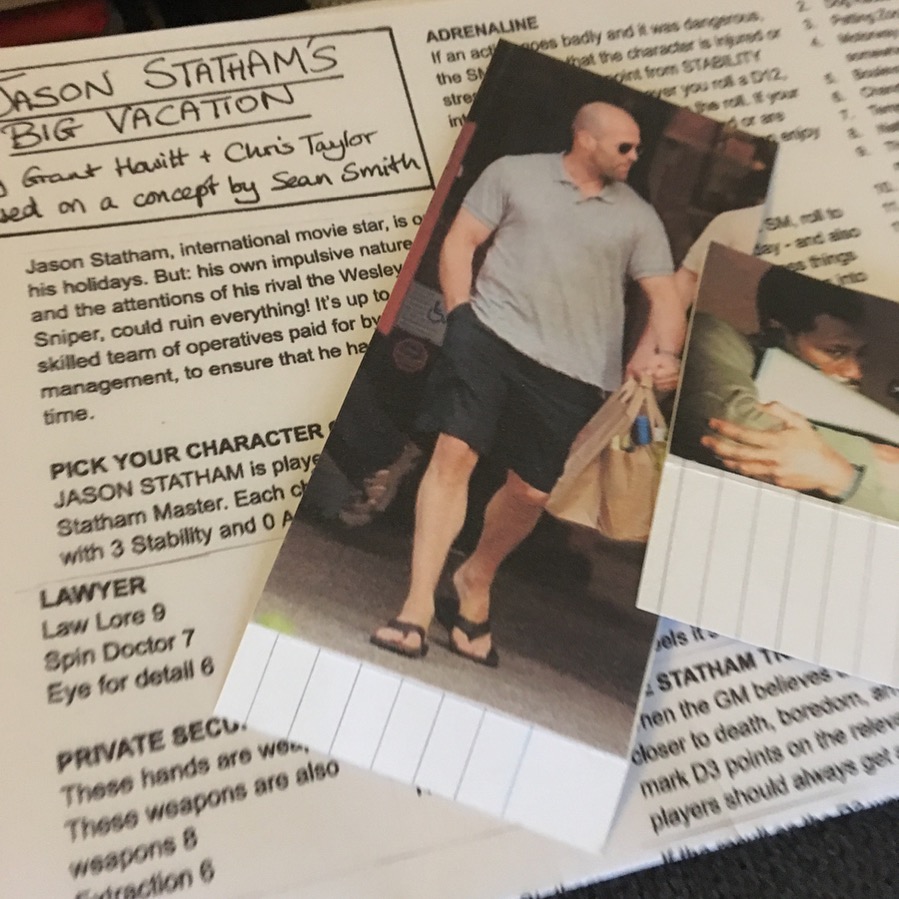 At Who Dares Rolls we’ve already praised Grant Howitt’s strange brain and wonderful games. He releases one-page RPGs each month at his Patreon, including Honey Heist which we’ve previously covered.
Recently Grant and his co-conspirator, Chris, recorded an episode of their Hearty Dice Friends ‘advice’ podcast where they took names of games from their audience and turned them into RPGs. It was decided that the best entry would become a one-page RPG.
The episode’s here and has some great ideas for RPGs. The winner (spoilers!) was Jason Statham’s Big Vacation.

The pair then went on to record the game design session in a bonus podcast found here. It’s fascinating seeing how the gears work and how many ideas get thrown at the wall until they stick. Even so things get tweaked afterwards, but hearing the pair crack up while figuring out how to make a game work. This is probably not a great way to build a big-sized game, but for a short game like this, it’s perfect.

The game was released on Rowan, Rook & Decard, along with a general hope that Jason Statham isn’t a litigious man.

I love the idea that we saw this game being built in real time on a couple of podcasts, then could play it shortly after.

But does the game work? Is it going to be any good? I decided to run it as a palate-cleanser after a lengthy campaign.

I’m hoping you all read the rules of the game given it’s linked to up there, it’s free and it’s one page. Still, in case you didn’t, the pitch is basically that you are people trying to make sure that Jason Statham has a really nice holiday. Jason’s whims and the Wesley Sniper’s machinations threaten to leave the actor sad, bored, arrested or dead.

Lee took the role of the tour guide, Pablo.
Vinnie decided to be Steve Buscemi, who had a career change in order to be Jason Statham’s lawyer.
Mark played Jason’s private security, Wilkins, who was also his driver… or was it… his Transporter.

The game played out through four scenes, each of which might lead to Jason having a bad time if they went wrong. 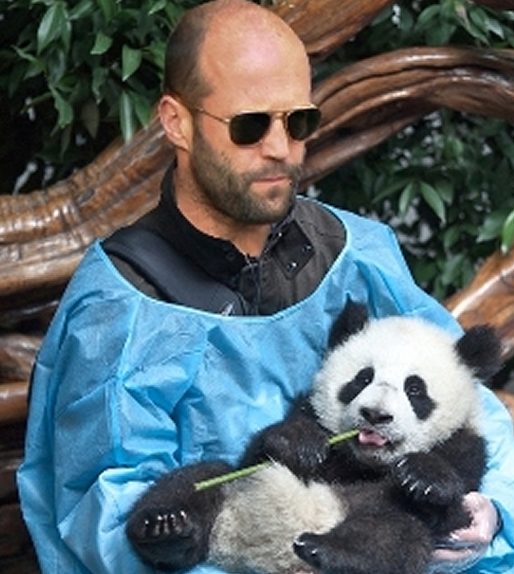 Jason was on his third cappuccino of the morning, reading the script for a Hudson Hawk remake, when Pablo showed up with a falling apart van. He’d gone independent from his family business with neither the resources or skill for the job. Steve wanted to find a better guide but Jason insisted this was the right person.
In the background, some of the tourists were acting strangely. Each of them wore hats and in the sweltering Barbados sun, their hairy bodies looked uncomfortable. Too late, the group realised the Wesley Sniper had hidden a mob of bears in ill-fitting hats, having given them pamphlets with crude pictures explaining, “Statham = Honey”.
The group bundled Jason into Pablo’s van and exited, pursued by bears. They drove through the fish market (also the red light district) and Jason jumped out to start kicking over market stalls, looking for women. Wilkins dispatched the bears using his ‘my hands are weapons’ and ‘my weapons are also weapons’. The group stowed the bears and Pablo tried to take Jason to the next location.
“I wanna see a temple,” he said.

I’d selected ‘dead’ as the main risk for Jason in the first scene. This time ‘sad’ was going to be the primary risk. He started by tearing up at the solemn beauty of the church atop a mountain.
The group tried to find a pretty tourist for Jason but had to settle on getting him up a bell tower to check out the cool view. Jason saw someone in a courtyard down below and started parkour in towards her. It was a sexy lady Statham dressed as a nun. She’d been sent by Wesley Sniper in order to beguile and confuse Jason.
The group mainly fell after him, each failing rolls to get down there first. Some other attack nuns showed up and were dispatched by the cunning use of a strict priest who didn’t care for their many weapons. Wilkins threw the Sexy Lady Nun Statham through a window and Steve Buscemi explained that there was a legal precedent for nun-flinging.
They tried to leave with Jason but the Sexy Lady Nun Statham chased them down in a van. Jason acted unpredictably, jumping on the van and trying to bite it open. The van toppled off the mountain and somehow Jason survived. 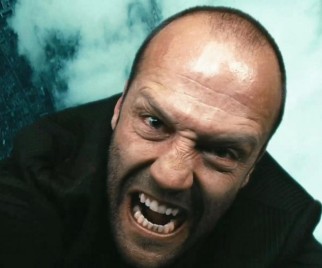 The group decided to take Jason for a burger in the fast food place next to the chandelier museum, having to stop Jason getting bored with bland food. Pablo added some of his family’s deadly hot sauce and Jason liked it enough that he started kicking apart the kitchen in order to get more.
As the group led him into the museum proper and he planned on stealing one of the chandeliers, The Wesley Sniper sabotaged a farm truck so that it would crash into the museum, scattering animals all over the place.
This was when a lot of failures happened, leading to Jason trying to become the alpha goat, the police getting called in and the museum collapsing into the ground and some catacombs below. Jason used the space and tombs to re-enact select scenes from In the Name of the King: A Dungeon Siege Tale. He even fought a corpse he was pretending was Matthew Lillard, re-enacting some behind the scenes hostility. We then quickly Googled Matthew Lillard to make sure that he wasn’t actually dead. He’s not yet.
The police were convinced by Steve that this was an active set and such a good roll was made that they totally believed him. This was Steve Buscemi, after all. They offered to help him out later if he needed any police ‘on set’.

Jason needed calming down and as the night was drawing in, he decided to go snorkelling. The group all went with him into the water and after a nice swim, the group realised that there were lights back at the shore. It was the paparazzi who wanted to know about Jason’s bigamy. The Sexy Lady Statham Nun was with them, claiming to have been married to Jason all while he was married to his current partner (Rosie Huntington-Whiteley, if Wikipedia is right). The group tried to spin details and reveal the con, but tempers frayed, leading to a fight and Jason stealing a paparazzo’s boat. Steve decided to use Jason’s well-known fear of Titanic (the movie, not the event) to summon him to shore. The cops were called in for an extraction and nearly crashed. The group managed to fail rolls spectacularly again and again driving Jason into wilder acts and causing the incapacitation of Steve & Pablo. Jason was recovered from a yacht he’d invaded and a party which was boring him even while the yacht was sinking from where the group hit it with their boat.
Eventually Wilkins and Jason dragged the others back to the hotel, where they shared his trademarked drink of sangria and antifreeze. 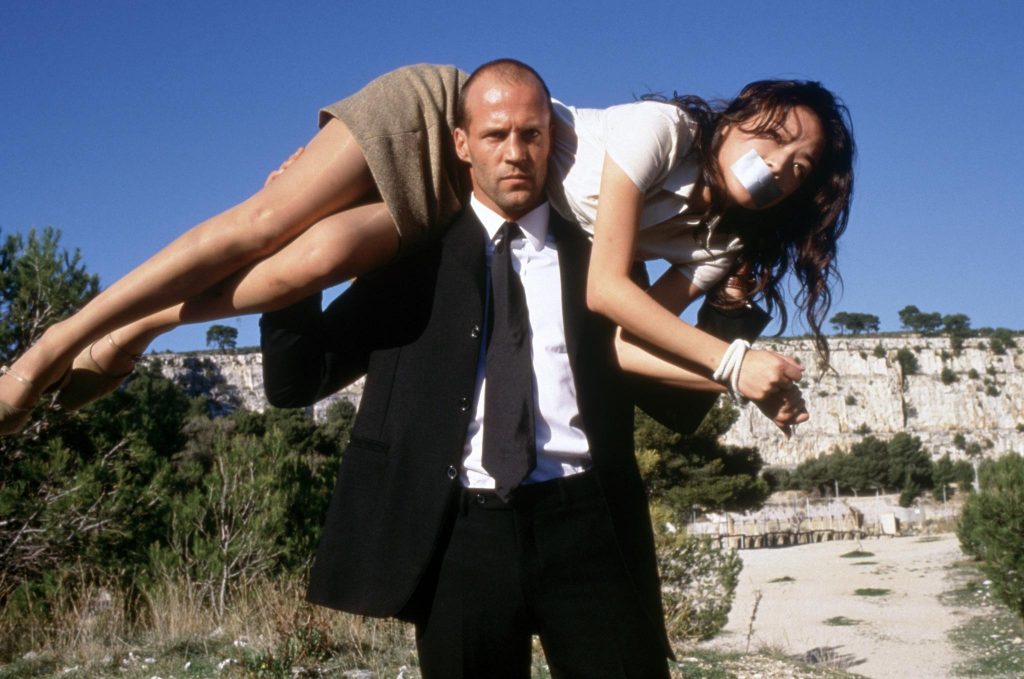 Jason Statham’s Big Vacation may have been hastily designed in a podcast episode and based off a random idea, but it was great fun. There were points where the group were virtually incapacitated with laughter. I admit I should have remembered more of Statham’s oeuvre than Crank 2, Fate of the Furious and In the Name of the King: A Dungeon Siege Tale, but I drew a blank as things escalated further and further out of control. I’m pretty sure that’s the core Statham canon.
The mechanic of having to look after an unstable star and try to make them have a good time was really enjoyable. I’m curious to try it again as there are a lot of locations and a lot of problems The Wesley Sniper can bring into the game. This is a definite recommendation from me and it’s free, so go get it.