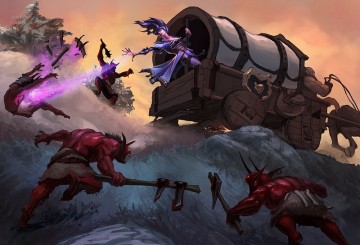 Liftron the Magnificent (Human lifter of all things)

The Cult of the Dragon stole money from a ton of villages and the heroes have to follow their caravan up north to the Mere of Dead Men. They need to do this undercover… 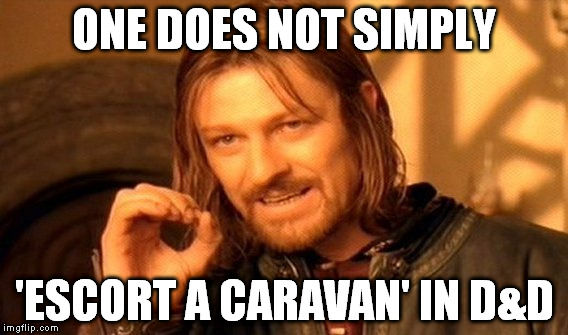 Okay, time to get a problem off my chest first.

What is it with Wizards of the Coast and caravan guards? Every time I didn’t have a prearranged slot at a convention and jumped into a D&D (or Pathfinder) game we would always be low level caravan guards. So many of their adventurers start with the group as caravan guards. It’s the new ‘killing rats in a basement’. It’s dull and it’s been done a million times. Hoard of the Dragon Queen started with the players as caravan guards as a default option, so I decided I wouldn’t have any of that nonsense. I made them all have reasons to know each other and be on the road. The players, being experienced and good at this sort of thing, worked it out far better than, “you’re a bunch of generic heroes guarding a caravan which you’ll abandon for no reason at the first sign of an adventure you’re not really invested in.”

I tried to protect them, I really did.

When I read this section of the adventure I groaned audibly when I saw that they had to go undercover as caravan guards. Then I banged my head against the table when I saw (spoilers for Episode Five) it’s not just one time they need to pretend to be caravan guards, but two! 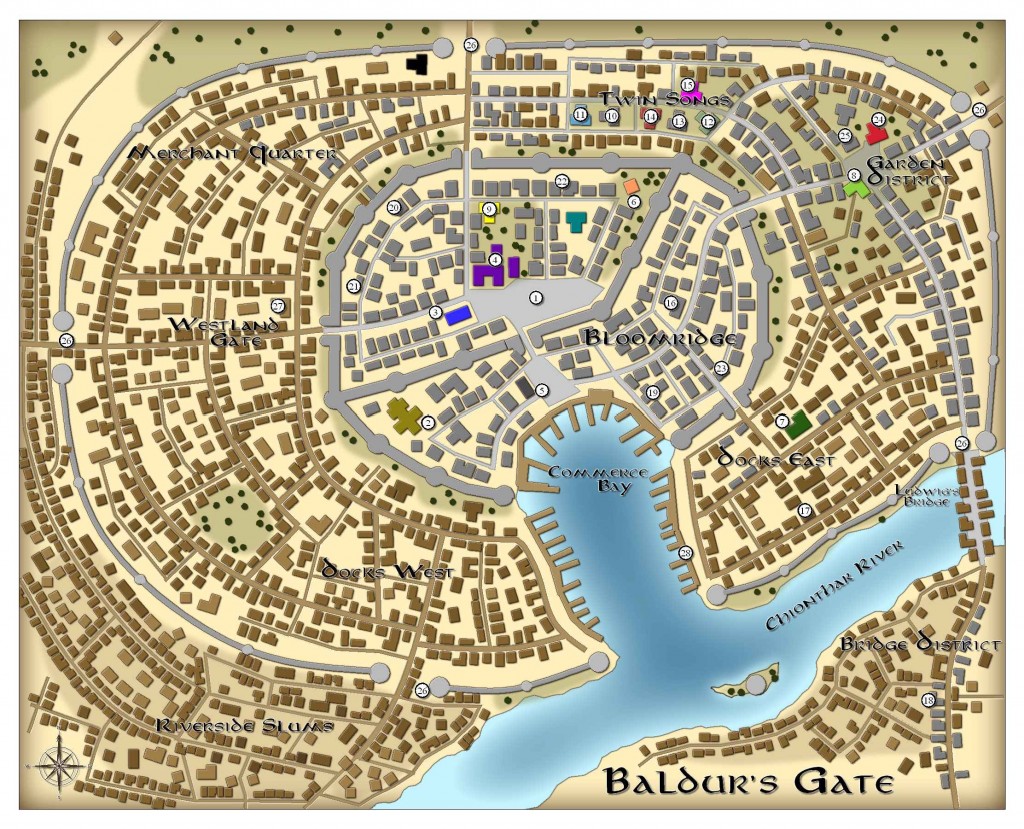 Back onto the point. Before leaving for Baldur’s Gate, the group shopped using the PHB and because I couldn’t find my copy of the wonderful Aurora’s Whole Realms Catalogue Jacob asked that we retcon a shopping trip in (note to self: find the catalogue and actually do this). Gatt practised bouncing around Elturel and his exit from the town was met with much celebration.

They hired Liftron the Magnificent and set off on a boat for three days of travel to reach Baldur’s Gate. Joggi ‘entertained’ them with his bagpipes and with fishing. Mockingbird and Mablung played chess. Gatt tried conning the crew into games of dice, despite being a terrible liar. When they arrived at the town, I brought up a few facts I’d found out between my knowledge of the Baldurs’ Gate games and the increasingly useful Forgotten Realms wiki. The group’s horses, much like any other livestock, would not be allowed through the gates and in the city. It has narrow, winding streets which grow slick with rain sometimes, so health & safety rules went a bit nuts. The other thing they needed to know was that the city irrationally hates dragonborn. Admittedly I didn’t know why, but the adventure referred to this, so they needed to keep Gesh as inconspicuous as possible. Painting him blue wouldn’t do. In all the disguise talk we realised that none of us knew about dragonborn having tails. I think we settled that they did. Vinnie pointed out the DM screen as having dragonborn with tails on it. I admit I might have called him a high fantasy racist as they were kobolds. Foolish Vinnie! 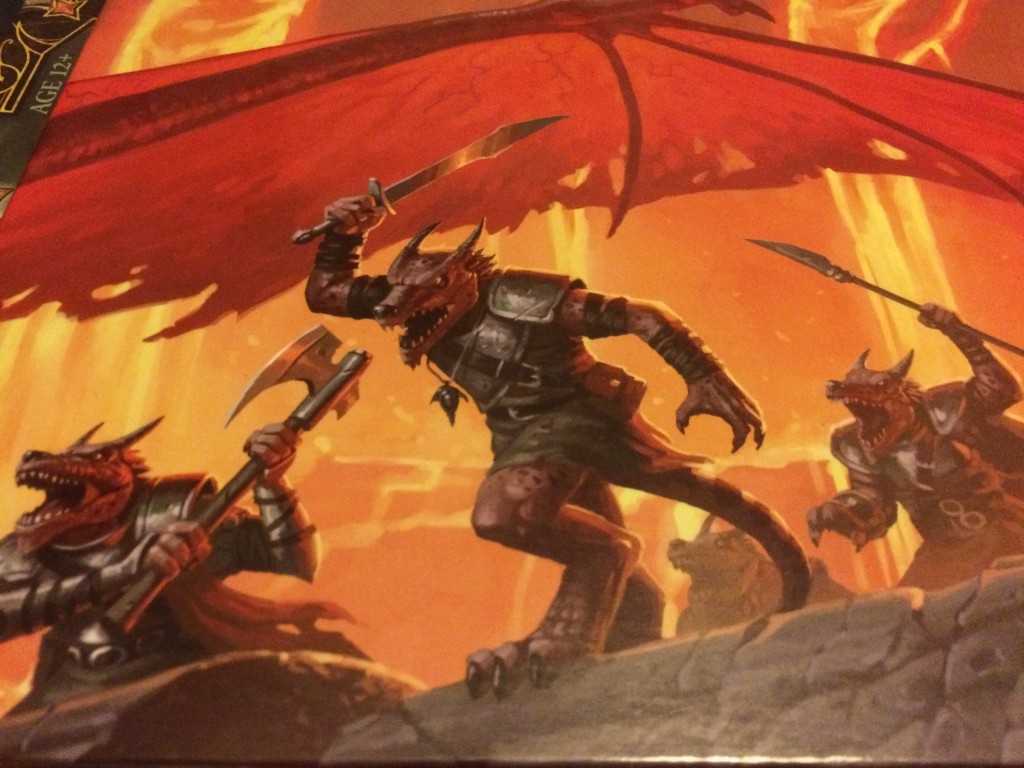 The contact at Baldur’s Gate was a Harper called Ackyn Selebon. His yard was outside of the city’s main gates, pressed up against the wall and made of a couple of floors with a large ‘garage’ to fix carts. Gesh was left outside while they determined if their host would be amenable to dragonborn, although it did make things worse as passer’s by scowled at him and he came close to bringing out Sheila (his newly-named warhammer). He was determined to show that whatever beef they had against dragonborn, he would be okay.

Selebon sent his minions away and put the heroes up for the night. He explained that he arranged the caravans going up to Waterdeep and Neverwinter, along the route the Cult of the Dragon would go. He would also be able to help them get work with businessmen who needed… ugh… caravan guards. They would need to try out, but Selebon could provide letters of recommendation. They also needed to pass time for what in the book is about ten days, but I cut down to one or two.

Joggi showed his skill at finding medicine to help out in their downtime and was hired by Lai Angesstun, a seller of oils & perfumes.

Mablung botched his medicine skill roll, sparking rumours of a ‘Dr Death’ and a magical leech outbreak. He was hired by Lasfelro the Silent, a man with a mysterious caravan which no one was allowed to enter. A scowling gargoyle sat on top, trained to attack anyone who tried to get in.

Gatt found some petty work to pass the time and ended up hired by Samardag the Hoper, a doomed purveyor of fine porcelain.

Gesh did some manual labour among more tolerant people and ended up being hired by a woodcarver called Noohar who frankly, overpaid for him.

Mockingbird changed identities to Lenet the Loquacious and was hired by a lawyer who needed protection while rapidly leaving Baldur’s Gate and setting up a new practice in Waterdeep.

Liftron followed Gesh’s example, mainly as it involved lifting. He was hired by a lumber merchant, of course. 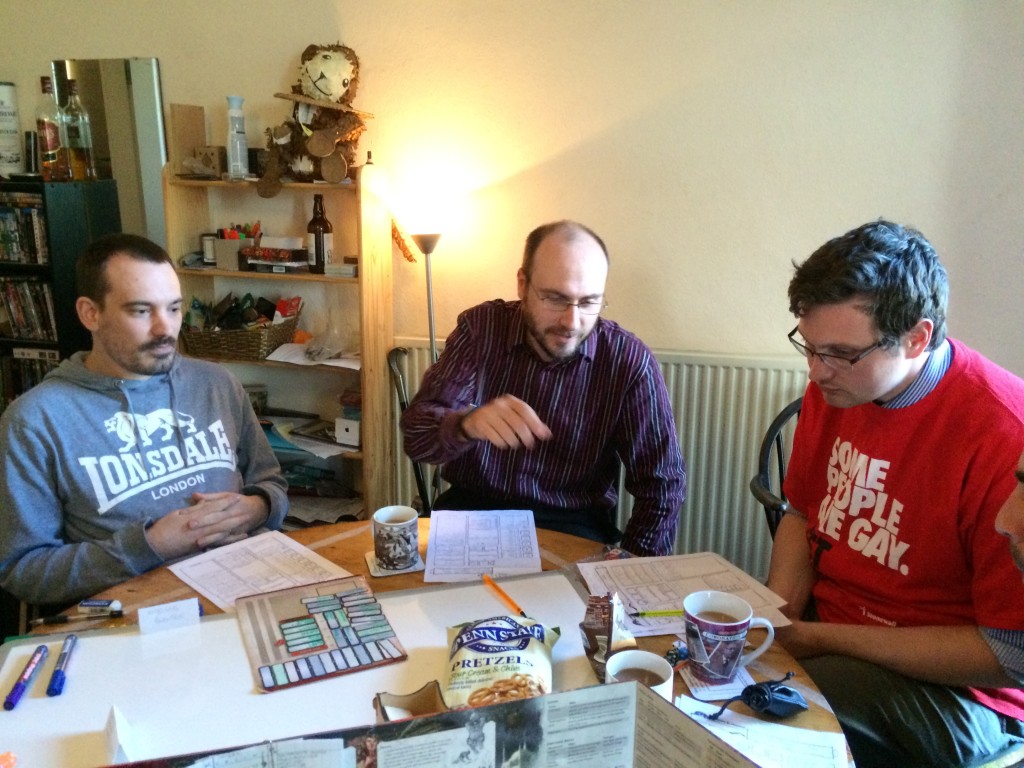 Their carts joined the others in the caravan, making for twelve in total, three of which belonged to the cult. A daily routine was set up, with the group eating cheap gruel in the morning, sticking to their posts and occasionally spying on the cultists.

Gesh and Mablung spotted one of the cultists stealing loot from one of the waggons, Gatt dreamed of having his heart eaten by a winged stag, so, you know, it was all the usual.

After a week or two on the road, the caravan stopped when a stag with a beautiful, golden coat ran past. A bunch of the younger adventurers started to gamble on who could hunt it down first, especially as it looked like the coat would fetch plenty of money. The players, even at third level, tutted and judged all the first level adventurer NPCs who were probably running off to their doom. Gatt decided to follow the stag after realising no one else was going down the right path. He tracked the stag down to some ruins and it started speaking in sylvan to him. Gatt, sadly, did not speak sylvan. He did, however, ask his familiar which most of the group had forgotten he had in his pocket. Tony, the weasel familiar, actually did speak sylvan. Apparently. It was passed down to him through second-hand weasel knowledge from his ancestors.

The stag explained that it was a spirit of the forest and in return for letting it go free, the stag gave Gatt a special bow (looks up the DMG for random magic item flavour). It was an antler longbow +1, which was half the normal weight, butterflies flew around it and gave a blissful feeling to the user. It sounded great, thanks to the random tables rather than the adventure, but sadly none of the group used longbows. Damn. I should have had more of a look at the weapons they like to use and changed it behind the scenes.

The next curiosity to pass their time on the road was Lasfelro’s waggon, which Mablung was guarding. Las was having problems sleeping from whatever was behind the gargoyle-guarded curtains of his waggon. Mablung asked to see what was there and was granted permission to go in without being ripped apart by the pet gargoyle. Inside were a mating pair of owlbears who were caged and kept docile, apparently some lord of Waterdeep wanted to domesticate them. 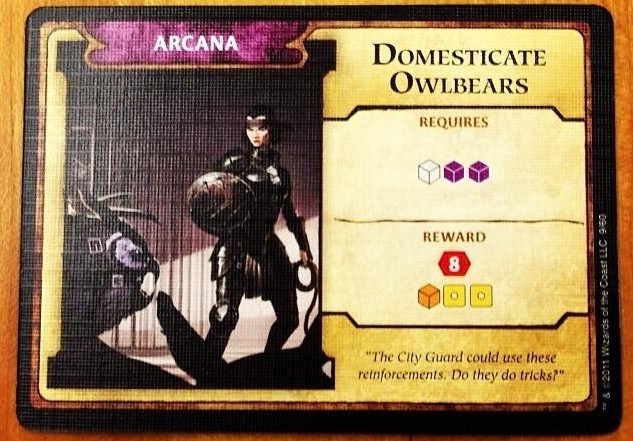 The guards were working overtime thanks to the first level adventurers who got killed, lost or sent on hero’s journeys when they hunted the stag a while ago. Replacements were picked up on the road, mainly a gnome woman who looked as shifty as Gatt and a human with a hat pulled over his bald, tattooed head. The group started shipping the gnomes pretty much instantly. When asked whether the girl gnome was pretty, Gatt retorted, “Is she hot? I haven’t seen many other gnomes. She could be a manatee for all I know.” No Gatt, she was not a manatee. Although now it makes his backstory a little more horrific if he’s been wandering the wilderness, trying to mate with manatees.

Gatt continued stalking some of the cultists and when he saw the gnome woman murdering and robbing a cultist, it was love at first kill. Well, for Gatt it was, the woman gave her name as Jamna and asked him several questions about his quest. Suspicious amounts of questions. The rest of the group weren’t aware of this bad decision, much like most of Gatt’s, so it was allowed to slide.

During breakfast one morning, Jamna found a curled piece of bone in Gatt’s gruel and announced that someone must be trying to kill them. The rest of the group were introduced to her and when told that they’re working for the Harpers, Jamna explained that she was, too. She’s totally not suspicious, you guys. Joggi and Gesh started to stalk the skinny man who they identified as a Red Wizard of Thay which meant nothing to any of us (including me). They did discover that he wanted in with the cultists and they warned him not to do that. He appeared to take them at their word. 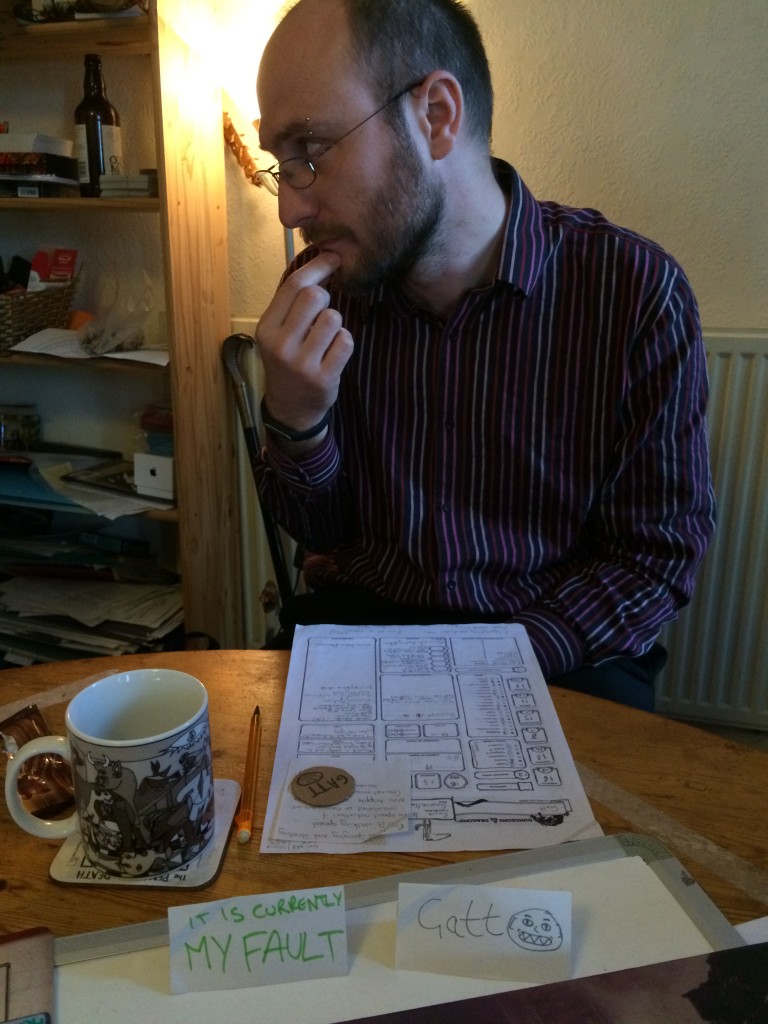 As the routine was setting in with Gatt and Jamna off murdering the occasional cultist and the rest of the group getting on with work, there was a massive cry from the skies. Three giant eagles with stag heads descended on the caravan! 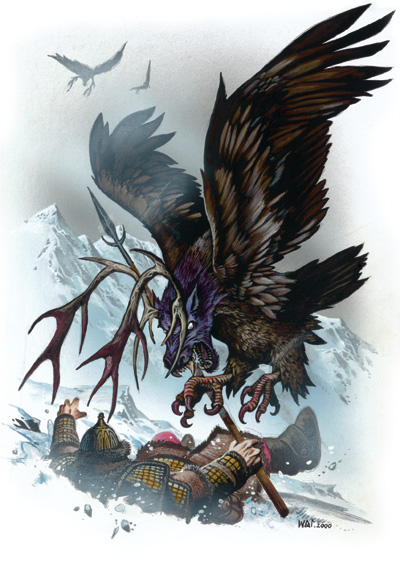