Psi-Run: Days of Future Past (a hacked review) 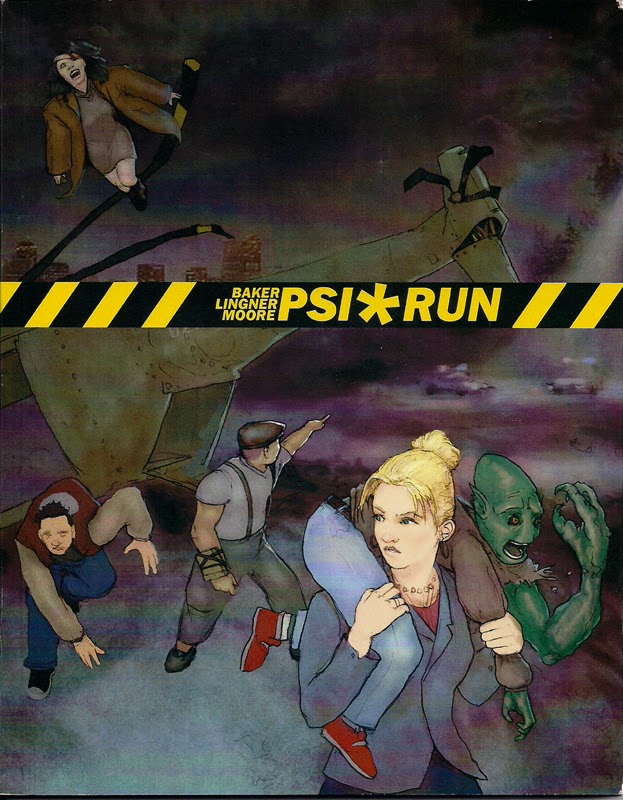 Original Game by Meguey Baker and Night Sky Games. Days of Future Past hack by jenskot on the Story Games forums.

Trapped in a world that hates and fears them, the X-Men were a massive part of my youth and still a core part of my fandom.

I’d read Meguey Baker’s amazing Psi*Run and managed to lose the character sheets on the morning of the day I was supposed to be running it. Then a player in my group notified me that he’d found an X-Men hack for Psi*Run and I knew the days had been saved.

Psi*Run is a fascinating game which uses the mechanics to tell a very specific story. The players take the role of psychic youths with amnesia, on the run from an authority controlled by me. They know a vague thing about their power, some questions they’re looking to answer about themselves during play and what they see when they look in the mirror. That’s it. Normally we create an enemy together, but this time it’s a fixed opponent.

We play in the dark alternate future of Days of Future Past. Home to Rachel Summers, Kate Pryde, an old Wolverine and a whole wall full of dead or captured mutants. 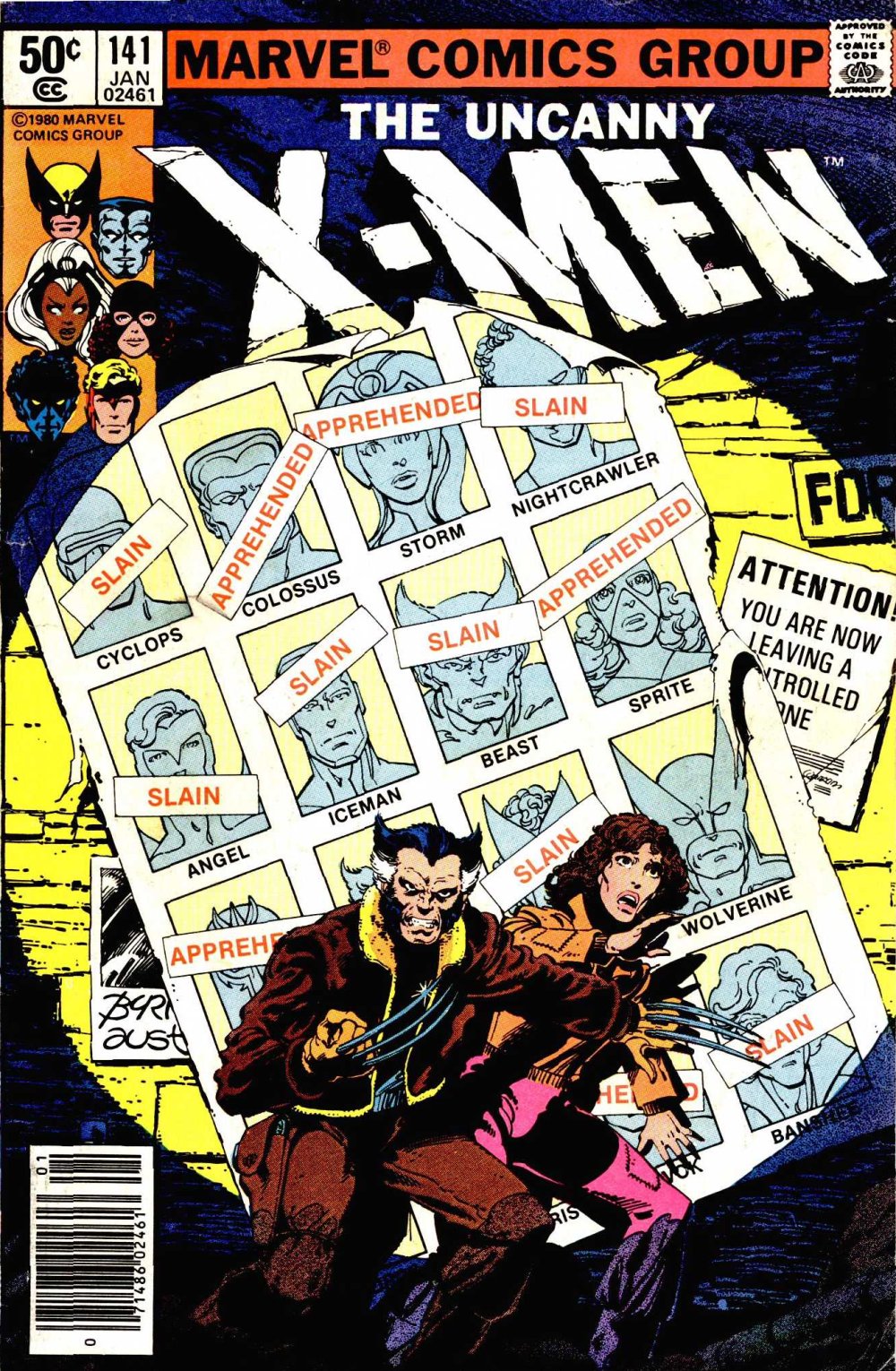 It’s a classic storyline from the Chris Claremont X-Men run, before grimdark alternate futures were a thing. Kate Pryde’s brain was transported into the present day, swapping places with Kitty Pryde who saw this horrific future. Later there would be appearances from many people in this timeline; Rachel Summers who was surprised to find her mother had died before having her, and Franklin Richards who was kind of a ghost. It was an odd story. It led to the Days of Future Past movie (of course), the hounds and Ahab who are on The Gifted at the moment. It did a lot.

The start is always the same, whether it’s Psi*Run or the Days of Future Past hack for it. You’re held by the authority, on the way somewhere when you crash.

In this case, they were in a helicopter being transported across Sentinel-occupied Manhattan. It crashed and the group woke up while water was pouring in. From the mainland, there were the spotlights of Sentinels flying towards them, looking for survivors. The group had to get out of the helicopter and flee to the mainland.

Lee played Reece, who had a patch, stubble and I’m pretty sure pouches. Mark was TP417, a character with literally black skin, a purple eye and the ability to teleport (I made a note that he might be one of Azazel’s many Nightcrawler-type children). Wade played The King of Hearts, who had a trench coat missing one sleeve and weird magical powers which were calmed down by a strange playing card.

Each location is a card laid out and the group will (mostly) move together from scene to scene. When a character does something risky they roll 4d6, plus more if they’re using powers and/or they’re risking harm. Each dice gets split between the following sheet: 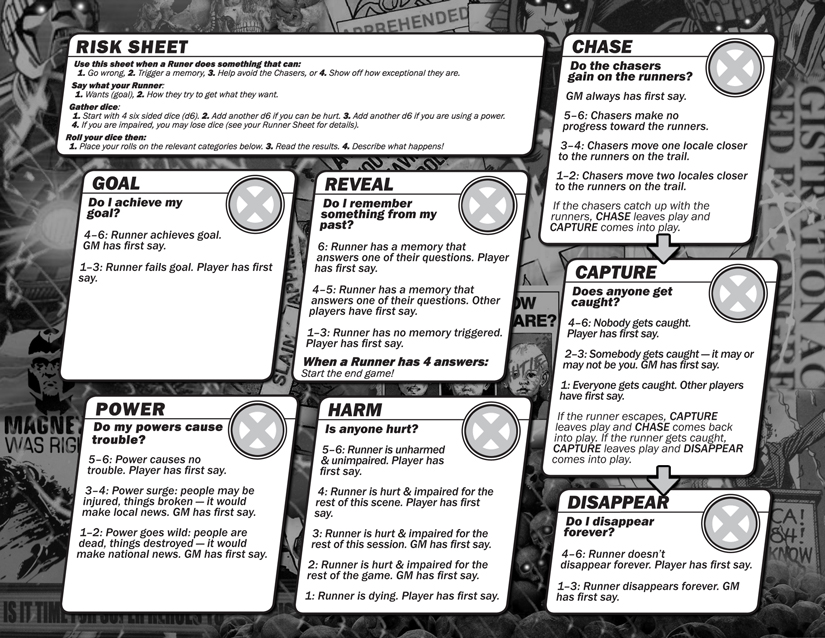 Like with 7th Sea Second Edition, I love the level of agency players have over what happens. Sometimes it’s better to suffer harm in order to succeed and knock loose a memory. Sometimes it’s even better to fail the check as a whole. Partial successes may concede narrative control to another player or the GM, giving them access to our fate or facility to answer your questions for you. 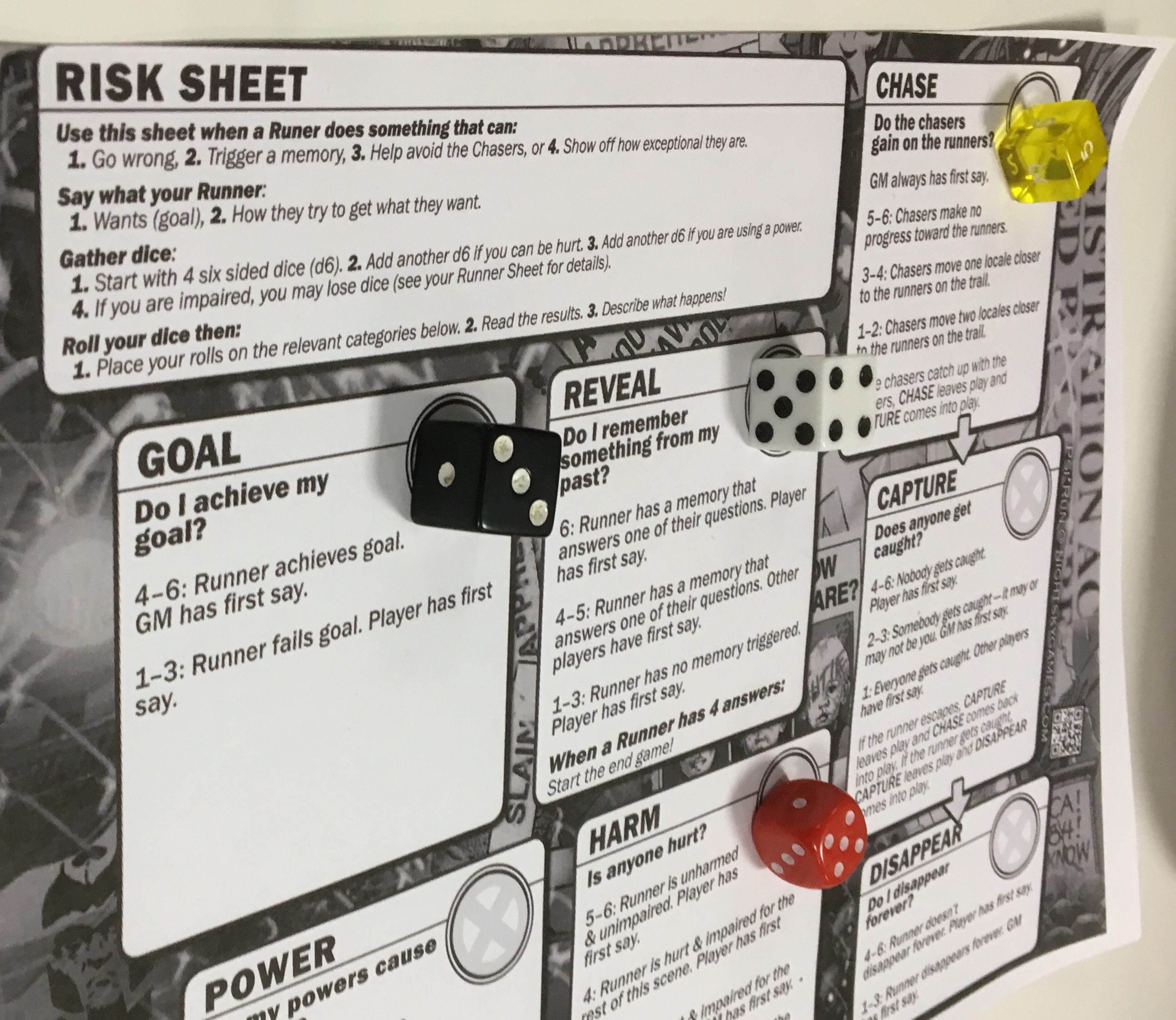 The Sentinels kept their distance at first, so instead some Hounds were called out. These were mutants brainwashed to hunt down other mutants. These may have even been people who knew our amnesiac mutants once, maybe fought with them.

The group split up, with TP417 teleporting through Central Park and watching some Sentinels fighting the defences of a crashed Shi’ar spaceship (a plot hook the group completely ignored). Reece carried The King of Hearts through the air until they reached what was once Avengers Tower. They found it home to an unstable Sentry, now completely taken over by The Void and likely to bring the Sentinels Dow on them at any moment. TP417 found Glob Herman squatting in the basement of the tower as no one would go there. Glob Herman for the uninitiated is a skeleton, some eyes and other bits all contained inn a translucent, gooey body. He’s flammable. And messes up a lot. The group ended up with him injured and on fire while they fled. 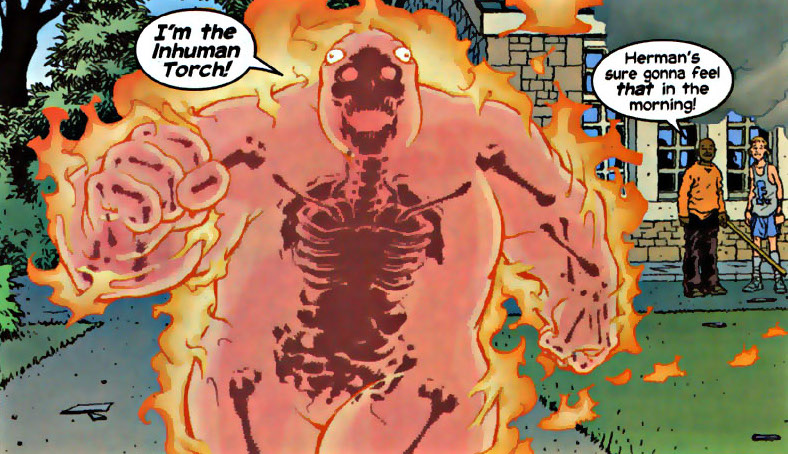 The constant state of pursuit is impressive in Psi*Run, especially as groups will often stop to think and bicker about their situation in any RPG when give a chance. I think the way I ran it could have been better and pushed on that more, as there were some times when the group were able to stall for a bit. The more rolls there are, the more likely it is for the Sentinels to catch up, though. The more injured the players are, the mechanics start to absorb the good dice or force a limited selection for their choices.

The group found their way over to Brooklyn and a mutant graveyard, where it became clearer that The King of Hearts was actually involved in some of the mutant tests, as some kind of next generation Hellfire Club type group. I brought in the weird little chicken Sentinels from Grant Morrison’s X-Men run and drew to a close eventually, possibly a little ahead of where I’d have liked. 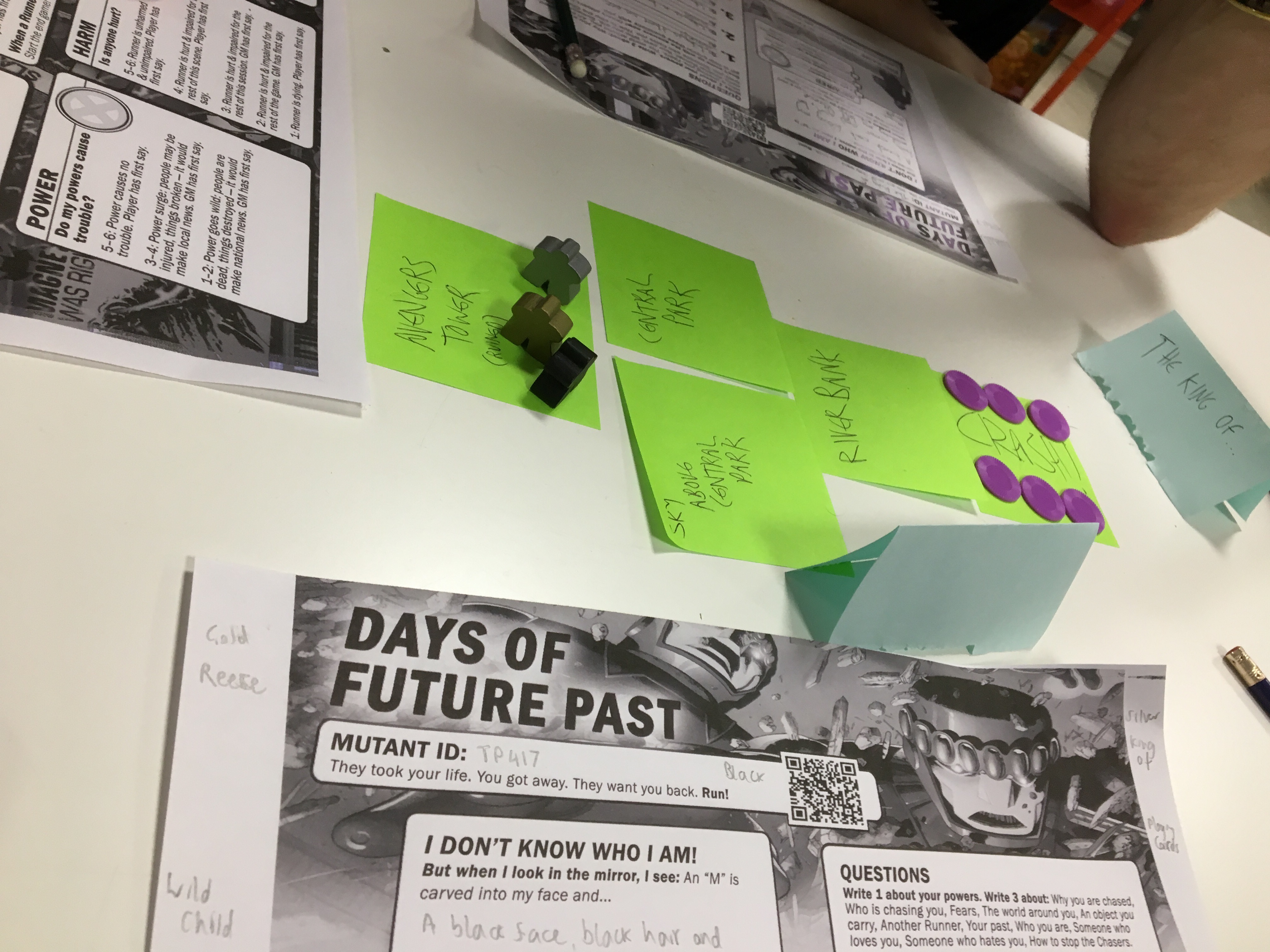 The game ends with the person who answered the most questions picking a fate for their character. Normally this could be dead, lost, on the hunt and so on. The group only gets one choice each, so whoever answered the most gets first dibs and so on until we get to the fate of the player who answered the least. It felt like Mark and Lee were a bit more focused on trying to keep the Sentinels at bay. If they’d have let the challenge get closer and apply more pressure then maybe it would have been easier for them to catch up with Wade.  These were still early days with Mark and Wade as players in the group and they have both got a lot better at learning to ‘fail forawrds’ thanks to games like Masks. Again, I could have run this better, possibly expressing ahead of time that this is a chase and letting them catch up a bit in order to get a memory is fine. 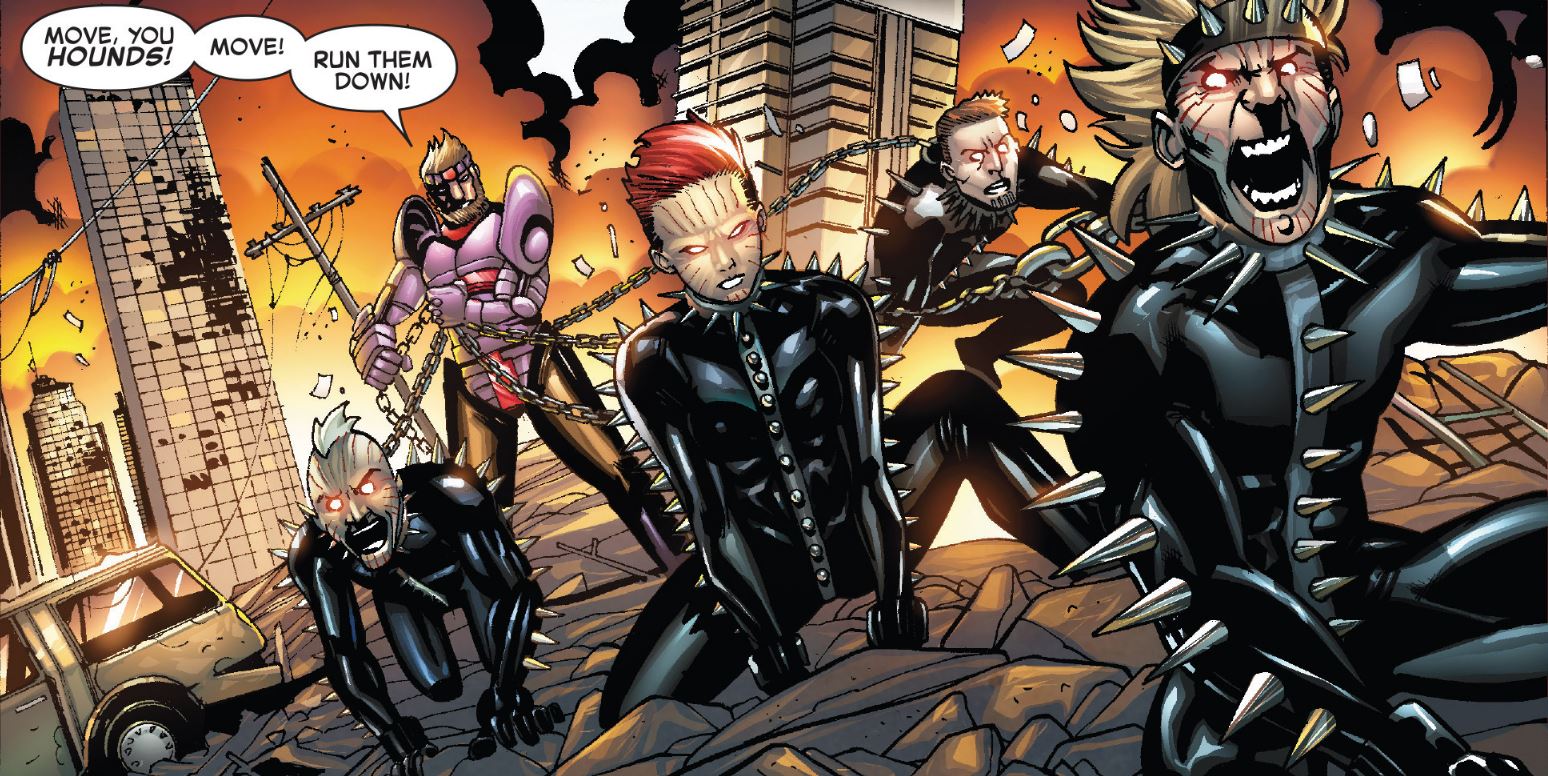 The book of Psi*Run is really well laid out with a lot of advice from cartoon heads about how to run and play the game. It’s a short, compelling read which will allow you to get through it in a short amount of time before your game night begins. There’s even a short quickstart script to tell you how to set it up which is great for when you’ve read the rules ages ago, had them fade a bit from memory and need a reminder. 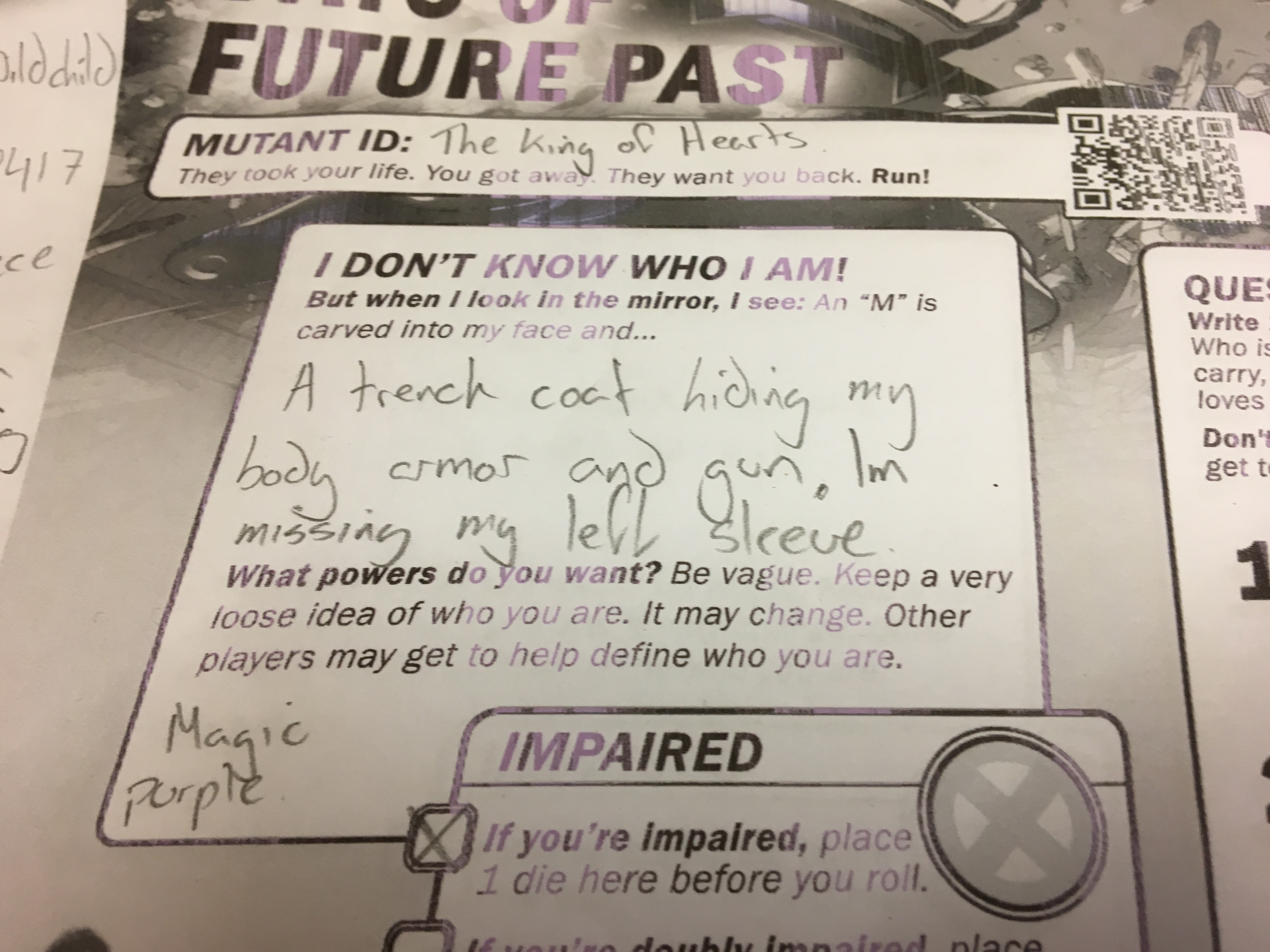 The core book on its own helps you create stories like Dollhouse or Firestarter, with super-powered or hyper-capable amnesiacs fleeing from a shadowy authority. The Days of Future Past hack isn’t necessary and adds a level of bombast which the game doesn’t need, but is very good fun. 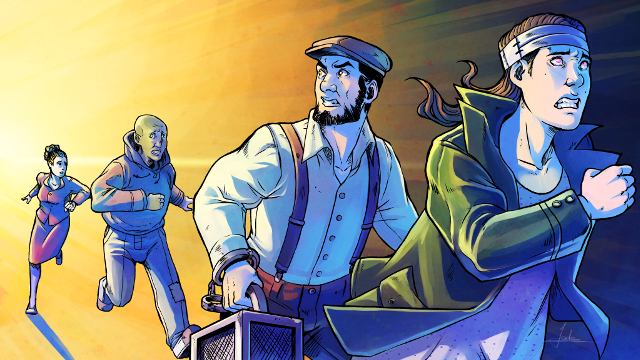 Psi*Run is great for one-shots, telling a whole story of weird youths with powers on the run. You can find the game itself here

The Days of Future Past Hack can be found on the Story Games forum, here 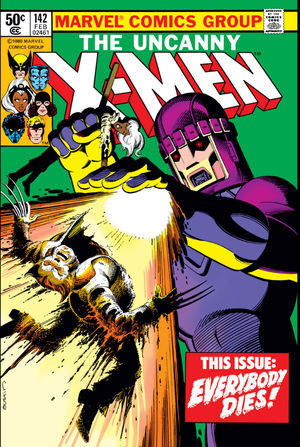 I keep mentioning hacks in this game review and I think I should clarify what those are.

A ‘hack’ is a modification to a game, often to fit in other genres or licenses. Sometimes to add or remove elements from games.

There are some hacks like Star Wars World which is a self-contained game that requires a Powered by the Apocalypse game in order to play it. Allie Buston’s Kickstarter, ‘A Parliament of Supplements’ included an ‘Into the Badlands’ hack for Apocalypse World and ‘Dungeon World Modern’, which I cannot wait for.

Melissa Spangenberg wrote, ‘A Single Man in Possession of a Good Fortune’, which is a Jane Austen hack of the samurai game Kagematsu. Grant Howitt made a ton of hacks of his own game Goblin Quest, all contained in the book itself.

Hacking is pretty fun and can give a new light to already good games.