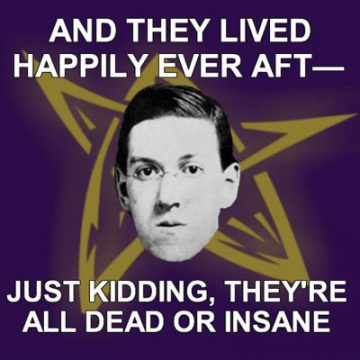 Sheriff Montgomery Parks, leader of The Order of the Light

Wendell Wilkins, leader of the Deep One death cult

The Deep Ones (weird)

The group had a few problems: giant winged insects were ripping people’s brains open for some ungodly reason, the gangster Tommy Magellan was using Fred Barrows’ psychic aunt to kill his way into owning the town and a death cult of fishermen were feeding corpses to fishy monsters. Sam and Hands killed Magellan and left his empire to the death cult. They both ended up in hospital for their sins and Fred was scouting out a creepy factory.

I handed Josh a few notes to read out in a newsreader voice, mainly to clue the group in on what happened and the skip ahead in time so everyone would be relatively healed up. The gist was that Tommy Magellan was dead and the FBI were investigating.

To skip ahead in time, I asked Doc and Dusty what they did to help with the Order of the Light’s quest and how they failed. They were out scouring for reagents for the order. Dusty froze up with fear and Doc smacked a mi-go with his book. Then they fled.

I asked Fred whether he went into the creepy factory last session and he mentioned that he didn’t. He’s been looking into how to get his aunt discharged from the asylum now that Magellan’s grip on it is over. He was making good headway though. Guys in suits (looking like Jansen ones) had been staking out the hospital, so Dr Rodriquez said that he would sign over Gladys if Fred got rid of the guys in suits. He used his Lore move to find out what they were about. Apparently they came from Boston and they spoke with an odd kind of buzz in their voice. They didn’t leave the mainland, despite the relative ease of access to the asylum.

That was the past, now to the present.

Wendell gathered Sam and Hands in order to thank them for what they’ve done. He mentioned some problems in the big plant and that he needed people to scout for him. People were going missing around there and no bodies.

With their new sources of information, Doc and Dusty decided to have a seance in order to find more information out about the wider situation in town.

This was the first time we’d dealt with spellcasting, so it was a new thing for all of us to find out about. I decided that the seance was a Power 7 ritual, one which required voodoo components from the old station master. They needed to roll +Luck, subtracting the Power of the spell and adding points for any Lore spent. Dusty would be the summoner here and Doc would take point.

Dusty had a modified score of 8 which meant the ritual went off with side effects! Woo! Each of the players involved had to pick two problems from a menu of options.

Lee picked that they would add a new hazard (damn him for doing so this late in the game) as it would be the option to damage him the least. Then they would both have a mental problem. Lee picked delusions and hallucinations, specifically of his war times. Jacob’s mental problem which was an obsession with his book (as if he didn’t already have it, now it had been mechanised.

But it was all fine, because they spoke to a ghost to tap into its knowledge of the area and the psychic horrors which had gone on. And what did it say?

Okay, I’m going to level with you here; the game happened quite some time ago and I can’t remember exactly what the ghost said. My notes just say, “exposition” which is really not helpful. I can only assume that it was about how the mi-go were looking for a way home, but needed the brain of a psychic to do this.

Cut to Gladys being escorted back to Sam Star’s townhouse by Fred. Sam greeted her kindly and gave Fred some money to send her away to a nice institute near New York as she was the one person who seemed to want to save the town.

At that point, Doc and Dusty burst in with cries of, “We’ve got to kill Gladys!” which went down well.

There was a massive debate in the kitchen of the townhouse, Doc, Dusty and Hands initially on the side of giving Gladys to the mi-go while Sam and Fred weren’t keen. Gladys herself was sat in the drawing room, away from all the talk of potentially sacrificing her to giant lobster-wasps.

The taxi arrived and was told to wait outside. Sam managed to convince the group that Gladys should be saved and The Order of Light could deal with the monsters. At least, he thought he had. Dusty was busy watching the taxi driver, certain he was an old friend who’d died in The Great War. Hands paid the man some money to stay, and then a little more for… reasons.

Fred said goodbye to Gladys as they prepared to put her in the taxi. She warned him about Doc being evil, that they need to get rid of his book. She went away and that’s when Ash explained what Hands had done. He bribed the taxi driver to drop Gladys off at the factory and not look back.

Time passed. Wherever Doc was, there were calls from Dr Whateley, wanting his book back. The monsters vanished from the farms and the railyard. I asked the group to each provide me with an epilogue for the characters.

He checked the railyard shortly after Gladys left and saw that the red grass was gone, as were the monsters. He forged deeds for Magellan’s properties and had the fishermen help with his political campaign. The railyard was rebuilt over time. He called the institute in New York once to check on Gladys but she wasn’t there. He was busy and didn’t bother looking further into it.

After a brief stay in New Beginnings to help him get beyond his lingering PTSD, brought to the surface by the séance, Dusty was offered a job as an orderly. Over the next few months he started renting a place of his own from Gilbert Young and courting Ruby from the diner. She reminded him of his late wife.

In the fortnight after the calls started, Doc began to scour the book for help fending off Dr. Whateley. He found an abandoned farm to study away from others, but was eventually brought in by the police for causing problems for the local farmers. While he was being held for his disorderly behaviour, a man walked in. Dr Whateley. The police station burnt down and people saw a silhouette of a man walking out, but no one knew whether it was Roberts or Whateley who left that night.

Flush with victory and sensing an opening in the market, Hands brought in a lot of ‘Italian labour’ if you know what I mean. His men were coming in to help run the criminal element around here and with the ear of the future mayor Sam Star, everything was looking bright for Hands.

He kept calling the institute, but Gladys wasn’t there. Two weeks later he took the bus down and heard that she never checked in. He suspected Sam, Hands and Doc. It clicked that Hands paid off the driver.

Later, Hands stumbled out of a speakeasy and into his car, fumbled with the keys and dropped them on the ground. He ducked down and we saw Fred in the back seat, his large hands ready to throttle the man who sacrificed his aunt.

Campaign posters were going up all over town. “Vote for Sam Star!” they said. A pair of fishermen were pasting up a poster when they were dragged away by unknown people. They were left outside the fishermen’s district with axes in their chests and, “Heretic” painted above them. The investigators had solved one problem, but another was just beginning.

So that was Tremulus. There were some direction issues early on. The group felt they needed to make people detached from the town and in doing so made people so removed that there was no investment. Steve left the group with the one long-time resident, only to be replaced by Josh and his aspiring mayor. That was the real help, bringing energy and direction to the plans. Speaking of which, here are my notes from the start of the campaign. The players picked the plot elements of the questionnaire and they led to this: 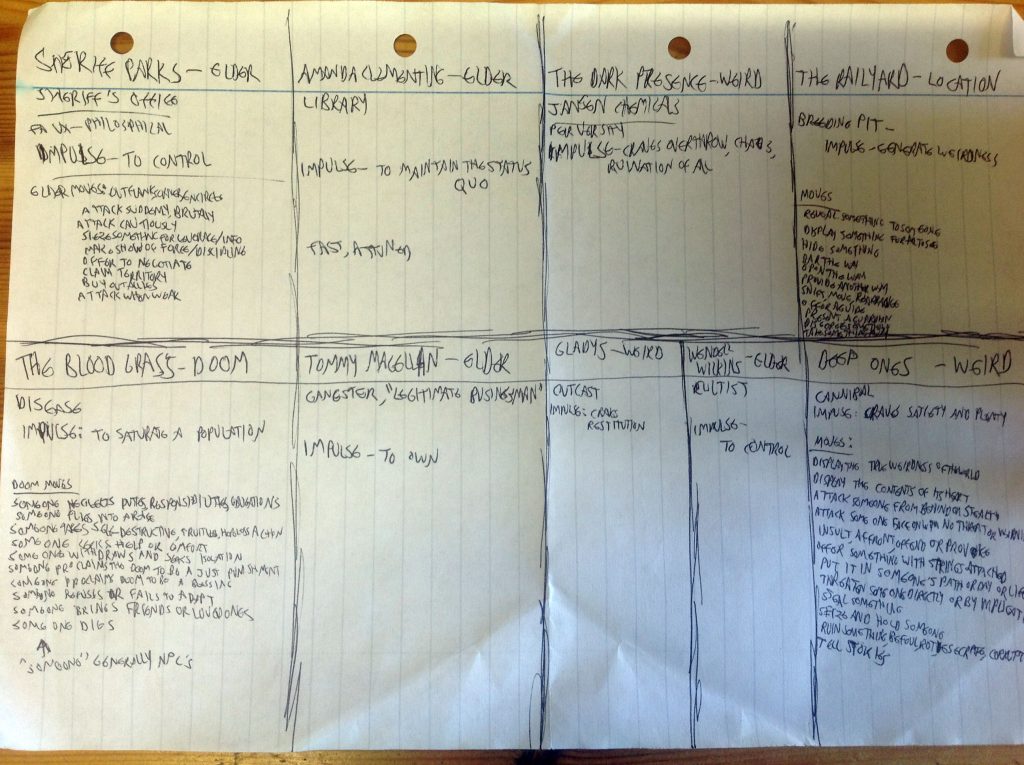 This is the list of hazards and the expanding on it which I did. Then I had a power map: 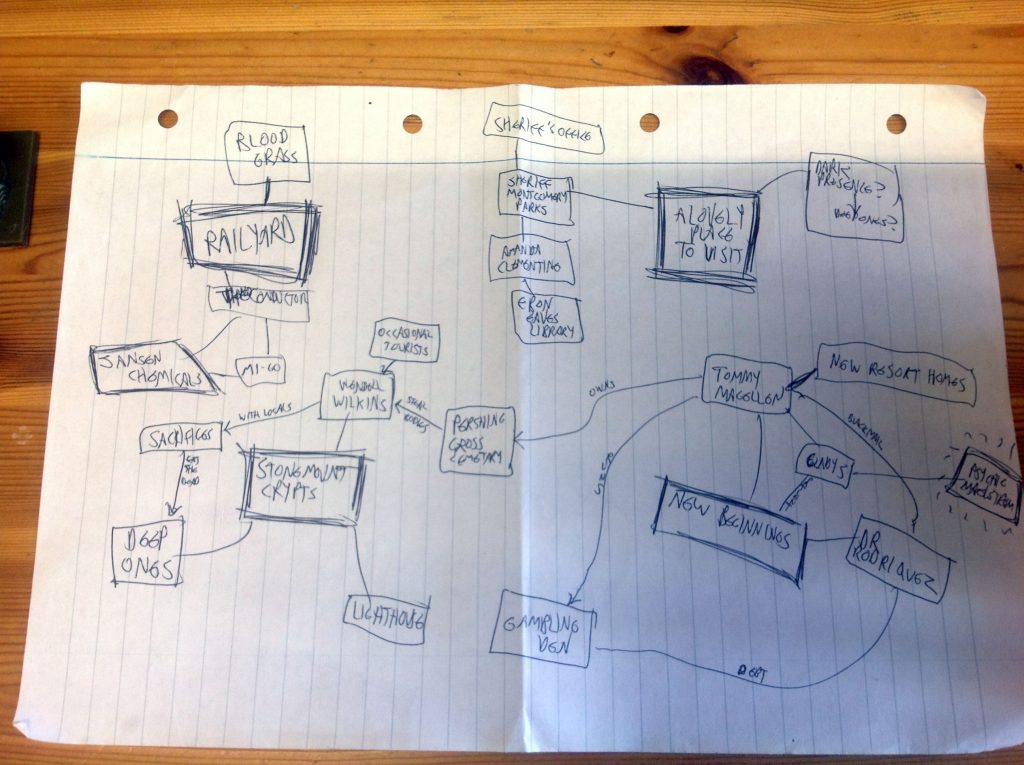 This shows the flow of it all, bringing the nine plot elements into two main storylines. That is expanded on here: 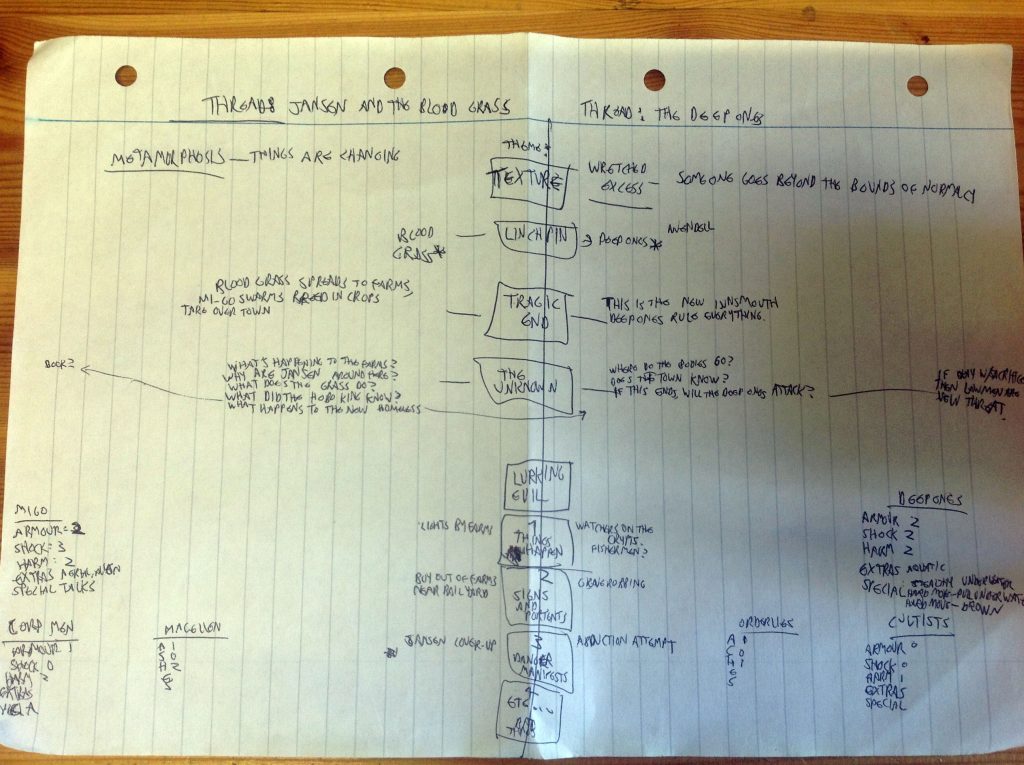 You can see the kind of things which would have gone on.

Tremulus has no real experience system for character advancement which is in keeping with Lovecraft, but then there are things to advance. I’m not sure if they ran out of room or decided from the start it would be a GM decision when people could advance anything.

The direction problem is slightly on me and on the other players. Maybe I shouldn’t have emphasised as much that they were new in town. With no stakes for them, it was difficult getting the group (especially Doc) to stay. There are other campaign playbooks with a certain amount of fixed direction to them (a journey, an Antarctic expedition) or of course any Call of Cthulhu adventure can be used. Conversion of existing modules would remove a certain amount of the mystery creation, which is the only issue with that.

I played the mi-go card way too early and should have had more hints of horror before going for that. I think this is something games like Lovecraftesque will be good for with the framing of act one, two and three beasties.

Would I run Tremulus again? Yeah, I enjoyed the system and weathering the confusion around episode two for the madness of episodes five and six was totally worth it.

I might run another campaign with these characters. Lee would need to pick a new playbook for Dusty (there is an Orderly one, handily). We discussed Sam Star’s campaign and that he would probably be done with his term in office if we returned. Hands and Doc are probably dead and god knows what happened to Fred. I like the ambiguity of the end for some of these characters, so if we don’t revisit it, that’s fine, too.

Personally, I’m quite tempted to try the Antarctic station one, maybe this winter.

Tremulus is by Sean Preston and Reality Blurs. It was originally created on Kickstarter and is now available on DriveThruRPG.