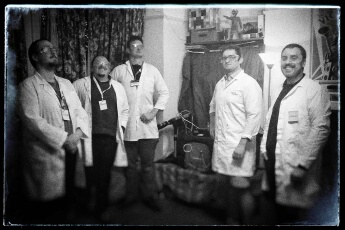 A game about free will in the style of The Twilight Zone for six players.
By Bully Pulpit Games.

Brasseau was the first to crack. He wouldn’t show his card, demanded to be let out and insisted that this was all some elaborate farce being played on him. He rattled the door handle but as we’d found out moments before; it was sealed shut. Van Der Meer revealed his gun and insisted Brasseau sit, calm down and explain what he’d seen. Chandrakar and Takahashi were about as devoid of empathy as they tried to calm him down by explaining how expensive the project was as a way of proving this wasn’t a prank. Finally Brasseau revealed what the whirring monstrosity named Juggernaut spat out a prediction that in nine years he would die of pancreatic cancer after a short illness and Juggernaut is never wrong. 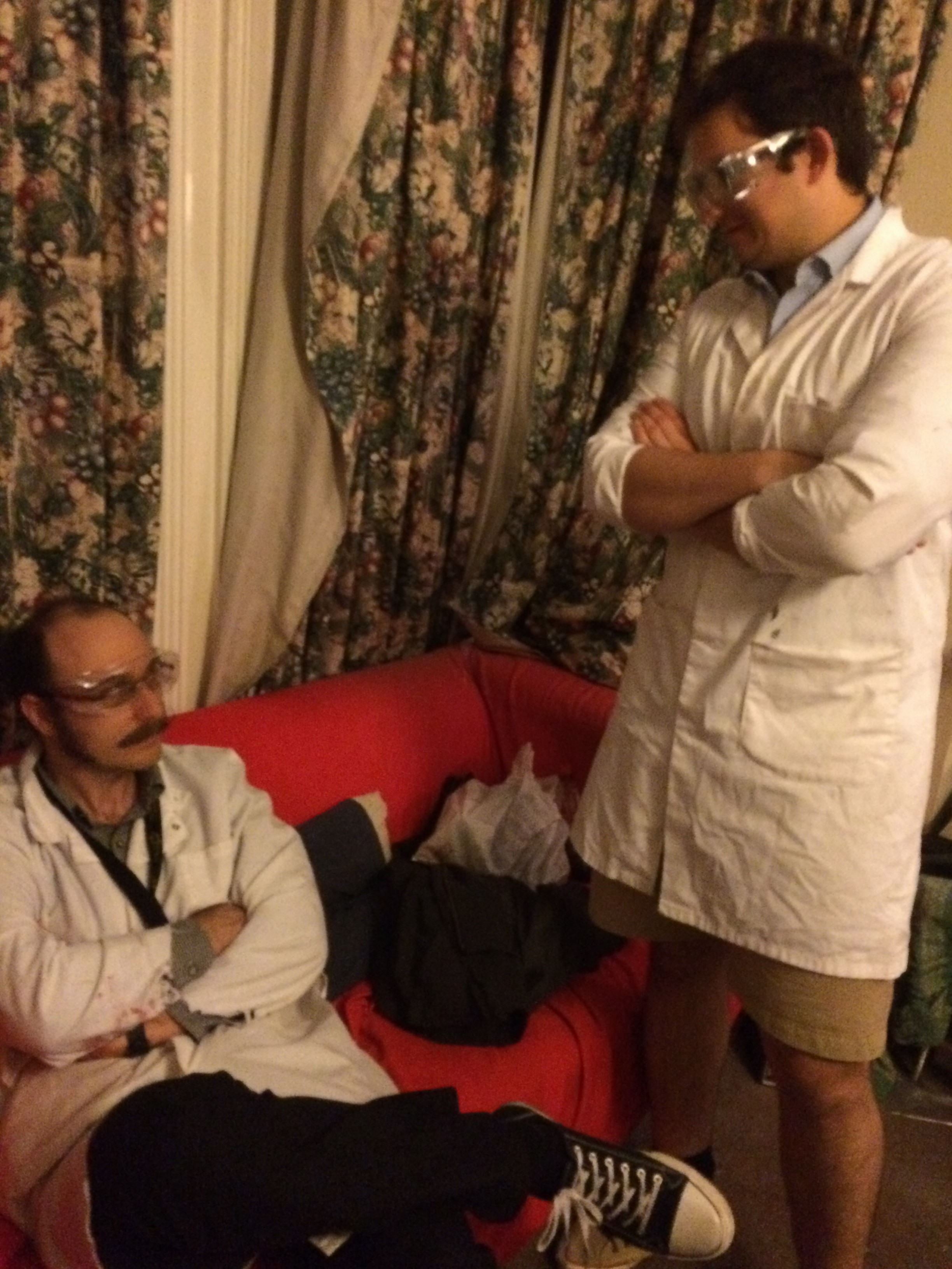 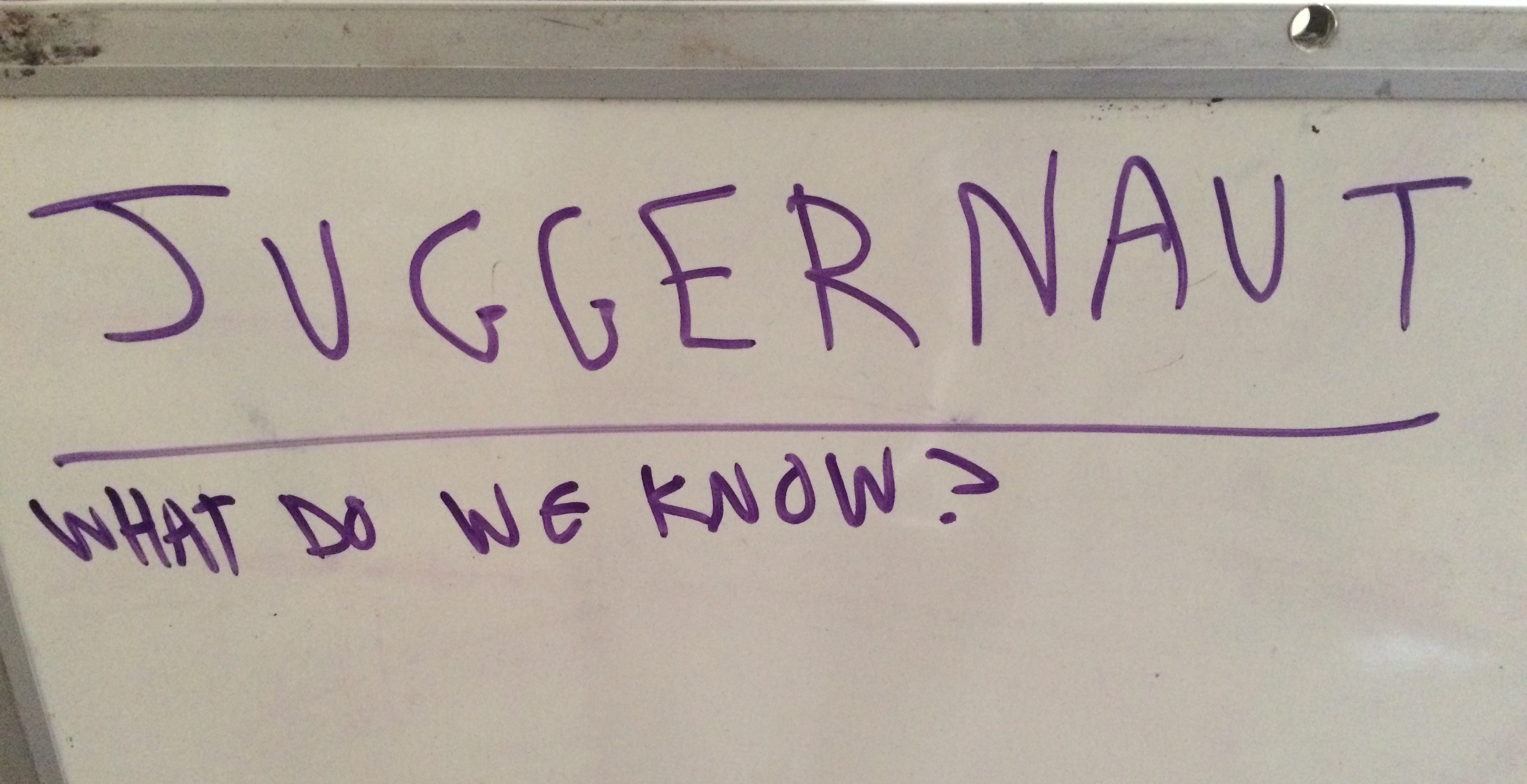 Juggernaut is a freeform role-playing game, a progressive LARP… it goes by many names these days, but basically means free play is the dominant factor in this game rather than dice or anything along those lines, taking its’ lead from improv theatre more than D&D. I kept this fairly quiet when introducing the game to my group. I told them to bring science-based props to the game and lanyards, with no real context as to why. Two of the group are science teachers, so they managed to outdo themselves by bringing a bunch of lab coats and some safety glasses. I’d already printed out the cards we would be using and randomly built a deck using the cards provided in the game. Then I built Juggernaut. 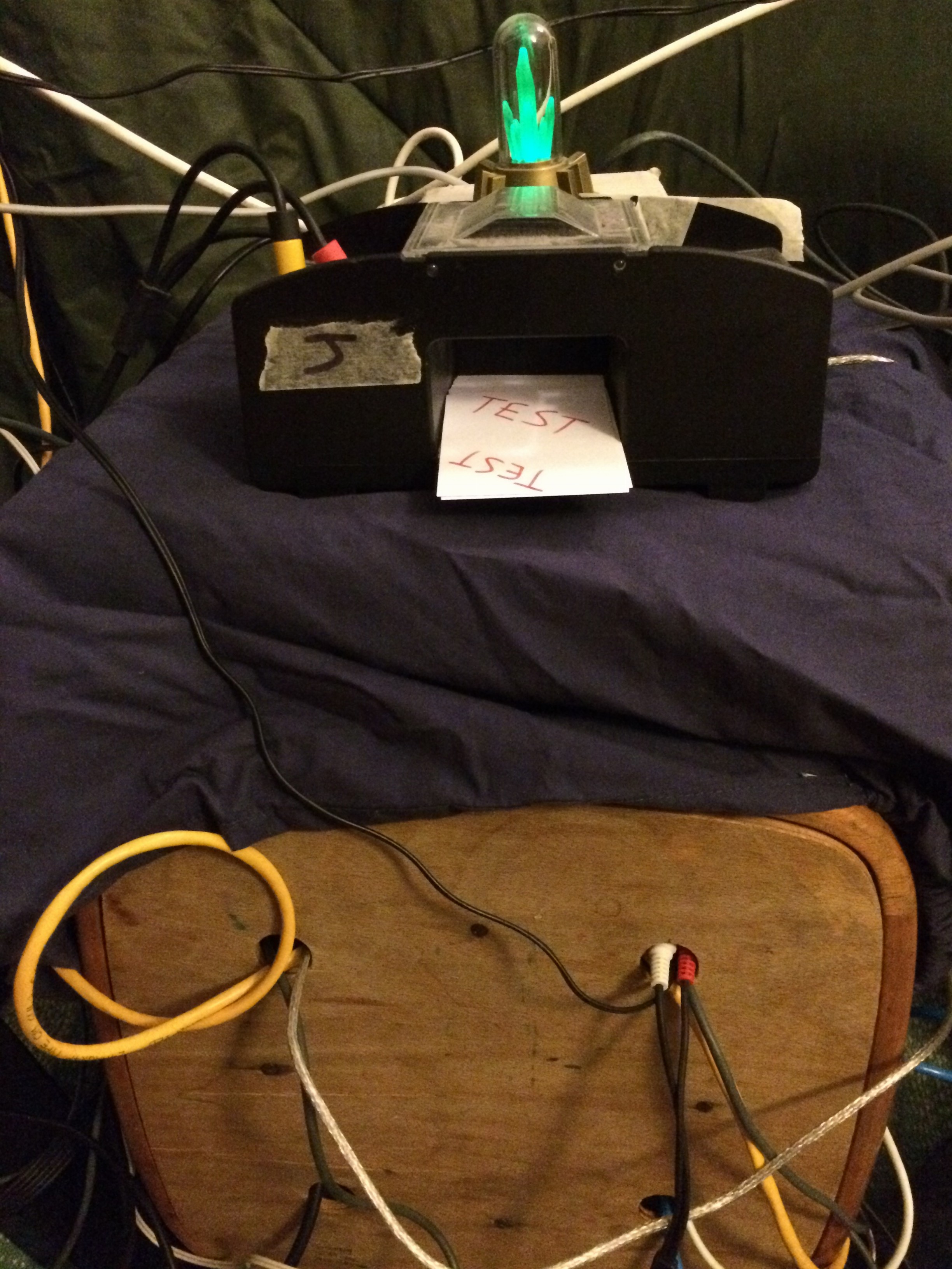 Yes, it’s a stool, some wires, a little light-up Kryptonite prop, two Rock Band drum sets and a card shuffling machine we have dubbed “Alex 2” after one of our group who is sadly no longer with us (in the country… he’s not actually dead, that I know of). For this game it would play the part of Juggernaut, because I felt that something should do. Juggernaut is a code-breaking machine built in 1950, it’s so advanced and so great that it can predict codes before they happen. That’s not all it can predict, as it turns out.

We entered the room, took some photos of the group to commemorate this test run and prepared to start the device. Dr Takahashi had done all the maths involved in the banks and banks of magnetic tape behind the machine. Dr Chandrakar had designed the unit itself and then Dörflinger was there to oversee the actual building. The others had different purposes, but on my character sheet it simply stated a couple of small facts about them. Brasseau was apparently a distraction and nothing more. Van Der Meer was exactly the kind of person who would have put my family into a concentration camp (I’d spent WW2 in a camp in the US, being a California-born Japanese man). Simms was in awe of the machine, but obviously had no idea what was going on. We all took characters based on name alone and read through our backgrounds as well as these attitudes we had about each other. A lot of them meant we were a powderkeg being prepared for a high stress situation like that of Juggernaut. Being again, technically a kind of LARP, I read out the safety section from the svelte book which was something I know my group would kind of take for granted but it was good to set the tone, use the “cut” and “brake” keywords for if things get too intense or in case physical safety becomes compromised. Knowing my flat and the amount of chairs we’ve gone through, it was probably necessary.
Juggernaut itself had a stack of pre-sorted, randomly-selected cards in it, but before we could draw, someone had to push the button. The button in this case was on my iPad, connected to the television. A deafeningly loud and long machine noise would play and when it was done someone would hit a glass with a pen because it was felt necessary to add a ‘ding’ noise to the process. I added a mention of that to the whiteboard. This was something kept up with no matter how crazed things got. The first prediction was stupid;

“On 3 July 1950 you will discover that you have misplaced a monogrammed fountain pen and enlist the others in a pointless search for it.”

Brasseau pulled it out and only then realised his pen had vanished. I asked whether that was the monogrammed pen I’d seen him use earlier and yes, it was. It was important to him. 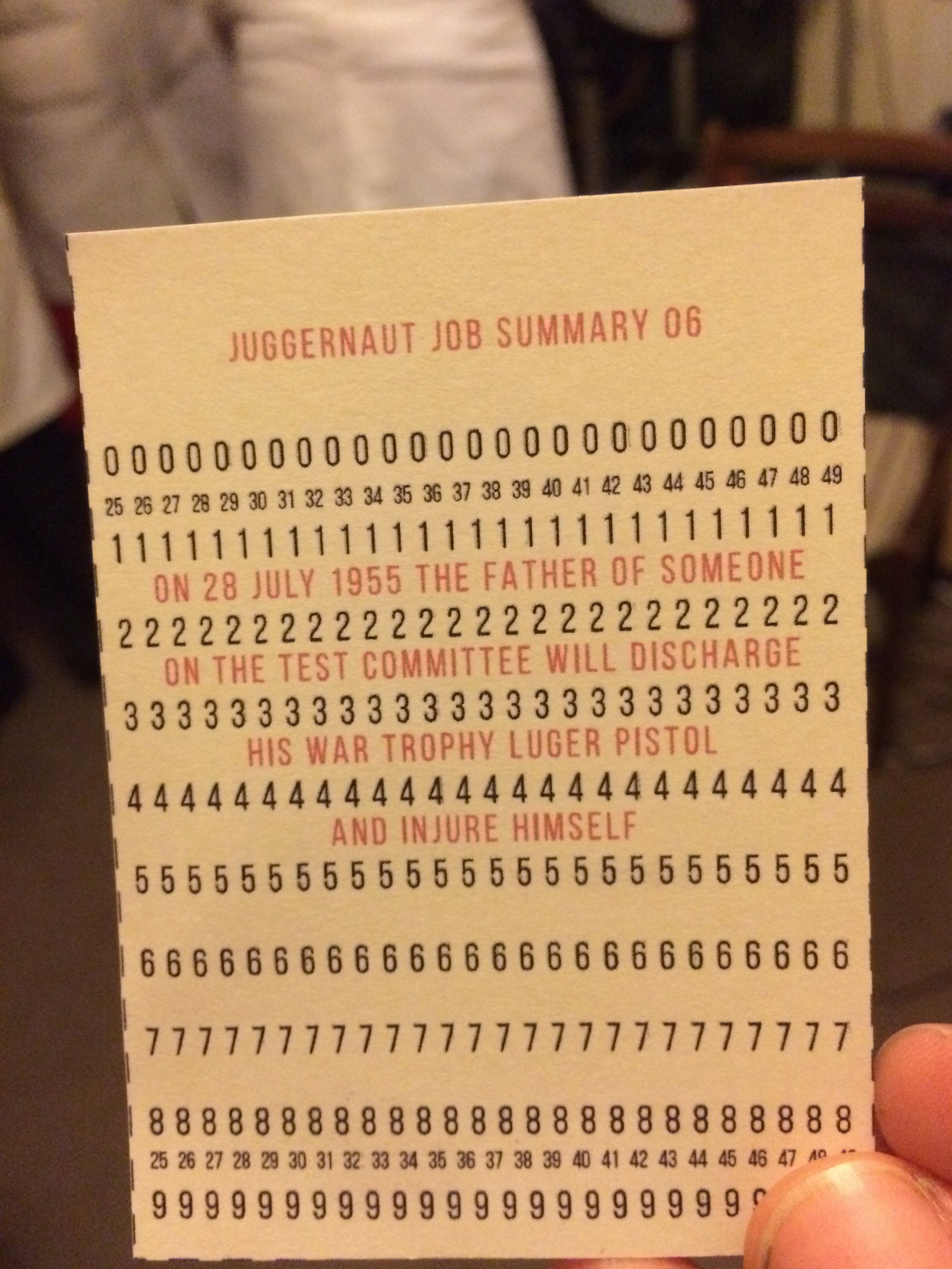 The game consists of 22 card draws over 1-2 hours, which doesn’t sound like much. We’re all playing scientists or the like and the game ends after the last card is drawn. The first card is a test pattern and even then, we celebrated in character. The machine worked! Sure, we hadn’t seen it predict the future yet, but that didn’t matter, the thing itself could print out. We weren’t aware there was red ink being used, but it was rather impressive. Then we discovered the missing pen. Some of the predictions were set in the far future of the 60’s, or even at one slightly jarring moment in 11 September 2001. None of our characters guessed we would be alive at that point, especially not Brasseau after his machine-based diagnosis. Chandrakar kept trying to reassure him that he was functionally immortal now. At least for nine years. 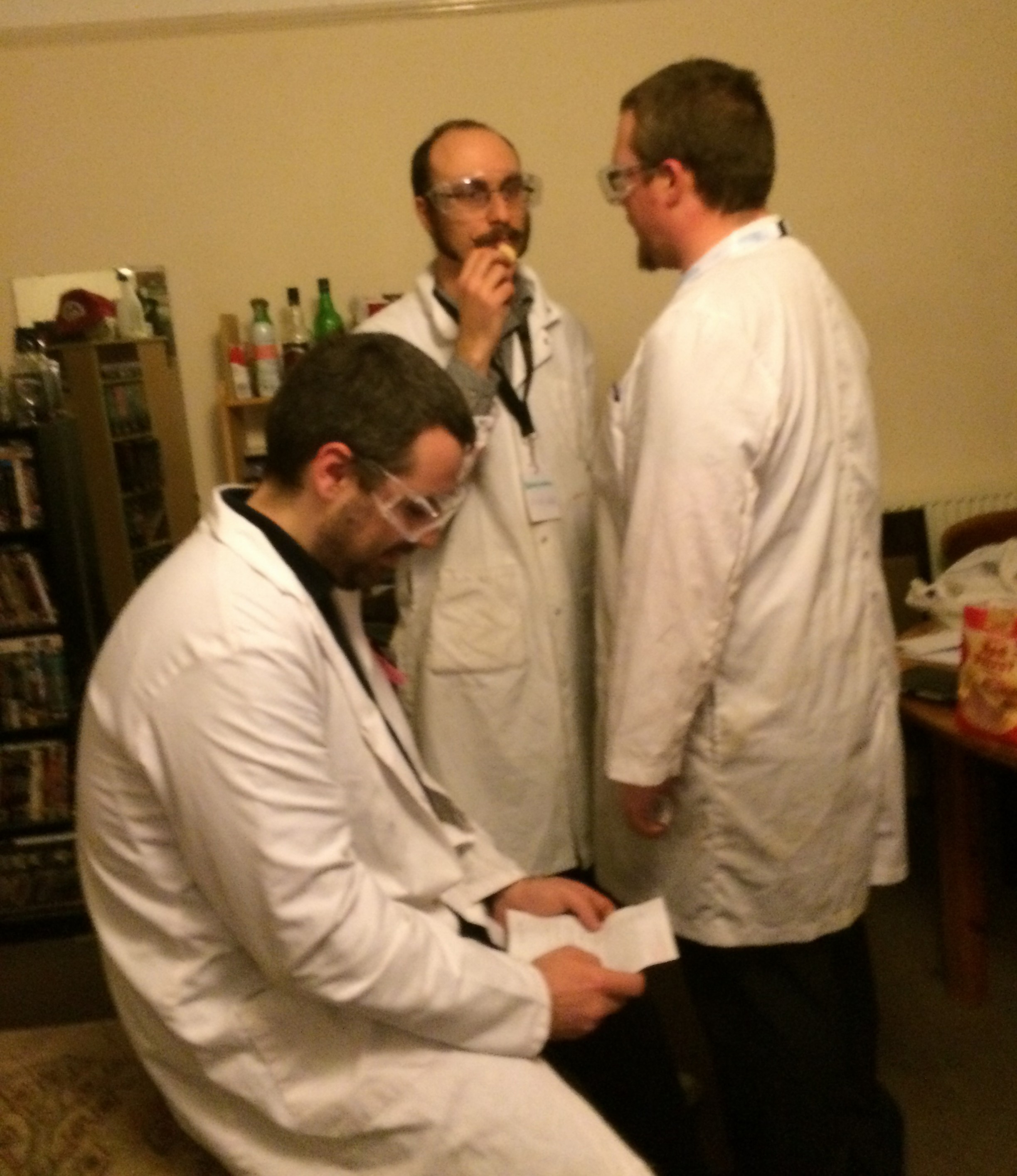 A lot of the game was pacing and pondering, but that’s kind of the point. We discussed free will, whether we could train criminals to be minders and replace the 12 who would die in Cumnock in two months’ time. Whether telling a UN ambassador not to get his plane in the 1960’s would then invalidate all the printouts after that. Dörflinger was the first to assume there was some kind of negative agency behind the machine. Simms spent a while with everyone aware he was to confess something but no one knew what. Once we found out someone had tampered with the machine and died, he revealed that he’d killed a Russian spy who posed as a cleaner. The man was pushed into the workings of the machine. Of course, Chandrakar and I lost our shit at this news. How dare nobody tell us? Was it cleaned afterwards? Apparently it was, although not everything could be recovered. Maybe that red ink… It wasn’t worth thinking about, we were back to our heated discussion about cause and effect, about whether we could change anything at all.

Dörflinger pointed out that we were ignoring the fact that the more we questioned the machine, the more we were getting personal predictions of the future. We scoffed at his attitude because it was all just wires and magnetic tape, but we couldn’t really deny it. Before each run of the machine people would guess whether the predictions would be for today or for the distant future. As Takahashi, I optimistically kept saying that it would be a far future one as we kept getting present day predictions and statistically we should have received ones from dates other than 3 July 1950. We really should. 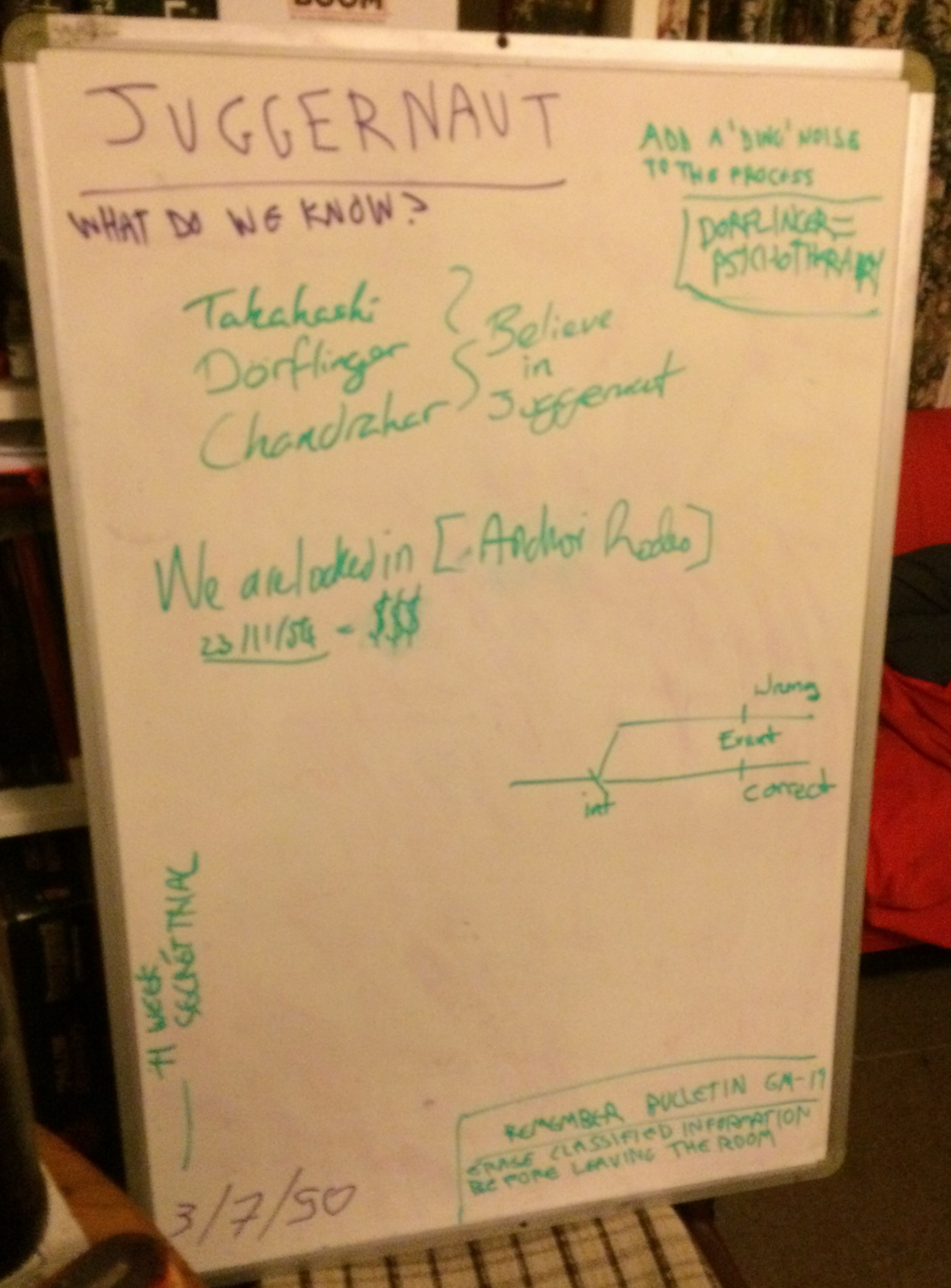 Chandrakar, one of the believers in the machine, spent most of his time trying to organise the cards we’d pulled from Juggernaut into some kind of order to find a pattern in them. When we had an ink blot on one of the cards he decided he needed to replace one of the parts of the machine so for the first time we actually interacted with more than the card-drawing mechanism inside it. Pictured below is Chandrakar with one of two replacement parts. 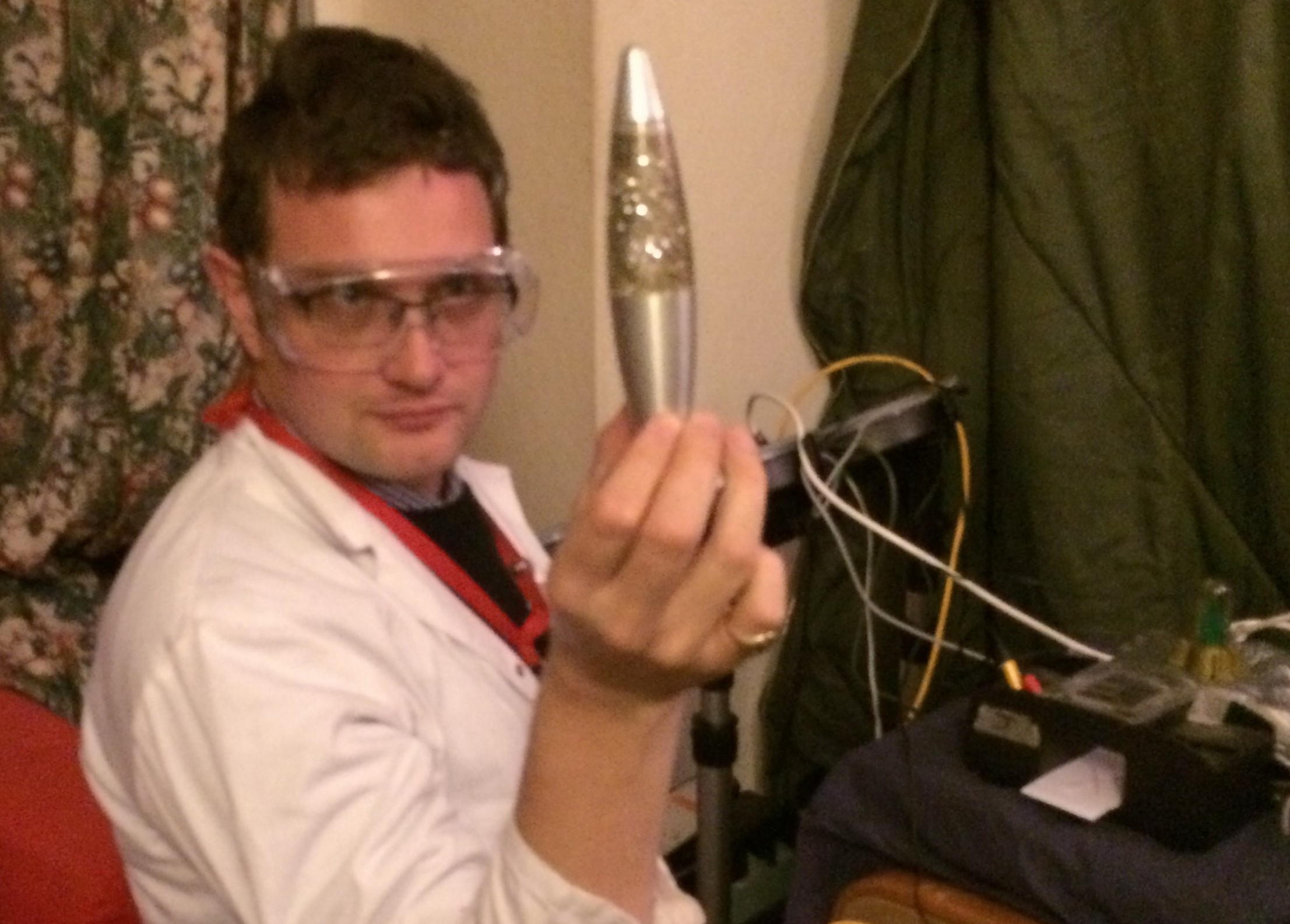 Despite being an engineer, Chandrakar drew a card saying that he would be pleading to the machine, that his cries would go unheard. Things were shaping up a little oddly. The end… I won’t spoil the events which led to it, but at the right point, I started looking out of the window and asking questions about the base’s missiles. We had to hit the decks once when things went a little Skynet, but then the deck had run out. In theory the deck running out ends the game but where we left it wasn’t great and Chandrakar hadn’t pleaded in front of the machine. The locks on the doors and windows hadn’t been released yet. We just kept playing and assumed that Juggernaut kept us sealed in while it was doing… something. Chandrakar took the bullets from Van Der Meer’s gun and tried to sabotage Juggernaut. He was at the mouth of it, preparing to detonate as we all took cover… We cut to black.

At the end of a game like this, I gather it’s good to have a wind-down. We calmed down, relaxed and discussed our characters, what they thought of each other and the experiment. Juggernaut is a short experience but the deck of predictions can be mixed and matched. I printed them onto cards, cut them out and wrote the numbers down in different ways, creating the random deck of whatever Juggernaut told us would come true. It was short, simple and a really fun experience. The lab coats and machine were not essential to the story but added a fun sense of immersion as we paced around, arguing about what would or wouldn’t happen, making fate come true for everything set on 3 July 1950 as we went. You do need a group willing to play out the events and incorporate them into their characters as it goes on, even if it seems unlikely at first. Lee had a few problems with the, “You Will Confess” prediction he had, but a bit of coaxing from the rest of the group brought out the confession of the cleaner’s death at his hands. 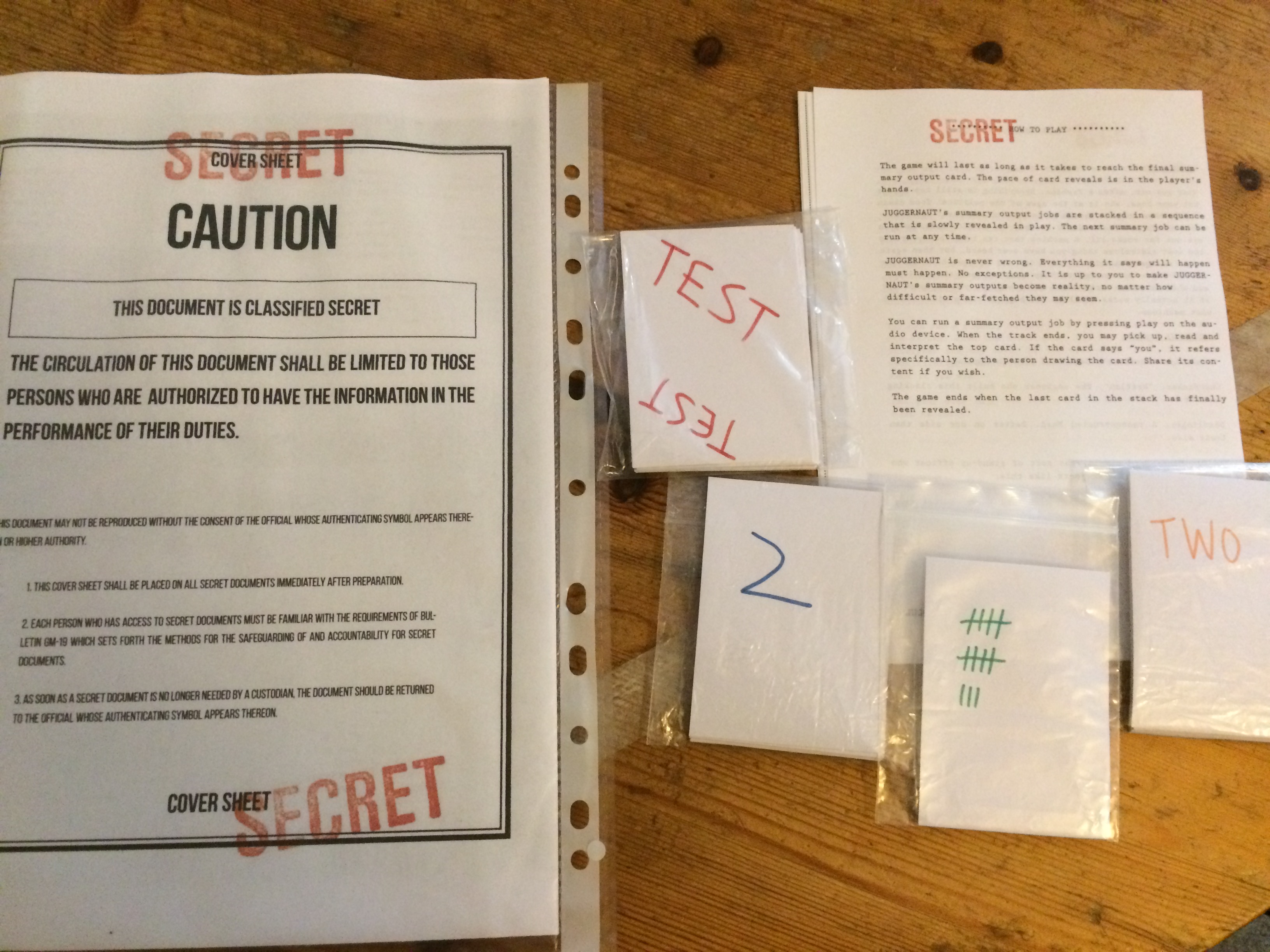 Juggernaut is currently £6.62 on DriveThruRPG  and personally I reckon even if this is only played once that’s worth it for the experience. That’s less than a cinema ticket given you’ll probably have a couple of hours of a fun story with five other friends. For a little more you can buy physical copies of the cards to help the immersion rather than printing them out yourself. Try it out and see whether your test committee can have a better change of understanding Juggernaut than we did.
Good luck.

WE ARE HERE TO SEE THE EVIL WIZARD KORMÁKUR
Be the first to comment!
Leave a reply »