WE ARE HERE TO SEE THE EVIL WIZARD KORMÁKUR

by Charlie Etheridge-Nunn on December 4, 2015 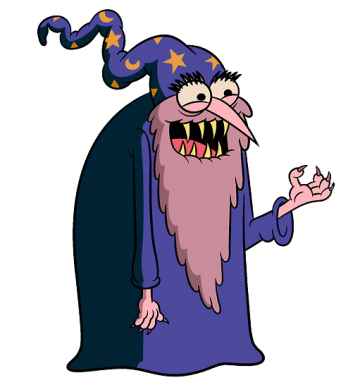 The Servant was yelling at the Hero that the lizardman he was facing off against was a sentient being and not a monster. The Hero didn’t notice under the noise of his own voice, he swung his sword and decapitated the poor, confusing lizard. The Servant shrugged, wandered off and went back to planning the demise of his master and the looting of all his possessions. Hearing a noise he hid up a tree and saw The Diplomat carrying a large jar full of teeth. The strange man put the lizard’s head back on and the pair talked, just out of earshot of the Servant. This wasn’t likely to be good, unless one or both of them could be persuaded to kill The Hero.
Meanwhile, The Lady prepared her poisons, aware The Hero didn’t have any clue about her true intent…

We Are Here to See the Evil Wizard Kormákur is a short RPG where players are all looking for the evil wizard Kormákur, they’ve found his lair but he’s not home. They then play out scenes until no one has a grievance; whether that’s a peace brokered, Kormákur is killed or Kormákur only has allies remaining. Each player is dealt out two cards; an Identity and a True Nature. Each of these has actions and each player takes turns pointing at another, picking an action secretly from their cards and resolving it with the player they pointed at.
In this game:

We all introduced ourselves and answered a question on our cards. I was serving The Hero, for instance, acting as Kif to the loud, blustery Zapp Brannigan of a Hero. Well, he was worse as it was determined that he was pretty much Brian Blessed in a loincloth. Ugh. He was audible throughout the forest because of his loud boasting which never stopped.
For example of a turn, Jacob was the player who lived furthest west and therefore took the first turn. He pointed at me and said we would share a scene. He picked Steal and I picked Lie. We declared the actions we were taking simultaneously and played out a scene where these two actions intersected, bargaining to nick The Hero’s possessions when he was otherwise occupied. There were other actions; mine were: Hide, Lie, Kill (when killing is necessary). My True Nature said that I was the Minion of Kormákur. My actions on that card were reveal (which meant I told everyone what I was and could use the other actions), then hate (my allies, enemies, Kormákur but always myself) and sacrifice, which I could do out of my turn.

In this game, none of us had names, only roles. The world was minimally-made, but it felt real enough while we were playing through it as we added elements like the lizardmen, the wizard’s fatal addiction to and digestive problem with eating human teeth. His tendency to shapeshift and surprise people which was how I didn’t know who he was the first two times we met in the woods.
There was one point when The Lady was wagering with The Hero where Jacob and I wondered what her motivation was. If Lee had mentioned it, we didn’t remember. I quickly called up the file for the game on my phone and realised that while The Hero was there to kill Kormákur, The Lady’s goal was simply to gain power. We suddenly had a feeling The Hero wouldn’t be around much longer. Sure enough, he was poisoned shortly afterwards. Then The Lady was killed by The Rustic over their petty land disputes. I revealed myself to The Diplomat, just so I could use more actions (mainly Hate which sounded so brilliant and pathetic my character should really have been in a game of My Life With Master).
The Diplomat and The Rustic both decided to reveal their identities at the same time which had a great scene of The Rustic coming out as the pen-pan/aspiring lover of Kormákur and The Diplomat was the evil wizard himself! They’d found each other! Oh happy day!
The Outsider discovered the secret weakness of Kormákur which meant he could be killed! The only problem was that The Outsider couldn’t actually kill him, instead he had to communicate this fact to me as the only remaining person who might be invested in killing him. The Outsider’s main action he could use was to confuse me. Steve did a very good job of being confusing, as pictured with his attempt at using the confuse action on The Lady:

I knew my character could go either way with Kormákur at this point. He hated him and hated his lot in life. It was Kormákur’s turn first though and he used the ‘destroy’ action on The Outsider. I decided to throw myself under the bus and used my ‘sacrifice’. Kormákur blew me up by mistake, then the lizardman declared he didn’t have any beef with Kormákur who was able to live happily ever after with his lover.

It was a short game and really easy to figure out once it got going. The rules themselves are shorter than this review, after all. There aren’t dice rolls, the mechanics are fairly simple in when you can kill people as five of the six roles have actions which do this under certain conditions. It’s fairly loose and freeform, making for an RPG which can take place in under an hour… less if your group are quite bloodthirsty. We were feeling out the rules and roles so it took a little longer than I expected it would.
The game itself is free and a nice warm up. You can download it HERE