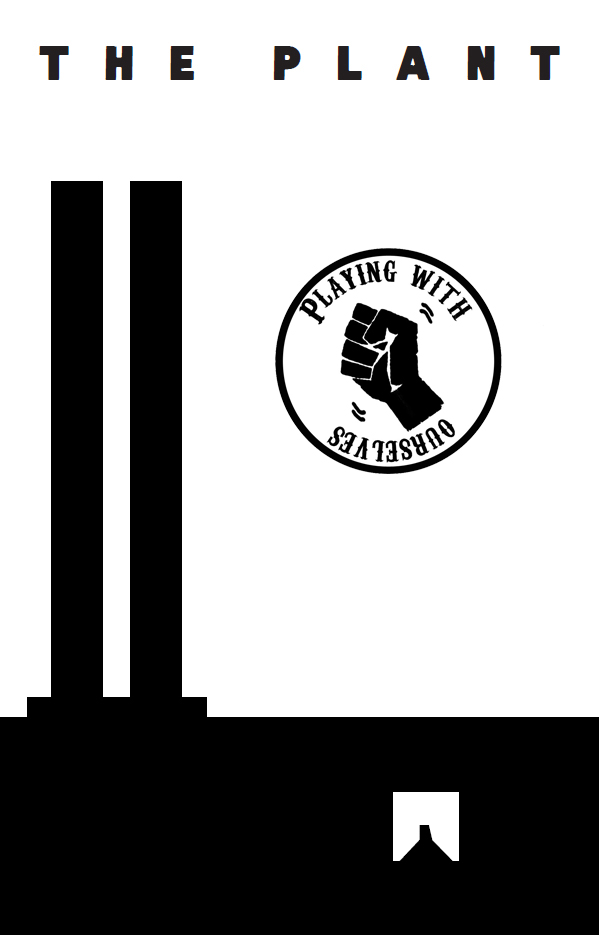 Your daughter is in the plant. You are going to find her.

That’s it. The simple start to the game. You need to prepare a few things first but stick with it. You need index cards, a pen and while a token to represent you is only optional, I recommend it to show your gradual descent. In The Plant, you’re going down into the dark depths on a quest to rescue a loved one, like Orpheus. In this game though, your Hades is all the accumulated rust darkness and memories of past regrets. It looks nice and straightforward, but as with the better single player games I have tried out, there’s depth beyond the components.

You follow the PDF through the instructions, creating a deck of details and a deck representing the plant. The details are all invented by you, but there are rough formats and examples provided. Three plant cards have “Down” on them and the rest are numbered with letters on each edge. You can have up to ten of these cards depending on the length of the game you want. I played twice in one evening with seven and eight cards respectively with each play taking a little over half an hour. The game says to take your time with answers, and as I went further, I saw the narrative of who I was, who my daughter was and the world I inhabited.

The first play-through was good but short, I had too few details appear, I wasn’t sure if I was playing it right, so I’ll tell you about my second attempt.

My character walked through the ruins of the coil room. This was a small town gravitating around the plant back in the day, back when it all worked. I used to work there and remembered my attempts at exerting control over my environment; banning smoking in the courtyard, around the big old tree. The people there never looked at me the same. Even Jenny, my first love from school. I’d always held onto the dream of her, even over my own wife. Thoughts never shared outside of the walls of the factory, never acted on. I walked through the courtyard and the break room, remembering the wall of coldness they would put up around me, even when I brought my daughter here to see what her dad does. She didn’t notice the hostility towards me. Instead, she was in awe of the giant tree.

The trunk room was a tangle of pipes, lines of grime marking out how high the water level used to be. I found a baseball cap in the blackened water amongst old leaves and discarded equipment. It had been mine for years until I gave it to my daughter. I tried to clean it off as well as I could on my jacket and continued down the stairs into the darkness. The tunnels went a long way and my phone’s light didn’t reach far enough to hit the end. Pipes lined the walls, criss-crossing the hall and blocking the way. I decided they didn’t look like they worked and tried to squeeze through a gap, only to knock one open. A burst of hot steam scalded my legs and I hit the ground with a noise loud enough to echo through the factory, alerting no one at all. After a few minutes on the floor, I dragged myself to one side, slumped against the wall with the memory of something dark and shameful hidden away.

The crawlspace, readily available from here and carefully I dragged my injured legs through. It sounds awful that I used to sneak in there and listen to the managers; that was how I knew about the disciplinary ahead of time, how I managed to see my love talking to my manager. She was concerned about me and what all the hours I put in alone down here were doing to me. 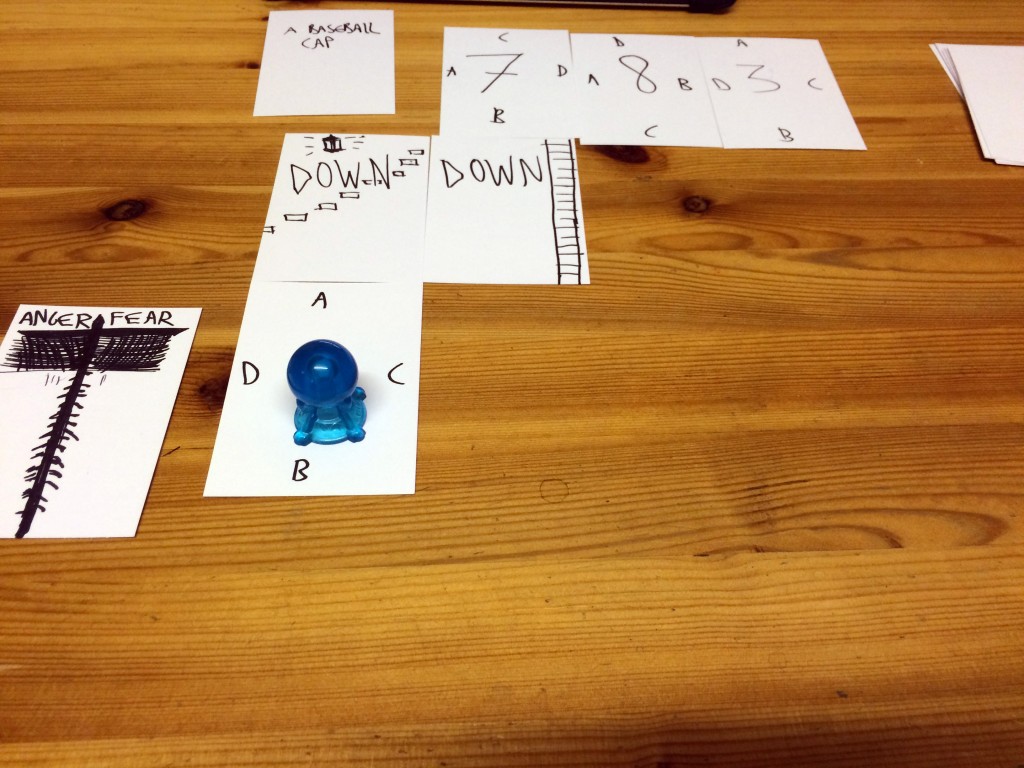 From there I crawled back to my old office, the old control room. Abandoned, as I was back then. It needed me and I needed it. Amongst the ruins I feel almost at home, after all, this was a sanctuary for me during those long, sad years. I probably imagined Jenny talking to the manager about what I was like back then. I kept it all hidden well enough, didn’t I? I must have.

I continue through machines and faded warning signs. It’s almost like a trap, albeit an unintentional one. Metal cages like empty shells. The thought that my daughter may have stumbled into something dangerous and died months ago without anyone to save her is overwhelming for a moment. I weep amongst the stilled spin-blocks, then do my best to compose myself and venture further into the depths.

The factory machines have been stripped away years ago, leaving outlines of grime like ghosts. Pushed up against one side is what can only be described as a nest. Trash surrounding a mattress, the frame of an old machine pulled over to protect the owner from the elements. In amongst it, my daughter. She’s there. She’s been there for some time. I should have looked before, I should have been here. All these weeks and months have passed. She was never lost, she only has good memories of this place which consumed me like an illness. This is a haven for her, a place away from me. She looks feral, disorientated, almost like she doesn’t recognise me anymore.

My daughter is in the plant. I found her, but in the end, we were both lost. 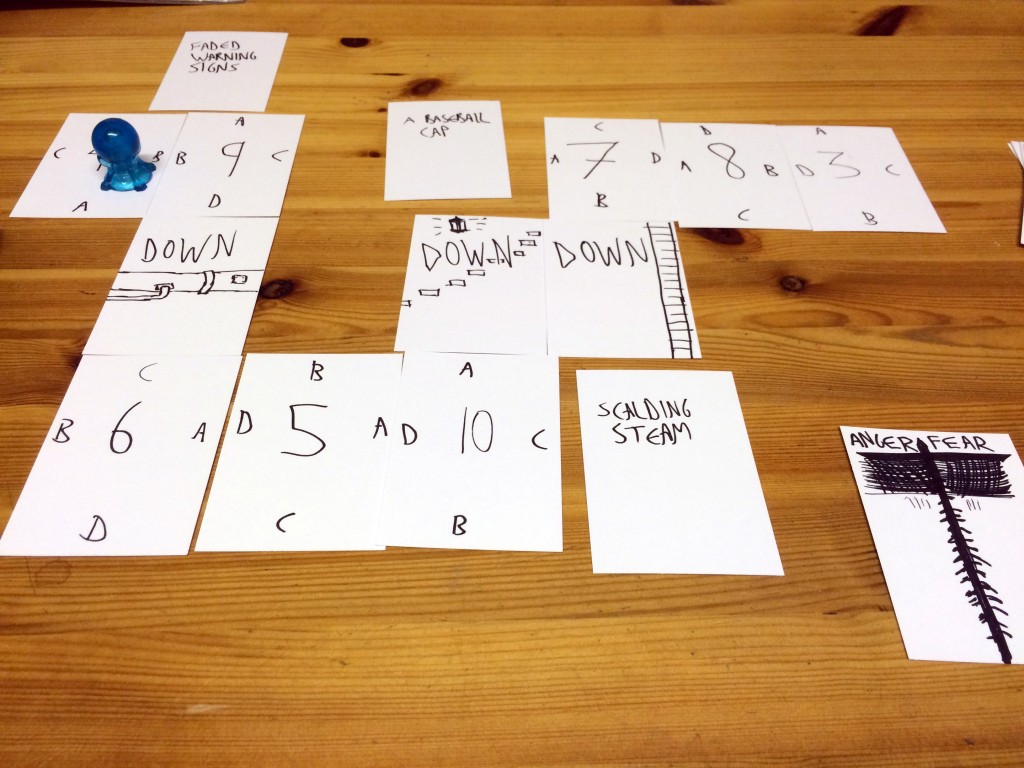 The Plant is a far sadder game than I initially thought. It’s steeped in nostalgia and regret. You used to be a part of the plant when it was a living organism and you used to be part of your daughter’s life. Like a lot of these games, you have no real context for your character apart from what you bring to it and how you react to events as they unfold. My first character was looking for a daughter with anger in mind after some big argument. He was stomping through the plant where he’d been powerless and the more he was there, the more points of fear he racked up. My second father was more fearful from the off. While the plant was going it was a refuge from himself and his unhappy home life. It wasn’t clear what made his home life miserable, but there was the woman he loved and alienated back at the plant, around him every day. His daughter had seen it as a safe place when she was brought in and from his tales of safety, no wonder she sought it as a sanctuary. Each time you draw a card, you turn to a page in the pdf and it asks you questions about the letters on the edges. You write down your reactions and go from there. As my game went on, I answered the questions and drew the details which slowly led to the realisation that my daughter had been there for some time. I didn’t know why she had run away and why she was so lost when I arrived. My fear was too high, so very high, dictating the way the end went. The phrases are accusatory, telling you what your life was like, what memories you have of the plant. They’re almost Chris Claremont level and then have bold questions which tell you to draw a detail card and then ask why the contents of the card make your character break down and cry. The details could be elements of the factory, memories or even sensations.

Even preparing the items for the game, I wasn’t sure what would happen with them or how different the playthroughs would be. Both were filled with pathos by the end, there are more endings than the two I encountered, possibly more positive, possibly not. The next time I try The Plant, I’m going to attempt and take longer, maybe make some proper prose out of it and see where the story takes me.

The Plant is a free game; you need 21 index cards, a pen and maybe a meeple or something to represent your character. The game itself can be downloaded here.

WE ARE HERE TO SEE THE EVIL WIZARD KORMÁKUR