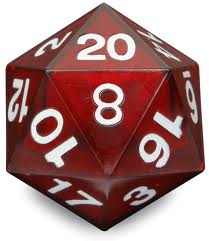 Howdy Greg’s, I’m here to quickly (i.e. not rubbish up with my interesting use of grammar and the written word) introduce our most recent new edition to the Who Dares Rolls family Mr Charles Etheridge-Nunn. Charlie is going to be covering RPG’s and other goodness for us, so without further ado let me hand you over to the man himself. 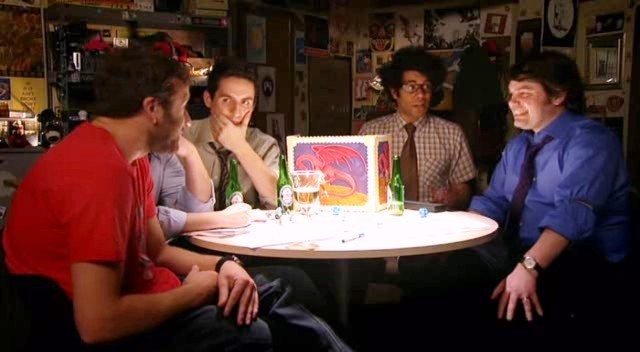 Role-playing, eh? You know, that thing with the dice and the maps where people pretend to be other people. It all seems a bit odd. There have been several references to it in the popular culture from The IT Crowd, Big Bang Theory, Key & Peele, even Buffy had a few of the characters role-playing in the final episode the night before their big final battle, Joss Whedon even said the Traveller RPG directly influenced Firefly. It’s something which is everywhere, yet often misunderstood.

I’ve joined the Who Dares Rolls crew specifically with the goal of showing you how good role-playing can be, including the experiences I’ve had and recommendations of games to try out. It’s an amazing hobby and an experience I’m insanely excited about sharing with you.

So what is role-playing? I’ll cover this quickly. It’s a tricky question as a role-playing game can be seen like several different things, it’s a fairly mercurial subject to define as any description may not do it justice. Most role-playing books have a good stab at it which is often fitting for the particular game. A brief overview should be enough until I get to a specific game.

One of the people who trained me to run role-playing games said that a role-playing game should be the best book you will never read, the best film you will never see. It’s a story, told in one or more sittings between a group of people, often with one acting as the Storyteller (aka Dungeon Master, Games Master) or as the host. They know the rules and establish the world, other players have a character who is theirs and experiences the story.

For instance, if I was running the Lord of the Rings movies, I would be Peter Jackson while my players would be Aragorn, Legolas, Gimli and so on. Some game designers like John Wick have called this, “The Fifth Wall,” where the audience for the story is also the actor.

Role-playing games come from a few different places, which is why they’re not easily defined. The first is war games; starting with Chainmail, Little Wars and other tabletop war games, there was a change from miniature armies to individuals fighting one another. Then they were fighting the environment, overseen by a Dungeon Master. Then people started wanting progression in their characters. From there, narratives grew from the adventures. Dungeons & Dragons is the most famous one of these, with people such as the creators of Futurama and Vin Deisel are known players of it. As time went on, more games came out focusing on different ideas. Vampire: The Masquerade turned vampire tropes into different ‘clans’ taking part in shifty politics and influencing vampire fiction ever since. The Generic Universal Role-Playing System (GURPS) worked out ways of using one numerical system to reflect anything from people who jump through realities, super-heroes and even legal or medical dramas.

As the medium evolved there were attempts to create a unified gaming system which anyone could use, “The d20 System,” as well as the growth of story games which came more from improv and storytelling than fighting, miniatures or complex systems.

I’m sure most of us here have played tabletop games or video games and role-playing games aren’t a million miles away from those. At the very simplest level it’s a reason to have fun with some friends; maybe have a drink or two, chill out and have a laugh.

At it’s best then it’s like my Storytelling mentor Andy said; the best film you will never see. Like a book series or a TV show you’re hooked on, you’ll watch the progression of your characters and stories over weeks, months or even years. Worlds will change, dramas will unfold and threats will be solved by the cast. It’ll be better than mainlining Game of Thrones or Dr Who because the main cast are all characters you made and are personally invested in.

There’s one level further beyond that, the sublime point where a role-playing game tells you something beyond a story. A game of Dog Eat Dog might tell you all about colonialism and the subjugation of a native populace. The Quiet Year is a game where you all draw a map together, but it’s all about communication in a small community. We learn about ourselves, our characters and how we might react in a given situation. In role-playing games I have stopped werewolves from invading London. I’ve burnt worlds and enacted coups on post-apocalyptic theme park dictatorships. Then I’ve put the dice and character sheets away, said goodbye to the monsters and madness for a week and carried on with my normal life.

As this is a whistle stop tour of role-playing I’ll introduce you to a couple of basic concepts which I’ll be talking about more soon. 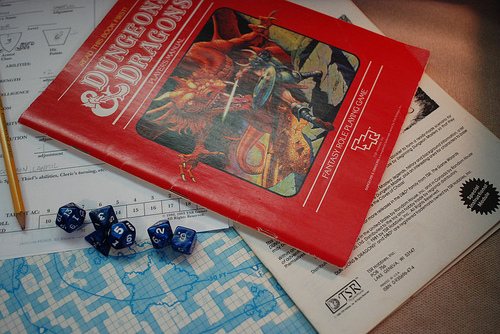 These are the type of games which started the hobby, often (but not necessarily) with big rulebooks, a focus on fighting and long-term play. Dungeons & Dragons and its’ hot cousin, Pathfinder, are perfect examples. You play characters who start off as lowly adventurers guarding caravans or killing oversized rats, then you gain levels and magic items as you continue to play. Vampire and the other World of Darkness games experiment with personal horror and mental or social conflict. You are the monsters of horror movies, turned protagonists of their own strange stories. Call of Cthulhu is less based around personal progression as it is survival. Personal favourites of mine include Alderac Entertainment’s fantasy pirate and samurai games 7th Sea and Legend of the Five Rings, as well as Crafty Games’ Spycraft.

The ‘traditional’ side of role-playing tends to include many books to expand or change people’s games. When the open source, “d20 System” came out there were about a million books flooding the market which caused a massive contraction of the industry, something which has only recently been recovered thanks to the revivification of D&D, World of Darkness and the prevalence of digital platforms for role-playing books. 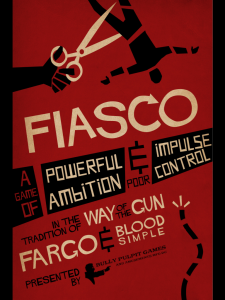 Vince Baker, the designer of Apocalypse World (we’ll get to that very soon), says that a role-playing game is a conversation. Story games take the fundamental rules of role-playing and tinker with them in a way where often simpler mechanics can tell a specific story. Fiasco is a great example, one you can see a video of on Wil Wheaton’s Tabletop. It’s a game of Coen Brothers style plots where people have bad ideas and players (without a Storyteller) narrate the glorious car crash of ideas. The Quiet Year uses a map drawn by players to show a year in the life of a post-apocalyptic community. They tend to go towards one-shot or short campaigns. Digital platforms have been great at giving us places to acquire and share stories of these games.

Because of the experimental nature of these games, quite often they question the need for a Storyteller, or certain rules, or dice. Some use playing cards for resolution (God-King, Prime Time Adventures), others use drawing a map (The Quiet Year), mix tapes (Ribbon Drive) and so on. They’re fascinating games which tend not to make a long story to get invested in, but show us something really cool.

This is just a whistle stop tour, so all the things I’ve mentioned now I’ll go into soon enough, starting with Jason Morningstar’s game of cowards, traitors and murderers in the American Civil War; Carolina Death Crawl. 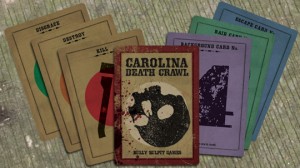 I’ll leave a couple of things for people who are interested by the sound of these games to check out. One of the biggest issues I hear from people is how to actually get or join a gaming group. This is a social activity and one you need to find people for. I conscripted friends from secondary school, some lasted and some didn’t. As time went on and I worked in a comic shop, it became easier to add folks to my ranks. The good news is, that’s not the only way any more, thanks to the glorious internet.

Google Plus. I know, I know, only five people use G+ and I’m one of them. Still, Google Hangouts are a brilliant way for people who are not in the same geographical space to role-play. Unlike Skype it’s free to have multiple people on one video chat and you can even use apps within it to sketch out maps. There are even dedicated programs like Roll20, which allows you to add dynamic mapping, dice rolls, in/out of character chat and backing music. There’s one community in G+ which is all about Tabletop RPG Hangout groups, so you can put a shout-out if you want to run a game or join someone’s that they’re offering. Look on YouTube for examples of play.

Obsidian Portal. Obsidian Portal is an interesting site acting as half RPG social network, half storage space for your game. A Storyteller can put up all the information about a game they’re running (here’s one of mine including maps, wiki-entries, supporting cast members and players can add their characters). You can show where your group is and whether you’re open to more players, so people can browse and join games if they want.

Meetups. Meetup is a site I’m only just starting to get into. It’s for groups of people to gather around any given purpose. There’s a specific London Indie RPG Meetup Group who are great for introducing games to people. If you don’t want the commitment of a gaming group, these kind of gatherings are fantastic.

Conventions. There aren’t a massive amount in the UK, I mainly go to Dragonmeet, but there are role-playing games for people to take part in there, made specifically for a short convention session so you can dip your toe into the RPG world.

There’s a lot to take in and this is just the surface. Come with me and over the year I’ll show you some of the fantastic stories and experiences which can be had through role-playing.