by Charlie Etheridge-Nunn on February 4, 2015 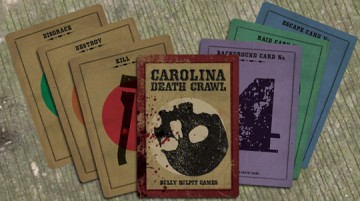 A competitive role-playing game of the terrible things men do in war for 3-4 players.

I know I shall take this letter to the grave with me. My wife and children, my grandchildren… they must never know what I did, but as I get older, the ghosts of those I knew in the Civil War get louder.

Heaven is not my destination, for I know the things I did in those swamps have marked my soul and that of those around me. I am the best of a bad lot, only the last.

Carolina Death Crawl has a good pedigree, it’s written by Jason Morningstar of Fiasco fame. Where Fiasco has playsets which take players through the stories of terrible people in any situation (ie; superheroes, a seedy motel, a submarine). This game focuses on one specific time, one specific event and knows roughly where you’ll be going. It creates some fascinating experiences and some purposefully terrible ones.

The setting is the American Civil War, in 1863. Each player takes the role of a North Carolina local, fighting for the Union in their home turf which is currently controlled by the Confederates. The characters, the backstory and the events will all be dictated by a deck of cards. My own set, shown below, were printed on paper and sleeved using standard-sized Ultra Pro sleeves. There are online services which print out actual good quality ones. 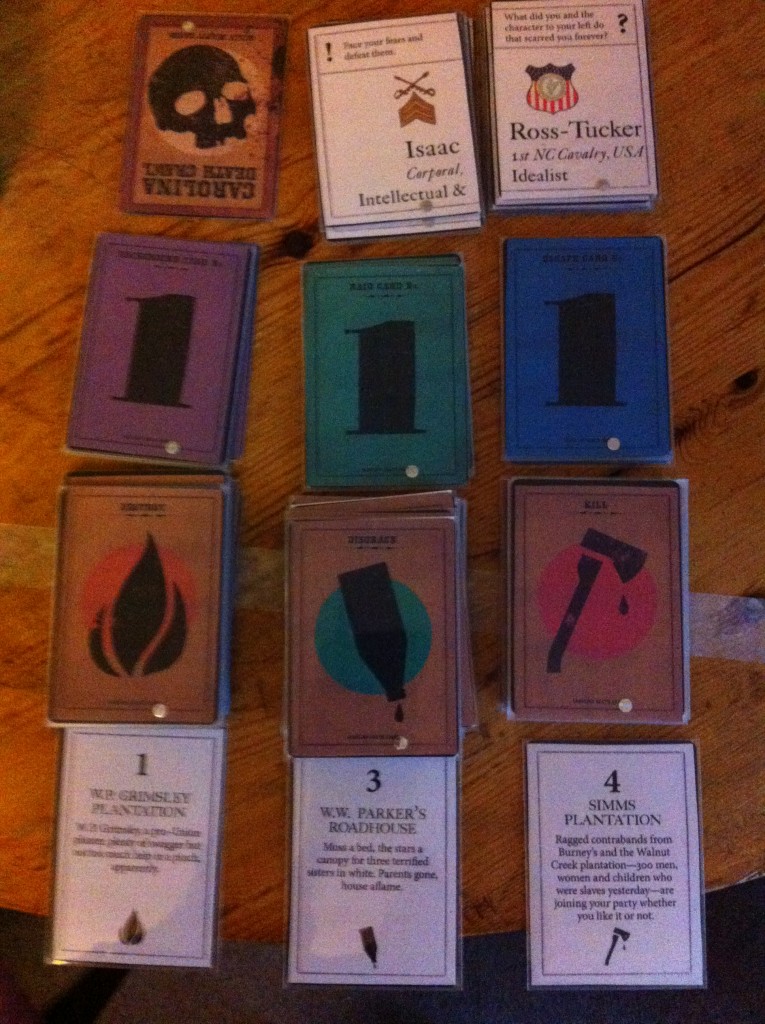 We start off with the characters, the people to your left and right decide your first name and last name. Those dictate your ranks. I was Private Robert Shanks, Scofflaw and Deserter. You get a question and a statement to act as prompts during the story. Then everyone takes turns in character reading one of four background cards to explain the state of the war and current events.

Our journey was supposed to take us to the Rocky Mountain Depot, but we were lacking supplies and on the other side of Confederate-controlled territory. We came across Greenville early on an planned to take it in an organised fashion. I know not what went wrong, but we charged the town as people were going about their morning business. Corporal Maybank ran down a local madam while Dunham’s overwhelming charge was too much for the townsfolk and even some of our own men. It was a slaughter. The bugler tried to get in on the action, burning down the telegraph station so no word of our attack could get out.

“The looting was rife from our men, after so many had died and the town could not look after itself. I admit I was part of the looting, having entered the bank and attempted to liberate a jewelled necklace from its owner. She fought back and in the struggle my pistol went off, fatally injuring the woman. I left her to die from the shot, taking the necklace and fleeing before I could rob the bank, leaving it to the other soldiers.

The next step is the raids. The soldiers fought their way towards Rocky Mountain Depot, the target for their mission. By ‘fought’, I mean murdered, pillaged, drank and burnt their way from town to town. Players take turns reading out a Raid card for each location and then describing briefly how they murdered people, destroyed things or disgraced themselves. Depending on their choice of those three things, the player draws a card from that respective deck, building up a hand of horrible events to play on themselves and others when the game beings.

Yes, all of that was backstory, but the character creation and the inciting incidents involve enough storytelling that it feels like you’ve actually accomplished (horrible) things. It also makes sure that all of you have blood on your hands, something essential to the theme of this game. You are bad people doing bad things. Your sins will probably come home to roost in the North Carolina swamps, but that’s okay, you’re all in the quagmire together.

The Sims Plantation was an unpleasant place, even with the storm clearing up. We rained death upon them, eventually rounding up the couple who owned the plantation and their two young sons, not even of an age to be with us. The newly-freed slave woman asked them to sing for her, then slit the throat of the plantation owner’s wife. Pembroke shot her hand off in retaliation and I made good of the rest of the family. The remaining freed slaves attacked Pembroke and I admit I let the man take his lumps, preferring to save my own skin while the fighting went on. I returned for the looting, of course. 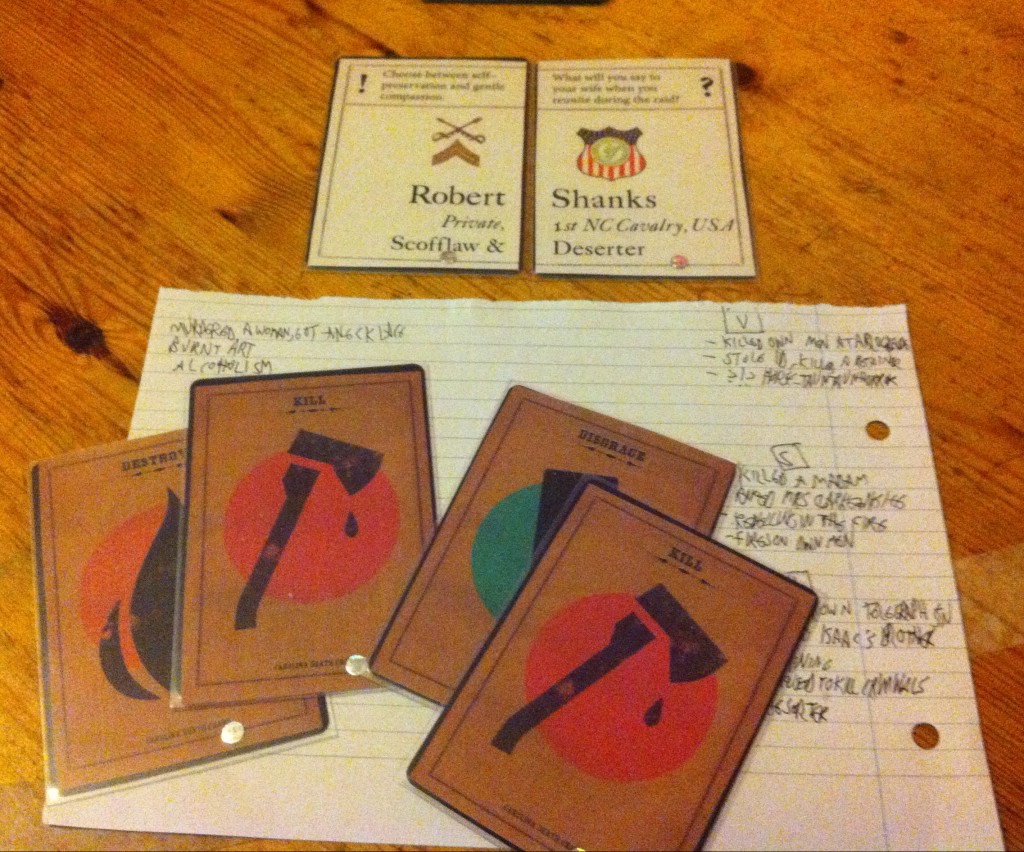 Once the backstory’s done, you’re fleeing for your lives from Rock Mountain Depot, all the way back to New Bern and safety. The highest ranking player reads out one of four Escape cards, establishing where we’re at, then each player takes a turn going through a scene where like before, they kill, destroy or disgrace their way home. In doing that, you draw more cards for your hand, but you also start playing them now. Those cards in your hand have little descriptions on them and numbers. You play them on yourself and others, scoring the point values for yourself for very good reasons I’ll get to shortly.

One of my favourite scene cards is this, “You recognise the lone rider by silhouette alone. Who is it, and what will you do to him once you pull him off that horse?”

I love that statement, it’s so specifically leading, yet so open to do whatever you want. It is a, “Kill” card though, someone needs to die, even if it’s just the horse. If you play it, you carry on narrating unfettered, with the other players describing their actions and dialogue as necessary. If you play it on someone else’s turn, you take the reins for a moment, not showing what the card is, but explaining what goes on.

There are prompts on your character cards which can be answered in yours or anyone else’s scenes, too. Mine were: “Choose between self preservation and gentle compassion,” and “What will you say to your wife when you reunite during the raid?” Like the scene cards they are worth points.

What are points worth? Prizes? No, just survival.

You see, you can’t die in the scenes, as terrible as things go, as bad as things get, the one restriction is that you can’t die. There’s a reason for this. At the end of each round you add up the points you scored from event cards and the character prompts. The person with the lowest score dies. They get to narrate a scene where they pop their clogs, then the next round begins.

The dead players aren’t out of action though, instead they are, “swamp ghosts,” whether real or simply in the minds of the other survivors. Those players are encouraged to get up, move around and to talk to the survivors about the horrible things they’ve done. They still use cards to affect scenes, but those ones score negative points for the person they’re played on.

At the end of act two, another person dies. Another ghost to share the responsibility of haunting the group. Finally, with two people left, the final act draws to a close and the final survivor is revealed.

The horses fled the gunshots and we chased them as best as we could with our wounds. They were too fast though and my wounded leg was slowing me down. Eager came back to me, saying that we didn’t need horses to get to camp, he would help me hobble my way home. Eager the moralist, the man who had publicly announced many times how I murdered a child, how I’d done so many terrible things in my short time with him. I couldn’t let my reputation be ruined by him, not this close to home. Not this close to my wife.

“I shot him with the gun I’d murdered his father with. A shot to his stomach, leaving him a twitching mass in the swamp. I kicked him into the water, then stumbled to New Bern, surprising those who thought we’d all been massacred at Rocky Mount. 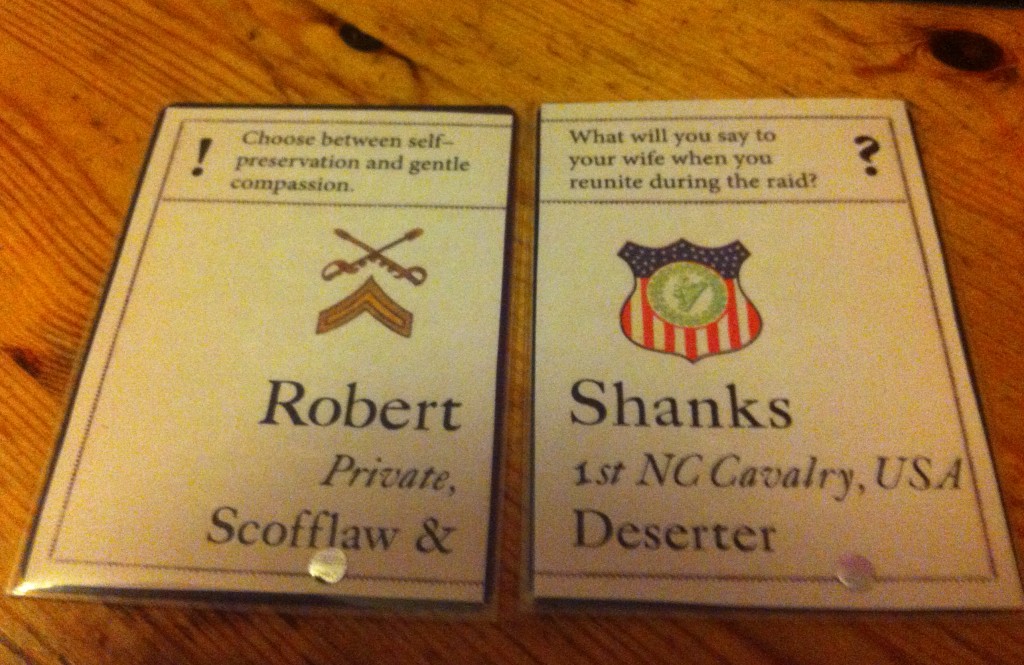 The last person reads the last Escape card. In my game it was Robert Shanks. He lived all the way home, the memories of his past horrors were covered up. The bugler, Pembroke Eager, was too moral a person, so with him dead, Robert Shanks’ litany of sins went unknown. The bodies sank into the swamp, never to be seen again, but the ghosts would always remain.

So what did we learn from this?

Carolina Death Crawl is not a nice game. It’s filled with murder, with moral ugliness from everyone, even Pembroke and his desperate attempts to stay the ‘good guy’. It took us to some dark places, like the nastiest that Deadwood and Django went and sometimes it’s nice to wallow there for a bit.

Looking back at it for the actual play report breaking this review up (and linked to at the end of this review), it’s… dark. I’d forgotten just how dark it went. I hate my character and everyone he was involved with. They ruined everything around them, but in a really compelling way.

I gave up on The Walking Dead for being a bleak television show which keeps telling us that humanity is a trait to give up on, that there is only despair and violence, that if someone expresses something positive they’ll probably die next episode. It’s relentlessly bleak and you need a release valve, something which keeps the comic entertaining and the TV show a grind. Carolina Death Crawl crystallises that level of bleak madness into a short trip where we are all at our worst, but can then move on. In 3-4 hours you’ve experienced some transgressive horror, can put that side of you back in the drawer and carry on with your life. At the start it tells you that it can go in whatever tone you want, so you could play this as a Fiasco-style comedy of errors or like us, as a terrible series of screw ups solved only by bloodshed.

The card system means that you can play several games and have each experience be different, even though the scope isn’t as wide as a Fiasco. For the price, it’s a fantastic storytelling game, just… make sure that your group are fine with the darkness they will experience.

This game was purchased by the reviewer. You can buy Carolina Death Crawl here