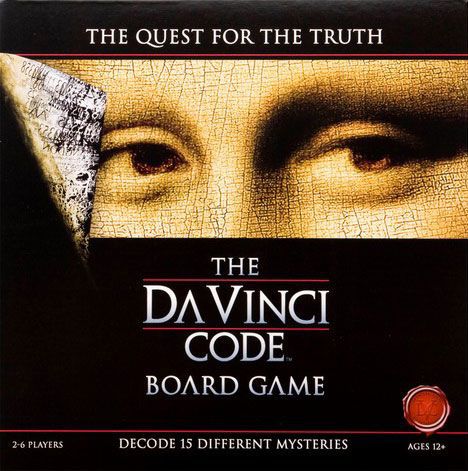 It’s been a while since I’ve played a bad licensed board game from a charity shop. I actually don’t have many left on my stack and hid them so that I would forget they existed. Unfortunately my blissful ignorance wasn’t to last and here I am, reviewing the Da Vinci Code board game.

Unlike Robot Wars, which I’d watched a lot of and Ground Force which I was tangentially aware of, I’ve not read or watched Da Vinci Code the whole way through. When I first bought the board game I also picked up the book, but swiftly realised I couldn’t be bothered spending time reading it.

From what I’m aware of, Da Vinci Code is about Tom Hanks, who is a great professor with Amelie as his sidekick. There’s some kind of albino guy who doesn’t want them to find out that Jesus had a kid… or something like that. It was all hidden in codes by people like Da Vinci for… some reason. I’m not sure. The whole Jesus line carrying on thing was done entertainingly in Preacher and I’ve heard idiots say they believe it’s 100% real. So I’m already prepared to love this game.

The game itself came with a DVD with a trailer for the film and a tutorial which honestly isn’t worth watching the unskippable trailer for. The instructions are good enough to get you set up. 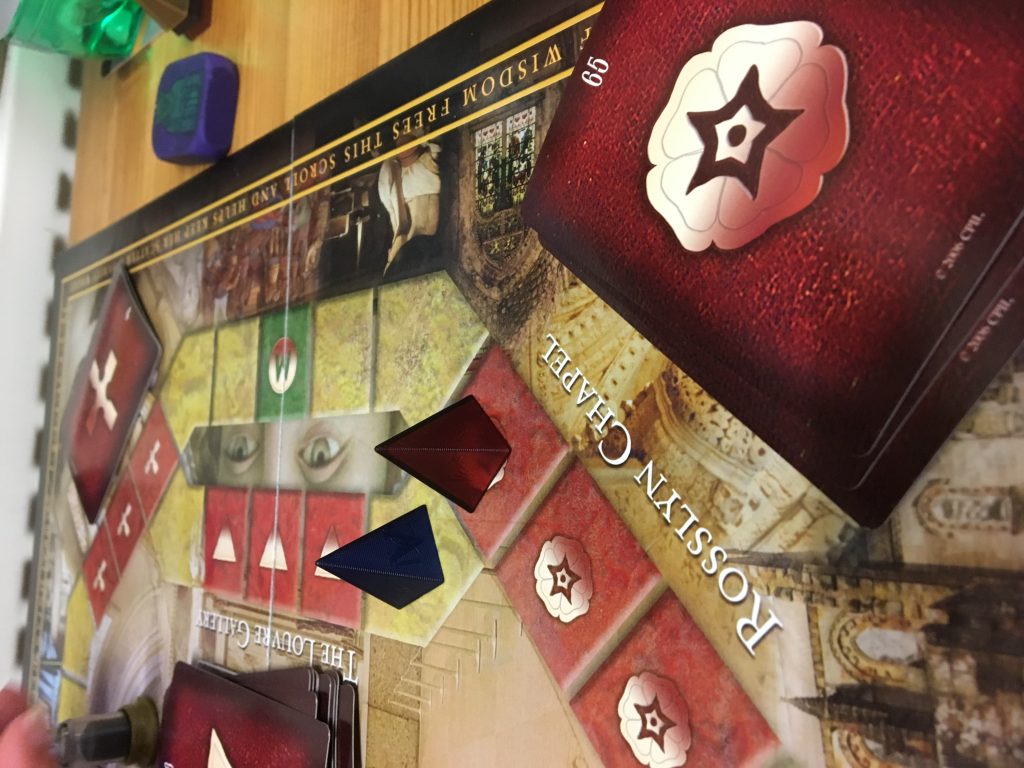 You have these pointed tall pyramid things for player pawns, decoding items (sidebar, decoder ‘wheel’ and a cardboard mirror), a sand timer, die and cards. The cards needed sorting but I’ve played Fantasy Flight Games and this doesn’t scare me. Oh, and you have a notepad of pages for writing notes down. You have a section at the top of the sheet to fill in to find the codeword for the mystery you’re playing. There are several in the book, but you can’t revisit them when you’re done. Think of it like a bit of a legacy game, I guess.

The cards are numbered on the back for each mystery, so you gather each stack and put them in the four key locations, along with at least one taxi and depository card per stack. They’re shuffled and you place the Louvre Library & Gallery decks in the centre of the board, place meeples right by them and you’re ready to go.

“While I was reading the book I believed it entirely. Clever Dan Brown twisted my mind convincingly. But when I put it down I thought, ‘What a load of codswallop.” Ian McKellan

This game actually has a few things working for it, but the first horror we’ll see if that it’s a roll & move game. On your turn you roll, pick a direction and move that many spaces, hoping to end on a research space, the library or the gallery. You can’t choose to stop, so you’ll find yourself occasionally overshooting. There are metro spaces which are all technically the same space and might help, although you’ll be no nearer a research space, at least you’ll be nearer any research space. There are also taxis, which I used mainly to skip backwards far enough to use up all of my movement the way I wanted. 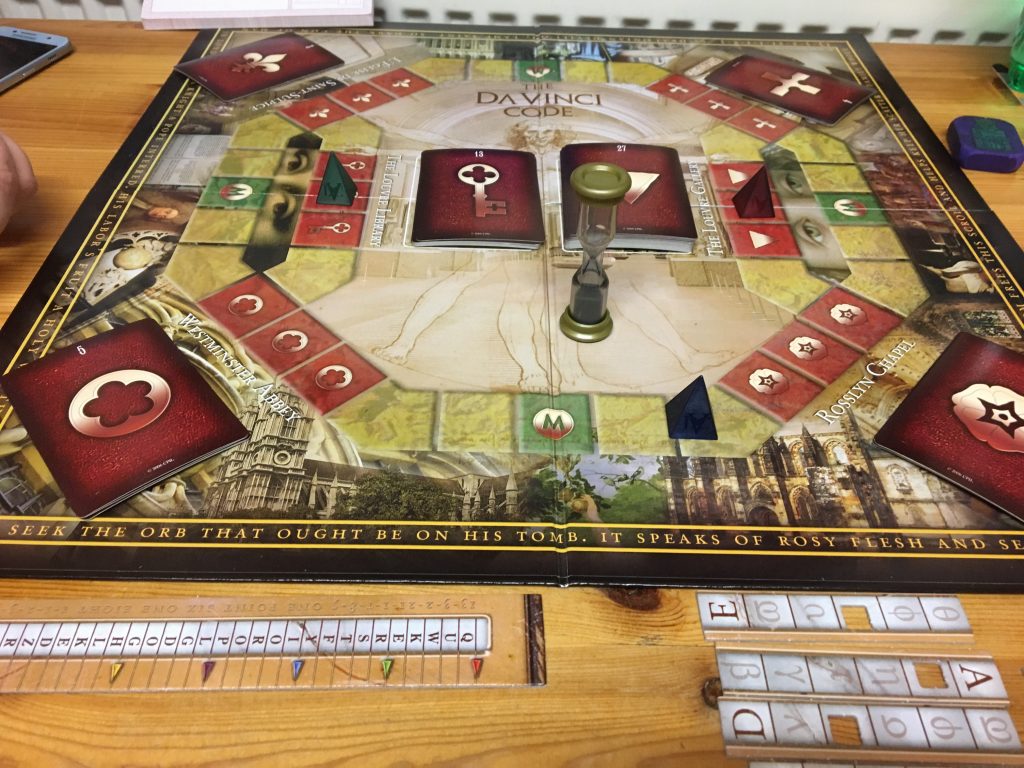 If you’re on a research space you draw the top card of the relevant deck. If it’s got a low number on the back, it’ll be a taxi or depository card which is nice, but doesn’t get you information. If it’s a higher number, it’ll be a clue. They often refer to the exact letters in the code word which you’ll need to fill in and give some kind of historical or cultural reference. They might need the codebreaking tools, some codes listed in the Louvre Library or works of art in the Louvre Gallery. Or you might just have the knowledge, because you’re cultured, damn it. A clue might ask about Macbeth and you already know the answer, so you don’t need to scribble notes down and hop over to the gallery to research it. This made our first game extremely imbalanced against one of the players.

When you have a clue card to look at, you can write down all the notes you want on your bit of paper, but you need to be quick as you have to hand it back as soon as it’s your turn again or someone lands on your space. If you didn’t get everything down then you have to circle around and hope to get that exact card again. Also you want vague notes, as people can play depository cards to peek at your notes for 30 seconds. I decided to use other references to disguise some of my notes, in the hope that the letters “TRU” for one clue would be masked by my writing “Calling” and no one else would get it.

If you’re on a Louvre space, you can look at the whole deck for the Gallery or the Library, depending on where you’re next to. It’s dizzying at first, especially if you don’t have clues to research yet. You have thirty seconds to look at them, much like with the depository cards and other peoples’ notes. I found my hand filled with depository cards which proved unhelpful as people had notes as minimal and vague as mine.

Well it’s not a terrible as Lost

I played a couple of games of this. The first was the imbalanced one and it was fine. There was a lot of pressuring people to take taxi or depository cards, also to rush your turn to force someone to stop taking notes. The second game was a bit more evenly-matched with me, Emma and Saffy, although I found myself stuck on one half of the board for a while, taking utility cards and having other people grabbed the clues. By the time a space on the other half of the board didn’t have a utility card in its spot, I jumped over and Emma finished the game, saying she had the code word. 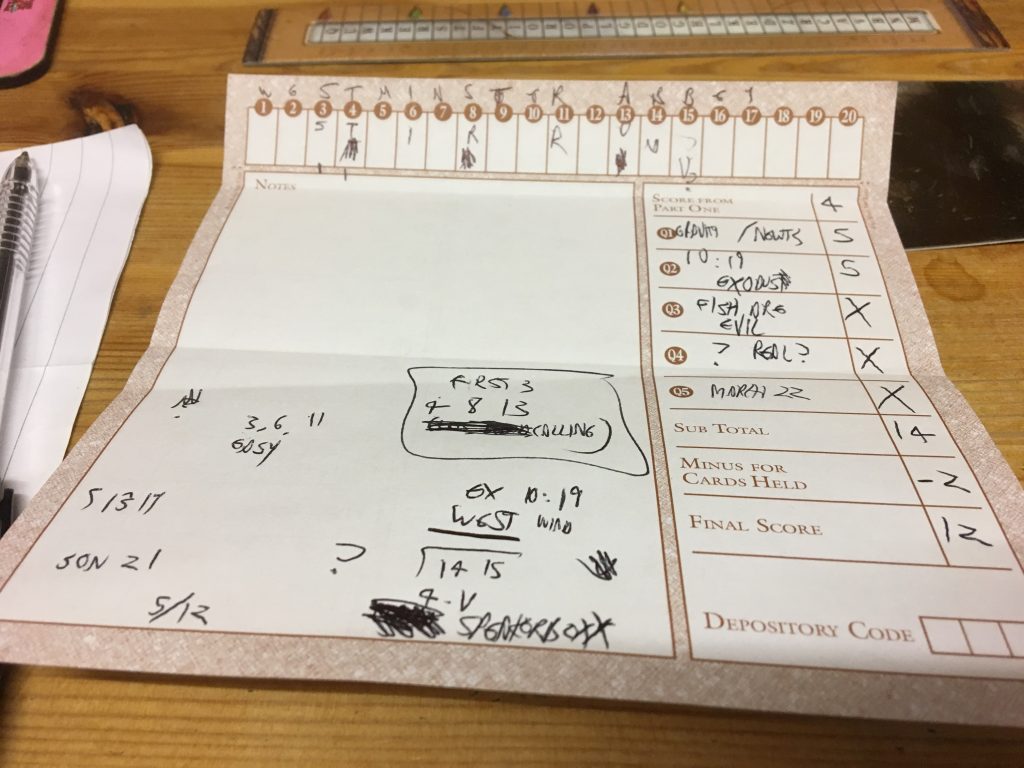 If you think you can solve the puzzle and say the code phrase, then we check and if it’s right, well done. You score a point for each correct letter or (intentional) empty space. Saffy and I didn’t have anywhere near as many letters. The section with the code words also has five questions which your written notes should have the answer to. Each of those scores five points and we hadn’t had a chance to work out all of them, so the answers were about 50% clues we’d found and 50% general knowledge. Saffy scored 11 points, but evidently had fun drawing on her notepad. I had little in mine aside from a few numbers and TV show references, but had 12 points. Then Emma knocked it out of the park with 35 points. Truly she is the real Da Vinci, as I’m guessing happened in the book.

Overall I found myself in the same position as I was in with some of Lost’s mechanics. There were some good seeds of ideas and if I was keeping it I’d definitely want to try the team version at some point to help pool knowledge. It inhabits the same space as Robot Wars as not being as terrible as Lost, but not toppling Ground Force as the king of bad licenced games found in charity shops.