previous
Scythe
random
next
24: The DVD Board Game
Board Games
4034 views 0 likes 0 comments 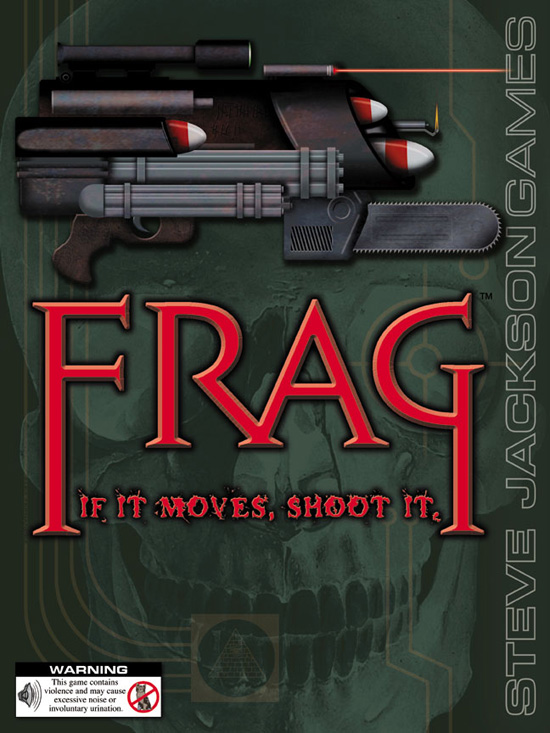 Frag – the first person shooter board game. If ever there was a game where the concept was a simple one, this is it. Its tagline says it all ‘If it moves, shoot it.’

Produced by Steve Jackson Games, with the original edition released in 2001, the game channels classic old-school First Person Shooters. This is not the Call of Duty like, frenetic class-based shooters of today with load outs requiring constant tinkering between games. No this is old school Quake or Doom. Enter the arena with your trusty pistol and grab as many massive guns, explosives and sharp sticks as possible before the other players get there first.

The original edition came fold out maps, thin card components and playing pieces, as well as a plethora of cards representing the various collectables from the game (more on those later). The latest edition, ‘Frag Gold’ is a much sturdier affair with a rugged game board and 6 plastic miniatures (we substituted ours for suitable sci-fi miniatures from our collections, because duh!), and some wipe clean player cards (which is a nice touch). 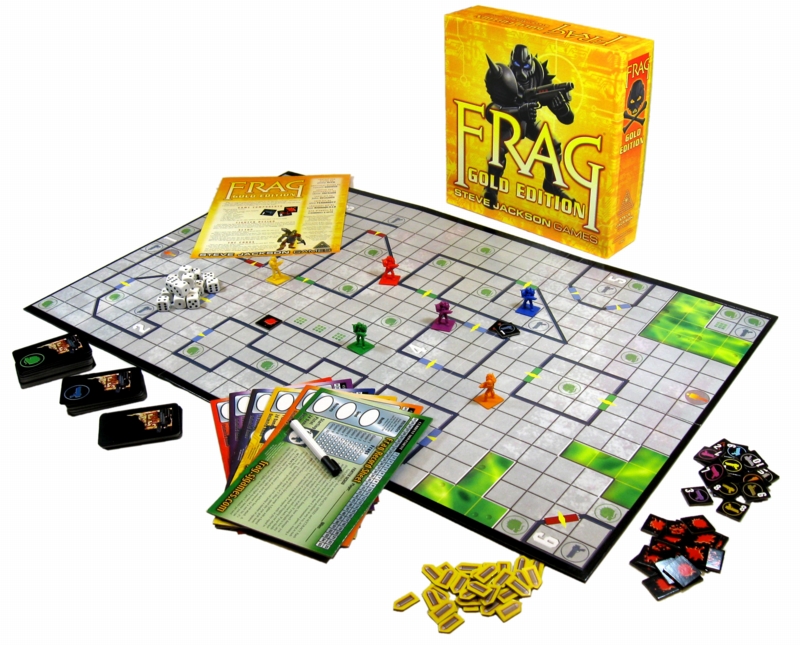 Before starting, players divide 7 points between their statistics – Accuracy, Speed, and Health. Each represents the number of dice you roll for shooting, moving and resisting damage. Furthermore, Accuracy tells you the number of times you can shoot in a turn (divide your Accuracy by 2 and round up), and Health is the number of hits you can take before you are ‘fragged.’ Each player grabs one each of the Weapons, Gadget, and Special cards before being placed at a spawn point on the board. 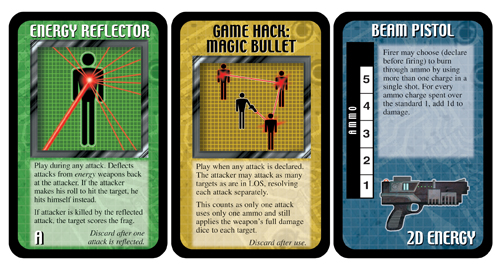 As players move around the board, they can pass over spaces with icons which equate to the Weapon and Gadget decks roll a 4 or higher on a dice, you can collect the equivalent card. The Weapons are a manly collection of the now classic no-nonsense garden variety shotguns, chainsaws, and missile launchers – with a scattering of exotic doodads like lightning blasters. Gadgets likewise keep it old school with – armour, med-kits and force fields.

Special cards are unique events that represent the impact of the computer system and servers on the game which was all very meta before that was a thing. These include upgrading your system, software glitches or cheat codes that can be utilised. They can only be picked up after you have ‘fragged’ an opponent. As a result of the rarity, they tend to have very powerful effects – like walking through a wall with a No Clipping cheat or even fragging another player when their system disconnects (although this does not count towards the final score).

During a player’s turn, they will re-enter the game if they have previously been fragged, appearing on a random re-spawn point. They can then move equal to their movement dice result and shoot at any point of their turn. To hit, players must roll dice equal to their accuracy getting equal or higher than the range to their target. The damage is a fistful of dice equal to the weapon’s value, with the defender rolling dice equal to their Health (alongside any armour). You divide the total damage by the health rounding down and for each point remaining your opponent loses Health. At 0 Health they are fragged. The first player to score three frags wins the game. 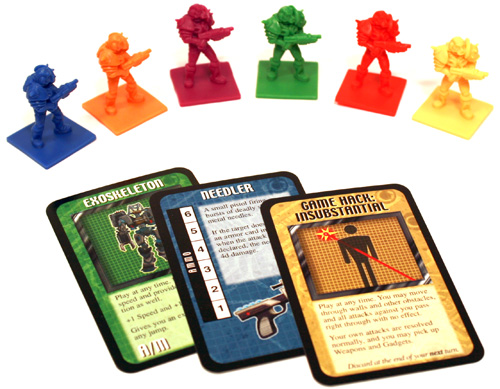 You may look at Frag and consider it a game that is very luck dependent, which is entirely correct. There are strategies for moving around the map and not being caught out in the open, but ultimately you roll dice and pray. Compared to the more sophisticated mechanics of modern board games this could be off-putting, but I find it captures the chaotic feel of the old style arena shooters where death could come from anyone and anywhere. Even the dreaded roll to move sort of feels right – any gamer will tell tall tales of that desperate dash to cover that was either misjudged, or the timing wasn’t quite right. A high-Speed roll will often prompt a sudden explosion of violent action, as a lone fool breaks from cover offering themselves a juicy target for everyone else.

Like its 32 bit brethren, the game can encourage camping with players loath to leave their believed ‘safe zones’ with all those juicy icons. You are limited by what you can carry, both in weapons and the number of cards in your hand, so this does discourage players loading up with a dozen different guns before venturing out. Key cards and the ‘No Clipping’ cheat mean that the one-way door protected ‘panic room’ may not be as safe as first appears. We introduced some house rules to ensure that hovering on an icon collection was not encouraged.

Let’s be honest – the damage system is a somewhat clunky and mathy affair. With guns that have damage values of 7 or 8 dice and cards that can double those outcomes, add to scores or alter the dice rolled the frenetic action this game seeks to encapsulate can often turn into junior accountancy course. My advice to anyone playing this for the first time is to ensure that a calculator to hand.

And then we come to the final issue with Frag – the dreaded ‘analysis paralysis’. We have all played with people who will plot their turns to excruciating details, and this is one of those games where it can set in. Trying to work out the safest route within the boundaries of the dice you rolled can be a snore fest to other players, especially as it doesn’t really fit in with the knockabout theme of the game. This should be a game about sudden reactions and itchy trigger fingers one ponderous Euro player can kill the theme instantly. 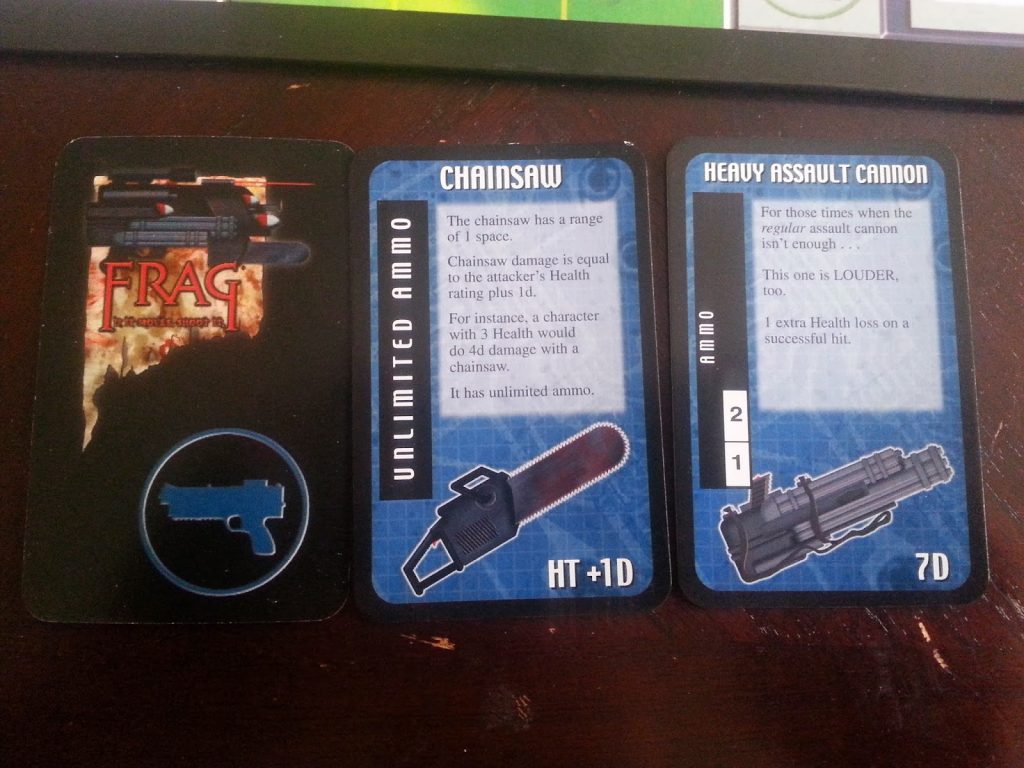 However, putting these quibbles to one side, there is a very easy to access and fun game here. The rules require minimal explanation, and you should be able to get people playing within a matter of minutes of opening up the box. And the good thing about this simplicity is that it doesn’t devolve into a repetitive game experience, as the random re-spawns and pick-ups give you plenty of options for causing as much destruction as possible.

It is unlikely that a match should run over an hour – I’m looking at you Mr. Thinky (slap them and tell them to play in the spirit in which it is intended). Players that sprint off to an early lead often find themselves hunted down by the others (and with maps featuring lava and acid – there are multiple ways to stop people getting that third kill). Most games devolve into a manic melee with players desperately chasing that final kill to end it all. Fortunately, this discourages turtling, once someone is getting a bit too close to victory, you can be certain any pacifist tendencies soon leave the room.

Frag is light, silly and fun. It’s not a stone cold classic, and its rules do at times need a little tightening up. But if you’re in the mood for some sudden and violent retribution against some friends with a playtime under 30 minutes then you can do a lot worse than gathering everybody around a table and Fragging the heck out of them.