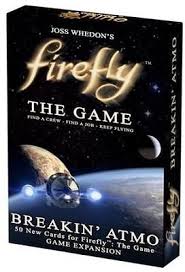 More cards for a game already bulging with them. The new editions to the jobs and equipment add a few subtle but cool new mechanisms to the game. Only reason to hold off currently is that this set will be included in the Blue Sun expansion due late 2014.

Breakin’ Atmo is the first expansion or booster as Gale Force Nine are calling it to hit following the games release. This is a tiny little set consisting of 50 more cards to add to the already card heavy base game. Loving the Firefly game down here at Who Dares Rolls towers and any excuse to fit in another play will always be welcome.

So whats in the box, well we get 25 new job cards and another 25 new bits of equipment and other goodies. As I said its pretty light but all of these cards have just the right amount of a twist to the base game that shuffling this set into your already pudgy decks will more than add to the fun. 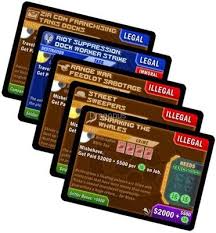 The job cards all come with an interesting new mechanic which is skill based pay. All of them are now loaded with a flat rate which won’t let you retire but with a modifier of a additional payment of a set amount for each type of a specified skill. This simple little mechanic now gives you the chance to really hit some very nice payouts both early and late game.

I do tend to favor a morally dubious business practice whilst out in the black, and a crew armed to the teeth and bolstered by a bunch of Mercs can now mean a serious payday when you bring one of these jobs home. 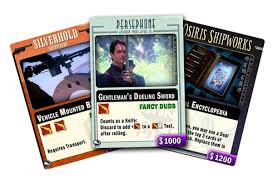 The supply cards are no less interesting, with the usual assortment of crew skills but all these guys either come with a bonus when used on certain jobs either dishing out more cargo or contraband, or coming already equipped with nice shiny things. There are a bunch of other kit a few or note are.

A universal Encyclopedia that allows you to sneak a look at the top 3 cards of the misbehave deck and stack them back how you want. pretty damn useful if your about to make a run at this nasty deck. There’s a bunch of new weapons that come with re-rolls or more than equipment type.

And another cool little card that just playfully uses that hoary old misbehave deck. Its a set of tall playing cards which you pay $500 to activate and draw five misbehave cards and if you get 3 matching suits you nab a cool $1500. I really liked some of these simple editions and I hope we see more of this sort of thing in the coming expansions.

So is this an essential purchase? Well if your a fan of the game I imagine you don’t even need to ask, just buy it already. But I’ll go on the record and say its well worth a look. All the cards throw in either speedier ways to bring in that money and so bolster your crew and upgrade that ship, and lots of cool kit and gadgets some of which help you fill out your equipment faster to take on those misbehave cards and earn the big bucks. One of the biggest criticism’s leveled at the game has been its playing time, so anything that can chip away at that is a good thing surely.

Bottom line if your not a fan this really isn’t going to change your opinion we are not talking water into wine or some other all purpose band aid. This is a solid and more importantly reasonably priced little taster to tide us over before we get our next fix in March with Pirates & Bounty Hunters that looks set to tackle the other bone of contention, the lack of player interaction. 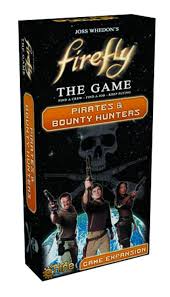 Zombiecide Season 2 – Prison Outbreak
Be the first to comment!
Leave a reply »