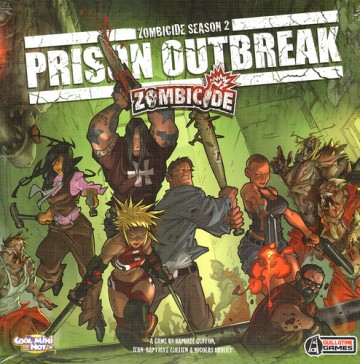 Lots of high quality components and miniatures.
Easy to teach and play.
Hugely entertaining with the right group.
The XP mechanism.
Sandbox style game, you can easily build your own custom scenarios.

Expensive.
Games can run very long.
Theme has been done to un-death.

If you are a fan of Left For Dead and want a big ameritrash style game jammed with quality miniatures and simple mechanism's then you'll be in zombie hog heaven. If you're looking for a deeply thematic experience best wait for Dead Of Winter.

I’ve long avoided Zombicide, the price has been one factor it runs into the serious gamer’s budget area making attaining a copy a special treat and less an impulse buy. I’ve occasionally glanced from afar but in all honesty I wasn’t that enticed, sure there are all the great looking mini’s I mean this box contains more plastic than Cher and it obviously had something going for it the Kickstarter’s have made enough to fund an actual Underground Volcano Lair but something just didn’t light my fire. Probably the biggest reason it remained off the list was it didn’t really capture what I love so much about the Zombie genre, the twisted mirror that these can reflect onto humanity’s base desire to be dicks to one another just to get Twinkies or a shopping mall all to yourself. And if I really wanted to shoot zombies for two hours there was always Left For Dead.

So spin forward to the UK Games Expo this year and Graham a member of my local group managed to snag a copy of Season 2 in the bring and buy for a steal and later that night we settled down for a game. At around the hour and a half mark when I wiped out about 50 zombies with a Molotov cocktail and the table erupted in roars of joy and hilarity I knew I needed this game in my life. 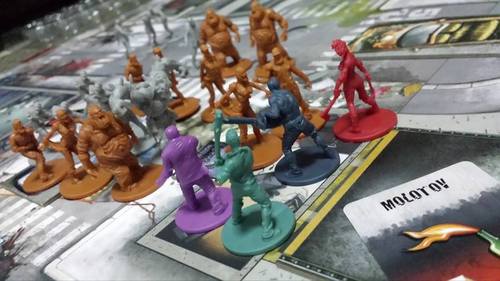 Zombicide encompasses everything I hate about how the zombie genre is handled in gaming, instead of nuanced comments on our society its the equivalent if Michael Bay designed board games, slick, manic, deranged incredibly violent and so over the top you’d need a really big ladder to see over it. But much like some of Bay’s output its also hugely entertaining despite the ridiculousness going on in front of you. So Zombicide is the Bad Boys 2 of Zombie board games, I think that’s what I’m saying.

So yes, there is nothing subtle about Zombicide but it does have a huge amount of shiny things going in its favor, those miniatures we mentioned earlier for instance, there are dozens of finely sculpted and detailed figures the quality of them are all exceptional. Actually point in fact all of the components are the best your money can buy no expense has been spared in the whole venture, there’s a lot of bang for your buck. 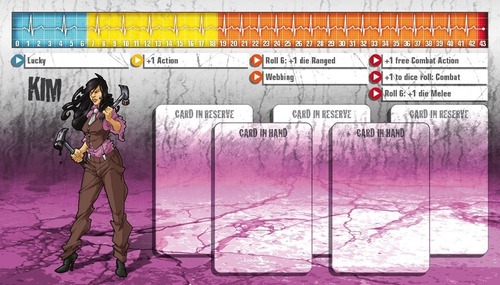 One of the games strengths is its accessibility, if came as a surprise to find just how simple this thing is. You place the boards dependent of the scenario you intend to play and then bang you’re off. Everyone starts with 3 basic actions that can be used to walk about, kill things, interact with stuff  or search and that’s it. What really brings this game into its own is the XP mechanism, as you kill zombies a little meter on your player card creeps up from the blue level to the yellow and so on, whenever you ding! one of these levels you get to choose a new ability and soon it becomes terribly addictive to want to hit that next point, but and this is a big but, there is a consequence to this joyous fun.

The zombies are spawned at the end of every turn and they spew fourth from predetermined spawn points like the never ending chorus line of face eaters from the movies, how many is dictated by spawn cards. These innocuous little things have colored levels just like your XP track and as soon as a survivor dings! then that next level of spawn is activated, and things get much worse for everyone.

I’m sure you can see how that goes, especially if you’re trailing on the leveling stakes its not going to be a great day. 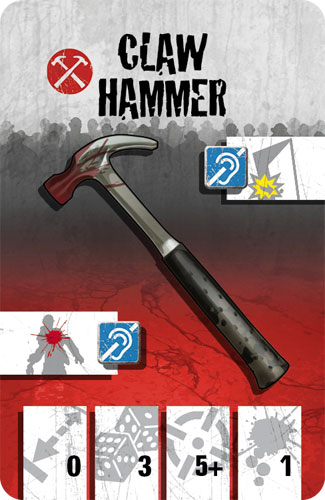 The combat system is another strength, as 90% of the game is all about mashing rotting heads a convoluted series of tables and stats would have killed this faster than a big breasted blonde in a slasher movie. Each weapon has a corresponding card which lists all of that weapons stats, its range, how many dice to roll for an attack what number will count as a hit and lastly the damage it causes. The damage is a breeze to handle, all the basic zombies require 1 hit to kill so there are no stacks of damage markers, you simply grab a stack of dice and roll and for every hit then that’s a kill. There is no greater joy than dual wielding hammers or samurai swords and charging into a mass of undead party poopers and reducing them to zombie sushi. Now there are a some zombies that have higher wound scores that require you to find the weapon that hits with enough force to kill them the Abominations are the worse, requiring a weapon with a hit of 3 (of which there are very few) when one of these spawns its time to run.

Another nice touch is the noise rule, certain weapons will create noise which is shown by a yellow hazard 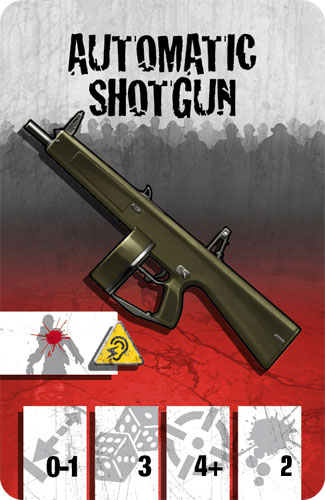 counter placed where you are when you use said equipment, if the zombies can’t see a victim then they will flock to these areas on their move. Now than can be used as a tactic to draw them to parts of the board, but also an over excitable player with their first chainsaw might just get a bit carried away and that can be an awkward moment.

If I have issues with the game its the length a scenario can take, even the smaller board set ups can see a game running to the two or more hour mark, and whilst its a hoot whilst you are playing there is the possibility of outstaying its welcome. Also the danger is to start playing by committee, the fun comes from everyone doing their own thing and I have had a couple of games where everyone has become obsessed with over thinking whats going on, there are strategies to levels but to treat it like a game of Diplomacy really sucks the life out of this thing.

All of these niggles fall away faster than a fat kid on a mountainside once you’re in your pimp mobile and roaring down the main street beheading zombies willy nilly with your chainsaw whilst hanging out the passenger window, there is a childish glee to it. Earlier I mentioned Left For Dead and If you’ve played that and enjoyed it then you’ll going to equally love this, its basically the video game as a board game. And with the spawning of the zombies it turns almost into a Gauntlet style version of the zombie game as you cut swathes into the hoards giggling manically as your friends look on in horror as you ding! two levels above them. Surrounded with a like minded table of souls you are guaranteed a fun evenings slaughter. 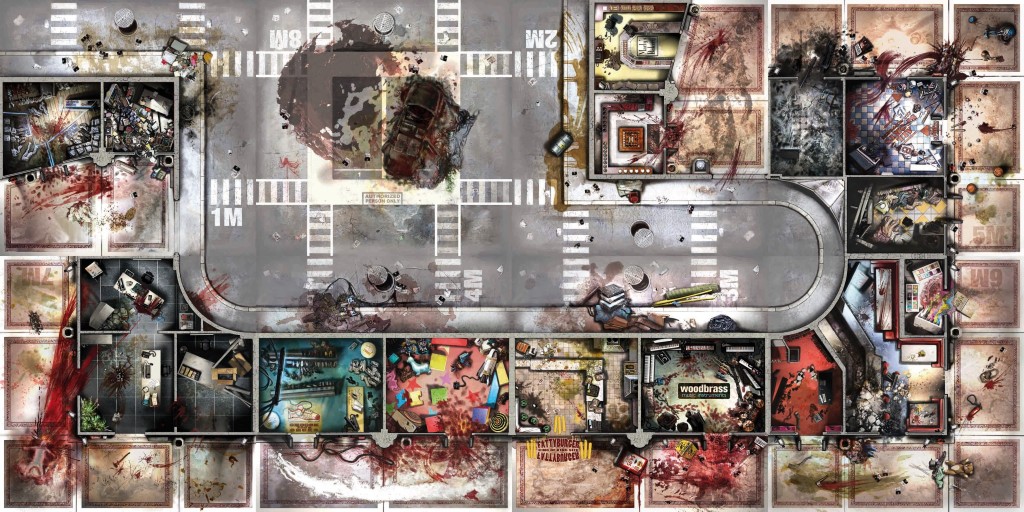 So should you get this? Well if any of what I’ve said above excites you then yes, if you can swallow the price you’ll get your moneys worth and with sand box style of this game you can go on inventing your own scenarios or campaigns long after you exhaust the ones supplied, Cool Mini also have a neat little map editor you can download and use to make these on their site. Its also a modular game so you can pick any of the big box starter sets and you have a complete game, you can then choose to add the others if you want.

So despite all of my earlier misgivings I really enjoy this game, taken as a rotting slab of quick and dirty mayhem then this is a hoot, its a surprisingly tightly designed and clever thing with a flexible rule system that you can house rule to your own groups requirements to maximize your evenings entertainment. Would I get more? possibly I still have a lot of game in this box to play and I don’t see me exhausting it anytime soon, but damn some of those new mini’s look cool.