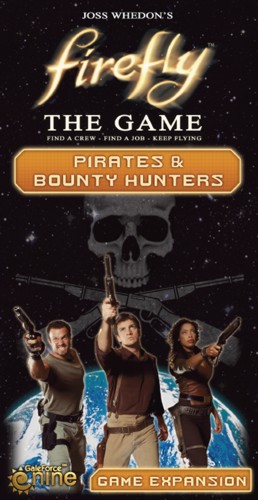 PVP - there's a lot more meanness in the verse now.
Potential to extend play time to even longer.

If you're already a fan of the game chances are you have this already. If you've been on the fence then this does add that interaction that was so sorely missed in the base game, however with that does come an extended play time.
Firefly is one we love and is now more than ever our go to lazy Sunday afternoon game, this expansion adds some much welcomed bite to its leisurely lope across the verse.

Firefly The Game hit tables around a year ago at Gen Con shifting stash fulls of games and proving itself to be quite the dapper gent, its a bit of a monster having a board presence to rival the verse and a gravity inducing pile of components, it drew some cries of discontent over its season running play time and lack of player interaction. Despite that It’s become a regular visitor to our tables being as we love the show and its always fun to return to the verse for a bit of derring do. 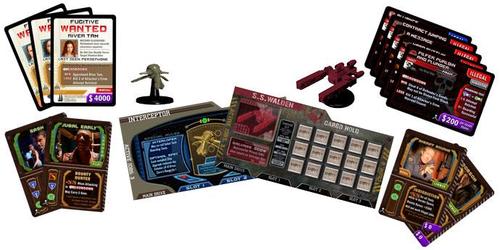 Pirates & Bounty Hunters is the first proper expansion for the game and it focuses on tackling the big issue and one we brought up in our original review the lack of player interaction, it does this by squeezing in two new options for you when you are out and about doing your space captain thang.

This module adds 5 new cards to each of the jobs decks, these give you the means to attack other players and rob them blind of any cargo, fuel or parts they are carrying. It involves you completing a boarding test using one of the skills dictated on the card to see if you are successful and then both crews meet in a showdown, showdowns are resolved by each captain choosing a skill and duking it out to see who has the higher score, if successful then the attacker can take however many goods the card said and get a cash bonus dependent on the job. If they screw up then it will usually result in the death of one of the attackers crew.

This deck of 20 features a bounty for each of the characters in the supply decks with the alliance wanted symbol on them, at the start of a game three bounty’s are placed face up. You now have the option of tracking these culprits down beating them in a showdown and then taking them to whever the bounty can be collected. There is also the option for players to bounty jump and snatch these prized miscreants from rival ships for their own ends, and I imagine you can see where that will go.

In addition to those new rules the expansion also comes with a bunch more supply cards mixed between new shiny equipment or crew members, including Lawmen who have bounty multipliers to help boost those jobs and 3 new story cards that focus on these new modules. Also included are two new ships the S.S.Walden a big slow cargo ship that you can stack with cargo and the Interceptor which is a tiny little thing but it can zip around like a mosquito at a BBQ.

So what does this all mean for the game? Well for starters it achieves what it set out to accomplish and adds a great new level of manic PVP joy to the game. The story cards that come with this expansion give you a chance to try out these new found toys and are best used to get you up to speed, one of these features the option for Havens which are essentially bolt holes where you can’t be messed with, handy as with these new rules games can descend into a sort of intergalactic game of tag. The piracy jobs add a mischievous new level of uncertainty, when you see an opponents ship heading your way and you’ll trundling along with full cargo bays it does instill a level of panic suddenly its no longer one big happy verse. More than once in our games ships parked up working jobs were suddenly hit by some nearby carpetbagger who swooped by and nabbed their goods, resulting in a benny hill style chase across nearby space and much fist waving. During one game Trixie spent the entire evening using everyone else as mobile gas pumps diving in and siphoning off our fuel before hightailing it out of their leaving us puttering along on fumes and harsh words.

The bounty’s also add another new level of mischief my tactic being to bounty jump from fellow captains which resulted in numerous failed attempts and dead crew. In time once these new shiny toys have lost their edge I’m sure they will find their place in the bigger game, but for now its been a refreshing change of pace to proceedings. 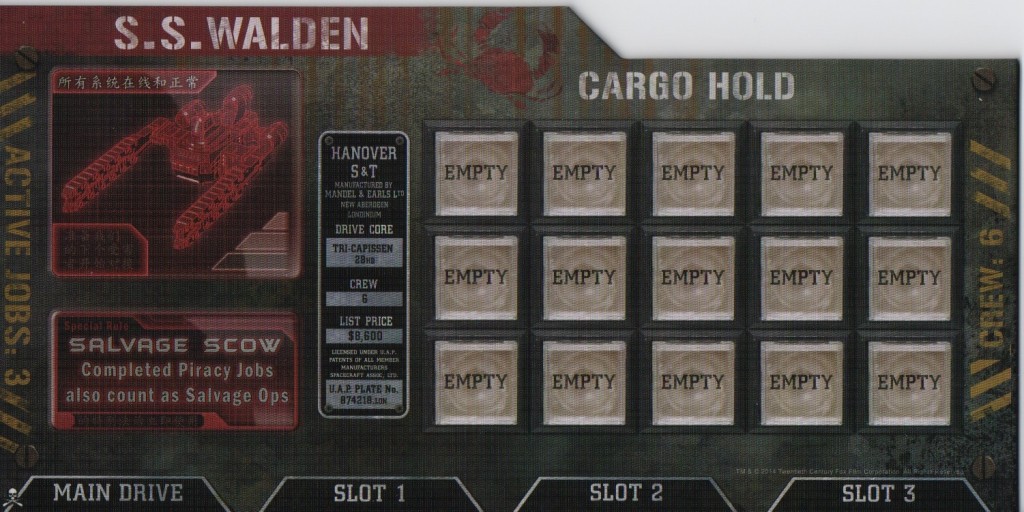 The new ships are still up for debate, whilst its great to have something else to pilot they are both very different beasts to the firefly’s. The Walden with its pondering pace and lack of stash does make it a bit of a target for pirates unless suitably crewed with an army of cut throats, it does come with perk that completed piracy jobs can count as salvage ops, so with the right crew you could stack some serious modifiers and boost your earnings.

The interceptor is also a strange one, its speed and lack of requirement for fuel to initiate a full burn is pretty cool, but it also means that you are tearing through those nav cards leaving you open for some nasty surprises. There is also the fact it only has a cargo hold with 4 spaces, making it really a ship specific for bounty runs or jumping fellow captains.

For us this is a hit, loving the new ways to play and with a few simple mechanisms its added at lot more to the base game. Now it does have the potential to add more length to a game that was already a time hog, but the new options and entertainment they bring means that you’ll be more invested in what everyone else is up to. And with the Blue Sun expansion announced for limited release this Gen Con and with wider release in September, we’re gonna need a bigger table.