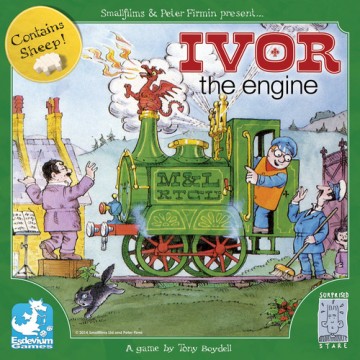 Lovely artwork throughout that captures the TV show.
There's a lot more game in this box then you'd think.
Sheeples! Lots of em.

To the ill prepared this can be brutal place.

Fan's of Ivor will lap up this jaunt back down those happy childhood tracks, just be prepared for a surprisingly brutal game simmering below the charming art.

Ivor the engine is one of those warm childhood memories that sort of settles there all sweet and gooey like marshmallow’s on hot chocolate. I recall from childhood impatiently waiting for John Cravens newsround to get done with all his grown up news malarkey so I could catch up with the further adventures of the little green engine. I can’t put my finger on what exactly drew me to the show, maybe it was the quirky stories filled with strange Welsh names or Peter Firmin’s incredible eye for art and design, it was different there always seemed something melancholy about Ivor, maybe it was the grey streak of the welsh skyline or the rolling desolate hills he traversed, it wasn’t like top cat, and I loved it.

When I received word that a game was coming based on Ivor I was sold instantly, to then learn that Peter Firmin the artist and genius behind that unique look that Ivor had would be supplying some original work to the project I did a little happy dance.

Now i’ll be honest I really didn’t imagine there being much of a game, I fully expected simple light children’s fare such as you might find littered among the piles of garish Disney licensed knock offs in the big high street stores. I probably should have paid more attention as Tony Boydell was designing, and he did a none too shabby job with Snowdonia, which coincidentally (or maybe not!) is also set in Ivor’s old stamping ground. 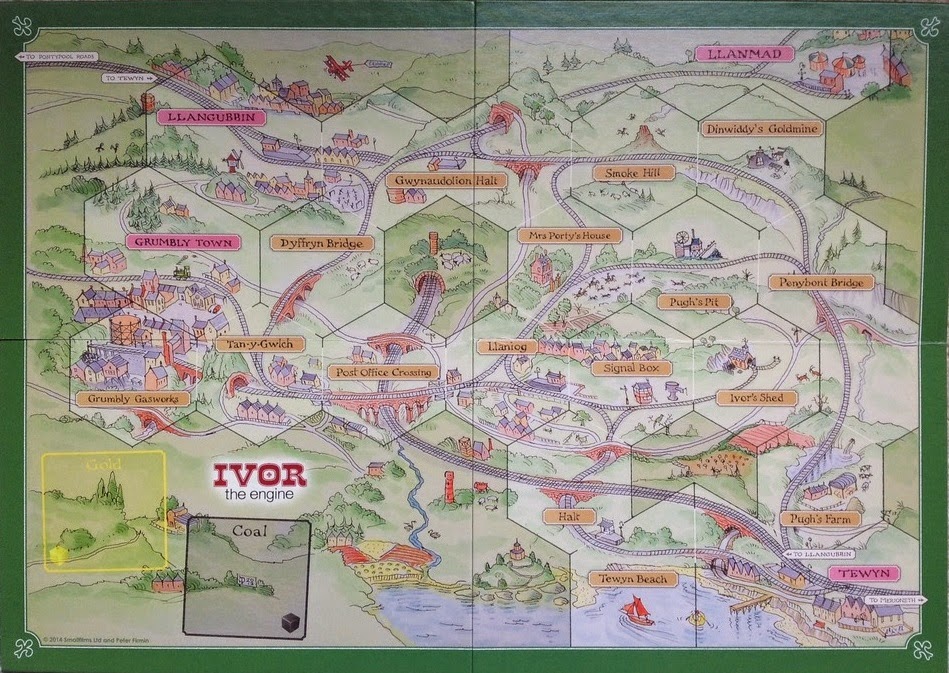 And at first glance Ivor is exactly the light and kid friendly experience you would expect, players spend the game rounding up lost sheep (sheeples) from across the welsh countryside and completing job’s for the roster of episode regulars. But this is Ivor by way of David Lynch, because simmering below the surface of each of the games job cards is a darker more brutal unforgiving experience.

To explain lets just run through how this plays, the goal is for players to collect the most lost sheep, your actions on a turn are to collect a sheep if their is one in your starting location, and then you can play cards from your hand and move to a new location. Scattering the board are also lost sheep tokens and if you collect the last sheep from a location containing one you also gain 2 bonus sheep. The cards used during the game have two uses, at the top of each is a location on the map and small explanation of the job you will complete to be awarded extra sheep, you can only complete these jobs on locations that have been emptied of sheep. Its the second use for these cards listed in bold at the bottom that starts to cause the problems, the cards you see can also be used to carry out an action, maybe to take sheep from certain locations or put some more down, fairly innocuous at first glance but on closer inspection this is where the fun begins.

One of the family has just finished nibbling on their afternoon tea scone and nonchalantly trundles their little truck to a location with the intent of taking the last sheeple and collecting that lost sheep counter on their next turn, thus helping to fill their pen to bursting, well no sir that won’t happen, you see you played a card that stole the sheep and removed that bonus token with it or maybe you put extra sheep on that space completely invalidating whatever strategy they were attempting, they look over with a pained expression and turn their gaze to their own cards and promptly respond with a similar dick move.

And its not just the card actions that can cause dismay, at the end of your turn you can pick a fresh card from four on display, after the first couple of turns all eyes on the table will be looking for those actions, or even to take a job that will cut off an opponents rush for glory. Nestled among the deck are also event cards that effect everyone when they surface and offer some multipliers to your final scoring to add another sting in the tail.

Ivor can be played as a quick family time burner and is an enjoyable experience if slight, but in the hands of gamer’s or the terminally malcontent it evolves into a brutal war of escalation and consequences, in the Who Dares Roll’s household we only ever play to win, and it’s still surprising just how vicious an 8 year old can get when denied his sheeple and left with a hand of cards practically making them a cold war superpower. And its shocking even now just how quickly the terrible little gits can go from wide eyed lolly sucking to Bond villain within one turn of the game.

So if you have no prior knowledge of Ivor then shame on you, rectify that issue immediately by a Google search and copious use of You Tube, then once correctly educated you can dive into the valleys for some good old fashioned family feuds. This is a lovely little game, with some charmingly disarming art and simple but mischievous game play and is most certainly going to find itself coming back to our table for many repeat plays. And whilst the spirit of Ivor is layered throughout the game and the art, it appears that the parping and chuffing little engine of my childhood has become a thoroughly awful old git.