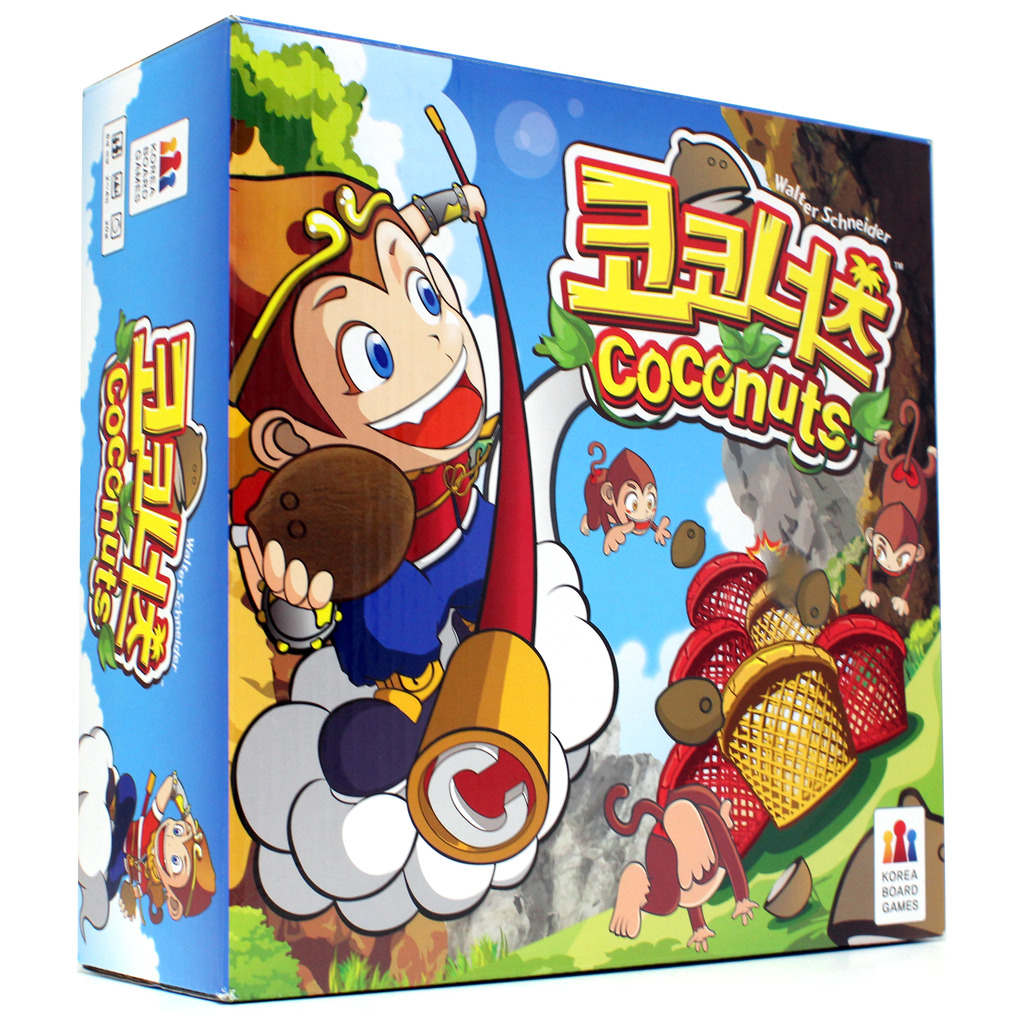 Card stock quality poor.
You might lose your coconuts.

This is a ridiculously stupid but brilliant game. Anyone can play it, only game snobs will turn their nose up at this. It truly is the new Loopin Louie. Can't big this up enough.

Coconuts is a truly silly game. I’m a grown up gamer, I have a dog and a house and a wife and things. I grew a gorram beard, what possible use would I have for a dexterity game involving monkeys flinging poop shaped lumps of brown rubber. I mean really!

But it did look a little bit interesting. I managed to put these childish impulses aside and went and played some Terra Mystica (the equivalent of a game cold shower), just to straighten myself out and feel all proper gamey and less like a giddy school child. And then what do I stumble over at a booth at the recent UK Games Expo but the bloody Coconuts game, and like a fool I sat down for a play.

So like every home should have the coconuts game. I could spend a couple of paragraphs explaining the rules but really I think that this video sums them up perfectly in a fraction of the time and is suitably deranged.

Everything about this game is just about perfect, the monkey poop flingers are really well designed and put together, the mechanism can be shot at differing levels meaning there is a skill to this and not just hitting a plastic hippo repeatedly for five minutes. The little coconuts add a nice randomness to proceedings, being rubber and misshapen they can bounce and veer off from your intended target meaning there is never a guaranteed hit. 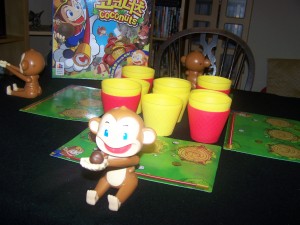 There is also a simple catch up mechanic in the red cups, you land a coconut into one and you get another shot and similarly when you do get a leader they are hobbled by the fact they have to stack their cups up in front of them, creating a wall they have to shoot over limiting what they can easily aim at. And another neat turn to events is that you can steal opponents cups by deliberately or inadvertently getting a coconut into one of theirs, so as soon as you get a runaway leader a lot of monkey poop will be flying their way.

There is also an optional set of cards in the box that can be added to mix things up a tad, everyone gets two and they have a mixture of powers, either extra turns, or that make you shoot from further away, one even allows you to blow in a pitiful attempt to redirect your monkey enemies shot, as I have the lung capacity of a 60 a day smoker I manged to get a head rush and covered my youngest in spittle without actually disrupting anything. 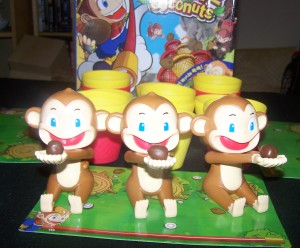 This is a quick and simple game, if you have kids they will love it, if you secretly clamor to recapture those wild days of your youth spent idly looping your Louie then you are going to be in gaming nirvana. Its silly but just fun and always see’s replays once its out, most importantly this is all about the fun of playing together, which is something that sometimes gets forgotten in a rush of dice rolls and deep strategic thinking.

So Coconuts then is the gaming equivalent of a enema, feeling a bit backed up on Euro’s and thematically swollen mega games? Get a poop flicking monkey in your life and release that game stodge that is weighing you down.

Space Cadets – Dice Duel
Be the first to comment!
Leave a reply »